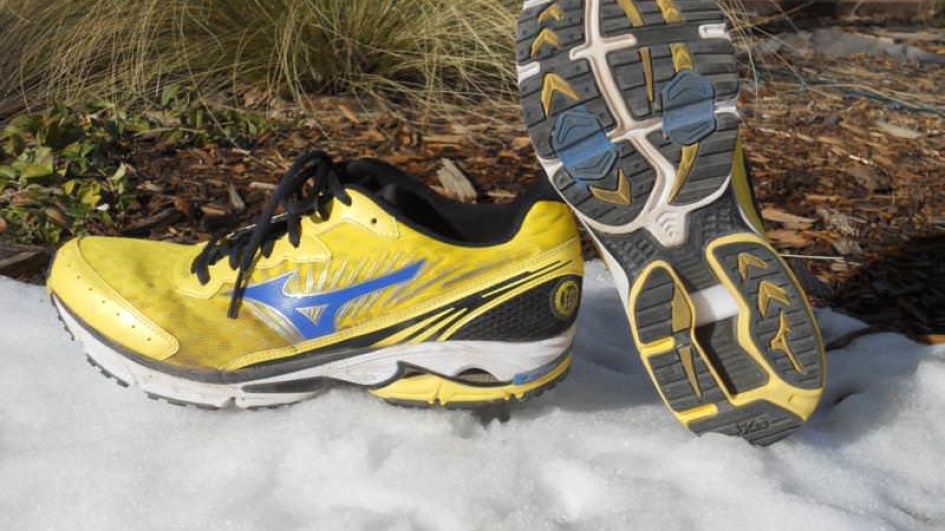 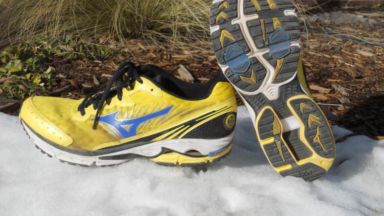 The Wave Rider 16 is a very popular neutral shoe which will accommodate high mileage runners and weekend warriors alike.

The Wave Rider has a heritage that comes with high expectations, as many runners these days are looking for a lot of cushioning in a lightweight package. Have worn the last two incarnations of this shoe, in addition to some Wave Rider models of the past, I was hoping for a more stripped down Wave Rider with a great deal more flexibility. While Mizuno kept the undercarriage of the shoe the same they drastically changed the upper materials to create a shoe that moves better with the foot.

As stated, this is where the most change occurred in the Wave Rider 16. Dynamotion Fit, which is essentially a semi-flexible material through the forefoot to give the runner a better notion of flexibility. My favorite part of the Wave Rider 16 is the upper fit and construction, and most runners will find this upper accommodating with a not-too snug mid foot and wide toe box. Open Airmesh runs throughout most of the shoe with a reinforced toe rand and heel cup. Mizuno is definitely sticking with their tried and true method of making great durable uppers with really zero fit issues.

For those familiar with the Wave Rider 15, the 16 has the exact same midsole and outsole. What that means is that Mizuno combines their Wave technology along with AP+ midsole foam which is a fairly firm midsole compound compared to what one might find on a Nike or Saucony shoe.

However, the combination of this foam with the extended Wave Plate never leaves the runner stiff footed. I would say the best descriptor for the feel of the cushioning on the Wave Rider 16 is protected. One complaint that I have about the outsole is the cutouts in the heel section of the shoe which are weight saving but also invite rocks and mud to stick to the sole.

Road runners will not have issues, but for those of us training on dirt or gravel it becomes annoying to have to pick mud and clay out of a hole in the heel of the shoe. The Wave Rider 16’s heel drop of 12mm also feels precariously high at times given the stiffness of the outsole and runners prone to rolling ankles may want to reconsider.

The Wave Rider 16 is an excellent offering from Mizuno and should be close to the top of the heap for 2013 in the neutral cushioning category. Few shoes achieve such lightweight cushioning in as durable of a package. Traditionalists who appreciate sewn on upper construction with a traditional 12mm heel drop will need to go no further; this is their shoe. However, I would like to see Mizuno break from the mold a bit with the Wave Rider series. Mizuno already makes a lightweight cushioning shoe in the Wave Precision 13 which is a half ounce lighter.

The Wave Rider 16 continues to feel too stiff in my opinion and Mizuno should shorten the length of the wave plate to accommodate a bit more foot movement. If neutral runners wanted to decrease torsional rigidity that much they would be buying stability shoes.

And I digress… Overall, the Wave Rider 16 is a great shoe that many runners will find to be everything they’re looking for in an everyday trainer.

We thank the nice people at Mizuno for sending us a pair of Wave Rider 16 to test. This did not influence the outcome of the review, written after running more than 50 miles in them.

Sorry - Product not found. Please try RunningWarehouse.Com to check in their assortment.
This page contains affiliate links. As an Amazon Associate I earn from qualifying purchases.
WHERE TO BUY
LOWEST PRICE
$115