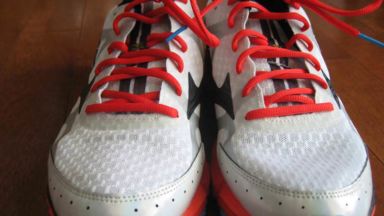 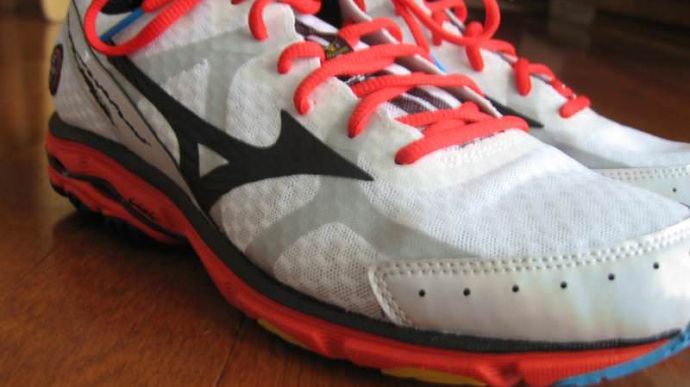 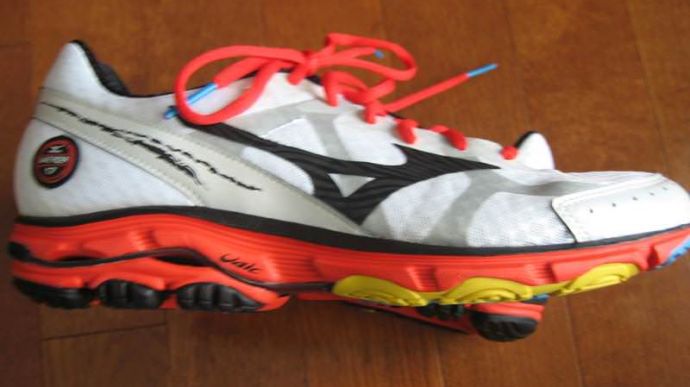 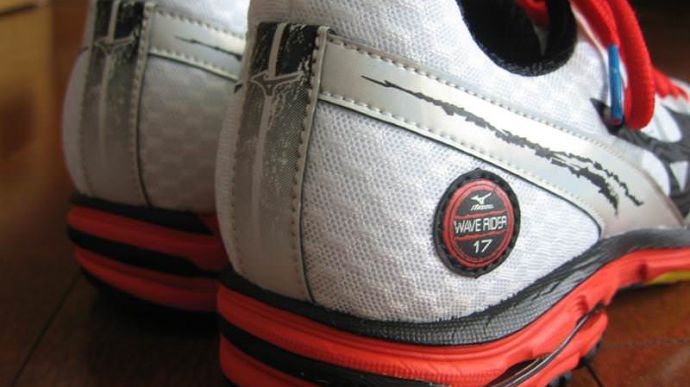 The story with Mizuno this season has been the introduction of their new midsole compound U4ic. Mizuno claims U4ic possesses all the cushioning properties of their former compound, AP+, while weighing 30 percent less. U4ic debuted in Wave Sayonara, and was then used in Wave Enigma 3. Now, U4ic has made its way to Mizuno’s flagship trainer, Wave Rider.

Wave Rider loyalists are probably excited with the prospect of their go to trainer getting 30 percent lighter (WR17 is under nine ounces for a men’s size 9, almost 1.5oz less than version 16). But Mizuno also claims the new weight of Wave Rider 17 is one reason for discontinuing the popular Wave Precision line.

(Of course, Mizuno could’ve used U4ic in Wave Precision, thereby delivering the lightest Precision ever.) This claim had me a little worried, since I’ve liked Wave Rider and Wave Precision for very different reasons. So let’s see what has changed with the Wave Rider 17 and what has not.

Out of the box, the Wave Rider 17 is noticeably lighter than previous versions. But weight isn’t the only difference between Wave Rider and Wave Precision. Wave Precision is a much more flexible shoe than Wave Rider. The rigidity of Wave Rider has made it the ideal trainer for a wide range of runners, from runners with a neutral gait to those who overpronate moderately. So has the weight reduction affected Wave Rider’s rigidity?

Flexing the forefoot in my hands, I’m happy to see that shoe still retains a stiffer, snappier forefoot, which puts it more in line with the Rider line than the Precision line.

Side-to-side, Wave Rider 17 is fairly hard to twist. This torsional rigidity is due to the Wave Plate, Mizuno’s proprietary cushioning technology. Like corrugated cardboard, the Wave Plate is flexible from front-to-back, but stiff side-to-side. In Wave Precision, the Wave Plate was cut at a bias, which gives it a fair amount of twist.

In Wave Rider, the Wave Plate is cut perpendicularly, which makes the shoe inherently stable. This inherent stability makes the Rider a trustworthy trainer, providing support, for both neutral and overpronating runners, mile after mile. WR17 is no different.

It continues the Rider tradition of providing great cushioning and support for everyday training. But its lightweight will also let it double as a race-day shoe for runners who want a do-everything trainer. Having seen that the shoe retains the inherent stability typical of the Rider line, I have to say this shoe is nothing like Wave Precision.

A shoe is more than its weight. Structure and overall fit and feel are as important, if not more. Former Wave Precision fans who were hoping the Wave Rider 17 would indeed be an adequate substitute will be disappointed, I feel. They’ll have a better shot at finding a substitute in Wave Sayonara.

One more difference worth mentioning is the shape of the shoe. In the last few iterations, Wave Rider has had a fairly pronounced upturned toe. The purpose of this upturned toe is to help smooth out the toe-to-heel transition.

But this design also has a downside. It can be fairly uncomfortable for some runners. Thankfully, that sprung toe design has been removed in latest model. The straighter shape of the shoe will make for a wider appeal.

Along with midsole material, the Wave Rider 17 receives a number of changes to its sole unit. The lateral edge of the shoe has been rounded off. The Wave Plate on the lateral side is also modified, giving it a more subtle contour line. Both of these changes, I believe, help soften the impact at initial contact and smooth out the transition through the gait cycle.

Instead of Flex Controllers, the Wave Rider 17 provides this smoother forefoot transition with connected outsole lugs. Mizuno already debuted this redesign in Sayonara and Enigma 3 to great success.

The redesign is also highly successful in WR17. These connected lugs provide that smoother, controlled forefoot experience without producing the hot spots of the clunky Flex Controllers.

One thing that has not changed is the amount of cushion underneath the foot. The stack heights are in line with previous versions of Wave Rider (15 and 16 specifically). The latest Wave Rider may weigh less than previous versions, but it has lost none of the cushioning.

Unfortunately, this means that those who are still hoping Wave Rider will return to version 13 will probably be disappointed. The cushion and feel of the outsole puts the Wave Rider very much in line with versions 15 and 16.

One other non-change that is worth mentioning is the heel-to-toe differential, which is still 12mm. For many runners, the 12mm offset will be welcomed, as some makers have lowered the offset on their mainline trainers.

But I think the 12mm offset will also give some runners a clunky experience in the new Wave Rider, especially those who have become accustomed to the 10mm offset of Sayonara. A difference of 2mm may not seem like much, but I believe the 10mm offset makes Sayonara feel more dialed-in than the Wave Rider 17.

One feature of Wave Precision 12 that I loved was its seamless upper. Though Mizuno has discontinued the line, thankfully it has saved the idea of the seamless upper and has brought that design to all of their shoes. Thus the Wave Rider also features a nearly seamless upper.

Sewn overlays are kept to a bare minimum while structure is provided with heat welded overlays. This upper design provides the foot with a virtually socklike experience.

In Wave Rider 17, Mizuno once again delivers a very successful everyday trainer. Fans of versions 15 and 16 will find a very familiar shoe in version 17, while enjoying the benefits of the lightweight U4ic midsole. This means the shoe will have the necessary cushion and support for high mileage training while remaining light enough to double as a raceday shoe.

Additional improvements like the removal of the sprung toe and the Flex Controllers only add to the experience. Fans of the Wave Rider line, I believe, will be very happy with the 17.

We thank the nice people at Mizuno for sending us a pair of Wave Rider 17 to test. This did not influence the outcome of the review, written after running more than 50 miles in them.