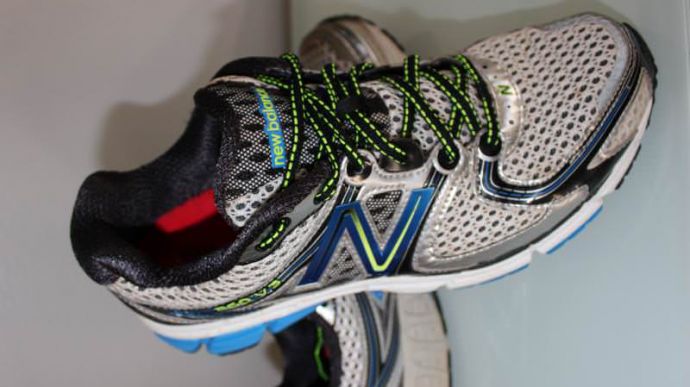 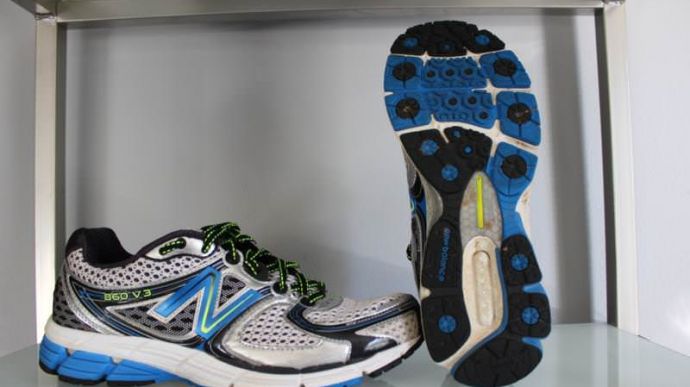 The 860 V3 is the update to the 860 V2 for Spring 2013. This shoe series is designed for the runner who needs extra stability in their running footwear. New Balance has been hit and miss for me with their shoe designs. I’ve liked some of the older stability designs of the 1225 and 1226 while later versions have been increasingly disappointing. Being the good sport that I am, and hoping for a stellar New Balance experience, I was certainly ready to lace up the newest version of the 860 series.

When I first unboxed the 860 V3, I thought for a moment that I had received another 860 V2! The shoe arrived in a very similar and unremarkable silver, blue and black color way just as it did last year. Apparently New Balance does offer the 860 V3 in some racier color schemes but the pair I have is decidedly pedestrian with the exception of the lime green and black laces which are attractive and do add some flair.

The midsole for the 860 V3 has a couple of new features for 2013. New Balance has replaced their Stability Web mid foot shank with a new design called T-Beam.

We saw the T-Beam implemented earlier this year on the 1260 V2 and it is also included on the 860 V3. It serves to shore up the mid foot, or arch, area of the shoe and helps to resist the twisting forces an over pronating foot can generate on footwear. And in the case of the 860 V3, it seems to work pretty well as this shoe is quite robust in its torsional resistance.

The medial posting remains almost identical to the earlier 860 V2 and does a decent enough job of slowing down the inward roll of the foot. New Balance has replaced the lateral N-Ergy pods with a section of segmented Abzorb foam with the goal of providing a smoother, less jarring transition from strike to toe off. The rear and forefoot are still linked by two sections of blown rubber that give the 860 V3 and almost flat-soled look. N-Durance high abrasion carbon rubber is still found in the heel section.

The 860 V3 has quite a bit going on in the upper. Heavy overlays cross the majority of the shoe and do result in a pretty snug mid foot and toe box. The upper fit is certainly quite similar to the 860 V2 and fans of that shoe should feel right at home. The mesh is moderately breathable and the mid foot now incorporates a new material called NuFoam which is supposed to be more environmentally friendly than previous designs. The heel fit of the 860 V3 is fairly open but it did not result in any slippage and the interior of the heel cup is more than adequately padded.

The 860 V3 feels, looks and runs much like the earlier V2 edition. I felt like the arch has been lowered and that’s definitely something I do not like. Also, this shoe has absolutely the stiffest, most unyielding forefoot that I’ve ever run in. The stability remains moderate and the fit is snug in the mid foot and toe box while opening up a bit in the heel.

The 860 V3 seems almost like a throwback given the light and fast competitor shoes that I’m currently testing. Runners who were happy with the 860 V2 will still likely be pleased with the V3 edition. However, the 860 V3 weighs in at over 12 ounces and I’m currently seeing shoes that offer as good or better stability coming in at nearly 10 ounces. I feel much the same about the 860 V3 as I did in my review of the 860 V2; it still feels like a family sedan. Reliable, consistent but not at all sporty or pretty.

We thank the nice people at New Balance for sending us a pair of 860 V3 to test. This did not influence the outcome of the review, written after running more than 50 miles in them.