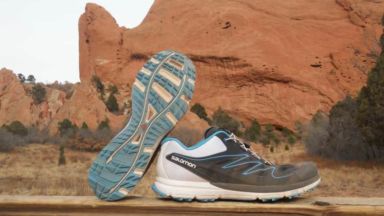 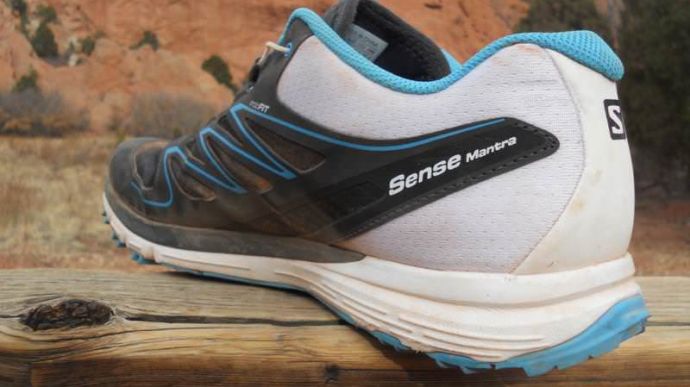 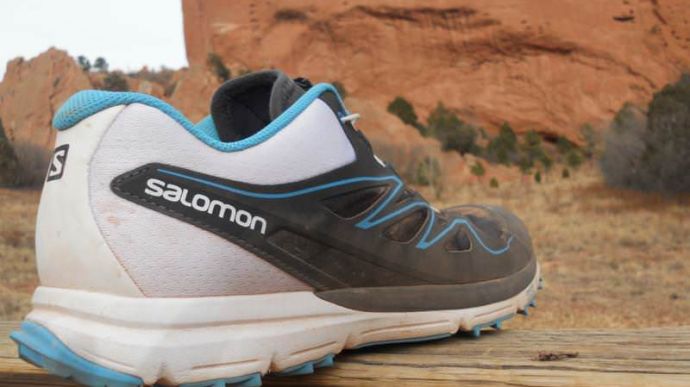 The Salomon Sense Mantra offers great performance in a lightweight and agile package that doesn't sacrifice protection. Great all around trail running shoe!
WHERE TO BUY
LOWEST PRICE
$120
SHOE INFO
Salomon
Brand
Sense Mantra
Model
Trail
Type
9.6 oz (men's size 9) 8.8 oz (women's size 8) oz. (272 gr.)
Weight
120 US$
MSRP
WHO IS IT FOR
Mountain/ Ultra/ Trail runner's looking for a great all around shoe for training and racing.
Help me choose

The Salomon Sense Mantra is a versatile trail shoe designed with minimalist principles in a protective and well cushioned package.

The first thing one notices while first viewing the Sense Mantra is the impeccable detail put into the design of the shoe. Aesthetics and color ways aside, Salomon shoes feature some state of the art technologies you just don’t see in other trail shoes.

The Quicklace system, in which kevlar fibers provide lacing which never comes untied or loose, in addition to the Profeel Film rock plate in the forefoot make the Sense Mantras seem almost futuristic compared to many other trail shoes.

Be sure, usually Salomon’s trail shoes come with a hefty price tag but the Mantra is priced at $120 which is fairly standard for a state of the art trail shoe these days.

The Sense Mantra features a breathable and durable mesh throughout the toe box and mid foot area of the shoe. So breathable in fact, that I often ended my runs with a great deal of dirt and dust staining my socks.

The upper features Salomon’s Endofit technology which give the Sense Mantra a custom fit sort of feel, allowing the runner to feel very secure on technical trails and loose downhill terrain. A rubberized toecap offers plenty of protection on the front of the shoe and sewn on overlays bolster the already secure feeling fit. The fit of the Mantra seemed true and I was able to wear my usual size 9.5 US.

The heel collar is very plush, so much so that I initially felt like my heel was slipping when I first put on the Mantra. I didn’t have any problems with this while running and overall this shoe provides a very locked down fit. For those of you who haven’t experienced Salomon’s kevlar lacing, it can take some practice to get the pressure just right. The plus side of this system is that once the slider is in place and you tuck the laces into the “lace garage” the shoe will never loosen or come untied, even when wet. I will say that I prefer to tuck the laces in from the top, like on the Sense Ultra, rather than tucking the laces in underneath.

Some runners may complain about the width of the Mantra and Salomon shoes in general. These don’t give you that wide minimalist fit that allows for maximal toe splay, but I think that toe box width is right about average for the Sense Mantra and most runners won’t have a problem.

I noticed that the toe box has seemed to get roomier the longer I’ve had the Mantra.

Salomon uses LT Muscle, a lightweight EVA foam to provide cushioning throughout this very simple midsole. Runners who prefer a bit of a more firm feel on the trails will appreciate the low to the ground feeling offered by the Mantra. If I had to give the cushioning a comparable feel I would say that it feels similar to an Adidas road racing flat, such as the Adios. A 6mm heel drop is that perfect height that will allow some runners to transition down to a more minimalist shoe while others will find it allows them to rack up the miles without stressing out their calves and achilles.

Salomon uses their Contragrip outsole which is fairly low profile compared to many trail shoes. What I like about this outsole pattern is that you can climb very well without feeling like lugs are getting in the way. On downhills this outsole has just the right amount of slide without feeling out of control. It is also very durable. However, I do have one gripe about the Contragrip outsole. In wet conditions, such as crossing rocks with melting snow on them the hard outsole rubber looses its stickiness quite a bit.

Probably the best feature of the Mantra, or the technology which most impressed me was the Profeel Film rock plate. Without loosing much flexibility, this rock plate offers a ton of protection for the weight in the mid foot to forefoot of the shoe. I was always pleasantly surprised how I could attack rocky terrain in the Mantra and not get repeatedly stabbed by sharp rocks.

The Sense Mantra is the kind of shoe that minimalist runners will appreciate for longer, ultra marathon trail distances. Your average trail runner, who is used to wearing a highly protective trail shoe will find the Mantra a good fit for those days when you want to run fast or race.

One can appreciate the durability of this shoe when after close to 300 miles it is still retaining its structural integrity, and I feel like then cushioning has more of a “sweet spot” than the first hundred miles I ran in it. The question for you, as the possible buyer, is whether you like the firm feel underfoot of the Sense Mantra.

On soft trails of dirt and clay the Mantra felt fantastic, but on solid rock or very hard trails my feet often wished for a bit more cushioning. Either way you can’t go wrong with this Mantra from a performance standpoint.

We thank the nice people at Salomon for sending us a pair of Sense Mantra to test. This did not influence the outcome of the review, written after running more than 50 miles in them.