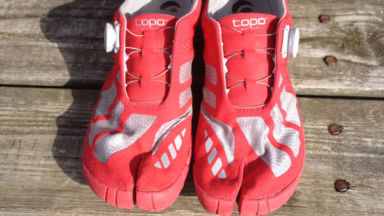 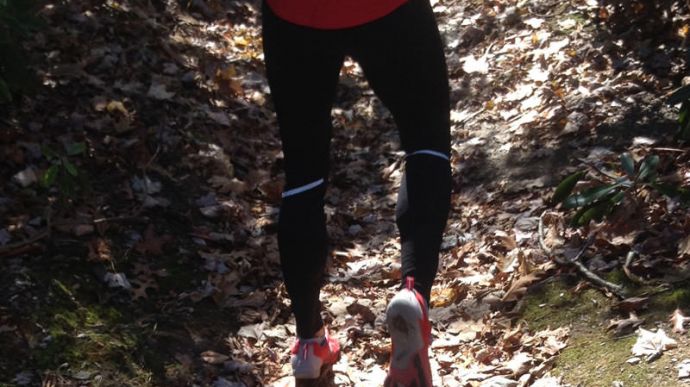 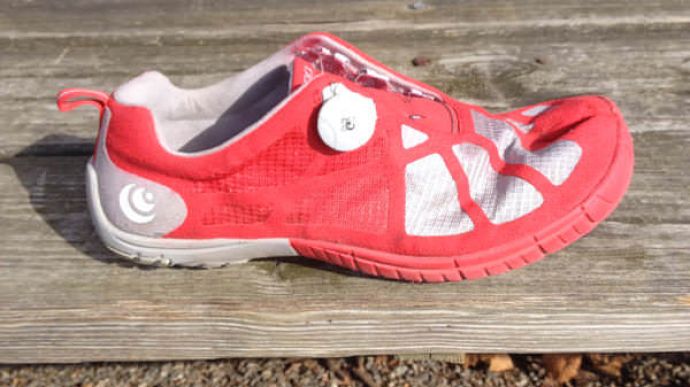 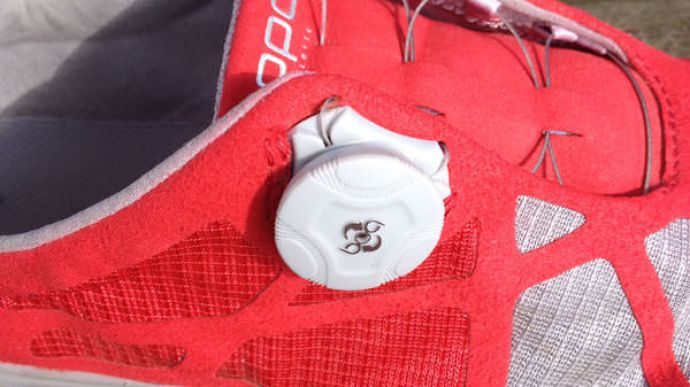 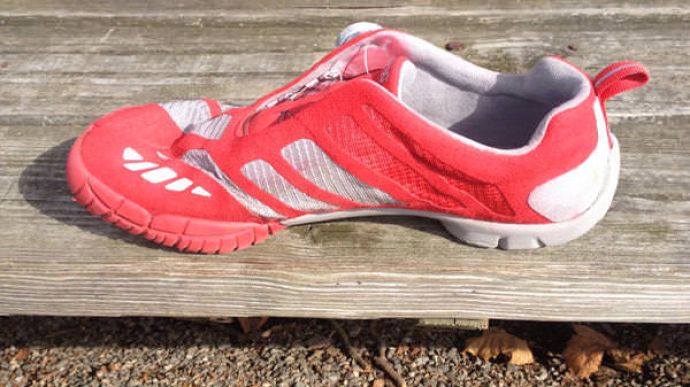 TheTopo Men’s RR hits the sweet spot between tradition and minimalism. As Goldilocks would say, it feels “just right” for faster training and racing. The split-toe design will not be for everyone due to aesthetics and/or function, but those who have tried other low-profile trainers will appreciate the functionality of the shoe and the fact that the company is branching-out from “how low can you go” minimalist ideals. The Topo MRR provides sound cushioning, a responsive ride, and a unique ground feel that will appeal to performance-minded runners looking to make the most of each run.
WHERE TO BUY
LOWEST PRICE
$43
SHOE INFO
Topo Athletic
Brand
Athletic MRR
Model
Minimalist
Type
6.5 oz. (184 gr.)
Weight
130 US$
MSRP
WHO IS IT FOR
Runners accustomed to low-profile footwear who train to race faster while improving biomechanical function.
Help me choose

Topo is a new company founded by Vibram’s ex-CEO, Tony Post. Post brings with him many years of experience in the shoe industry, was a highly competitive runner himself, and understands what real runners want out of their shoes- simplicity, functionality, and durability.

The Topo line is based on the Japanese Tabi sandal, and is meant to allow the big toe to move independently from the other four. In theory, this design improves foot proprioception, power off the ground, and balances the kinetic chain for more efficient running. The company appeals most to those interested in shoes made with lightweight materials, anatomical lasts, and close to zero-drop heel-to-toe differentials.

TheTopo MRR comes packaged neatly with special care taken to avoid disturbing the shoe’s upper during shipping. The first thing I wanted to play with on the shoe was its unique Boa Closure System. I slipped my foot into the shoe, and was immediately pleased with how easy it was to adjust my “lacing” using the Boa dial.

It is a simple “snap and turn” system to adjust the shoe’s tongue to your specific foot width; the instructions it came with were easy to follow, and nice to see for a first time Boa user like myself.

My first run in the Topos was a brisk eight miles before work one morning. My usual morning route takes me along a nice, paved country road and then up a windingdirt trail before I turn around at one of several possible points. I was immediately struck by how light and responsive the shoes are, and was impressed that the Topos didn’t damper my stride propulsion like other minimalist shoes tend to do.

I feel that many minimalist options are too soft and flexible for fast running. The human foot only flexes to a certain degree rather than folding over on itself, and the Topos seem to exhibit a similar range of motion when flexed. This is good, because if your toes ever reached your ankle while running, you would be in a world of hurt…

The Tabi design is noticeable while running, but to a small degree. You do get the sense that you are able to use your big toes more in the shoes, and this feels pleasant when running. However, the only hot spot I have felt in the shoes was along the outside of my left big toe, but it was a fleeting sensation with no lasting blister.

The shoes feel best on asphalt, given the fact that they are “road” shoes, but also performed well on loose gravel. I have stepped down pretty hard on rocks a few times in the MRRs, but only once have I winced from the impact.

Therefore, I recommend these for roads, bike paths, and tracks primarily, but if you want to venture off-road on non-technical terrain you should be just fine. The traction is excellent, and you shouldn’t incur any lasting pain from scurrying over a little gravel in the Topos.

The ride of the Topo MRR is most similar to the Brooks Pure Connect, and the outsole is vaguely reminiscent of the Newton MV2 Racer.

Comprised of a fairly standard blend of materials, the outsole of the Topo MRR is predominantly firm rubber and EVA foam. The mid-forefoot feels excellent while running for us forefoot strikers, and the firm heel discourages heel strike. This aggravated a lingering bit of plantar fascia discomfort on one particularly fast run I completed in the shoes, but otherwise I haven’t had any issues. The ride is fast and efficient.

You won’t waste energy in the Topos, and their design may help improve overall form given its forefoot-centric positioning. If the shoe is zero-drop as the company claims, it feels different than any level shoe I have worn in the past.

A bit wear is already noticeable on the outsole after some 50mls of use, but it is more to the rubber rather than the foam, and is isolated to the extreme forefoot where abrasion naturally occurs. It will be interesting to test the shoe’s long-term durability against other similar options.

TheTopo MRR sports a well-built upper that is designed to prevent rubbing and hug the foot securely. It is made from a blended faux-Suede material that repels water well and is easy to clean after running over muddy terrain. The forefoot is pleasantly wide to allow for full toe splay, but it was hard to tell if it was just my narrow foot or the shoe providing such roominess.

Despite its metallic “laces” attached to the Boa dial, the tongue is very comfortable over the top of the foot where many runners sometimes feel pressure. The Boa dial also would make this racing shoe a prime choice for triathletes looking to transition as quickly as possible to the run.

In line with the upper, all Topo shoes require the use of “toe” socks given the split design. The company sells their own version of Injinji socks featuring the Topo moniker with the big toes separate from the other four. These are very comfortable and rather inexpensive. However, given this fact, runners will have to forego their favorite lucky pair of compression socks on race day if Topos are worn.

Note: It is recommended by Topo that runners not complete hard/long runs in their shoes without socks. I took them for a half-hour jog sans socks with no issue, but it was at a very easy pace on a cool day. Use common sense to prevent blisters, just as with any other shoe.

The Topo MRR is a unique option for those wanting to explore a less trendy semi-minimalist shoe that caters to the runner’s needs before the fashion runway’s. Expect a firm, responsive ride in the MRR that will likely push the pace on training runs, and perhaps lead the way on race day. If you don’t mind the idiosyncrasies surrounding the Boa system and unusual socks, then check out a pair from Topo Athletic. You may find that tabi is far from taboo.

We thank the nice people at Topo for sending us a pair of Athletic MRR to test. This did not influence the outcome of the review, written after running more than 50 miles in them.

Visit ShopRunningWarehouse.Com
This page contains affiliate links. As an Amazon Associate I earn from qualifying purchases.
WHERE TO BUY
LOWEST PRICE
$43