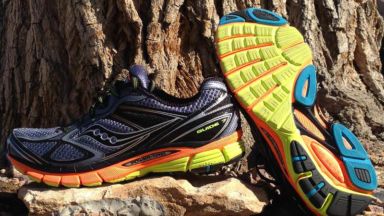 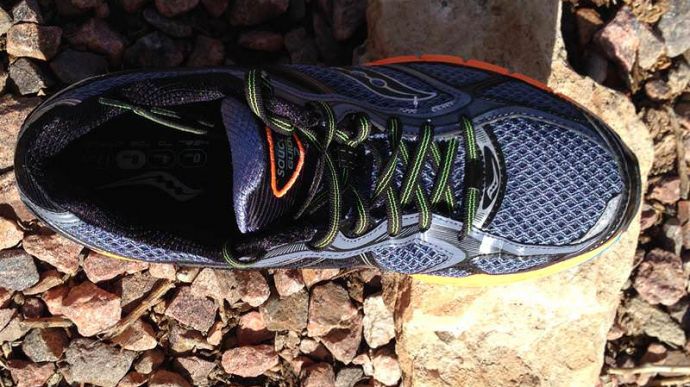 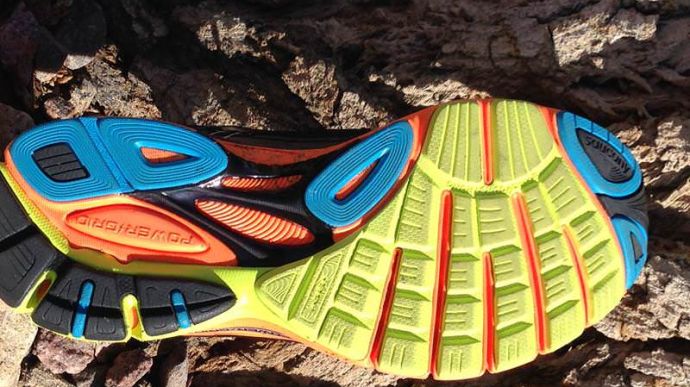 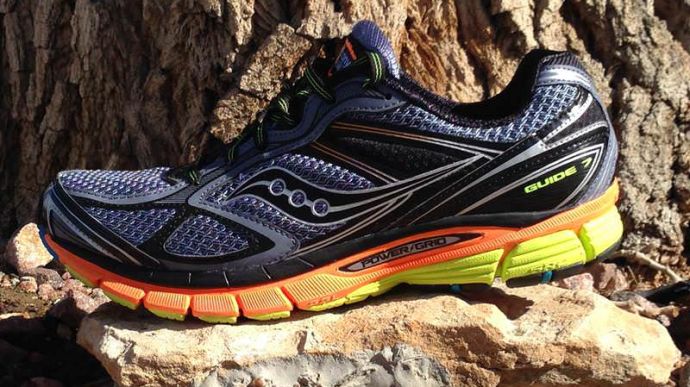 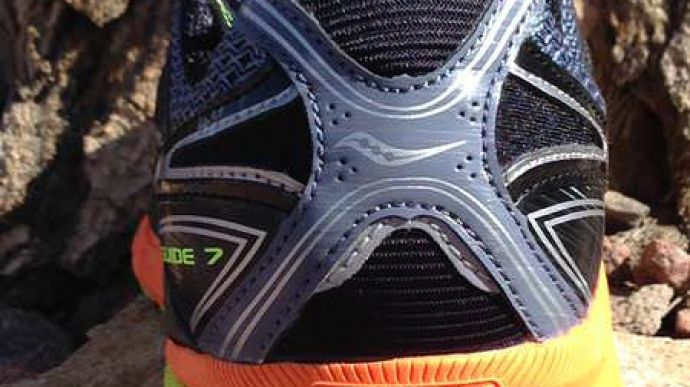 Saucony has taken a lot of time and care to develop the Guide 7, and it very apparent. The Saucony Guide 7 offers great forefoot comfort, super durability, and lasting comfort in a great daily supportive running shoe.
WHERE TO BUY
LOWEST PRICE
$120
SHOE INFO
Saucony
Brand
Guide 7
Model
Stability
Type
10.0 oz. (283 gr.)
Weight
120 US$
MSRP
Saucony Guide
Family
Guide 6
Previous model
WHO IS IT FOR
Any runner that is wanting a dependable, durable, daily high-mileage shoe that offers a moderate amount of stability and a comfortable ride.
Help me choose

The Guide 7 is the updated version of Saucony’s most widely awarded and popular stability shoe. The Guide 7 has been pain stakingly researched, tested, and engineered to harmoniously blend stability, cushioning, and flexibility into a daily stability trainer. Several improvements and changes have been made from the Guide 6 to make the Guide a better shoe and “your ultimate training partner.”

I have definitely have had a storied past with the Guide and have come through a few evolutions of the shoe. I was excited to have the opportunity to again review the Guide especially Since Saucony has put so much R&D into this version than any other in history.

Upon initially receiving the shoe I was pleased to see that a lot of focus had been given to the forefoot region of the shoe, which I found narrow and uncomfortable in the 6. Once I placed the shoe on my foot the satisfaction continued as not only did I find a roomier toebox, but it also seemed slightly more cushioned and fluid than I had remembered.

This version seemed to feel slightly stiff out of the box and it was evident that they would require a break in period. The construction is still very sound and looks to have improved in the outsole of the shoe.

The Sole Unit of the Guide 7 is where the most significant changes take place in the shoe. The first worth noting is a change in material. Saucony has switched from its ProGrid cushioning system to Power Grid for the 7 which is a 15% lighter and 30% more durable material.

While this switch is not outwardly apparent and did not lend itself to on overall reduction in shoe weight it did create a more responsive and resilient shoe particularly through the midfoot and forefoot. I will note that the cushioning of this newer system is slightly less soft than the 6, but the added resiliency and responsiveness more than make up for it.

The flared forefoot design is quite possibly one of the best adjustments that the Guide 7 has going for it. As I mentioned briefly and in my review of the Guide 6 I felt that the toebox was narrow and cramped leaving my toes feeling smashed and compressed.

The Guide 7 has eliminated this with this design which creates a wide comfortable platform to build from. The flared forefoot not only generates room for the toes, but generates smooth and stable propulsion throughout the latter stages of the gait cycle.

The Guide 7 still uses a decoupled beveled heel that was introduced in the six to help slow and combat any inward rolling. The Guide 7 is still a slightly posted shoe, however some redesign elements in the form of strategically placed crash pads in the mid foot have helped to reduce the shank size.

None of these features are heavy handed which make it appealing to a neutral runner like myself that needs some support on longer runs when your gait starts to fall apart or become sloppy.

The outsole is very reminiscent of the Guide 5. The directional triangle lugs that exposed more foam that were found on the Guide 6 are gone. Underneath the Guide 7 is now a more fan design with bigger patches of rubber creating more surface area and improving the traction of the shoe.

One thing that I think it also does is increase the overall durability to keep up with the miles that could be potentially be put on the shoe.

So in case I hadn’t mentioned it yet, ha ha ha!, the 6 six had a very tapered and uncomfortable toebox. What a relief to have found the problem resolved. The Guide 7’s newly-created platform have a roomier wider toebox that is definitely more accommodating. Adjustments to the overlays have helped to open up the shoes fit as well.

A change in the upper material to a more open mesh Hydramax material was also made. The material wicked quite well and had an attractive smooth plush feel. The Upper had an overall nice feel with no noticeable pressure in any peak points.

The Guide as many of you know is one of Saucony’s go-to shoes and comes with an energetic following and a strong list of accolades. So it really shouldn’t come as a surprise when Saucony announced that they were going to do a little more R&D to help refine it.

What many didn’t realize was to the length they would go, and that Guide 7 represents the longest development initiative in the company’s history.

The Guide 7 is definitely representative of all the effort that went into developing it. The shoe is definitely as good as it ever was and more. Simply put the Guide 7 is a wonderful shoe for runners looking for that just right combination of support, comfort, and durability in a daily long distance support running shoe.

We thank the nice people at Saucony for sending us a pair of Guide 7 to test. This did not influence the outcome of the review, written after running more than 50 miles in them.