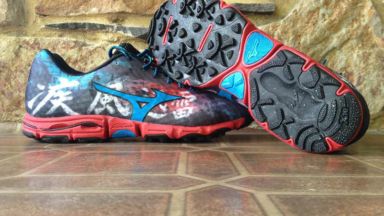 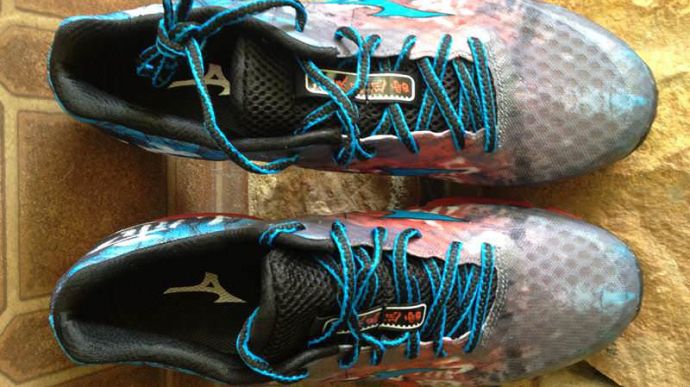 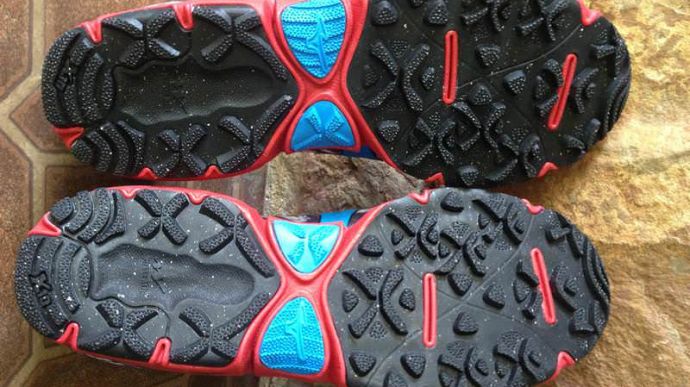 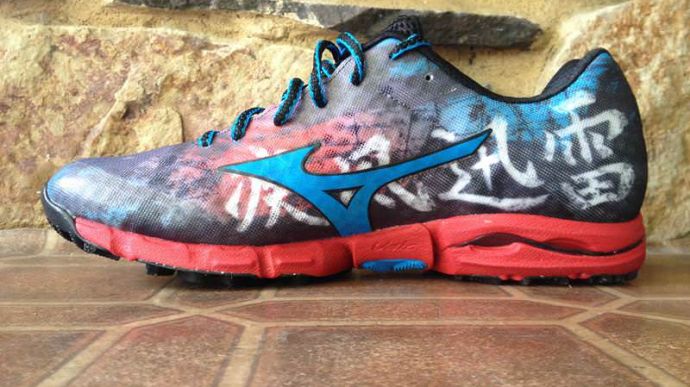 The Wave Hayate provides a firm, responsive ride. Its lightweight frame makes it a good option for runners looking for a fast racing shoe for the trails.
WHERE TO BUY
LOWEST PRICE
$109.99
SHOE INFO
Mizuno
Brand
Wave Hayate
Model
Trail
Type
8.8 oz. (249 gr.)
Weight
109.99 US$
MSRP
WHO IS IT FOR
This shoe is for runners looking for a lightweight trail shoe that is ideal for trail runs and races up to half marathon distance.
Help me choose

The Mizuno Wave Hayate is one of two new trail shoes Mizuno is introducing in 2014. The Hayate is designated as the lighter more nimble of the two, and is meant for runners who are looking to aggressively attack the trails according to Mizuno.

The shoe features similar technology to its big brother the Kazan which includes the signature Mizuno Wave as well as the mid-foot X-groove.

The first thing I noticed about this shoe when I put it on is that it’s lightweight and feels very minimal, like its barely there. It feels similar to a racing flat. This shoe feels like something you wear when you want to go fast on the trails.

There are no bells and whistles or extra weight. It is a streamlined version of the more beefy Kazan and the way Mizuno describes the shoe as low-slung could not be a more perfect way to describe the Hayate.

The midsole of the shoe contains U4ic foam. U4ic was introduced by Mizuno in 2013 and is designed to be lighter and provide more shock attenuation than previous foams used in Mizuno shoes.

In addition to U4ic the Hayate contains the Mizuno Wave that is designed to act and support your foot in the same manner as a cars suspension. The foam is thin, and makes you feel low to the ground while wearing the shoe.

It provides a firm ride while running and because of its thin nature, it really allows you to feel the surface beneath your feet and is quite responsive.

The outsole has aggressive lugging that provides good traction on all surfaces. Even when wet this shoe holds traction pretty well. The lugging is similar to whats found in the Kazan but is more spaced out.

So instead of the lugs looking similar to the bottom of a golf shoe, the Hayate provides the same aggressiveness with larger channels in between the lugs. This allows mud and debris to clear easily from the shoe and helps to maintain traction in wet conditions.

The outsole also includes the X-groove in the mid-foot. The X-groove is designed to allow your forefoot to be able to adapt to any terrain your running on.

I find that the X-groove creates some instability when running on uneven surfaces by allowing too much free range motion in the forefoot. This shoe did however feel more stable than the previously reviewed Kazan.

The upper of the shoe is constructed with high quality mesh materials. It is highly breathable, with many vents covered by a very thin lightweight mesh material. The Hayate also has a clear wax like coating around the bottom where the upper meets the midsole which adds durability/ some water proofing.

It is comfortable enough, but nothing makes it stand out with regards to comfort. You will not be overly satisfied with the comfort of the upper if you have worn an upper with seamless construction. That being said, I did not find that the shoe created rubbing or hot spots anywhere on my foot.

The materials used on the inside of the upper are plush, in the heel and tongue area. One issue I had with this material is that it is very slippery.

It feels nice on your foot and reduces friction but does so at the expense of your foot sliding around a little too much in the shoe while running. The slippery material used inside and the low slung frame at times made the shoe feel like it was not securely attached to my foot even though it was.

It took some time to break these shoes in and they did grow on me as I ran in them more. I eventually got used to the feeling of my foot sliding around on the slippery material inside the upper and was able to trust that the shoe was secure and my foot was not going to roll.

I am still not a fan of the X-groove but it works much better in this shoe compared to the Kazan. The instability is still there on uneven surfaces and it takes some getting used to and compensation in your foot strike to avoid rolling inward.

The Hayate was fine up to about half marathon distance for me, but I would not want to run in them further than that. I think that they are a good shoe for shorter trail runs and races.

Although I did not race in them, these strike me as a sort of trail version of a racing flat. Beyond half marathon distance I would prefer a less firm ride and a bit more protection.

Protection and cushioning are a sacrifice you usually have to make when looking for a lightweight trail shoe and I do think some people could be happy in this shoe for longer distances, just not me personally.

We thank the nice people at Mizuno for sending us a pair of Wave Hayate to test. This did not influence the outcome of the review, written after running more than 50 miles in them.