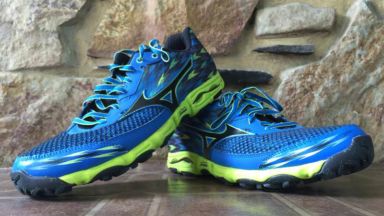 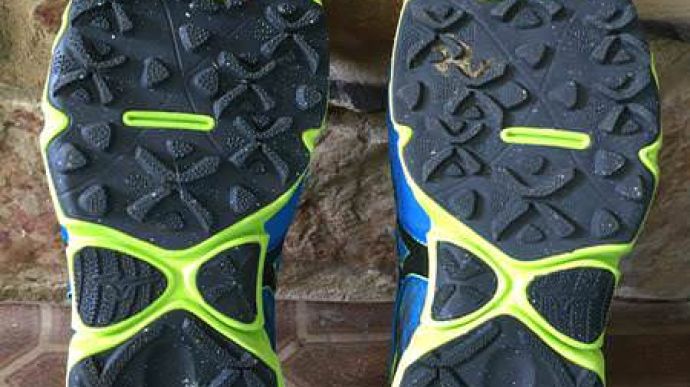 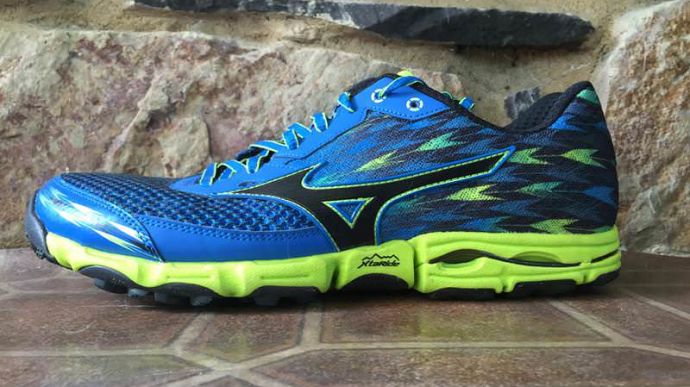 The Wave Hayate 2 provides a firm, responsive ride. Its lightweight frame makes it a good option for runners looking for a fast racing shoe for the trails.
WHERE TO BUY
LOWEST PRICE
$109.99
SHOE INFO
Mizuno
Brand
Hayate 2
Model
Trail
Type
8.80 oz. (249 gr.)
Weight
109.99 US$
MSRP
12 mm
Heel Drop
Jul / 2015
Release Date
Wave Hayate
Previous model
WHO IS IT FOR
This shoe is for runners looking for a lightweight trail shoe that is ideal for trail runs and races up to half marathon distance.
Help me choose

The Wave Hayate 2 is the second version of the Wave Hayate that made its debut last year. It is a lightweight performance trail shoe designed for agility and speed on off road surfaces.

I can definitely see a few small differences between the Hayate and Hayate 2. The first thing I noticed is that they’ve added a little bit of protection to the upper.

There is a vinyl strip going around the toe of the shoe to add protection from rocks on the trail.

The outsole of the shoe features what Mizuno labels as “x10” technology. Mizunos website specifically states that “x10” technology is meant to provide durability and traction by way of extremely durable carbon rubber in higher impact areas.

Basically this makes for an outsole with a lot of rubber and aggressive lugging. The lug pattern is very similar to that of the Hayate.

It has large lugs with enough space in between to allow channels to clear and the shoe to hold traction.

Traction is definitely one of this shoes strong points just as it was in the original Hayate. Even when wet the shoe does a great job of holding traction.

From what I can tell the midsole hasn’t changed much from the previous version. This includes a thin layer of foam and the signature Mizuno wave.

The Mizuno wave provides shock absorption and support for your foot, while the thin foam makes for a firm but responsive ride.

It can become a little too firm after a while for my liking but is very responsive. In addition to these features this shoe incorporates an X-groove into the midsole and outsole.

The best way I can describe this is that its designed to be a multi directional flex point in the middle of the shoe. The idea is that this flex point allows the shoe to adapt to varying terrain.

What I mean is that there are times when running in the shoe that I feel the shoe flex in such a way that I am pleased and can notice the shoe adapting to the terrain, but there are also times when the shoe can flex when I don’t want it to which can create a feeling of instability.

Overall the shoe performs well there are just times when you go from a firm and responsive ride to a slightly unstable ride depending on the terrain.

The upper of the Hayate 2 is comfortable. It’s made of high quality mesh materials and breathes very well. There were a few changes made to the Hayate 2 that really standout and make it a better upper than its predecessor.

The first is that they’ve beefed up the toe of the shoe a little bit to provide at least a little bit of protection for your toes from rocks and roots.

One of my complaints about the original Hayate was that there was little to no protection. The Hayate 2, while still not a tank, provides at least some sort of buffer between your toes and rocks which is a great addition.

The heel and tongue areas of the upper are made of plush materials.

Last year when running in the Hayate I had trouble with my foot sliding around and sliding forward due to the sheen like materials used on the inside of the upper.

This year they’ve used a similar material but it has a textured finish resulting in no slipping or sliding around.

Overall I think this upper is comfortable enough. It is not seamless but it also didn’t cause any rubbing or blistering on my foot.

There were some great improvements made to the Hayate 2 compared to the Hayate this year but overall there’s nothing about the shoe that really blows me away.

The ride of the shoe really has not changed aside from the improved material in the upper that prevents your foot from sliding.

They still strike me as the trail version of a racing flat and I think they could be put to good use for shorter trail races. I liked wearing these shoes when doing speedier, shorter runs on the trail.

They are light and agile but they don’t have the type of comfort, cushioning, and stability to last for an all day trail event or Ultra.

We thank the nice people at Mizuno for sending us a pair of Wave Hayate 2 to test. This did not influence the outcome of the review, written after running more than 50 miles in them.