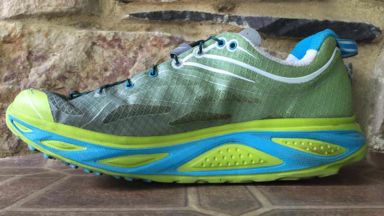 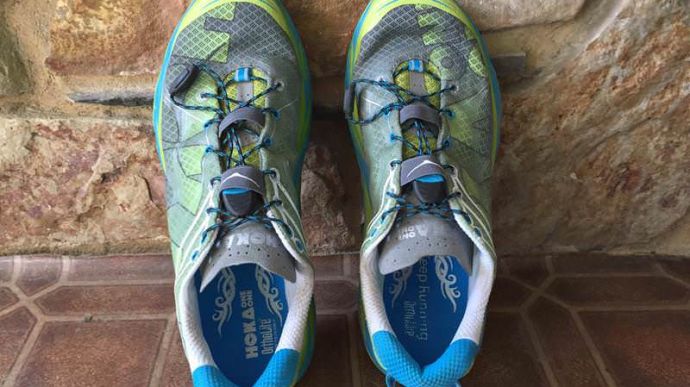 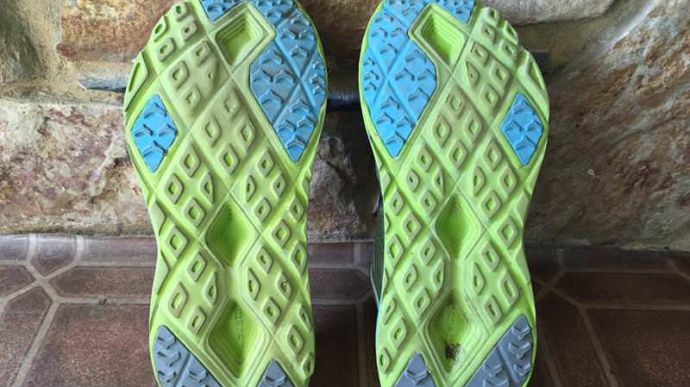 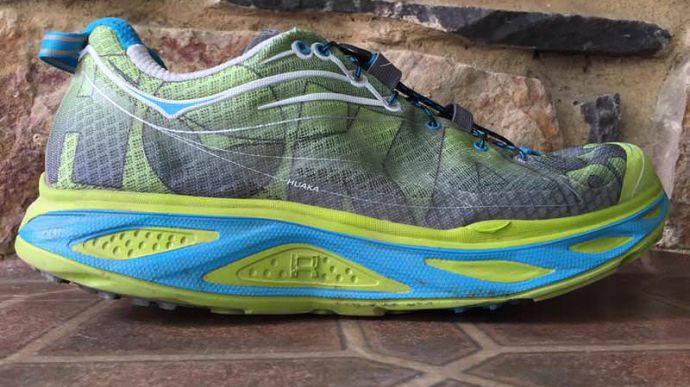 The Hoka One One Huaka is a lightweight cushioned cushioned trail/road shoe that provides the runner with an ample amount of cushion without sacrificing stability or responsiveness. The shoe does well on the road but where it really shines and stands out is on the trail.
WHERE TO BUY
LOWEST PRICE
$150
SHOE INFO
Hoka One One
Brand
Huaka
Model
Trail
Type
8.9 oz. (252 gr.)
Weight
150 US$
MSRP
WHO IS IT FOR
I would suggest the Huaka to anyone looking for a lightweight cushioned trail shoe that does not sacrifice responsiveness for cushioning.
Help me choose

Hoka One One Huaka General Info:

The Huaka is a shoe that is designed to give runners a lightweight shoe for both road and trail while still offering that signature Hoka cushioning. It comes in at an impressive 8.9 oz and offers many features including Hoka’s new RMAT midsole material.

The first thing I notice about the shoe is how lightweight it is.Similar to the Clifton, Knowing how much the shoe weighs cannot replace the experience of actually having it in your hands.

At first glance it looks like it would be heavy, but when I pick it up I am again surprised at how light it is and left thinking .“how?”

In addition to being lightweight, the shoe includes early stage , meta-rocker technology which causes midsole/outsole of the shoe to bend upward at the heel and the toe. This is designed to propel you forward no matter how your foot strikes the ground.

The rockered feel of the shoe will be very noticeable to a runner who has not run in Hoka One One shoes before, although there are a few other companies incorporating a similar technology into their shoes. The Huaka’s have a 2mm offset/drop and a stack height of 27mm at the heel and 25 mm at the forefoot.

Hoka One One Huaka Sole Unit:

Hoka One One Huaka – Sole

As previously mentioned, this shoe includes a new midsole material known as RMAT which is intended to provide increased rebound, durability, and grip. What’s interesting about the RMAT material is that in addition to providing cushion as a midsole material, it is designed to be used as part of an outsole as well.

So the sole of the shoe consists of mostly exposed RMAT with some strategically placed rubber zones that have lugs on them for running on the trail.

When running in the Huaka you can really feel the difference in the new midsole material compared to normal EVA foam. It really does feel a bit more springy. The shoe gives you plenty of cushion but is firm enough that you don’t lose responsiveness.

There is no feeling of “running on pillows” with the Huaka. The springy midsole material along with the rockered profile makes you feel like your being propelled forward while running in this shoe.

The rubber lugged areas on the outsole provide great grip in most conditions. In complete washout conditions I noticed some slippage when my foot was transitioning from the RMAT material to the rubber luged zones.

Basically the exposed midsole can cause some slipping when you are on very muddy trails but for the most part I thought the shoe gripped well even in moderately wet conditions. It was only in very wet and muddy conditions that I noticed a problem.

The shoe is advertised to be used on the road or trail. On the road in all conditions it has plenty of grip but the rubber lugs can wear out pretty quickly if running on the road.

The RMAT material seems to hold up pretty well on both road and trail but anytime you have rubber lugs on the outsole of a shoe and are running on the road it’s basically just grinding them off.

Hoka One One Huaka Upper:

The upper is made of a very thin and pliable material with come clear laminated overlays which I am assuming are for durability purposes. There are no seams and the shoe feels very comfortable to run in.

It provides the foot with plenty of room with a fairly wide toe box and isn’t constricting at all. The tongue of the shoe is made of a very thin neoprene type of material that is unobtrusive and doesn’t cause any pressure problems on the top of the foot.

Hoka One One Huaka – Top

The upper does its job well of holding the shoe to your foot securely without getting in the way. I have always been a fan of uppers that seem to sort of disappear when your running and in my opinion this upper does a good job of that.

It breathes well, it drains well after getting wet and as far as durability goes it is holding up very well with no signs of wear and tear after 100 or so trail miles in addition to quite a few road miles.

The shoe included two different insoles that can basically be worn three different ways. The first option is a normal insole that is designed to go with the shape of your foot that you would find in basically any running shoe.

The second option is a more flat insole that does not curl up on the sides or in the heel and is for the purpose of giving your foot more room while in the shoe.

The third option is to use both. Insert the flat insole and then insert the fitted one on top of it. This is for those who are maybe seeking a bit more cushion.

I tried all three options and eventually decided that my preference was the flatter insole designed to give your foot more room in the shoe. It is not that I felt constricted otherwise, I just felt that it was the most comfortable out of the three options.

In addition to the included insoles the Huakas came with two options for lacing. The first is the Hoka race lace system, and the second is regular shoe laces which were actually included.

Despite many things I have read and heard about the race lace system, I thought it was fantastic. For those not familiar with it it is basically a thinner shoe lace that is laced in the upper that is connected at the top with a plastic drawstring type locking mechanism.

You basically tighten the shoe to where it feels comfortable and instead of tying the shoe you unlock the plastic attachment, slide it down and lock it in place. It then keeps your laces right where you originally started them.

There are also two elastic bands that go across the top of the upper that you can tuck the laces and locking mechanism into to securely hold it in place while you run.

This was my first experience with this system and I thought it worked really well. It has not come loose one time for me while running and always stayed securely held under the elastic bands.

Hoka One One Huaka Conclusions:

I find it odd when a shoe is marketed as a road/trail shoe. In order for a trail shoe to have adequate grip, lugs must be present. In any case, running with a lugged outsole on the road is basically like taking a grinder to the rubber lugs, and will cause them to wear out quickly no matter what they are made out of.

I took these shoes on a 24 mile road run. They performed flawlessly in basically all areas. They were comfortable the whole time, provided a smooth ride and the cushioning felt great.

However as I suspected, when I took them off and examined the lugs afterwards they were pretty worn down. This was pretty shortly after I received the shoes for testing and while there was plenty of lugging left, repeated use like this would surely wear those lugs down quickly.

Hoka One One Huaka – Medial Side

If the lugs were to wear down, the shoe would still perform great on the road but it would be a lot less useful on the trails, especially when muddy.

Overall this is a fantastic trail shoe. It is often a push and pull when it comes to trail shoes or me. I really like the ground feel of a minimalist low slung trail shoe that is incredibly responsive, but I also don’t like beating my feet up and feeling every little tiny sharp rock that I run on top of.

This shoe really provides great responsiveness coupled with the perfect amount and firmness of cushioning. The cushioning is thick and absorbs all of those little sharp, painful rocks that you step on while running on the trail, but is firm enough to allow you to make quick movements and adjustments when navigating larger rocks and roots.

They basically kept my feet happy. Which is all you could really want in a shoe. There is normally a point on every long trail run that my feet start to feel beat up from the rocks and roots, and these shoes did a really great job of minimizing and in some cases completely taking that feeling away.

While sometimes I find a shoe is too firm, or too soft, or to unstable, I found that these shoes are pretty much dead on when it comes to trail running. They are lightweight and responsive yet they provide plenty of cushion. They grip well, drain well and the upper is comfortable for long periods of time.

I was a big fan of Hoka One One’s ultra-lightweight Clifton road shoe. The Huaka feels like a slightly beefed up version of the clifton that adds a little bit of weight with more protection, more lugs, and a firmer more responsive midsole.

While I wouldn’t run in this shoe solely as a road shoe, as far as trail shoes go I really feel that this is the best I have run in yet. They are so good in fact that I’ve decided to go with them over my trusty Pearl Izumi Trail N2’s (2013 trail running shoe of the year) for my upcoming 50K trail race.

We thank the nice people at Hoka One One for sending us a pair of Huaka to test. This did not influence the outcome of the review, written after running more than 50 miles in them.

Hoka One One Huaka Price Comparison

Similar shoes to Hoka One One Huaka

Hoka One One Huaka Review