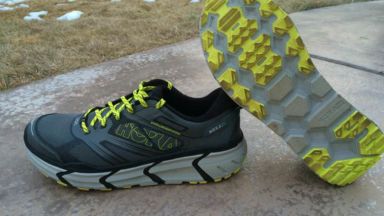 While this update is a slight improvement on the first version, Hoka still has some fit and durability issues to remedy to justify the $130 price tag.
WHERE TO BUY
LOWEST PRICE
$144
SHOE INFO
Hoka One One
Brand
Challenger ATR 2
Model
Trail
Type
9.50 oz. (269 gr.)
Weight
130 US$
MSRP
5 mm
Heel Drop
Mar / 2016
Release Date
Challenger ATR 2
Previous model
WHO IS IT FOR
The Challenger ATR 2 is recommended for daily trail running as well as those looking for a racing shoe for any ultra distance. This shoe is not recommended for runners who require a great deal of extra support for pronation due to its high stack height and supple cushioning.
Help me choose

Visit ShopAmazon.com
Sorry - Product not found. Please try RunningWarehouse.Com to check in their assortment.
This page contains affiliate links. As an Amazon Associate I earn from qualifying purchases.
WHERE TO BUY
LOWEST PRICE
$144
AVAILABLE ON SALE:Previous model $144