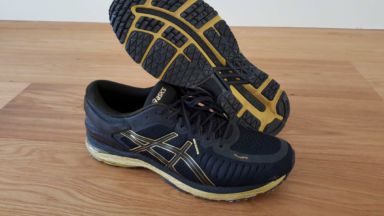 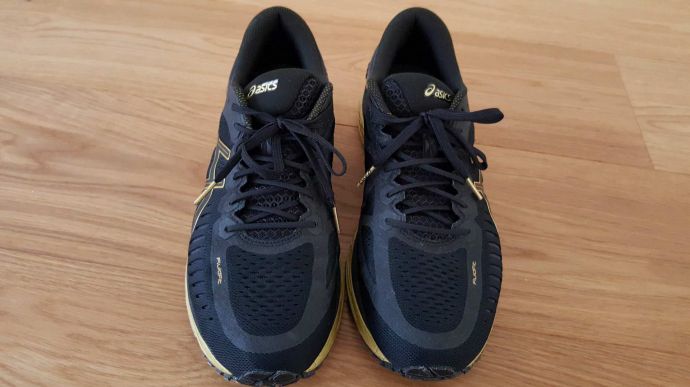 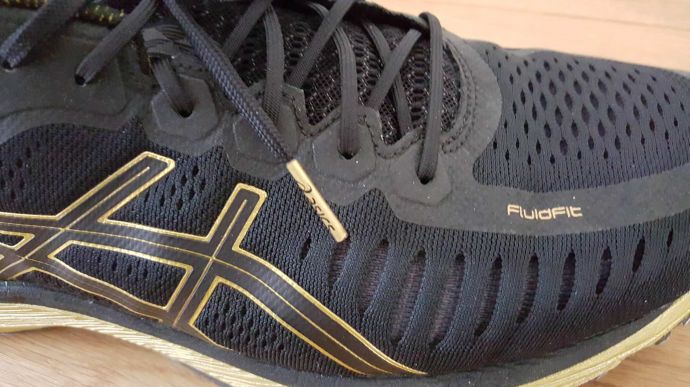 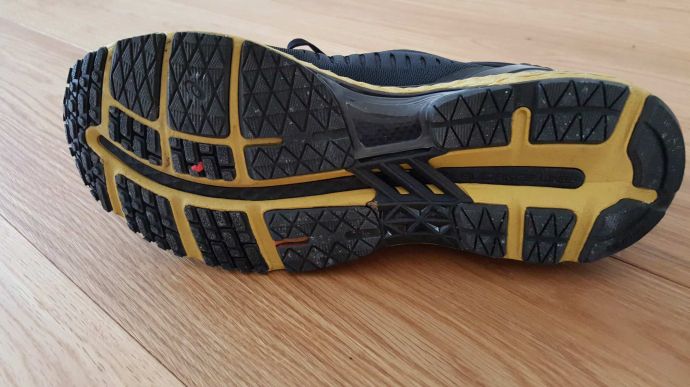 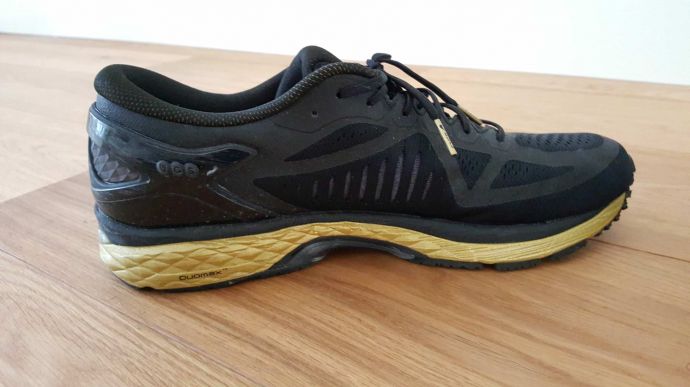 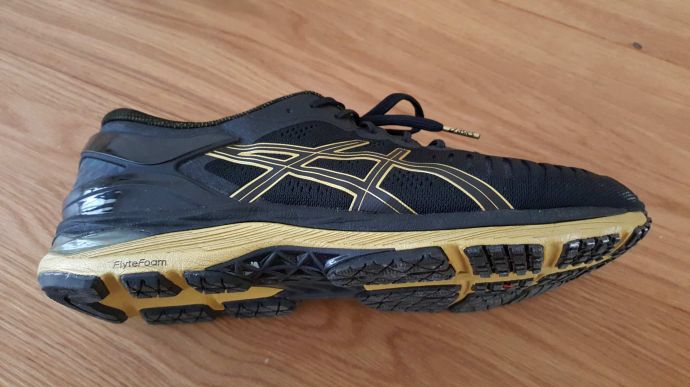 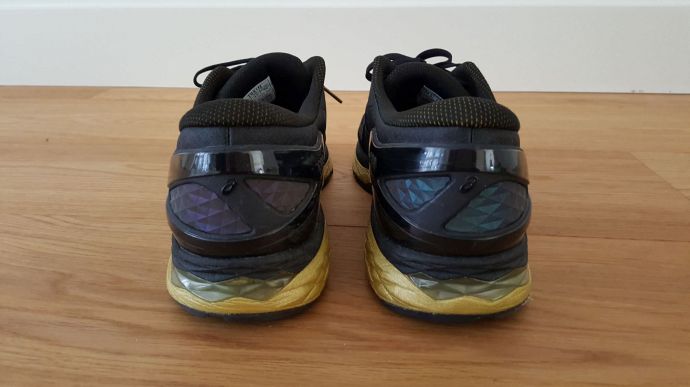 It's tough to evaluate the Asics Metarun. As a moderate stability running shoe - it's really good. But is it worth $250? Hard to say. If money is no object to you and want to try the latest and greatest give it a shot. I really enjoy the fit of the upper, the cushioning underneath and the overall ride.
WHERE TO BUY
LOWEST PRICE
$119
SHOE INFO
Asics
Brand
MetaRun
Model
Stability
Type
11 oz. (312 gr.)
Weight
250 US$
MSRP
30 mm
Heel
10 mm
Heel Drop
Nov / 2015
Release Date
WHO IS IT FOR
Runners looking for the latest and greatest technologies and in general for people who are looking for a good, moderate stability shoe that delivers premium fit and feel at a reasonable weight.
Help me choose

Took me a while, but finally here’s my review of the Asics Metarun.

Let’s tackle the 800 pound gorilla in the room: the shoe is expensive. $250 is the price tag and it’s the first thing everybody talks about and probably a big part of all the PR this shoe has received is about the price.

Yes, it’s expensive. We’ll go back to it later – but for the moment I want to review the shoe based on its merits (or issues) and not on the price alone. Let’s start with my first impressions.

This shoe is available in one color only for men and one for women: black with gold for guys, black with rose gold for ladies. Although gold accents is not the color I would typically go for, it adds to the exclusivity of the shoe. I’ve had more than one people commenting about the shoe asking “is that some limited edition or something?”

And indeed limited edition it is. Unfortunately by the time you read this review – it will be very hard to find a pair.

It took me a while to believe this is a stability shoe. It’s not extremely light per se, but quite light compared to most stability shoes in the market. The midsole foam is all painted in gold, hiding the dual density midsole.

The Metarun took 2 years to develop – while most shoes are designed/sampled/produced within a 6-12 months time – and the brief to the designers was apparently “spare no expenses”. The result is a shoe that was meant to look for perfection rather than commerciability.

So – what was achieved? Let’s have a look.

The lightness of the foam is actually quite noticeable. Although the shoe isn’t the lightest, it is very light for a shoe with 30mm heel and 20mm toe stack heights. You actually notice this while airborne, the weight is well distributed and feels very natural.

The Metarun is a stability shoe that doesn’t look like one. Stability is achieved through a new version of the DuoMax called Rolling DuoMax: it is an insert in the medial heel/arch area of harder foam.

A new midfoot shank that replaces Asics’ traditional Trusstic system. This new shank is a two piece, carbon-fiber reinforced insert that is very flexible but hardens if the inward roll of the foot becomes too much.

Cushioning comes primarily from the FlyteFoam itself but a new version of the Gel cushions inserts (called X-Gel) is strategically placed in the heel and under the big toe. I actually feel the Gel while running in this shoe especially at heel contact with the ground. It is a very similar feel to the gel found in other Asics shoes. I prefer the way this is implemented though – because I do actually feel it’s less and I perceive the gait as more stable.

To summarize the sole unit: I really like it. It is not the most stable shoe I ever run in, but it provides (to me) a similar level of support as the Asics DS-Trainer while providing much more cushioning. The cushioning is soft but not spongy (as it might be the case with other Asics cushioning shoes) and the heel-to-toe transition feels very natural.

You need to actually run in the shoe to feel the innovations in the midsole. But the upper is another story entirely. Even by just looking at the shoe you can tell it’s a premium, luxury running shoe.

If I had three adjectives to describe the upper they would be soft, plush, smooth.

The heel is a paradise of memory foam enclosed in an extremely smooth lining material. Memory foam is soft and adapts to your heel. It is an absolute pleasure on your foot and it wraps the whole heel and collar of the upper. The only downside is that if you are wearing particularly thin or smooth socks it feels like it slides on them – but barefoot or with a proper running sock it is unbelievably comfortable.

On the outside, the heel is wrapped by an external clutch counter that connects to the midsole to lock in the heel firmly.

The rest of the upper is made of a new one-layer engineered mesh called FluidFit that alternates a closed and open pattern to proved to be flexible and breathable. There are no overlays on the upper – making it virtually seamless aside from the stitches that attach to the tongue.

The tongue itself is quite flat and traditional but adds another piece of memory foam right at the end to complete the nice feeling across the whole collar of the shoe.

I love how the Metarun feels. Heel is secured, midfoot is snug without feeling constrictive and the toebox allows the toes to spread without making them feel lost. The arch is quite flat – which I appreciate being cursed with ridicolously flat feet.

So the question is: should you buy the Asics Metarun (if you still found it in store) ?

I would – but I obviously have a love affair with running shoes and love innovation and new materials in shoes.

Let’s set the price aside for a moment. The Metarun is a shoe that performs much better than I thought it would. I approached it skeptically: “it’s a PR stunt!”, “the people at Asics have gone crazy!”, “this is not a shoe for serious runners”. This is all feedback I did read in my online circles or heard from friends in the industry. But I liked it.

If price was no objection, I would recommend it to all runners with flat feed and moderate stability needs.

But yes, the price tag is high and it does matter to a lot of people. You can buy a pair of DS-Trainer and a pair of GT-2000 for the price of a pair of Metarun and have money left for a couple of socks.

This is not to be underestimated. But at the same time I don’t want to underestimate how good this shoe is. I give it a 9/10 for its intrinsic execution, and I leave to the reader to ponder if it’s worth the money.

I am sure we’ll see these materials and technologies eventually trickle down the rest of the Asics lineup in the coming seasons and I am glad I had a chance to try them first.

We thank the people at Asics for sending us a pair of Metarun for testing. This did not influence the outcome of the review, written after logging more than 50 miles in them.