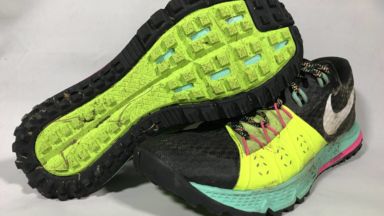 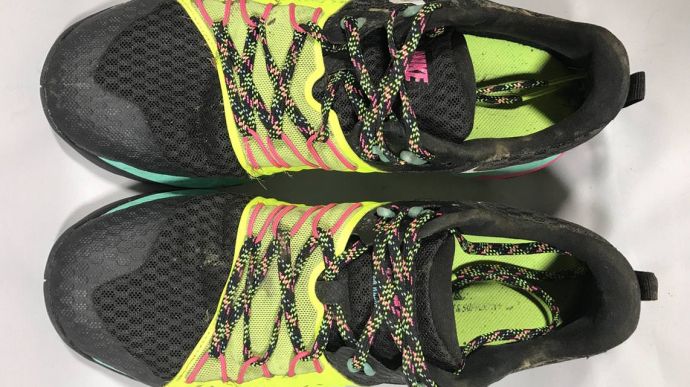 The Wildhorse sports a redesigned upper in its fourth version. The the new midfoot fit system will work great for some and will likely be too narrow/tight for others.

If you find that the shoe fits you well you will be pleased with the amount of support and protection it provides while maintaining responsiveness. This is a solid trail option worth checking out.
WHERE TO BUY
LOWEST PRICE
$110
SHOE INFO
Nike
Brand
Wildhorse 4
Model
Type
10.70 oz. (303 gr.)
Weight
110 US$
MSRP
8 mm
Heel Drop
WHO IS IT FOR
This is a great option for runners looking for a shoe that can provide protection, grip and durability while running on trails.
Help me choose

This is the fourth version of the Wildhorse trail shoe from Nike. It weighs in at 10.7 oz and has an 8mm heel to toe offset with a stack height of 28mm in the heel and 20mm in the forefoot.

For this years version the midsole and outsole have remained the same while the upper has undergone Some changes.

These include things such as dynamic flywire and a new midfoot fit system. This shoe is designed to provide protection and and traction on varied terrain.

When I first received the Wildhorse 4 I was surprised to see that there is a band like structure that stretches across the top of the upper. This is the first running shoe that I personally have seen with this type of design.

I had no idea what it was and after further research I realized that this was part of the midfoot fit system. It looks a little strange at first and takes some getting used to.

I put the shoe on for the first time and my initial reaction was to take it off. The upper felt too tight, it was hard to get on, and once I got it on I was worried that this shoe just would not be for me.

I could not see myself running in the shoe for 50+ miles in order to give it a proper review. I adjusted the flywire a bit and got it comfortable to the point where I thought I could go out for a shorter run and began testing.

I was able to test this shoe in all conditions but snow and it performed great in those conditions. I was most impressed by its performance half way through a trail race when torrential downpours flooded out most of the trail.

I was able to use the shoe with confidence while running through mud puddles so deep that I couldn’t even see my feet. The “environmentally preferred rubber” is designed to adapt to the environment.

This is a big word for “sticky rubber.” This helps traction in wet conditions and over rocky terrain. While not a game changer It works well in this outsole and helps improve the grip.

The stone shied (rock plate) positioned between the outsole and midsole in the forefoot is designed for protection. It does a great job of providing the foot with protection from rocks and sharply angled roots. There is a trade-off here because the shoe is not particularly flexible.

The crash pad is located on the lateral side of the shoe near the heel and is designed to provide some extra shock absorption upon foot strike.

The cushioning of this shoe hits a sweet spot that I really enjoyed. It is fairly firm but it never feels like there is not enough cushioning there.

The rock plate does a great job at protecting the foot and the phylon cushioning maintains a slightly softer feel from the heel through part of the midfoot.

So far the cushioning and outsole have demonstrated great durability. This shoe is also quite responsive despite what one would think. This has a lot to do with the fit of the upper.

The upper is where the changes were made for this update. Changes include an all new midfoot fit system, dynamic flywire, spacer mesh, as well as a strobel last.

The biggest change those familiar with the Wildhorse model will notice is the midfoot fit system. There is a piece of thin mesh fabric that goes across the top of the upper in the midfoot area.

There is a durable and rugged looking vinyl type material on the sides and more of a stretchy mesh material in the middle.

The material is stretchable to a point but it is clear because of how tight it is that its purpose is to make sure your foot cannot move laterally inside the shoe.

It does just that. When you run in this shoe you experience no sliding laterally whatsoever. Even on very uneven terrain this shoe stays in place on your foot and allows for zero movement inside the shoe. This is good and bad.

I really like the way the midfoot fit system for multiple reasons. Less movement inside means less friction which means less issues with blistering on longer days.

It also makes a shoe with a decent amount of cushioning and a rock plate feel pretty responsive. You have complete control over what the shoe does and don’t have to compensate for the direction you think your foot will go when you hit uneven terrain.

The downside is that the upper definitely requires a break in period before it can be appreciated, and for those with higher volume feet or high arches I worry that the band accross the top of the upper may be too tight.

Even after running many miles in the shoe, when I put it on I don’t even have to tighten the laces because the band is already so tight. The only part of the laces that I actually tighten is the top just to lock my heel in place.

The dynamic flywire used in the Wildhorse 4 does a great job of giving you the ability to lock your fit down and tweak it as necessary. For those not familiar with Flywire, it is part of the lacing system.

The laces are weaved through a string like material that attaches to the base of the upper. This gives you the ability to pull on the laces and therefore tighten the flywire and get a more precise and locked down fit.

I am especially fond of the two top flywire cables that angle back toward the heel and allow for a nice and snug fit in the heel area of the shoe.

One downside to having exposed flywire and the midfoot band on a trail shoe is that if you’re running in any sort of grassy area it can get caught on the flawier or mesh.

There were multiple occasions where I had to remove clumps of grass from these areas.

The space mesh material is more thick and durable than it is breathable but the shoe did drain surprisingly well when completely soaked. The shoe has average to slightly below average breathability.

The breathability is compromised due to a third of the upper being covered in a vinyl like material used in the midfoot fit system. This upper also has a strobel last meaning it is stitched to a full length piece of fabric.

This translates to what is essentially full bootie type construction inside the upper aside from too small exposed areas one on the medial side and one on the lateral.

I found it to be comfortable and seamless which meant no areas of irritation, rubbing or hot spots.

I think overall that the Wildhorse 4 is comfortable if you like a snug fit. It hugs the midfoot but it doesn’t necessarily feel narrow like you would think.

The shoe also allows a little extra room on the lateral side near the 4th and 5th toes. This leaves a good amount of room for your toes. It fits according to standard sizing when it come to length.

That’s not to say that this upper will be comfortable for everyone. I originally had issues with the shoe feeling a little too tight. I think this will be the case for a lot of people.

I have not run in previous versions of this shoe but if I could guess I would say that there are going to be a lot of people who are upset about this redesigned upper. I say that because of how different of a feel this shoe has compared to most.

After the initial break in period I found this shoe to be great for long days on the trail. My favorite part about it is the amount of protection it provides.

The combination of a rock plate, a more rugged mesh material and the midfoot fit system along with a toe guard make you feel very protected.

As the day goes on and I’m on my feet longer and longer I have a tendency to get a little sloppy with foot placement.

The longer I ran in the wildhorse 4 the more I was able to appreciate it and the protection it provided. In addition it grips very well.

Despite my personal appreciation for this shoe I know that it won’t be for everyone. Those with a high arch or high volume foot requiring a wider fit will not be happy with the way this upper fits.

The midfoot fit system does a great job at minimizing lateral movement of your foot inside the upper which makes it pretty responsive.

I personally liked the fit of this upper more than the Salomon Sense Max Pro which I am currently testing and will review soon.

Runners who enjoyed the previous version of this shoe should expect a pretty large difference in the fit of the upper but can the same midsole and outsole feel.

We purchased a pair of Nike Wildhorse 4 at retail at runningwarehouse, with our own money. This did not influence the outcome of the review, written after running more than 50 miles in them.