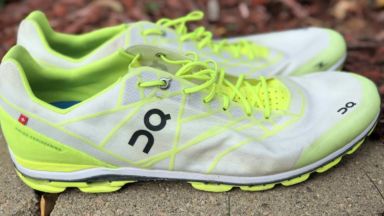 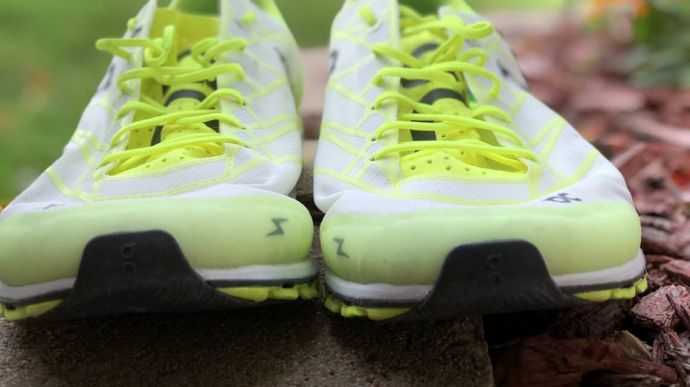 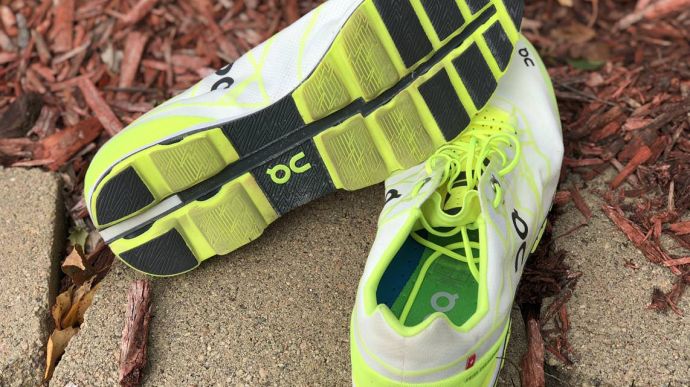 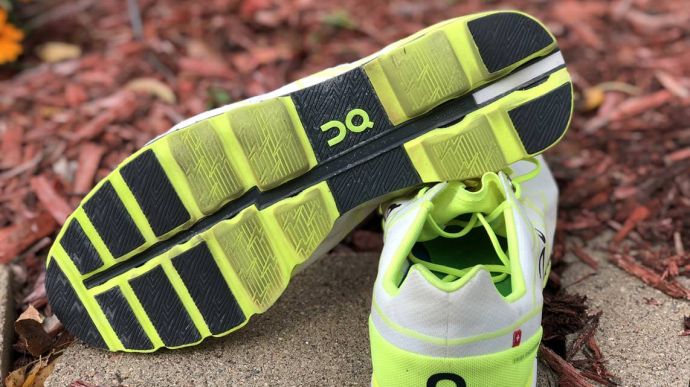 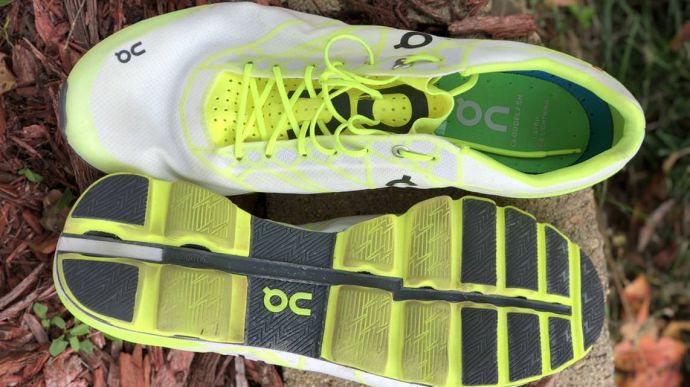 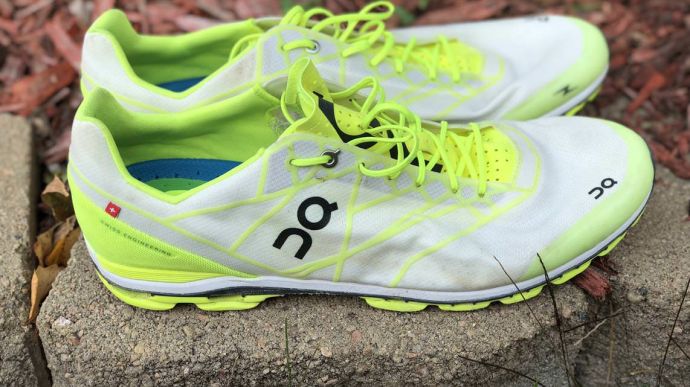 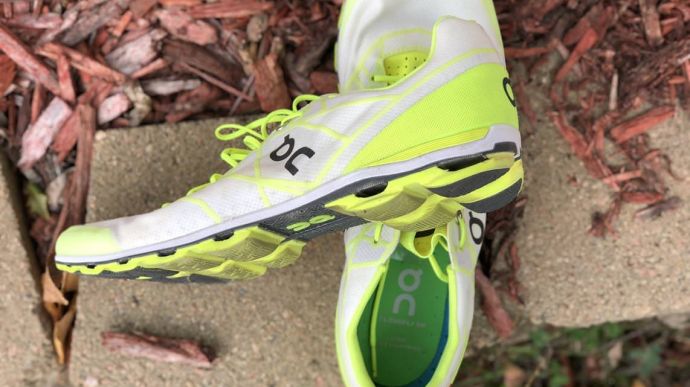 The On Cloudflash is the company's racing flat option. It is quick, responsive and lightweight, but lacks the padding to be useable in longer distance races.
WHERE TO BUY
LOWEST PRICE
$179
SHOE INFO
ON Running
Brand
Cloudflash
Model
Racing
Type
7.70 oz. (218 gr.)
Weight
180 US$
MSRP
5 mm
Heel Drop
WHO IS IT FOR
This shoe is for experienced racers. If you aren't pulling off 5ks in sub-24:00, and 10ks in sub-50:00, then these probably aren't for you.
Help me choose

The On brand is known for their cloud lugs which add padding while minimizing weight. In this offering, the company has put together a super lightweight shoe that is geared for the starting line of a fast race.

They hit the mark in almost all those aspects. It is quick, light and ready to help you set a 5k or 10k PR. However, in doing so, they shut out a whole group of runners (non-competitives).

The lack of cushion means these shoes will really only be appealing for serious — and seriously fast — racers. *Notice the use of the word “racer” not “runner”.

The On Cloudflash is designed for the fleet footed runner as they prep for a new PR. This shoe is top-of-the-line for On for racing gear. This shoe joins the smaller segment of offerings known as “racing flats”.

However, this shoe has the distinction of having a higher price tag than any of those other offerings.

When this shoe showed up, I was very impressed by how it was both flashy and subdued at the same time. With a bright, clean white as the base color for the majority of the shoe, it doesn’t draw the eye immediately.

However, once you do look, there is a nice amount of added volt yellow to give it some flash. It’s a nice combination.

When I first put them on, I immediately felt grounded. There was a nice thin layer of protection, but it didn’t feel as if there was even an ounce of extra.

When I tried to wear them for more than just a run, it was almost too little for more than a couple of hours. There were pressure points that hit the longer they were on my feet.

On my first run in these shoes, they performed very admirably, and were very responsive the entire way. However, towards the end of a scheduled 5-mile run, my feet felt a little beat up.

The sole unit uses the patented On design of the Cloud lugs. This sole unit uses 14 of the signature lugs which work both to cushion and transfer energy.

These lugs are made with foam, and include blown rubber on the toe section. This material works well to store the energy from your landing and transfer it into your toe-off.

However, for a larger runner, or on a longer run, this material breaks down and doesn’t offer the same energy transfer.

The company also uses a very hard sole plate above the lugs. This plate is called the “Cloudflash Speedboard” and is built from Pebax, a specialty elastomer that offers low material density and extremely efficient energy return.

On advertises that this board offers “unparalleled in energy transition and fatigue resistance.” They also say that this Speedboard, when coupled with the Cloud lugs will load the impact energy and allow for the release of this energy at toe-off.

The upper is made of a very lightweight and breathable mesh and at a size 13, fit true to size. This mesh keeps dirt out and lets air in.

Because of this, my feet never felt hot in these shoes, and — provided I was wearing the correct socks — they never got overly cold either.

The material moves with your feet and keeps a nice feel throughout the upper. The tongue is breathable and soft, adding the comfort.

With this said, however, there is a major problem while wearing these. The shoe laces provided are far too long, and the loops can fall under the sole of the shoes as your run.

Also, the type of lace chosen by On is very thin, and when fully laced and pulled tight, can cause undue pressure across the top of your feet. I only noticed this problem when I went past 5 miles, but it was a little sobering.

Overall, these shoes are great racers. However, they do not seem to have much else to them. I tried using them for regular training runs, and was disappointed each time.

They responded incredibly well when doing race simulation runs or while on the track. I believe that I would use them again for track workouts or if I have a 5k road race. But, I believe they’ll live in the closet when I try any other run.

The Speedboard was great while I felt strong and was awesome on the track. However, the hard plastic material became almost weaponized when my legs got tired and I lost my form.

If you have weak hips, you may experience this earlier than I did. During a couple of track workouts, and at least three other runs, my strength wained and I happened to clip my ankle with the foot passing through.

This Speedboard plate ended up cutting my ankles and caused a great deal of pain on those runs.

In the end, these shoes have their place. They are a great race day offering for the 5k and 10k crowd. And if you’re a serious racer, this offering could be great for you.

However, the rest of the crowd will likely avoid these shoes. And with a price tag of $180, you need to be serious about your racing to throw down for these.

We purchased a pair of On Cloudflash from runningwarehouse using our own money. This did not influence the outcome of this review, written after running more than 50 miles in them.

Visit ShopZappos
Sorry - Product not found. Please try RunningWarehouse.Com to check in their assortment.
This page contains affiliate links. As an Amazon Associate I earn from qualifying purchases.
WHERE TO BUY
LOWEST PRICE
$179

Similar shoes to ON Running Cloudflash