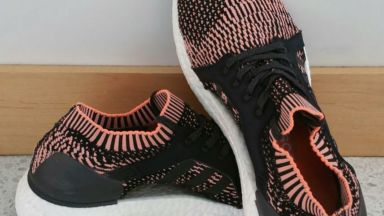 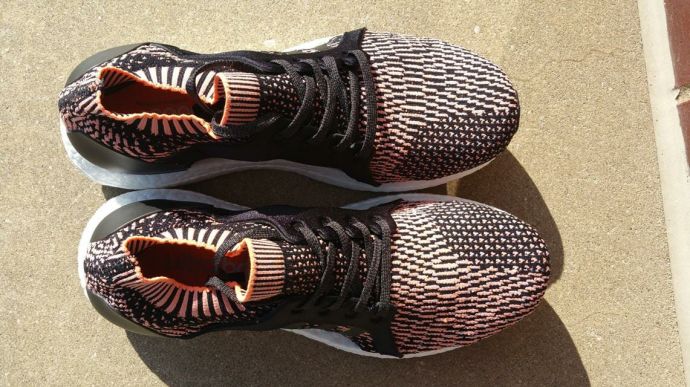 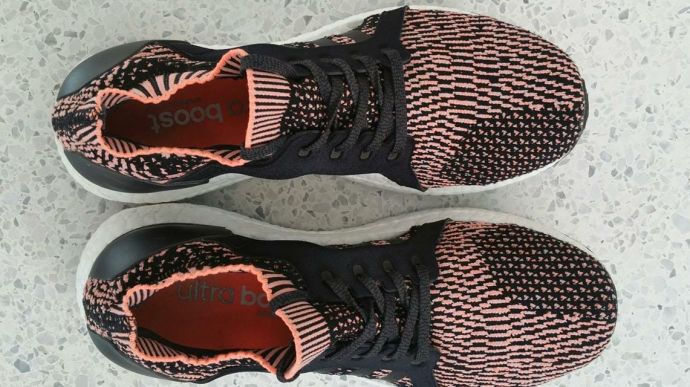 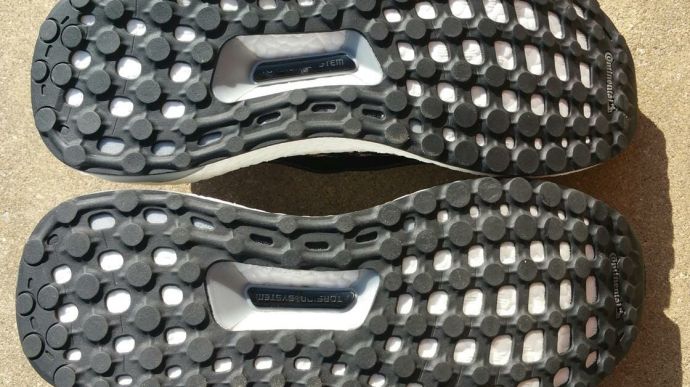 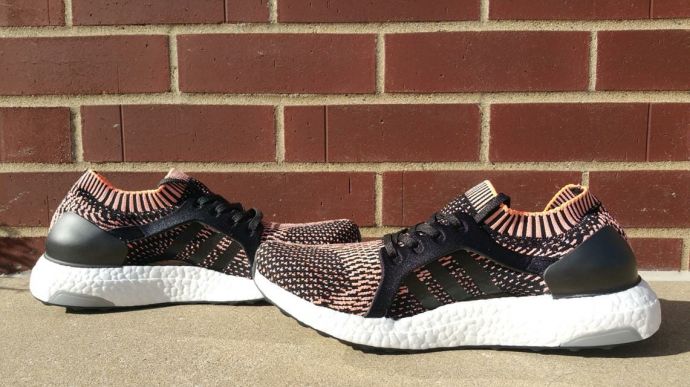 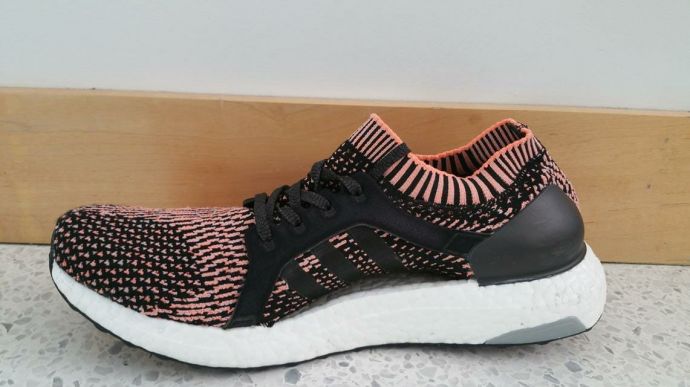 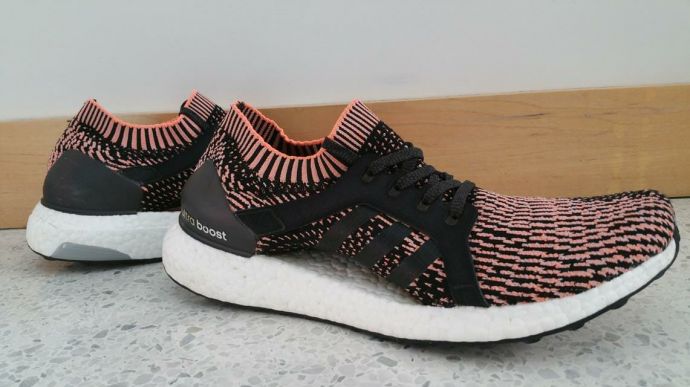 The Adidas Ultraboost X combines customized arch support in their experimental design, with plenty of their stellar Boost foam to create a "hugged by supportive clouds" feel, in this breakthrough women's-only model.
WHERE TO BUY
LOWEST PRICE
$87
SHOE INFO
Adidas
Brand
UltraBoost X
Model
Cushioning
Type
oz. (0 gr.)
Weight
180 US$
MSRP
10 mm
Heel Drop
Mar / 2018
Release Date
WHO IS IT FOR
Those who want midfoot support all around the foot yet don’t mind a flexible midsole, will find the low-moderate structure that they need, in Untraboost X.

The close, minimal upper whispers “pick up the pace,” while the cushion is more suited to comfortable miles, thereby making it an all-around training option, but it won't hold up over long distances for those with higher support needs.
Help me choose

This fun shoe has a lot to offer in arch support and custom fit, but it also comes with some drawbacks.

The flexible knit is girded around and under the arch by decorative-yet-functional adidas stripes and is actually separated from the sole where it pulls up to encase the foot.

The midfoot may feel too tight initially (read on for ways to deal), but once you get used to the shoe, it’s noticeably absent (and missed!) when wearing a regular trainer.

My first thought upon wearing was, “I loooove how this arch feels!” The wrap-around fit feels great while running, but one of my first workouts in this shoe included some alligator crawls followed by burpees.

While creeping along like a gator out of water, my feet started “hyperventilating,” feeling claustrophobic, with how tight these fit. Loosening laces a little (easier to do when not wearing) and going sockless helps with this.

And then look what I found?! Gal Gadot ate crawls and burpee broad jumps for breakfast (with her protein and antioxidants).

Us mere mortals can work out like Wonder Woman too (just sub some run intervals in for the rowing, if you prefer 😉 )

This shoe is designed to hug the foot, and since I’m sort of “between sizes” (measurement, thin foot, narrow heel and med-wide forefoot) and carry a preference for snug, I typically go with the smaller option.

I went with the half size up from my usual, in Ultraboost X. It fits great in the midfoot (once I figured it out). Because the design hugs my heel, even though I can easily slip an additional finger into the same space, it feels ok when wearing socks with the shoe. But that brings up another issue; it’s a bit awkward to put on, with socks.

Anything but thin, tight socks will pull and bunch. If your foot is sweaty—like you took the shoe off to loosen the laces—it can be difficult to slide back on.

In general I prefer wearing socks with running shoes, but this one works best without (except the heel fit, for the narrow). There is a seam where the extra heel padding ends that may bother some sockless feet.

It’s also a warm shoe…uncomfortably so with socks. Adidas also offers an Ultraboost X Clima Shoe which looks to be similar but with greater ventilation.

As we move toward the forefoot, the strip that adds the bit of structure to the upper is less giving where it attaches at the ball of the foot.

It’s difficult to loosen the laces while wearing—do so before putting on—but this will allow the room that a med-wide forefoot needs in the shoe.

A wide foot may fit best in a full-size up from normal running shoe size, while a narrow foot throughout might be able to go with regular size IF you’re ok running sockless.

If not, go up half size. Either way, foregoing socks will help ease fit and heat problems that many experience with this shoe.

The snug fit reminds me of Brooks PureCadence, yet this Brooks shoe offers a better heel fit, for my foot, and a touch more stiffness to the arch. The drop is 4mm as opposed to Ultraboost X’s 10, so it’s a different shoe in that regard.

Similar shoes from Nike include the Lunar Apparent and Air VaporMax Flyknit Moc, which similarly hugs the midfoot, but eliminates the laces.

Since there’s a good amount of boost™ foam (kinda heavy) in this midsole, Ultraboost X weighs in with some mid-weight stability shoes, matching ASICS GT-1000 and Dynamis, and is actually .1 oz. heavier than GT-2000 6 while only .1 oz. lighter than Nike Structure (in size 10 for the adidas and 9.5 for comparisons).

The weight is light enough to work well for me, but don’t let the minimal look and woven upper make you think it’s especially lightweight.

Ultra Boost X features adidas’ stellar boost™ cushioning system, made up of thousands of TPU pellets that have been fused to make one of my favorite midsoles. The cushion feels great, and it bounces back for energy return.

It’s a bit heavy as far as midsole materials run, but it packs a comparably strong punch in durability.

Despite the ample boost™, this shoe is more responsive than the brand’s Supernova, which also has a fair amount of midsole, though it’s not quite as snappy as the thinner layer in Adizero Tempo 9.

There is a small piece of TORSION® SYSTEM plastic in the midfoot of the sole unit to resist excessive movement throughout footplant; the shoe still flexes readily, however. Additionally there is a plastic piece in the medial heel.

This outsole performs well but wears down more quickly than is marketed. With about 70 miles on the shoe I’m seeing typical wear patterns.

The Primeknit upper fabric is similar to woven cloth and feels like wearing socks. It allows natural airflow into the foot-chamber—if there’s no additional sock layer.

When wearing socks the shoe soon feels uncomfortably warm even if doing minimal activity. The sockliner is comfortable but sticks to the foot and bunches when taking the shoe off; securing it to the upper would be a good move for adidas.

The Dynamic Arch design wraps around and under the arch, supporting it and adding a unique flavor to the shoe’s appearance, since it does not connect to the midsole.

The saddle that provides structure to the upper can dig into the foot if laces are too tight. Taking the shoe off to loosen laces is the easiest way to get this shoe customized.

Moving on back, the heel counter offers beneficial support—especially for a med-wide heel—without cutting into the skin due to the Achilles cut-out and an extra pad inside the posterior of the upper.

The take away for Ultraboost X is that the extra-snug design of this shoe can be suffocating until you figure out the best combo of lacing-tightness, sock/no sock, and activities for this shoe. Now that I’ve adjusted to it, I miss the snug arch when running in other shoes.

If adidas can fit this custom arch design onto the otherwise more supportive and responsive midsole of their Adizero Tempo, we’d have one of my favorite shoes.

Despite all of the fit issues and the learning curve of running in this shoe, I still give it 3.5 stars because of the phenomenal arch fit. I think most will have a love-or-hate response to this unique shoe. Tell us your experience in the comments!

We purchased a pair of Adidas UltraBoost X from runningwarehouse using our own money. This did not influence the outcome of this review, written after running more than 50 miles in them.

Visit ShopAmazon.com
This page contains affiliate links. As an Amazon Associate I earn from qualifying purchases.
WHERE TO BUY
LOWEST PRICE
$87