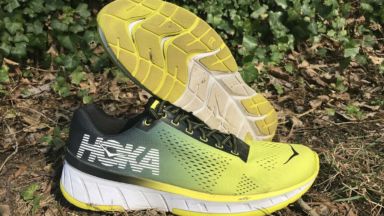 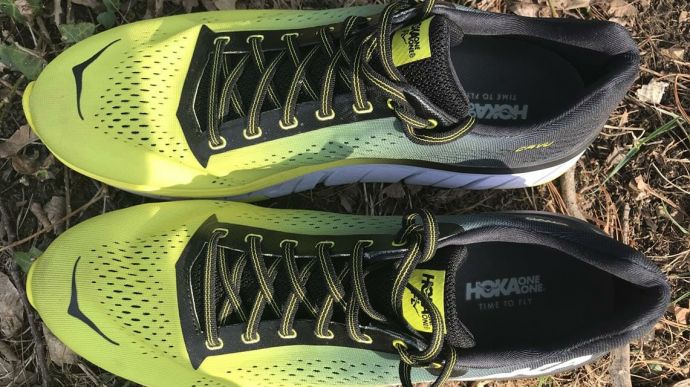 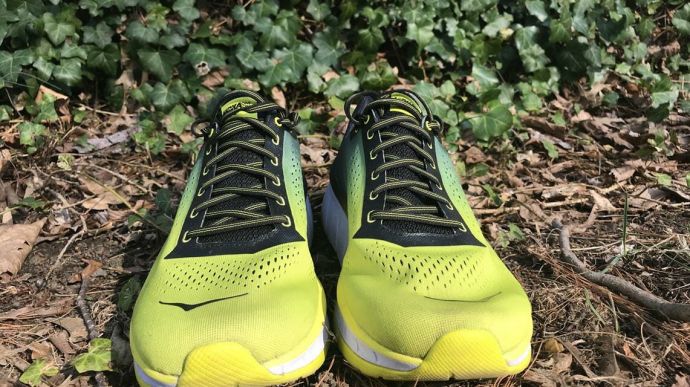 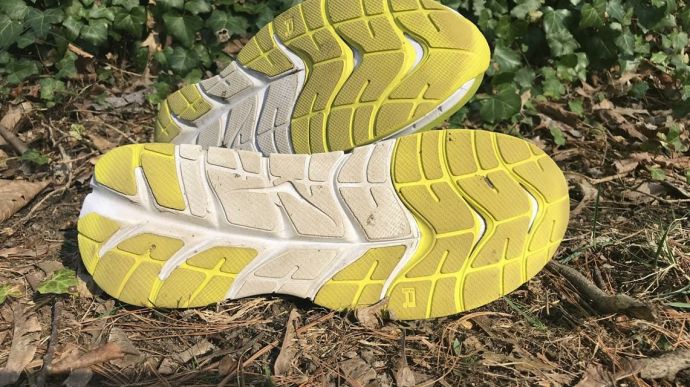 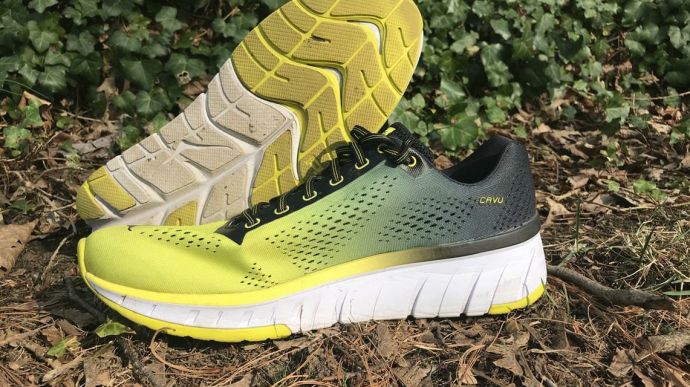 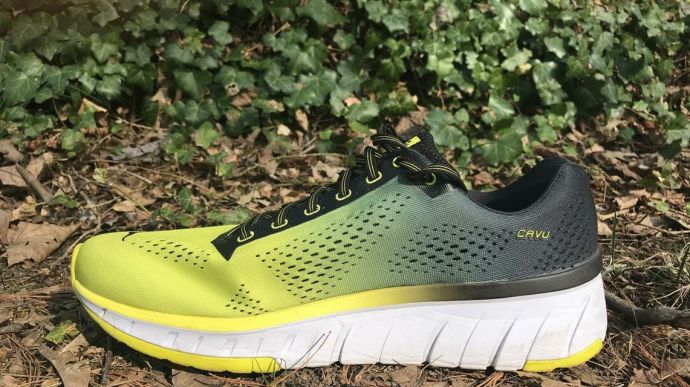 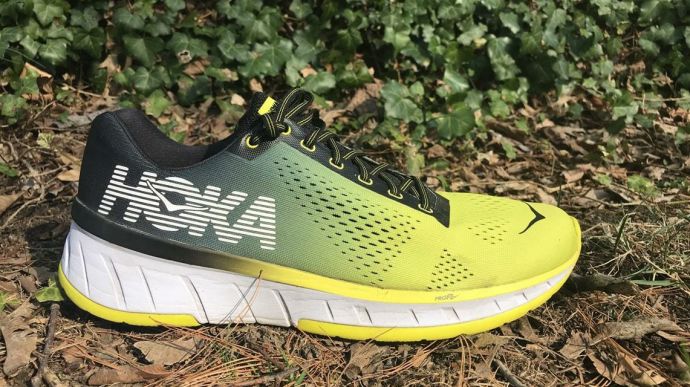 The Hoka One One Cavu is a new trainer to race day option within the Profly line. It is for daily training runs and can be used for races; however it lacks a truly fast feeling. It is a promising shoe as to what is to come for the future of this new Hoka One One offering.
WHERE TO BUY
LOWEST PRICE
$159
SHOE INFO
Hoka One One
Brand
Cavu
Model
Lightweight
Type
8 oz. (227 gr.)
Weight
110 US$
MSRP
4 mm
Heel Drop
Feb / 2018
Release Date
WHO IS IT FOR
The Hoka One One Cavu would be useful for intermediate runners up to the half-marathon distance but may lack the fast turnover feeling for more experienced runners.
Help me choose

Hoka One One recently launched a brand new line of shoes under the name ProFly. With this new launch comes three new neutral shoes; the Cavu, the Mach, and the Evelon.

Hoka One One Cavu General Info

The Cavu features a soft all mesh upper, and the use of the RMat cushioning that is surprisingly durable given the softness of the material.

Hoka One One Cavu – Lateral Side

The new ProFly midsole is featured in the Cavu creating a light weight shoe capable of being used for long runs and races alike.

The Cavu is not going to be as fast as the Hupana for example but provides more cushioning allowing for more of the wear and tear of typical training.

Competing with other similar lightweight training and racing shoes such as the New Balance Fresh Foam Zante and Saucony Kinvara; the Hoka One One Cavu, is distinct in how it handles cushioning in the rear versus forefoot.

The Cavu is much softer in the heel area of the shoe compared to the very firm forefoot. This is intended to act as a heel-strikers dream in that it can be soft and cushioned for a heel strike but provide a good push off forward.

Opening the box of the Cavu I as initially surprised at the light weight of the shoe given that it looks massive. The sole looks like one large block with areas of the RMat outsole in the rear and forefoot.

One oddity I noticed was that the top eyelet, the last one used for a lace-lock, or not at all was actually metal opposed to the other eyelets being punched through the fabric.

Hoka One One Cavu – Lace

It still after wearing this shoe feels odd to me to have it as a metal piece and I wonder what happened in wear-testing that led to this choice.

The first run in the Cavu highlighted the light snappy feeling of the shoe and introduced two minor issues to me. The first issue is this uncomfortable feeling in the arch of the foot which admittedly went away after the second or third run.

The larger issue is how the difference between the rear and forefoot of the shoe actually felt counteractive at times. At first the sound of a soft rear foot and firm forefoot seems like the shoe should be optimized for a rear striking runner.

This means your heel is the primary source of contact with the ground within each foot strike opposed to more of the middle or front of the foot.

Instead of being soft in the rear and transitioning smoothly to the forefoot for a push off, the Cavu seemed to fight the transition.

Hoka One One Cavu – Sole

This is not as pronounced as the effect in some other shoes such as the Nike Zoom Fly (which has this issue due to a stiff plate under the forefoot) but it can be problematic and uncomfortable.

When using a midfoot strike the shoe is much smoother and creates a very different experience.

Hoka One One Cavu Sole Unit

The sole of the Cavu consists of three main features. There is the differential in the cushioning from rear to forefoot which could be felt, less of the typical Hoka One One rocker feeling, and the RMat outsole.

The RMat outsole is pockets of a different material placed in areas that are more likely for the runners foot to make contact with the ground. This RMat material feels very soft to the touch but is more durable than expected.

Hoka One One Cavu – Medial Side

Hoka One One Cavu Upper Info

The upper of the Cavu is a single piece of mesh that is soft, breathable and comfortable. While I found the metal eyelet to be an odd choice, it did not cause any problems or discomfort.

The shoelaces were a little short when using a lace-lock lacing technique but never came untied or created any issues. The Cavu is a comfortable shoe to wear.

Hoka One One Cavu Conclusions

In general the Cavu is a good and promising shoe. It is light and durable and has a place within the Hoka One One line up for fans of the brand’s shoes who want a lighter faster shoe than the Mach (formerly the Clayton) and a more durable option over the Hupana.

Personally it falls short compared to other shoes of different brands that are in the lightweight, train to race day option. The biggest difference comes from how the shoe does not feel as fast.

One of the reasons that the shoe does not feel as fast is how it transitions from rear to forefoot especially with a rearfoot strike.

Another reason with an improvement that I think Hoka One One could make to the Cavu, is to give the shoe a more aggressive toe spring; make the toe area of the shoe more angled up.

The Cavu does not feel fast off the toe either and adjusting the feeling of the push off for the runner could help with that feeling. Sometimes it feels like you are taking the Cavu for the ride and maybe not the other way around.

Add up these feelings with the light weight and durability positives and the Cavu is still a good shoe. But maybe an iteration or two away from being a great one.

We purchased a pair of Hoka One One Cavu from runningwarehouse using our own money. This did not influence the outcome of this review, written after running more than 50 miles in them.

Hoka One One Cavu Price Comparison

Visit ShopAmazon.com
Sorry - Product not found. Please try RunningWarehouse.Com to check in their assortment.
This page contains affiliate links. As an Amazon Associate I earn from qualifying purchases.
WHERE TO BUY
LOWEST PRICE
$159

Similar shoes to Hoka One One Cavu

Hoka One One Cavu Review