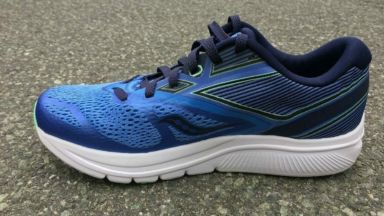 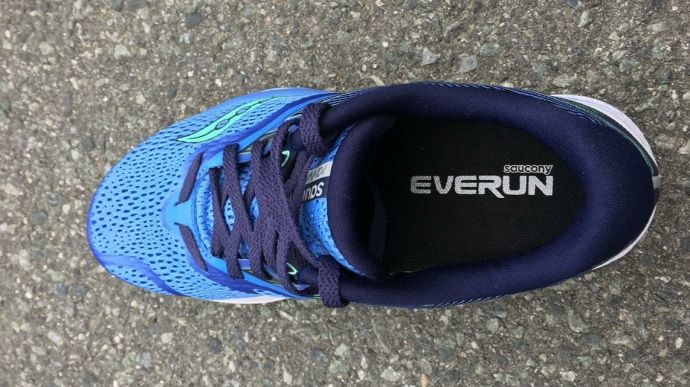 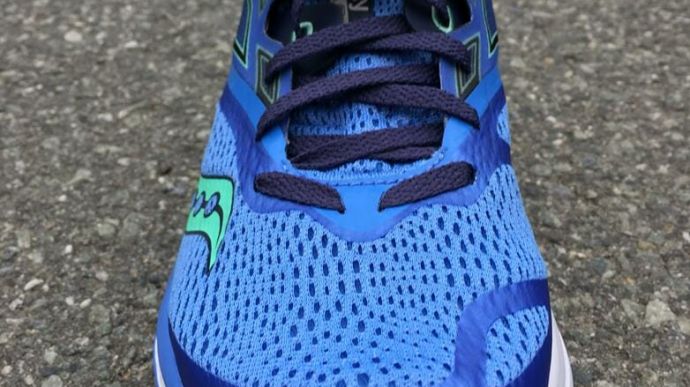 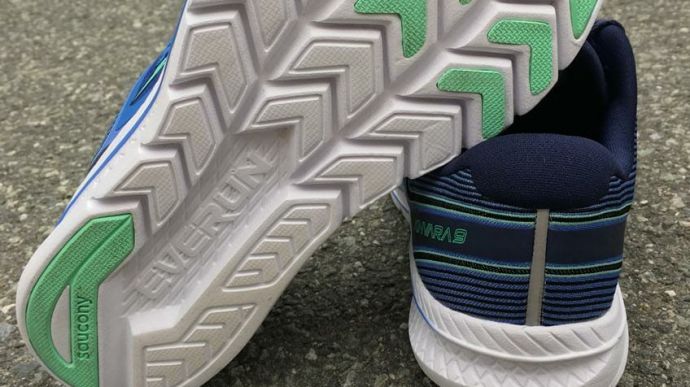 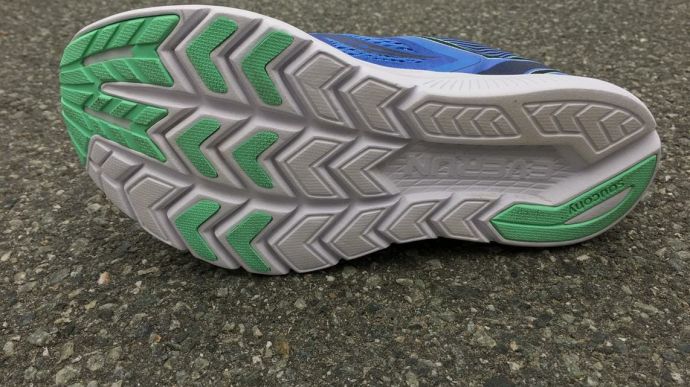 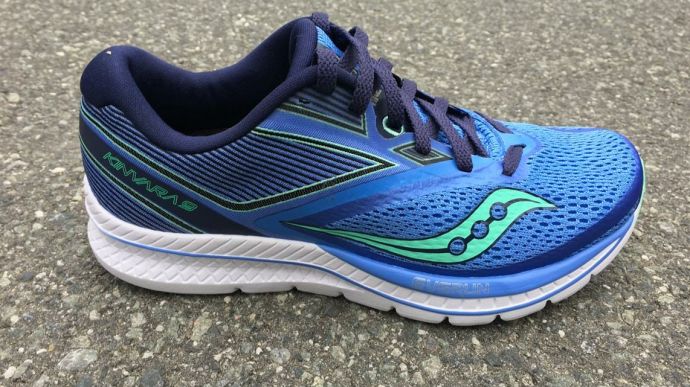 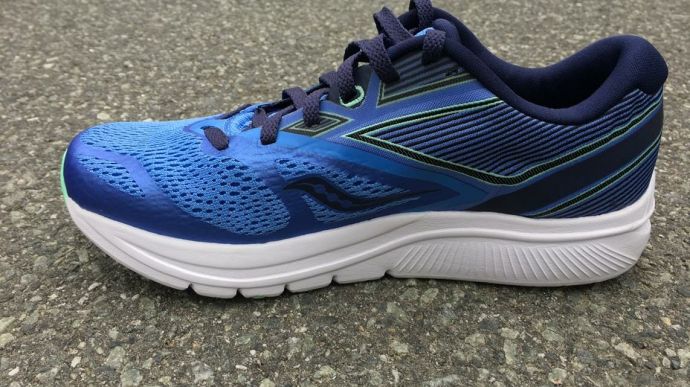 A few minor improvements to this 9th iteration include a low-profile tongue and revised configuration of blow-rubber in the outsole.

My first run in the Kinvara 9 was a fartlek on the treadmill which allowed me to get a feel for the shoe at a variety of paces in a controlled environment.

I was please to discover that the shoes required absolutely zero break-in. They felt as soft, lightweight, and nimble as version 8, and were slightly more responsive.

The outsole pattern and tongue profile have been updated, but the structure of the shoe’s midsole and upper remains the same and continues to provide Kinvara’s signature style and simplicity that has established the shoe as a cult-classic.

However, I was not thrilled that the Pro-Lock midfoot lacing system remained in this update. I forget about this feature every time I lace up a new pair of Kinvaras and always have to stop during my first run to loosen the constrictive mid-foot lacing.

The Kinvara 9 provides an expert balance of performance and comfort. This shoe is ideal for marathon long runs, moderate speed work, long tempos, easy runs, and everything in between.

The Kinvara is a staple in my shoe rotation as a reliable daily trainer. The Kinvara toe-box is not overly-wide, but provides sufficient space for toe-splay.

This year’s updates maintain the snug midfoot fit and 4mm drop of previous versions. The weight remains unchanged. I tested the shoe on the treadmill, road, gravel, and natural surface trails.

It performed best on paved surfaces, the treadmill, and groomed hard-packed trails, but can handle a more technical trail or coarse gravel if needed.

If you are a long-time Kinvara loyalist, rest assured that the 9th version maintains the Kinvara experience by continuing to deliver a consistently responsive ride.

The topsole and midsole are the defining features of this shoe that distinguish it as an ideal marathon trainer and race shoe. I have yet to run in a shoe that achieves a better balance of cushion and responsiveness.

Like the Kinvara 8, version 9 features an EverRun topsole that extends the full length of the shoe to provide a forgiving landing without sacrificing energy return.

The Kinvara 9 midsole is dense yet surprisingly soft. The midsole unit is comprised of a resilient EVA+ foam. EVA+ is a high-abrasion EVA foam that is intended to maintain its integrity longer than standard EVA.

The Kinvara 9 midsole is durable enough to be exposed to ground contact on the outsole of the shoe without rapidly deteriorating.

Although, when compared to competitors with a full-blown rubber outsole, the Kinvara is not as durable. In my opinion, the limited use of blow-rubber worthy trade-off for reducing the weight of the shoe.

This keeps the shoe lightweight while strategically maximizing traction. This update to the shoe slightly reduces the amount of rubber in the outsole by removing the pattern of rubber along the lateral arch and concentrating it under the forefoot.

In my review of last year’s Kinvara 8, I noted the lack of injection-blown rubber along the lateral forefoot as a vulnerable location for accelerated wear and a potential problem for supinating runners.

This issue is corrected in the Kinvara 9, which expands coverage of injection-blown rubber across the entire width of the forefoot.

The two predominant technical features of the Kinvara’s minimal upper, the Flexfilm and Pro-Lock, are repeated in this year’s update. In fact, very little has changed in the design of the upper from version 8 to version 9.

FlexFilm is a lightweight, flexible overlay that is melded to the upper of the shoe to provide a seamless and flexible fit that moves naturally with the foot.

This year’s model limits the use of Flexfilm even more than previous versions, employing this technology primarily around the laces.

The Pro-Lock lacing feature is an internal strap system located underneath the upper around the midfoot. This feature is the only disappointing aspect of the shoe. WIth every update to the Kinvara, I hope that the Pro-Lock component will disappear.

The purpose of the Pro-Lock is to to provide a super-snug fit that hugs the midfoot. I find the Pro-Lock to be unnecessary and constrictive.

It limits the natural movement of the foot. This faulty technology can be easily overcome by substantially loosening the laces at midfoot to relieve any soreness or tightness caused by the Pro-Lock.

For a runner with a wide foot, low arch, or flat arch, this feature could cause discomfort.

The most significant improvement to the Kinvara 9 upper is a new, slimmer tongue that provides a more streamlined fit.

While the Kinvara tongue was never cause for complaint, the thin profile of the updated version is a welcome improvement from the puffy pillow-like tongue of previous models. The tongue is soft and lays flat against the contour of the foot.

The shoe’s heel counter remains as forgiving and soft as it was in versions 7 and 8. It did not cause any blisters or rubbing against the Achilles.

The pioneering performance-driven design of the Saucony Kinvara has endured for nine years, making it Saucony’s flagship contribution to the running shoe market.

This year’s version upholds the foundational principles of the Kinvara line, providing a lightweight, soft, and responsive ride. In 2017, I relied on the Kinvara 8 for a successful season of marathon training and racing.

And after logging several miles in the updated version 9, the Kinvara will again be my shoe of choice for this year’s marathon prep. The Kinvara 9 is a reliable, versatile shoe that inspires confidence with every stride.

We purchased a pair of Saucony Kinvara 9 from runningwarehouse using our own money. This did not influence the outcome of this review, written after running more than 50 miles in them.

Visit ShopAmazon.com
This page contains affiliate links. As an Amazon Associate I earn from qualifying purchases.
WHERE TO BUY
LOWEST PRICE
$77