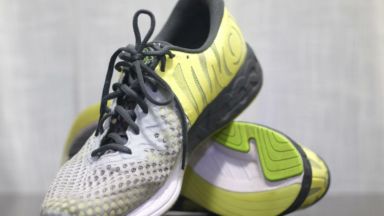 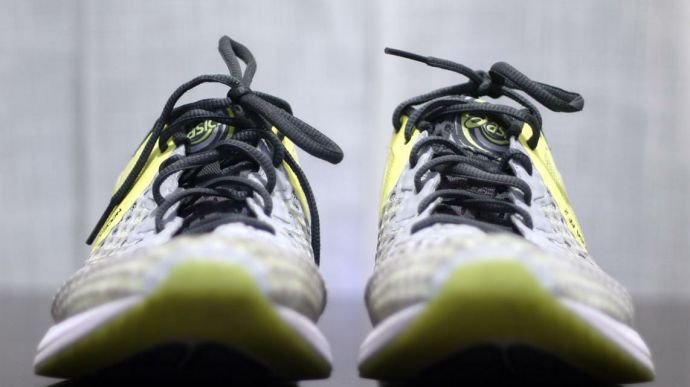 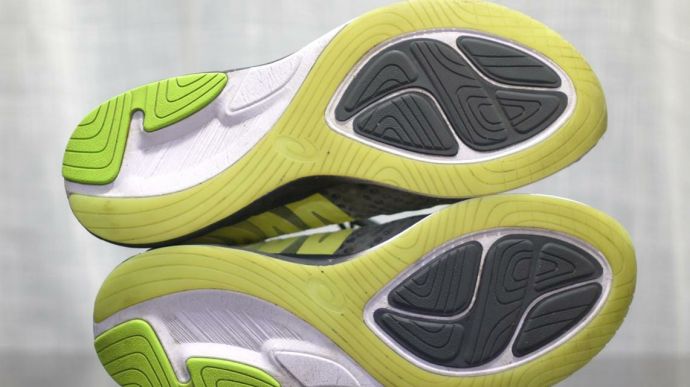 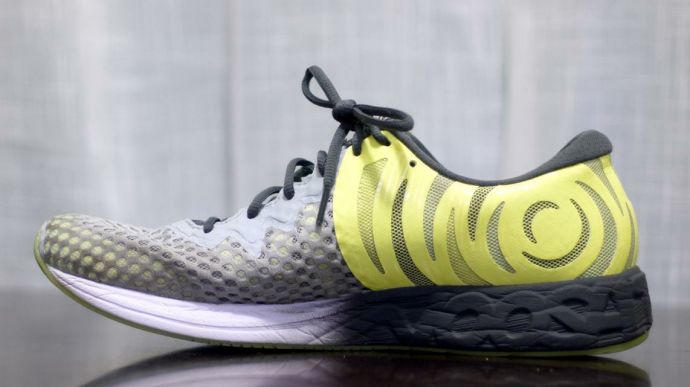 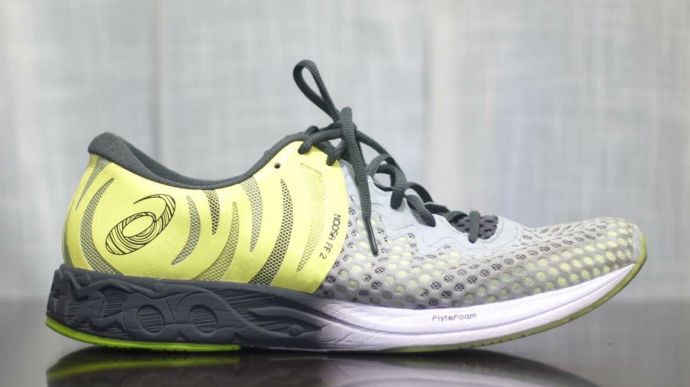 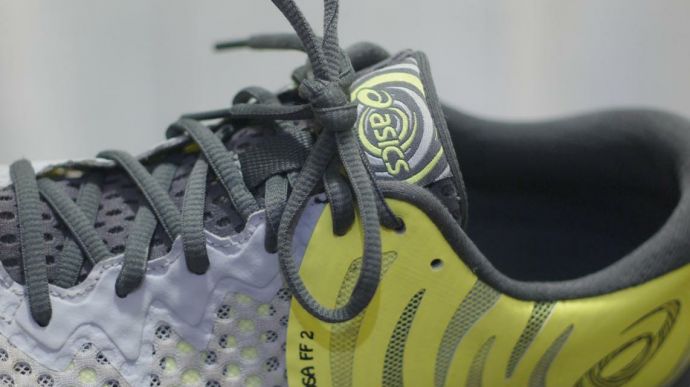 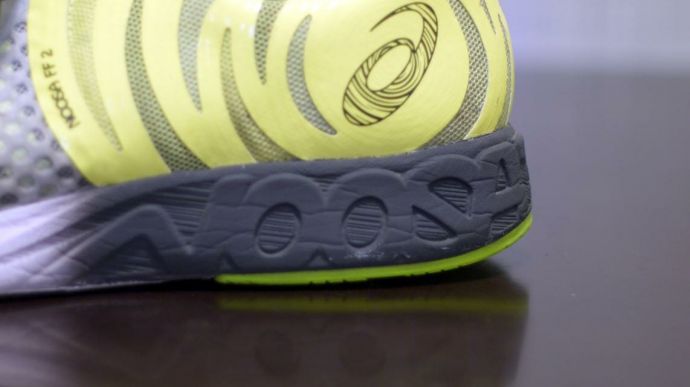 The Asics Noosa FF 2 is a smooth fitting race or training ready shoe with a design focused for triathletes. Several Asics specific tech features make this shoe a comfortable choice for most runners.
WHERE TO BUY
LOWEST PRICE
$140
SHOE INFO
Asics
Brand
Noosa FF 2
Model
Racing
Type
8.60 oz. (244 gr.)
Weight
140 US$
MSRP
10 mm
Heel Drop
Gel Noosa 10
Previous model
WHO IS IT FOR
This shoe is built for triathletes, but would still feel like a solid shoe for runners as well. Runners who are looking for a moderate drop (10mm) and who are neutral or underpronate should consider this shoe.
Help me choose

The Asics Noosa FF 2 $140 MSRP puts it in a competitive shoe market with other fast trainer/racer shoes for long distances.

All of these shoes are popular in the triathlon world because of their relatively lightweight design and long run comfort.

The Noosa FF 2 features a 24mm heel height and a forefoot of 14 mm which gives runners a 10mm heel to toe drop.

Interesting to see this much of a drop considering other shoes popular with triathletes like Hokas or Altras usually have a drop less than 4mm.

This sets the Noosa FF 2 apart from the rest. The shoe weighs in at a respectable 8.4 ounces so you’ll enjoy the lightweight feel during training or during racing.

Asics came out with the Noosa line to support the needs of a triathlete.

These different needs when compared to standard running are shoes that go on quickly, shoes that offer a comfortable sockless experience, shoes that are made for longer races (up to marathon distances), and shoes that are light but supportive.

Asics used a few existing pieces of tech in this line of shoes to make them race ready and daily training ready.

I was pumped to check these shoes out as I’m starting to take triathlon racing seriously and want to know if there really is a benefit for getting triathlon shoes vs regular running shoes.

Since I don’t really run sockless much, I did the majority of testing with socks. I can say the shoe feels like you won’t have problems if you like to run sockless.

First time lacing up the shoes and they did feel ready for a 5k+ race distance. Had no trouble keeping up with me on my 10 mile loop around Boston, so I was eager to push them in speedwork and longer runs over the next 50 miles of testing.

Asics kept close to their previous Noosa FF sole design, starting with the outsole. Their dual choice of rubber along with pattern is designed to grip better even on wet surfaces.

I looked into their “WET GRIP Rubber (TM)” outsole, anticipating to find only baseless claims of grippiness with no science, but found a nice explanation that makes some sense.

They start with rubber mostly used for studless snow tires (so a soft rubber that stays soft even in the cold) and mix in other materials like chaff.

These other materials stick out past the rubber to increase the contact area of the shoe. I’ll have to assume the chaff Asics is referring to is the dry inedible plant material usually from cereal grains.

Odd stuff to see in a shoe, but I like the tech! Does it work? I think so, I had a few wet runs in Boston with the shoes and didn’t feel the shoes slipping more than normal.

The real issue is that most running shoes have fairly good grip in the wet, and unless you’re running on smooth concrete or bricks, you’ll have enough traction already.

Above the WET GRIP Rubber (TM) outsole is Asic’s FlyteFoam that is designed to give great energy return with the help of organic super fibers.

These organic super fibers reduce the packing out that happens with more standard lower density foams. Apart from giving the shoe the “FF” name, the FlyteFoam tech really does keep the shoe light and bouncy.

It feels stiffer/more responsive than Nike’s Lunarlon foam, less squishy than Saucony’s EVERUN foam. Probably best suited for someone who doesn’t want a lot of cushioning, but wants a light and efficient shoe for the long run (this is Asics winking at triathletes).

Within the FLyteFoam is a Rearfoot GEL technology cushioning system to reduce shock. This is a common addition to many Asics shoes, where Asics has become a leader in reducing shock and making comfortable shoes.

Their GEL Nimbus shoes are one of the softest shoes I’ve run in, so the addition of their GEL in the rearfoot does make the shoe a bit more comfortable if you’re looking to reduce shock.

First,you don’t have too many color choices with the NOOSA FF 2. Black, or Yellow+Grey+Black for men, and Pink or Teal+Pink+Black for women.

Not a big deal, but be aware if you’re the kind of athlete that only buys gear in a specific color palette. I’m looking at you, crazy triathletes who try to match their shoes with their bikes (and now I’m one of them trying to find orange+black+white shoes).

Since color doesn’t really affect your running performance, I’ll move onto describe the rest of the upper. You get a very breathable shoe.

Super important to consider if you’re coming off of a bike and heading into a long run, or if you just want a shoe that breathes well.

Asics used a very open mesh design for the majority of the upper, where large holes with just a tiny mesh below it lets lots of air into the shoe.

The heel is a little more cut off from the air with a swirling asics logo and solid overlays, but that doesn’t affect too much of the shoe’s breathability.

One complaint with this minimalist upper around the toebox is that the outside of the upper seems to be a single piece of fabric, but on the inside of the same area of the upper beneath the toes is a small strip of fabric to reinforce the shape of the toe.

Everyone who makes a smooth looking shoe like this does it (Nike, Saucony, Skechers, Adidas), and it makes a difference if you have wide feet that might rub against this inner piece of fabric.

I’m one of those people. Not a deal breaker for me, just make sure to try these out before you buy.

The lacing system seems a little outdated. Sewn overlays around the eyelets and laces that pass over a springy mesh tongue makes that area of the shoe look a few generations older than what it really is.

Heat formed overlays (like how Nike did their eyelets on the Vapor Fly shoes), combined with thin that stays in place (like the tongue on the Saucony Freedom ISO or pretty much any shoe from Under Armour) would really spiff up the lacing system.

But in the end, this lacing system does the job and feels pretty standard. I just wanted more for $140.

Finishing up the upper is the heel. It’s a low risk comfortable heel without any overlays to make it rigid in weird spots, or floppy areas for looks (that extended tongue off of Adidas Ultra Boost shoes won’t get out of my mind).

But I think it’s a little odd the shoe has no pull tab to help you get the shoes on quickly. Considering that this is aimed at Triathletes who love to put shoes on quickly to have a fast T2, I’m a little surprised there’s no tab/loop/hook.

I always end up shoving my feet into tied shoes during T2, and use my fingers as shoe horns, so this tab won’t really help me, but I could see it being something other triathletes look for.

Heel is mighty comfortable when you get the shoe on, and that’s all that really matters, right?

The Asics Noosa FF 2 targets triathletes, hoping to lure them in with a light shoe that caters to comfort while not adding unnecessary weight.

Asics use of FlyteFoam and their GEL system keeps the landing comfortable, and their breathable upper keeps the foot from overheating.

Adding in a stiff heel that maintains shape if you’re the kind of person who mashes shoes on quickly and you can see that this shoe has the right stuff to go into the transition area with a triathlete (it’s even lighter than the predecessor).

However, the price point puts this shoe in a league of very competitive racing shoes that are not triathlete specific, so I would encourage triathletes to consider a few more shoes before landing on this one.

We purchased a pair of Asics Noosa FF 2 from runningwarehouse using our own money. This did not influence the outcome of this review, written after running more than 50 miles in them.