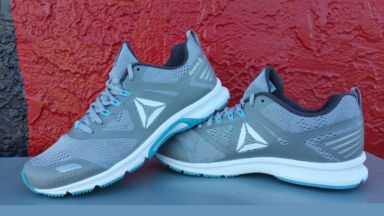 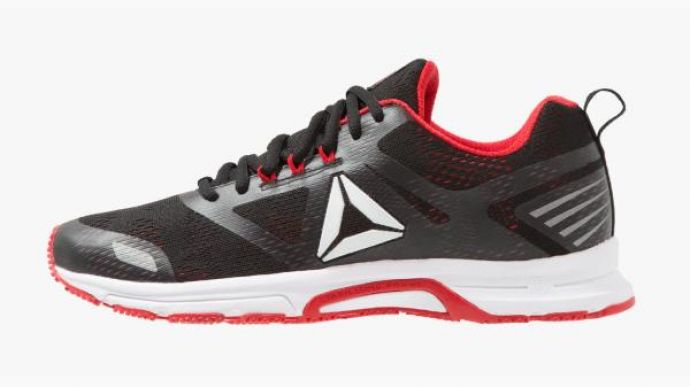 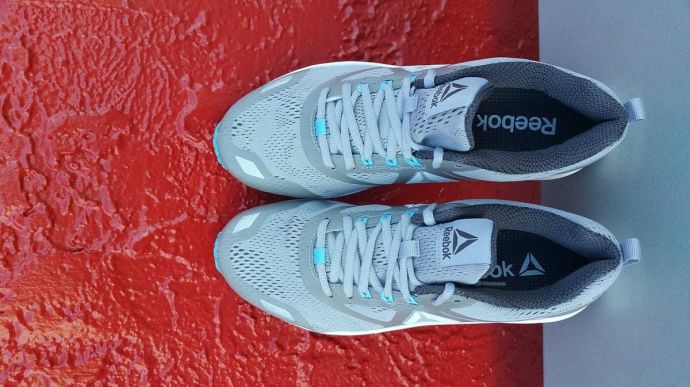 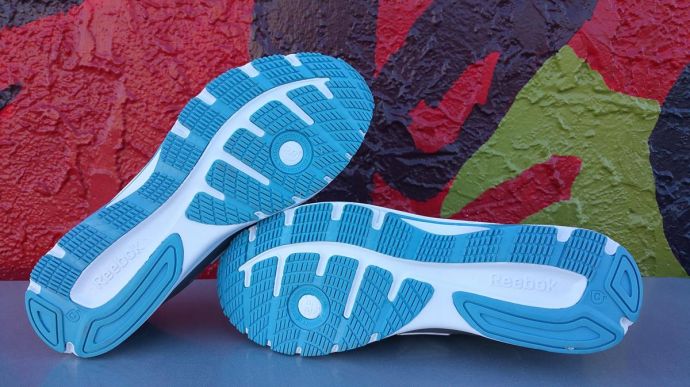 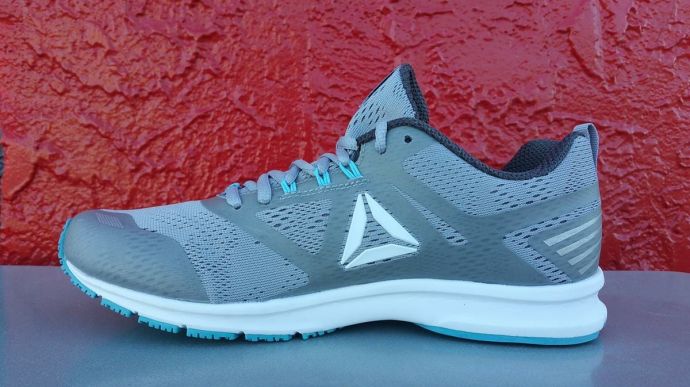 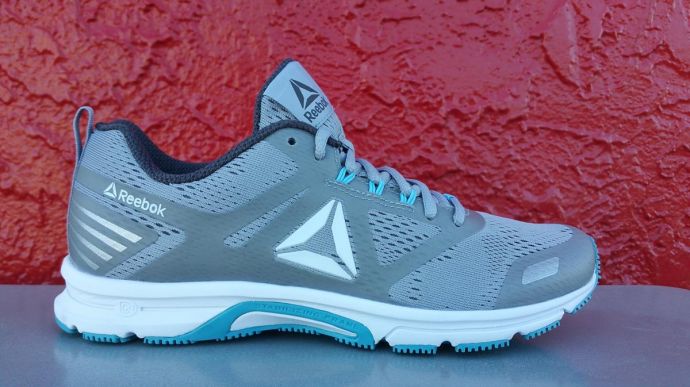 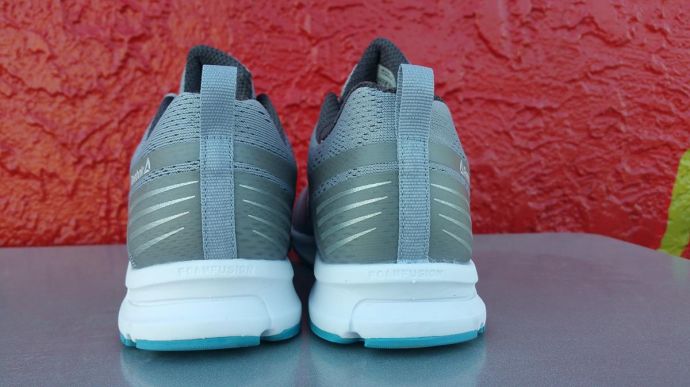 The Ahary Runner from Reebok offers the structure and cushion of a very basic running shoe: not a lot but enough to get you started for low cost.

The medium fit accommodates various foot shapes with the cap around the heel adequately countering excess heel movement, yet it lacks the padding needed for optimal fit in extensive training.
WHERE TO BUY
LOWEST PRICE
$65
SHOE INFO
Reebok
Brand
Ahary
Model
Cushioning
Type
11 oz. (312 gr.)
Weight
65 US$
MSRP
12 mm
Heel Drop
WHO IS IT FOR
This is a great shoe for new runners to test out the roads or treadmill in (because let's be real; you don’t love it enough for frigid blasts and extensive outdoor running gear—yet ;) ).

It's a basic trainer suitable for run-walk plans or the low-mileage runner with an efficient stride.
Help me choose

If the New Year brings in the desire for a new healthy habit, (return a Christmas present and) pick up Ahary for less than $60!

Not gonna lie, I chose to test this shoe because I wanted Reebok’s navy/coral upper print in my shoe reserve.

Obviously, by the pictures, that’s not what I got–maybe not available in the US, or perhaps out of stock–either way (deep breaths), I can deal.

How many years has Ahary been hitting the roads?

I wasn’t able to find any info on this, but it’s a lower-end neutral running shoe for Reebok’s line, using older technology to keep the price less than half that of Reebok’s innovation in the Floatride Run Fast, and still below their middle-line shoe Harmony Road 2.

When slipping on Ahary after spending the day in my old Nike Odyssey 2 (the green colorway matched Christmas apparel merrily), it was immediately apparent to me that it is an entry-level shoe: no surprises there.

It’s not plush, not super cushioned, doesn’t hug my midfoot or bolster-up my arch, but…

I took ’em for seven miles, the first time out, and they also didn’t feel stiff (requiring a break-in) or prompt any new blisters.

(My feet are plenty calloused, though, so don’t throw out the shoe [or habit] with the moleskin, if you get some hot spots. Seriously, try moleskin to help with those early rubs. https://www.target.com/p/dr-scholl-s-moleskin-plus-padding-roll-1-roll/-/A-14796060)

I was impressed by the secure ankle fit—but only after I tied the laces in lock lacing https://youtu.be/IijQyX_YCKA
I used the very top holes on this shoe with no problem, to do a laces lock.

Lacing up for day two with Ahary, I noticed one small area of irritation from the front medial edge around the ankle, from the point on the upper rubbing.

For day two in the shoe, I tied laces the regular way: less secure, but it didn’t rub. For my 3rd run, I put a bandaid on the small injury and pulled the tongue over slightly; this allowed me to still use lock lacing without making it worse.

After 33 miles on the shoe in 5 days, the lateral edge of one heel was starting to ache (I need more arch support and cushion), and I noticed a significant indent in the forefoot of the midsole, as I ran my hand along the bottom inside the shoe.

A great test of midsole durability is how well this area holds up under the repeated pounding of the run. It turns out that this indent was in the sockliner, not the actual EVA (see Sole section for discussion)…does that make a difference?

The midsole holds up, and that matters; however the cushion of the shoe is compromised by the compressed liner.

I took a couple days off the shoe before getting 17 more miles on, in no more than 5 miles at a time (and that was pushing it).

Reebok’s advertises Ahary as, “a great fit for 5K to 5 miles” and lists it as, “designed for: 5K running, long walks, low mileage training.” After putting 50 miles on them, I find them best for run-walk plans up to a first 5k.

When the running bug bites and you decide to make more of a commitment, you may want a bit more cushion and support.

Without a big investment, try ASICS GT-1000, or GT-2000 for a few more dollars and a comparable increase in support, comfort and smooth ride.

Brooks Revel is another great shoe to upgrade to, with more neutral support (flexible upper) than the ASICS models but more cushion and support in the midsole.

Introduced by Brooks in 1975, EVA midsoles revolutionized the industry and quickly became the standard for lightweight responsive cushioning and remain the baseline player against which newer innovations compete.

Ahary’s actual midsole holds up well; the indent that I feel in the forefoot of the shoe is mostly in the sockliner, which is glued to the midsole.

After I pulled it out, I was surprised to note that the midsole indent is actually not much greater than the more expensive and well-researched new React midsole from Nike;

I do have double the miles on Odyssey React, however (50 and around 100), and my feet protest putting any more miles on Ahary to compare, because of the lower support.

The Nike offers much more support and cushion (as one would expect from the price) by way of a med-high arch and a less (yet still somewhat) flexible sole.

Ahary actually wins out in the grip and outsole durability, but this comes at a 1 oz. higher shoe weight.

A groove reminiscent of ASICS’ GUIDANCE LINE™ technology runs along the base of the shoe and functions similarly to split up the force applied to the shoe and guide its motion.

I cannot find any information listing the shoe’s offset from heel to toe, but it feels like between 6-8 mm.

Reekbok calls Ahary’s upper “Camouflage engineered mesh,” a name that confuses me except that it is indeed engineered mesh; the “camo” part must mean the light-support overlay strips that sidewall the midfoot in triangle pattern.

This upper is breathable and is enhanced by reflective detail around the heel and toebox tips to aid visibility. A pull-tab behind the heel is there to assist putting it on.

The low-cut design allows for freedom of movement; one tip coming up to the medial tongue dug into my ankle when wearing low socks and tying securely.

Thin webbing loops make up the middle the shoestring holes. It has the look of Nike’s Flywire technology, but the loops do not run through Ahary’s engineered mesh upper, as is visible in the Nike Zoom Pegasus Turbo https://www.nike.com/t/zoom-pegasus-turbo-mens-running-shoe-Z163c3

Fit is true-to-size lengthwise, on the narrow edge of medium for the width. It feels about like it costs: adequate but not exceptional.

Ahary is an entry-level shoe for emerging runners testing the roads. I found that three miles was about as far as I wanted to go in them at a time—but that’s no problem, because Reebok doesn’t claim it’s for high mileage.

Expect this shoe to hold up decently well for casual use and run-walk programs, but research your specific needs when you start throwing around the words like “runner” and “training” to find a shoe that will keep up!

We purchased a pair of Reebok Ahary Runner from amazon using our own money. This did not influence the outcome of this review, written after running more than 50 miles in them.