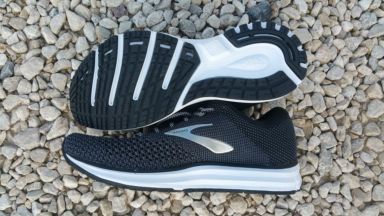 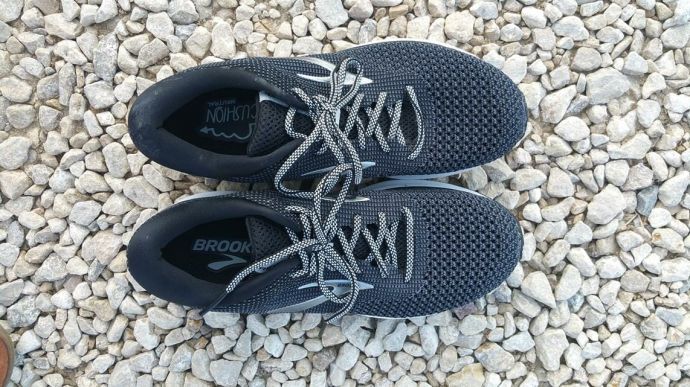 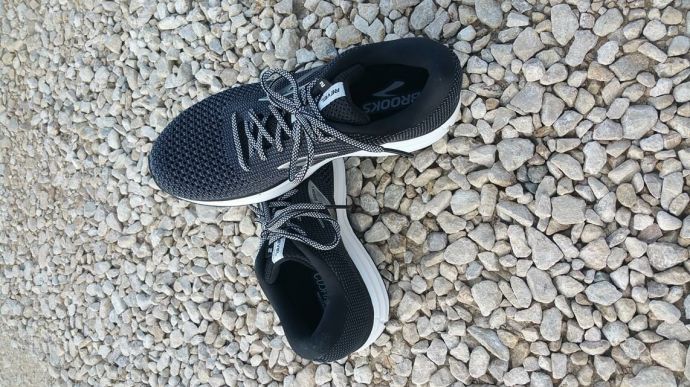 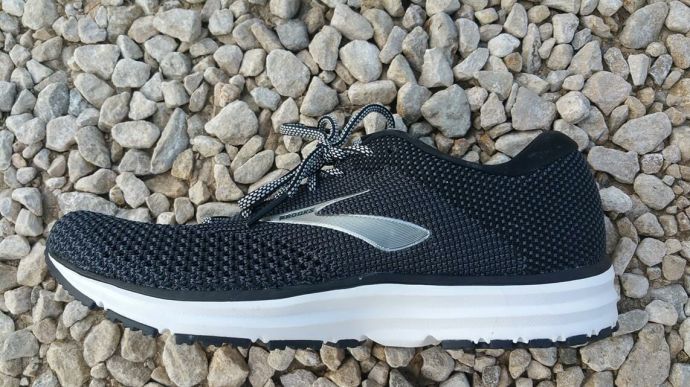 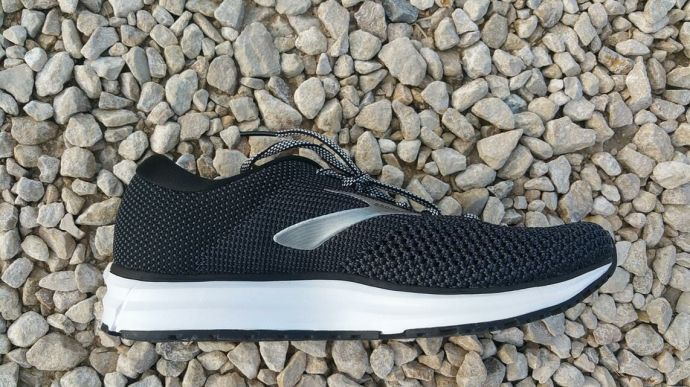 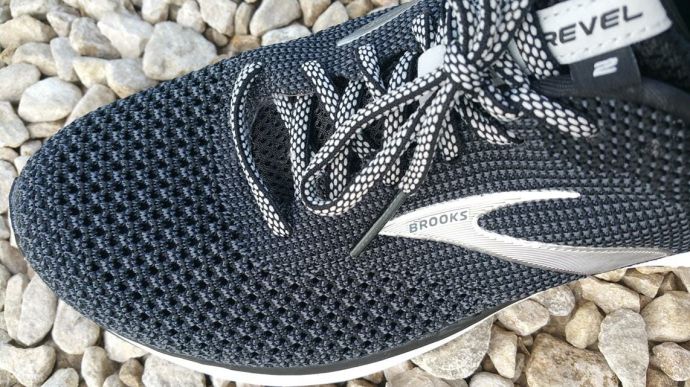 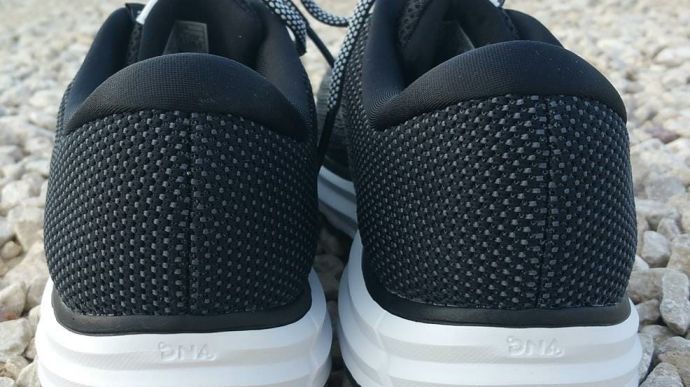 The Brooks Revel 2 combines a fun, secure upper with a cushioned, neutral platform to continue this line’s appeal of all-day use along with quality at low cost.
WHERE TO BUY
LOWEST PRICE
$99
SHOE INFO
Brooks
Brand
Revel 2
Model
Cushioning
Type
10.20 oz. (289 gr.)
Weight
100 US$
MSRP
12 mm
Heel Drop
Jul / 2018
Release Date
Revel
Previous model
WHO IS IT FOR
This shoe is perfect for those wanting a dependable running shoe that doubles as an attractive street shoe, all for only $100.

It works well as an everyday trainer for all types of runs for the neutral runner, shorter runs for those who want more structure in a long-run shoe, and the arch is medium to medium-low.
Help me choose

Revel 2 has a lot of good things going for it, for a low-priced shoe. It’s designed to be a running shoe that looks like a casual shoe, and it hits the mark. The 3D knit of the upper is mesmerizing–I love it!

Beneath it in the front half of the shoe is a soft, thin “sock.” It seems the look that adidas was going for in their Ultraboost, but this shoe combines the outer knit and inner bootie into one more flattened-knit sheath.

I’ve never run in Ghost, but based on spec information and Andrew’s review of the first Revel, I can safely say Revel is a scaled-back version of the Brooks Ghost, a more beefed-out “running-looking” trainer.

The last shoe that I ran in, ASICS GT 1000 7, is also a budget shoe, and I prefer Revel 2 in all but one category. Revel wins in heel fit (narrow, medium-plush, no-slip), overall comfort, appearance, and midsole cushion (close to a tie on this one).

The 1000’s resistance to torsion in the mid-foot is something that I would appreciate coming over into Revel, but since it is a neutral, not stability, shoe, I’m not counting this against it.

Brooks lists this shoe for med-high arches, so I was expecting a bit more material under my arch where instead there’s a small, short rise.

There’s more to the arch than in Ravenna 9 (which was flatter than Ravenna 8), but it seems med-low to me. Lunarglide 9 and Odyssey React from Nike have a more broad arch that I would call med-high.

Upon unboxing, the look of Revel 2 struck me as comfortably intriguing. There’s a lot going on for a gray-black shoe, with the raised texture of the forefoot switching to a close-knit midfoot and then a wider weave in the heel.

Add in the shiny logo on both sides and spotted shoe strings, and what threatens to appear an artist’s collection of scraps comes together in an appealing way: the look works.

Revel 2 reminds me a lot of Nike Odyssey React in function and purpose. They are both cheaper versions of more expensive shoes, both have a great look for running and casual wear.

To follow are a few differences to help you decide between them:

Brooks’ BioMoGo DNA is one of my favorite midsole foams and a big reason why I wanted to try this neutral model.

The non-Newtonian gel blended throughout the biodegradable BioMoGo foam is adaptive to the force applied to it, meaning that the higher the force, the stiffer it becomes.

Thus, the cushioning firms up for heavier runners and when more force is applied during up-tempo running.

The viscosity (thickness due to internal friction) of the midsole becomes softer and more flexible at low impact, allowing it to actually adapt to each unique combination of weight, stride, and pace applied to it.

The outsole is a basic segmented blown-rubber platform that offers smooth transitions but maintains some stiffness, more than say, the Brooks Ghost with its fully-segmented crash pad.

I am all-for this midfoot stiffness and could go for a small piece of plastic under the arch, like Brooks put in their Ravenna 8 (not the 9!), but hey, this is a NEUTRAL shoe.

So I’d say it leans toward the “low stability” side of neutral…just like the Ravenna 9 brought that line a step closer to the neutral side of low-stability, by removing the midfoot support. The outsole catches a small stone now and then.

Heat-activated yarn in this updated flat-knit upper holds its shape over time but has just enough flexibility to accommodate my “baby bunions” on both sides of my feet, to wrap the foot in a secure mold.

This upper is one of my absolute favorites: starting from the back a heel counter guides the foot, covered by medium-weave knit and topped with a plush, no-slip collar that extends down into the shoe.

The pattern changes to a tight loop into the midfoot, opening up into a breathably-attractive “3D” forefoot. All of this is subtly bicolor and lined by a thin, soft bootie.

The tongue is moderately plush and is secured to the liner on both sides to create a comfortable no-slip wrap, very reminiscent of Saucony’s ISOFIT technology in this aspect and in the heel collar.

All of this makes a winner for me, and then Brooks throws some extra spice on top with spotted shoe strings to complete the look.

I thought that the shiny logos on both sides of the shoe would bring in a low-light visibility aspect that was missing in the first iteration.

But unfortunately while the logos glimmer a bit closer up, they don’t “light up” reflective like my other shoes when I shine a beam across the lot.

Brooks was able to maintain the “run” in the shoe while making it look more “street.” You’re WINNING with this one, Brooks; keep it up 🙂.

We purchased a pair of Brooks Revel 2 from runningwarehouse using our own money. This did not influence the outcome of this review, written after running more than 50 miles in them.

VisitShopAmazon.com
Sorry - Product not found. Please try RunningWarehouse.Com to check in their assortment.
This page contains affiliate links. As an Amazon Associate I earn from qualifying purchases.
WHERE TO BUY
LOWEST PRICE
$99
AVAILABLE ON SALE:Previous model $68