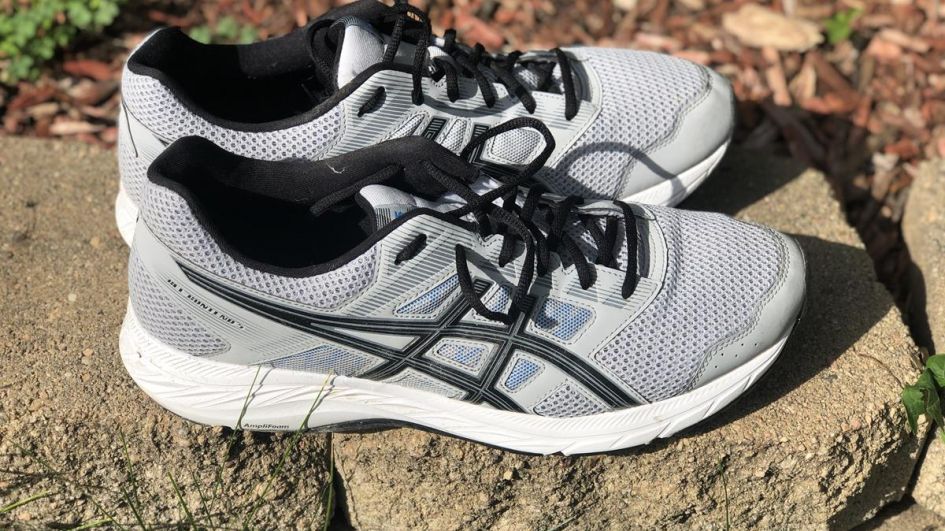 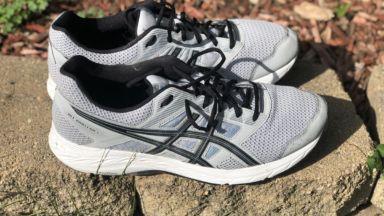 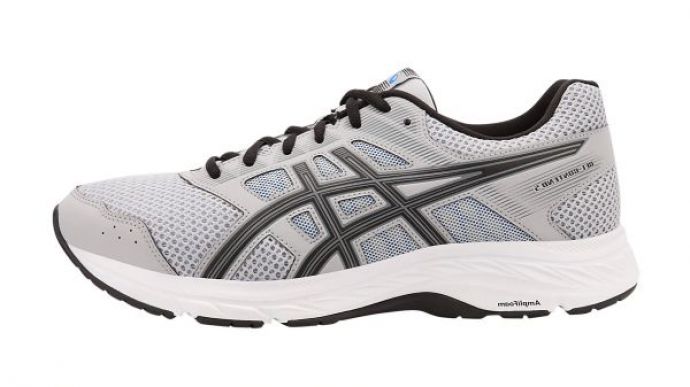 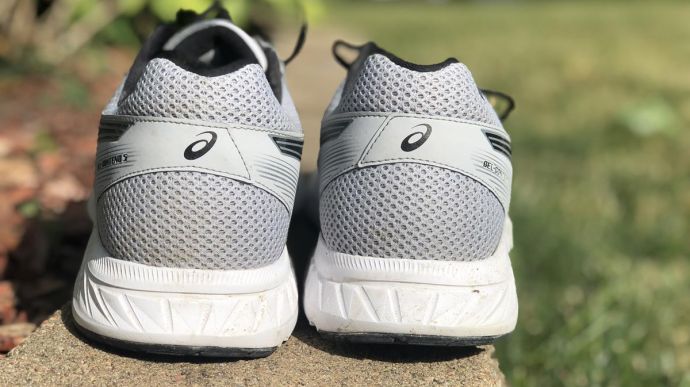 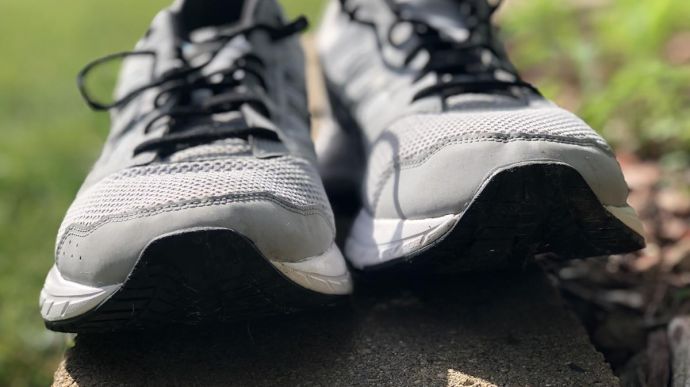 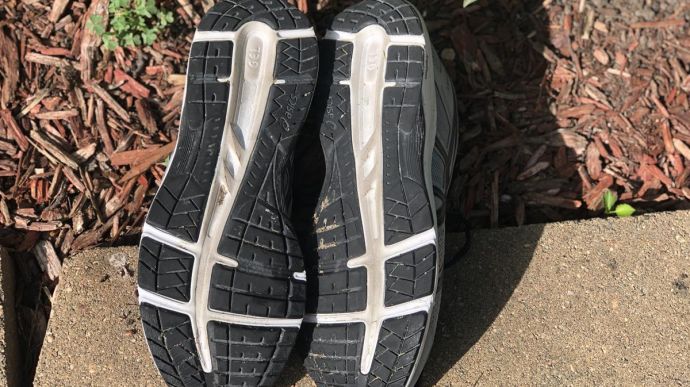 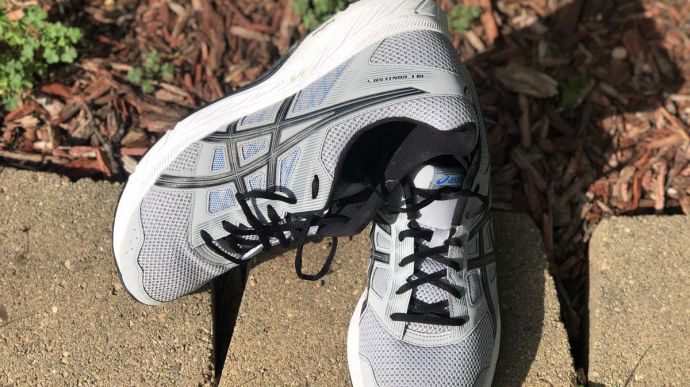 The ASICS Gel Contend 5 is a discount trainer, however it does not pack enough of a punch to warrant a purchase. This shoe does not log the long miles, and shows wear quickly.
WHERE TO BUY
LOWEST PRICE
$39
SHOE INFO
Asics
Brand
Gel Contend 5
Model
Cushioning
Type
10.25 oz. (291 gr.)
Weight
65 US$
MSRP
10 mm
Heel Drop
Gel Contend 4
Previous model
WHO IS IT FOR
This shoe is made for beginners and bargain seekers.
Help me choose

Every running brand wants to gain runner’s loyalty. However, the question is: how do you get a new runner to join your brand?

It’s hard to imagine a new adult runner (or parent with a child beginning to run) that is willing to throw down $120-150 for a pair of name-brand trainers to start in a new sport.

And in my experience — and talked to my running friends — most people did not start that way. Instead, these runners jump in at the ground floor with a company and see what the overall feel of the lowest level is like.

Due to this, there is a large market for introductory runners, and those who don’t want to spend the triple-digit figures, looking for affordable trainers.

Each company seems to have their option: Brooks has the Anthem, Adidas the Duramo, Nike the Revolution, Saucony the Cohesion and ASICS the Contend. Each of these shoes is easily under $100 and they each have a different feel.

I was able to try the Cohesion earlier in the season, and was impressed with the offering. I hoped the Contend would live up to those impressions as well.

When the ASICS Gel Contend 5 showed up, I was excited to see what they would look like and feel like. The look is understated, but at first glance you wouldn’t know the difference between these and a $100 pair of shoes.

The colorway I was sent was a gray on gray, and would look good in a business-casual look.

When I put them through the all-day test, they were actually quite comfortable, and I didn’t notice anything really different from other shoes.

And on my first run in them, a 4M with some strides, they were quite comfortable, if a bit stiff.

The ASICS Gel Contend 5 uses an AmpliFoam midsole to provide the majority of the cushion through the ride.

This foam, a few steps down from the FlyteFoam, and if you’ve tried ASICS’ highest level of foam, you’ll be able to tell. Although it is soft, the foam seems to break down after about 5-6 miles of pounding the pavement.

They have also included a Gel cushion under the heel. Which is great if you are a heel-strike runner.

However, this Gel cushion does not extend past the immediate heel and if you are not a heel-strike runner, it just ends up being extra weight with no benefit.

While one long runs, I consistently wished this Gel feature would extend further on the sole unit.

At the bottom of the sole unit is thick layer of solid rubber. This material is great for durability, because of the thickness of it. However, I noticed a lot of wear for only having traveled 60 miles on them.

The other part of this rubber is that it is not blown rubber, and thus is a much harder material.

This is noticeable during those longer miles as your impact does not have the softened landing that some of the more expensive versions do.

The upper on the Contend is actually pretty good, except for two negatives. The materials are not top-level, however they are adequate.

The mesh is breathable, and the flexes well throughout your run. The upper uses stitched on overlays to add support and protection.

The fit of the shoe is actually decent. The length is true-to-size, and the toebox is adequate in size. The heel of the shoe is normal, not loose nor tight.

However, the midfoot is tight, and the overlays are rigid, which does not help flex on the longer runs.

The seams on the upper are shallow and barely noticeable, which is nice. However, the extra material on the upper weighs it down, and can make it stiff. This is especially true on the midfoot.

The overlays became constraining while I did my long runs. As you log the miles, your feet will swell, and in this case, the overlays became incredibly uncomfortable as my feet began to swell on the longer miles.

The other thing I saw on a run with heat index temps in the triple-digits, the materials on the shoe absorb a lot of water, and do not expel it very quickly.

This resulted in the shoes weighing me down quite a bit while trying to finish my run.

Beyond that, one of the biggest complaints I have about the upper is the collar. The collar is still, and does not cushion the ankle or Achilles well.

Instead, the collar extension (used to help put the shoes on) is stiff and stabbed into my Achilles Tendon on every run.

This was not that noticeable during shorter runs, but as soon as I went past about 5 miles, I would notice increased irritation on my Achilles.

The ASICS Gel Contend 5 sits a great price point ($65), and could be an option for those getting into running.

However, I just don’t think this shoe hits the mark compared to the other entry models I’ve seen. The weight — especially on a sweaty day — and how quickly the cushion gave out on runs is concerning.

I know I am a larger runner than many. However, entry-level runners could be in the same make up as I am, and I do not think I would recommend this shoe to any of them. The shoe is fine for just walking around, or for standing.

However, I do not believe I’ll continue to wear these now that the review is over. They did not feel comfortable on runs longer than 5 miles, and the upper irritated my Achilles to the point of pain for the past couple of weeks.

There are cheap options out there, and some are sneaky good. The ASICS Gel Contend is not one of those.

We purchased a pair of Asics Gel Contend 5 from amazon using our own money. This did not influence the outcome of this review, written after running more than 50 miles in them.

Visit ShopAmazon.com
This page contains affiliate links. As an Amazon Associate I earn from qualifying purchases.
WHERE TO BUY
LOWEST PRICE
$39
AVAILABLE ON SALE:Previous model $70