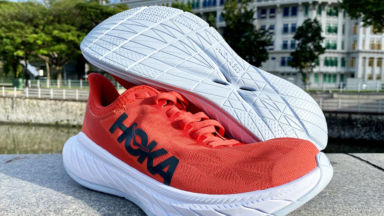 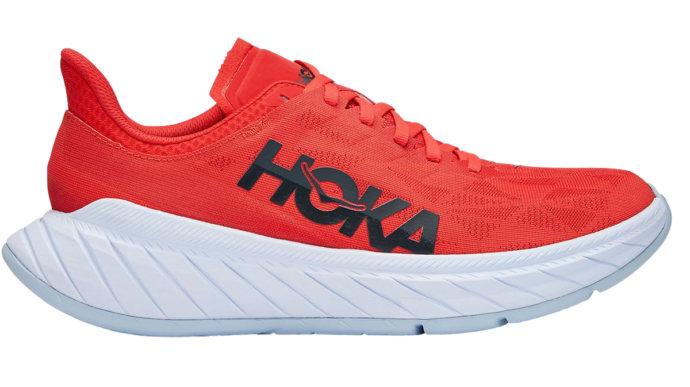 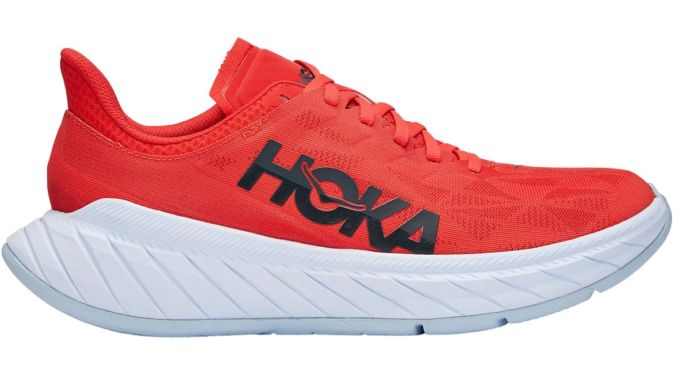 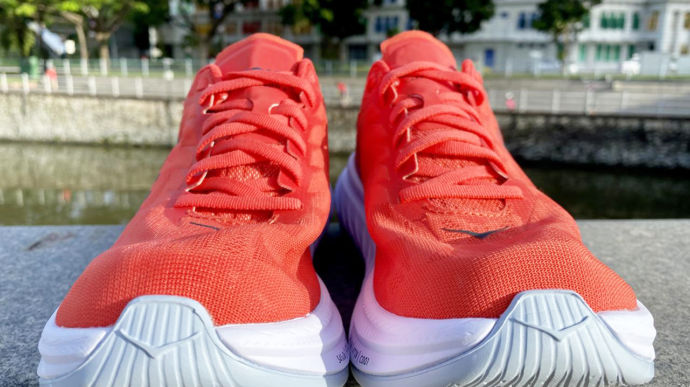 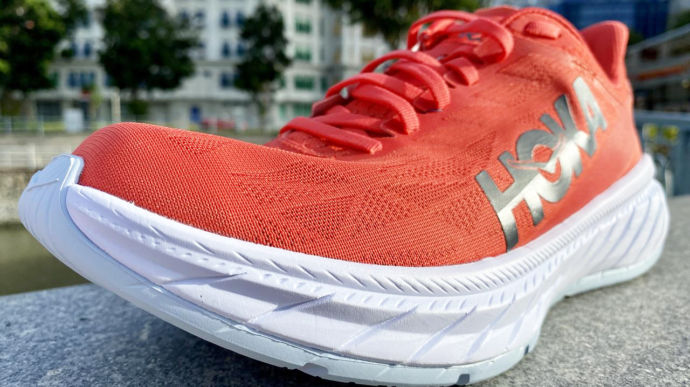 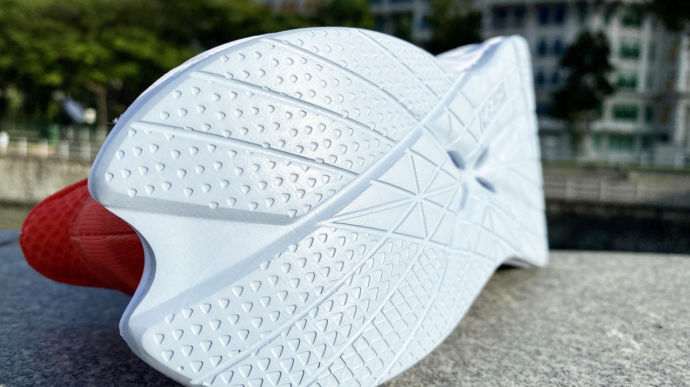 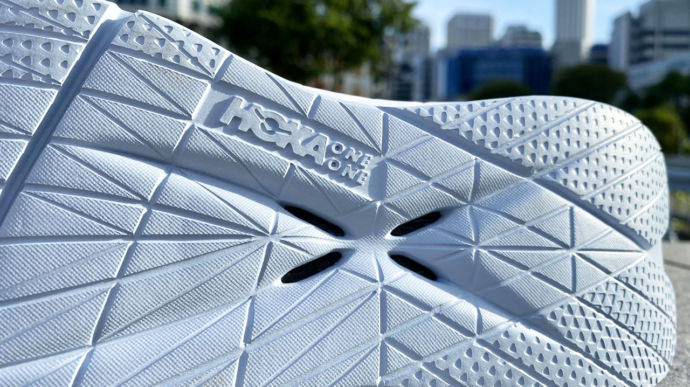 The Hoka Carbon X 2 is a high performance super shoe which specialises in ultramarathon distances. It has been updated with a more minimal upper and a softer midsole for better long-distance comfort.
WHERE TO BUY
LOWEST PRICE
$134
SHOE INFO
Hoka One One
Brand
Carbon X 2
Model
Racing
Type
8.4 oz. (238 gr.)
Weight
180 US$
MSRP
5 mm
Heel Drop
Carbon X
Previous model
WHO IS IT FOR
If you’re a runner looking for a carbon-plated racing shoe for marathon distances and beyond, the Carbon X 2 is the perfect choice because it offers stability and cushioning in spades.
Help me choose

Hoka One One Carbon X 2 Intro

“Go the distance. Go there fast.” That’s what’s printed on the sockliner of the Carbon X 2.

The Carbon X 2 is a unique super shoe in that it was designed with the ultra marathon distance in mind.

When the original Carbon X was launched in 2019, Jim Walmsley broke the 50 mile world record wearing a pair of Carbon X’s to show its credibility.

Since then, the Carbon X has become a very popular shoe not only for racing but for training as well. This stems from 4 main reasons:

The Carbon X-SPE came out earlier this year but it was only a minor update with just an upper change.

The Carbon X 2 on the other hand has been updated and redesigned with a brand new, softer midsole. It now has less rubberised EVA on the bottom with more compression-molded EVA on the top layer.

Hoka has another very similar super shoe with a carbon plate which you’ve probably seen on the feet of the elite Hoka marathon athletes, the Rocket X.

I was amazed by the excellent Hoka Rocket X which not only performed well but also came in at an affordable price. It could double up as a training shoe and had high levels of comfort and stability.

The Carbon X 2 is the first carbon fiber super shoe to be released in 2021. How high does it set the bar?

Hoka One One Carbon X 2 – Lateral Side

When I first saw images of the Carbon X 2 online, I immediately took a liking to its new design with the extended, exaggerated heel at the back reminding me of the Clifton Edge.

I thought that it looks a lot sleeker and more modern than the clunky silhouette of the outgoing Carbon X.

The elf heel trend of last year remains but the new addition to the Carbon X 2 is the “swallow tail” or “goat hoof” heel which we’ll begin to see on a lot of new releases next year.

Hoka One One Carbon X 2 – Closeup+Lateral

When I tried them on, I was glad that I decided to go a half size down. The length of the Carbon X 2 runs slightly long but the fit is on the narrow side.

When it comes to shoes with a rocker, I prefer my foot to sit further forward in the shoe so that I can engage the rocker more which is why I went down a half size.

My first run in the Carbon X 2 was an interval speed session where I did 1 km repeats at paces between 3 and 4 minutes per kilometre.

The shoe felt great during that workout session. The ride felt really smooth and efficient because of the carbon plate and the rocker working in tandem.

Something interesting that I noticed was that I could feel the midsole flex grooves through the thin insole. It didn’t affect the performance but if you like a smooth underfoot feel, the Carbon X 2 might not be your shoe.

The dual foam midsole of the Carbon X 2 is noticeably softer and more cushioned than the Carbon X. Not only is the compression molded EVA a lower density but the ratio of CMEVA to firmer rubberised EVA has been modified.

A downside of this change is that the Carbon X 2 is not as durable because there is less firm foam at the bottom which forms the outsole.

The upside is that the Carbon X 2 is more forgiving and has better long-distance comfort. My furthest run was 40 km and its performance on that run was outstanding.

I felt like it was a good balance between cushioning and responsiveness while my legs still felt fresh by the end of my run.

The carbon plate in the Carbon X 2 has been moved downwards and is situated between the two foams which also contributes to the softer ride.

The carbon plate has a little bit of flex to it but keeps the midsole rigid so that the rocker can work effectively.

When running in the Carbon X 2, I don’t feel any explosive propulsion like in the Adios Pro or the Alphafly Next% but the Carbon X 2 has more of a natural feel to it, similar to a training shoe.

This is why the Carbon X 2 is better suited to longer distances. During a long run, it’s smooth, efficient and energy-saving.

Stability in the Carbon X 2 is excellent thanks to its wide midsole base so it remains one of the most stable super shoes on the market.

Its midfoot and rearfoot are also wide enough to be suitable for non-elite runners who heel strike.

Soft, padded landings are what you can expect from the Carbon X 2 because its outsole is missing blown and carbon rubber which is great for when you want to sneak up behind runners to overtake them.

When it comes to outsole durability, as you’d expect, the rubber EVA wears down quickly.

I’ve run less than 100km in my pair and the 5mm thick outsole rubber has already worn down about 2mm on the outer heel posterior.

The worrying thing is that if the outsole rubber wears down completely, the bottom-loaded carbon plate will start to poke out from the bottom and scrape the ground.

I really like being able to see the carbon plate through the window slits in the middle of the outsole. They’ve been made thinner so that they don’t pick up small rocks anymore.

Traction has been acceptable considering there aren’t any protruding lugs on the outsole to bite into surfaces.

I didn’t slip on any wet surfaces but it wouldn’t be my first choice for running in the rain when the ground is soaked.

Hoka One One Carbon X 2 Upper

The Carbon X 2’s upper can be best described as minimal and in this case, less is more.

It’s made of a thin single-layer, breathable mesh and has a comfortable fit. It did run a half size large for me as I mentioned earlier on in the review.

The fit is also on the narrow side so it might not be suitable for wide-footed runners but there is plenty of toe box depth.

My favourite element of the upper is the large reflective patch on the tongue which is a tell tale sign that it was designed to be used for training even though it has a carbon plate.

The flat tongue is gusseted and I found that it slides significantly downward during runs. I had to undo the laces and pull up the tongue every 15km to eliminate the lacing pressure from the first two rows.

Hoka One One Carbon X 2 Conclusion

Hoka One One Carbon X 2 – Closeup

At only $180 for a full-length carbon plated super shoe, the Carbon X 2 seems like a bargain.

However, you have to take into consideration that it doesn’t have the high durability of the Rocket X (which also costs $180) because it doesn’t have any blown rubber on its outsole.

I really enjoy using the Carbon X 2 on long runs over 30 km because of its unobtrusive carbon plate and its energy saving rocker but I always feel like I have to save them for special occasions because I’m afraid the outsole rubber will wear down.

I think $180 is the right price for the Carbon X 2 because I wouldn’t be comfortable using it as a daily trainer so I’ll be saving them for races or the occasional long run.

If I had to choose between the Carbon X 2 and the Rocket X, I’d choose the Rocket X. The Rocket X is lighter and more durable so it can double up as a trainer and a racer.

Like the Rocket X, the Carbon X is also a great shoe for runners who want to transition to carbon fibre shoes. The ride of the Carbon X feels natural and it doesn’t force you to strike a certain way.

If I was choosing a super shoe for a marathon, there are plenty other super shoes that I would choose ahead of the Carbon X 2: shoes with better energy return and more propulsion.

If I was choosing a shoe for any distance beyond a marathon, the Carbon X 2 would be the first shoe I’d reach for.

I think the Carbon X 2 does exactly what Hoka designed it for. It’s for going the distance and going there fast. It’s stable, cushioned, and comfortable enough for ultra-distances.

I just wish it was more durable.

We purchased a pair of Hoka One One Carbon X 2 from runningwarehouse using our own money. This did not influence the outcome of this review, written after running more than 50 miles in them.

Visit ShopAmazon.com
This page contains affiliate links. As an Amazon Associate I earn from qualifying purchases.
WHERE TO BUY
LOWEST PRICE
$134
AVAILABLE ON SALE:Previous model $0

Similar shoes to Hoka One One Carbon X 2