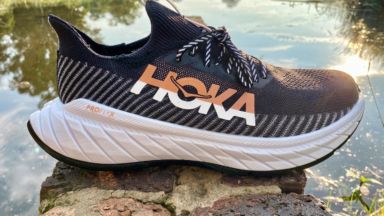 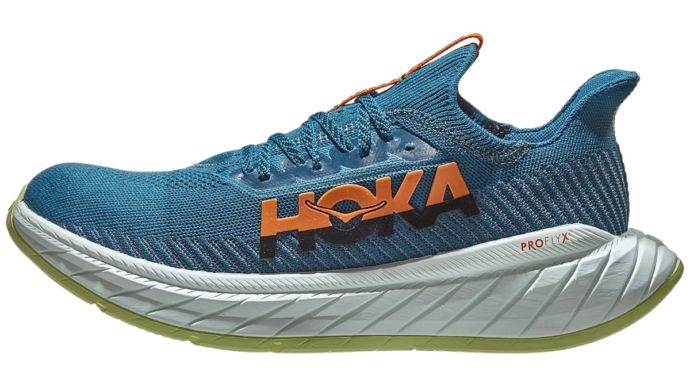 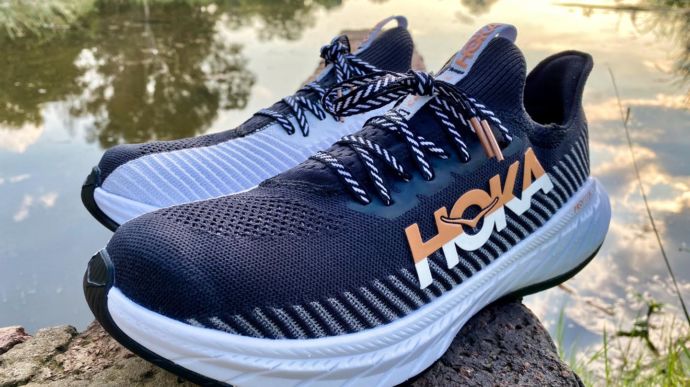 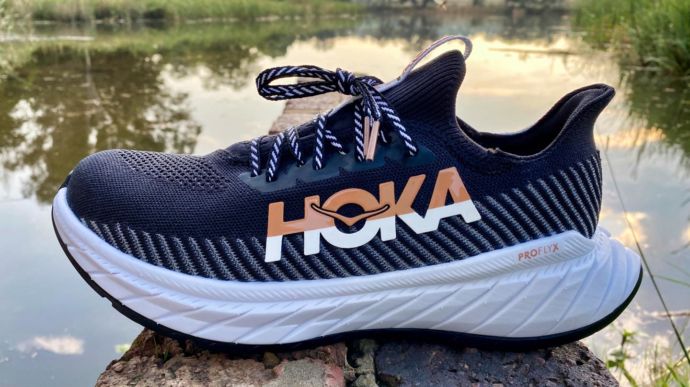 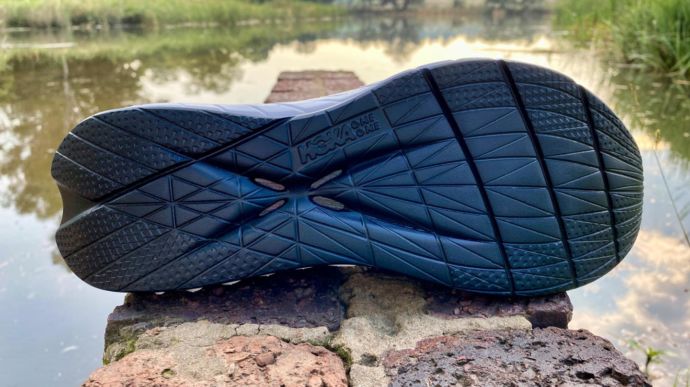 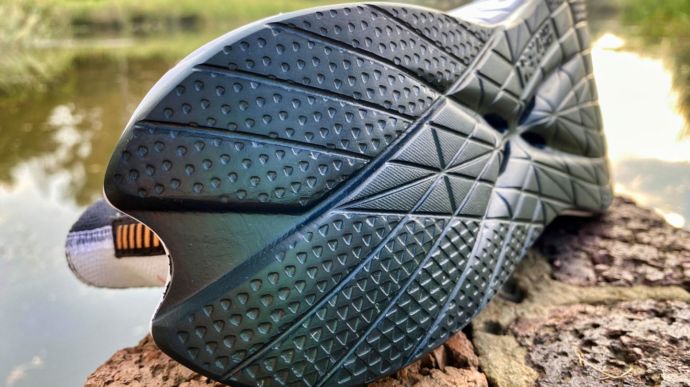 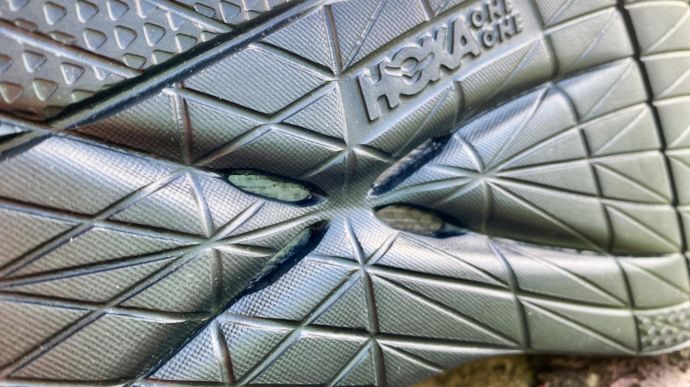 The Hoka Carbon X 3 is a wallet-friendly, stable and smooth-riding super shoe. It has a full-length carbon plate but it doesn’t have the explosive propulsion of some of the other super shoes. Version 3 has a new ProFly X midsole which is slightly softer and more cushioned than version 2. It also has a new knit upper which results in a more relaxed fit and a much lower level of foot lockdown.
WHERE TO BUY
LOWEST PRICE
$0
SHOE INFO
Hoka One One
Brand
Carbon x3
Model
Cushioning
Type
8.50 oz. (241 gr.)
Weight
180.00 US$
MSRP
32 mm
Heel
27 mm
Toe
5 mm
Heel Drop
Carbon X 2
Previous model
WHO IS IT FOR
If you’re looking for an entry level super shoe with a smooth, stable ride and you have wide feet, the Carbon X 3 is a good option for you. The Carbon X 3 is ideal for ultramarathons where you need the extra stability and cushioning.
Help me choose

A full-length carbon, plated racing shoe for $180 seems too good to be true. The Carbon X 3 might not be the first racing shoe choice for most long-distance runners but with the C X 3, Hoka manages to do what most other brands have failed to do: offer a full-length carbon fiber shoe at an affordable price.

Last year’s Carbon X 2 was a decent racing shoe but nothing to write home about. Most runners found that the Carbon X 2 was very narrow, didn’t return enough energy or offer enough propulsion to assist in races.

I really enjoyed the stability and natural ride of the Carbon X 2. I used it for mostly training workouts because it wasn’t the lightest of racers nor did it offer enough speed assistance during races. Hoka has changed up a few things with the Carbon X 3 to address these issues.

The biggest and most noticeable change is that the upper has been updated from a traditional mesh upper to a knitted upper, similar to the one that you’d see on a lifestyle trainer such as the Ultraboost 22.

The other big change is that the Carbon X 3’s midsole is now made of ProFly X which is a supercritical foam. Skechers, Brooks and New Balance already use supercritical foams in their trainers/racers but this year marks the first time we are seeing it from Hoka.

The new Carbon X 3 weighs 8.5 oz which is 0.1 oz heavier than the Carbon X 2. It still has the same midsole stack heights, 32mm/27mm and also costs the same as last year’s version.

I was surprised that they had changed the upper to a stretchy, knitted material. Knitted uppers aren’t usually associated with performance running shoes because the knit stretches and prevents the upper from providing a secure lockdown needed for high speeds.

My first run was a 10 km steady-paced run. Initially, my feet felt like they were slipping out of the shoes because I couldn’t get a secure lockdown. I had to really cinch the laces as tight as I could pull them. The ride felt very similar to the previous version but it felt slightly softer and more cushioned.

So how big a difference does the new supercritical foam in the midsole make? Not a big difference I’m afraid. ProFly X is nowhere near as bouncy or energetic as New Balance’s supercritical FuelCell midsole foam. I even find it a little less energetic than Skechers’ HyperBurst and Brooks’ DNA Flash.

If you look closely at FuelCell, HyperBurst and DNA Flash, you can see tiny bubbles that are baked into the foam which gives them a lighter, more airy feel but with Hoka’s ProFly X, you can’t see any bubbles and it feels denser, more similar to a regular EVA foam.

The midsole of the Carbon X 3 is the same geometry as the previous version and the same foam ratios as well, consisting of 80% ProFly X on the top layer and 20% rubberised EVA on the bottom layer.

I wouldn’t call the Carbon X 3 a soft shoe but it is very well cushioned. The ride can be best described as padded and smooth. Marathons or ultramarathons are what the Carbon X 3 was designed for and I think those are the distances that it’s best suited to.

I find that the C X 3 doesn’t urge me to run fast like some of the other super shoes. I have to put in a lot of effort to increase my speed which is why steady paces around 5 minutes per km are what I use the Carbon X 3 for, rather than speed workouts or racing.

The carbon plate in the Carbon X 3 is the same as in the last version. It’s flat so it doesn’t offer much mechanical assistance to go fast like the Vaporfly’s plate, but it does help with stability and keeping the forefoot stiff to promote energy-saving rockered transitions.

If you’ve tried a lot of super shoes, you’ve probably noticed that a common theme is that most of them are very unstable due to how thick their midsoles are and how they don’t flare at the base for a more stable platform.

What I like most about Carbon X 3 is that the ride is noticeably more stable than other super shoes due to its wide forefoot, midfoot and rearfoot. Cornering is a lot easier in the Carbon X 3 and I never feel like I’m going to roll an ankle in the Carbon X 3.

The Carbon X 3’s outsole doesn’t have any hard, blown rubber but it has a layer of soft, rubberised EVA. This helps the shoe to be lighter and have more ground feel. I also didn’t have any issues with grip in the Carbon X 3.

The downside of having a setup like this is that the rubberised EVA wears down faster than traditional outsoles so you have to reserve the Carbon X 3 for special occasions like races and key workouts. You can expect to see significant wear within the first 100 km of use.

Like all bootie constructions, it’s impossible to do a runner’s knot so you don’t get that extra precision lockdown. There’s a reason that brands don’t make racing shoes with knitted uppers; knit stretches. When the upper stretches too much, you get a lot of foot movement because your foot isn’t held securely in place- this is the case with the Carbon X 3.

Heel lockdown is a problem but I figured out a trick to get better lockdown. When tying the laces, I use the pull loop at the end of the tongue as an extra row of eyelets and I thread the laces through the pull tab, then tie. Even though using this method gets a higher level of heel lockdown, I still experienced heel lift.

The Carbon X 3 has a roomy fit which isn’t suited to narrow footed runners. I have narrow feet and I found that there was a lot of excess material around the lacing area so I would recommend going a half size down to get a more dialled-in fit, if you don’t have wide feet.

At $180, Carbon X 3 still represents excellent value for money. It’s smooth, stable and very well cushioned but it does come with some sacrifices that you need to know about.

The Carbon X 3 doesn’t give you that explosive toe-off that you get from the A-tier carbon fibre racers (Alphafly, Vaporfly, Adios Pro, Metaspeed Sky). Its plate is too flat and its toe spring is not high enough so you don’t get as much of an advantage using the Carbon X in races.

I’ll still use the Carbon X 3 in my rotation but for steady long runs. . At 8.5 oz, it’s heavy for a racing shoe but it’s a great weight for a long run shoe. It also feels efficient and saves you energy over the duration of a long run.

The midsole of the Carbon X 3 is an upgrade over last year’s version because it’s slightly softer and more cushioned, however the new knit upper is a big disappointment. It gives the Carbon X 3 a sloppy, relaxed fit with heel lift which is not ideal for racing. I’d choose the Carbon X 2 over the X 3 because it feels much more performance-oriented, and it’s lighter.

As editorial policy, we do not accept free samples from companies.
We purchased this pair of Hoka Carbon X 3 at Running Warehouse with our own money.

Visit ShopRunningWarehouse.Com
This page contains affiliate links. As an Amazon Associate I earn from qualifying purchases.
WHERE TO BUY
LOWEST PRICE
$0
AVAILABLE ON SALE:Previous model $143

Similar shoes to Hoka One One Carbon x3