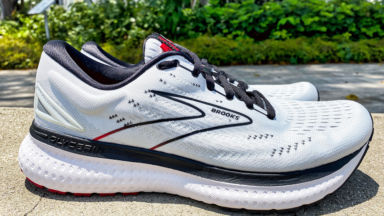 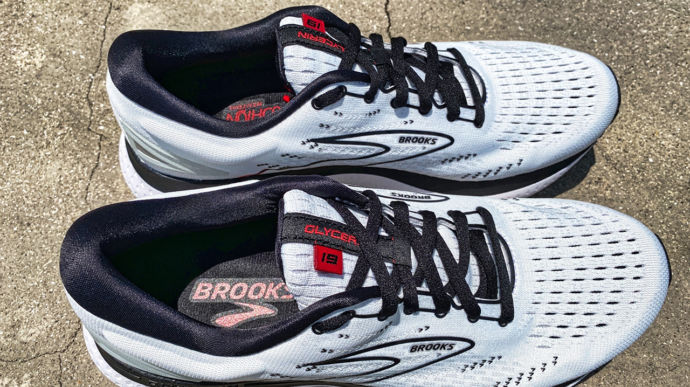 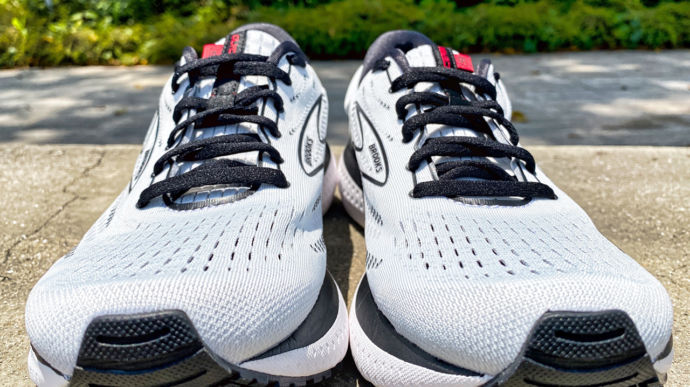 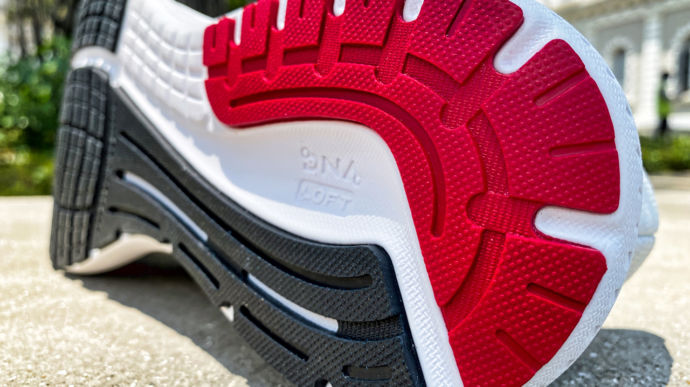 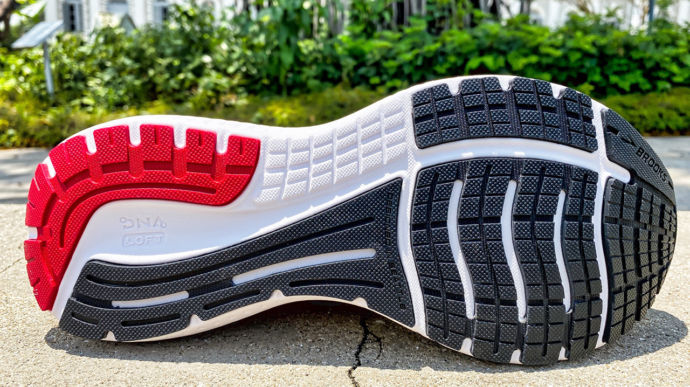 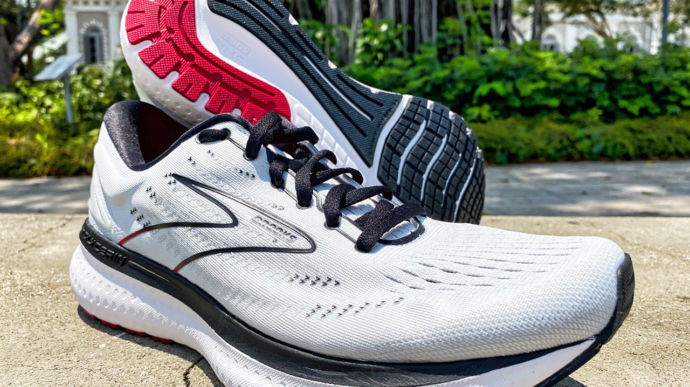 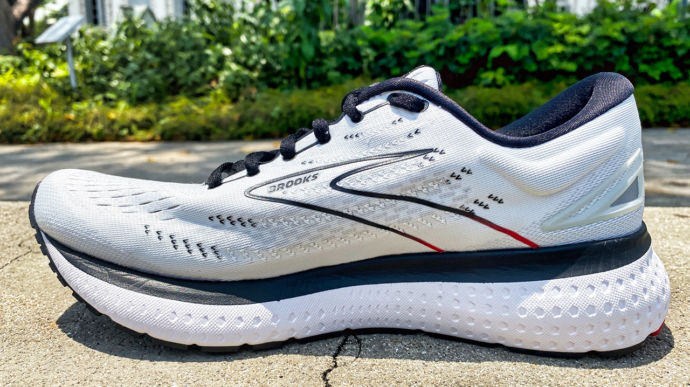 The Brooks Glycerin 19 is a medium-soft, max-cushioned trainer with a superb, comfortable, plush upper that’s best suited to easy-paced runs.

Version 19 has been updated with a slightly softer ride and a new outsole configuration which results in smoother ride transitions but it still has that signature, polished Glycerin feel.
WHERE TO BUY
LOWEST PRICE
$79
SHOE INFO
Brooks
Brand
Glycerin 19
Model
Cushioning
Type
10.2 oz. (289 gr.)
Weight
150 US$
MSRP
9 mm
Heel Drop
Brooks Glycerin
Family
Glycerin 18
Previous model
WHO IS IT FOR
If you’re a runner who likes a max-cushioned trainer that isn’t overly soft and very stable, the Glycerin 19 is the shoe for you. The Glycerin 19’s strength is its magnificent upper which is a design masterpiece.
Help me choose

When it comes to sticking to what works, there’s no brand that does it more than Brooks and in terms of consistency from update to update, Brooks is unmatched.

Of all the max-cushioned trainers, the Glycerin is the shoe that receives the most minimal of updates, every year.

The Glycerin has been using the same DNA Loft midsole foam for the past 4 versions with very subtle changes in midsole foam density in each version.

Version 19 of the Glycerin also uses DNA Loft but it has a softer density than version 18. It still has the same stack heights and remains the same price. The weight is also exactly the same as the previous version.

I’ve never ever thought of the Glycerin as a super soft ride. It’s always been one of the firmest max-cushioned trainers.

The latest versions of the Nimbus, Triumph, and Clifton are all softer shoes than the Glycerin 18. Now, with the release of the Invincible, it’s hard to imagine that any shoe could be softer.

There’s nothing wrong with being a firm, max-cushioned shoe. Some runners prefer firmer shoes because they are more stable and more responsive but the problem is that the advertising for the Glycerin is misleading.

On Brooks’ website, they market the Glycerin 19 as “your softest run ever” and their marketing pitch is: “Super-soft cushion lets you run for miles without ever thinking about your feet.”

In the Brooks “Cushion” category, the Glycerin is the big brother to the insanely popular Ghost.

So is the Glycerin 19 worth the extra $20 over the Ghost 13 and is the 19th version of the Glycerin an improvement over version 18?

The Glycerin 18 has some extra diagonal midsole lines that the 19 doesn’t have but other than that, it would be very difficult to tell them apart on the road.

I don’t usually wear white running shoes but this white and black pair with hints of red really pop when you’re running.

When I put the Glycerin 19 on for the first time, my feet were greeted with a plush, slipper-like fit. There was plenty of step-in comfort thanks to the thick Ortholite sock liner.

The fit was perfect and it was one of the most comfortable uppers I have tried on all year.

On my first run, the shoe didn’t feel special or ground-breaking but it did feel very natural and cushioned with a signature Glycerin ride.

What stood out the most for me was how much smoother the ride felt than the Ghost 13 and any previous Glycerin.

The best word to describe how the Glycerin’s midsole feels is “padded”. It has nowhere near the level of squish as a Nimbus 23 or a Clifton 7 but it’s soft enough to absorb ground impact and make the ride comfortable.

Easy paces are what the Glycerin 19 was designed for and what it feels best doing. Steady paces faster than 5.30 per kilometre are doable but you’ll have to work a bit harder because of the weight of the shoe and the lack of decent responsiveness.

DNA Loft is traditional EVA and not the carbonated kind that’s found in the Hyperion Tempo so you can expect only a very small amount of responsiveness in the Glycerin 19.

If you’re looking for a super soft, super-bouncy ride similar to the ZoomX Invincible, you won’t find it in the Glycerin 19.

The Glycerin 19 rides smooth, really smooth. It’s one of the smoothest-riding, max-cushioned trainers on the market due to its single density midsole and its outsole configuration.

The downside is that the rubber wears down faster than the norm. On my pair, on the outer lateral heel area, the rubber has already worn down 2-3mm so I expect to reach midsole foam by the time I hit 300 kilometres which is not ideal.

This was my same experience with the Ghost 13.

The biggest difference between the outsoles of the Glycerin 19 and the 18 is that the 19 has one long price of rubber on the medial side that extends from the rearfoot, all the way to the end of the midfoot just before where the forefoot starts.

This long piece of rubber makes ride transitions smoother and also increases midfoot stability and structure because there is less flex in the midfoot.

On the lateral side of the midfoot, there is a patch that doesn’t have any rubber coverage in order to save weight. The size of the patch has increased compared to the Glycerin 18 which results in more ground feel but less durability.

I found that outsole grip and traction in the Glycerin 19 were outstanding. The softer density of the rubber makes it tackier than really hard, durable rubber.

Brooks never holds back when it comes to the upper of the Glycerin. After all, it’s supposed to be their plushest and most premium training shoe.

It’s made from multi-layer mesh and has very few 3D Fit Print overlays on the midfoot that don’t irritate the foot.

The upper of the Glycerin 19 feels so good that it was as if it was designed specifically for my feet. It fits true to size and the plush layers of mesh mold to your feet.

The heel collar is very plush and generously padded. The heel counter is very stout and keeps my heel locked in. The entire inner lining of the shoe is smooth, seamless and very soft to the touch.

There are two, small reflective triangle windows on the heel for low-light visibility from the rear.

The main feature of the upper is the fully gusseted tongue which Glycerins always have and that not even the Ghost 13 has.

The only problem with having a fully gusseted tongue is that the inner sleeve is like an extra layer of material inside the shoe so it makes the shoe feel warmer.

When running in the Glycerin 19 in over 28 degree Celsius weather, in the heat of the sun, my feet were sweating profusely.

The best part of the upper is the foot lockdown. Foot lockdown is so good and secure that I don’t even have to do heel lock lacing.

I can confidently say that the Glycerin 19 is an improvement over the 18. The softer midsole is a move in the right direction and the ride transitions are smoother. These changes also don’t come at an increase in weight which is a bonus.

The Glycerin 19 is worth the extra $20 over the Ghost 13 if you prefer a softer, smoother ride. There is no tongue slide in the Glycerin because of the sleeved tongue and the overall comfort is better.

The Ghost however is the more versatile shoe because it can handle faster efforts better.

You won’t experience “your softest run ever” in the Glycerin 19 like Brooks advertises. Compared to the other max-cushioned trainers, the Glycerin 19’s ride is a tad firmer but it is more stable because there is less lean bias.

Outsole durability is also below average so it’s not a durable workhorse that can do over 1000 kilometres.

The one area where the Glycerin 19 beats all other max-cushioned trainers is its magnificent upper which is an engineering masterpiece.

We purchased a pair of Brooks Glycerin 19 from runningwarehouse using our own money. This did not influence the outcome of this review, written after running more than 50 miles in them.

Visit ShopAmazon.com
This page contains affiliate links. As an Amazon Associate I earn from qualifying purchases.
WHERE TO BUY
LOWEST PRICE
$79
AVAILABLE ON SALE:Previous model $75