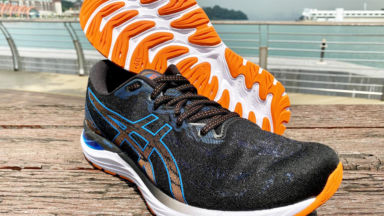 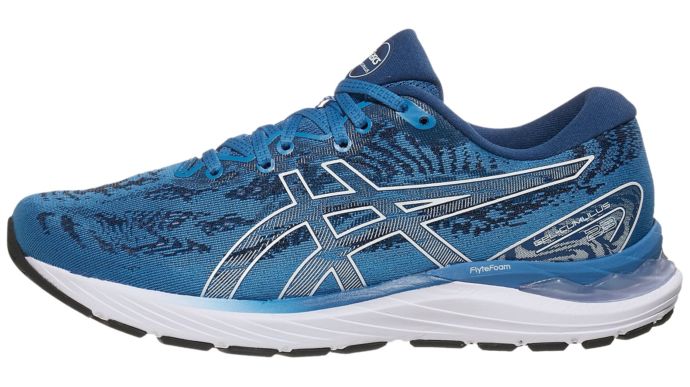 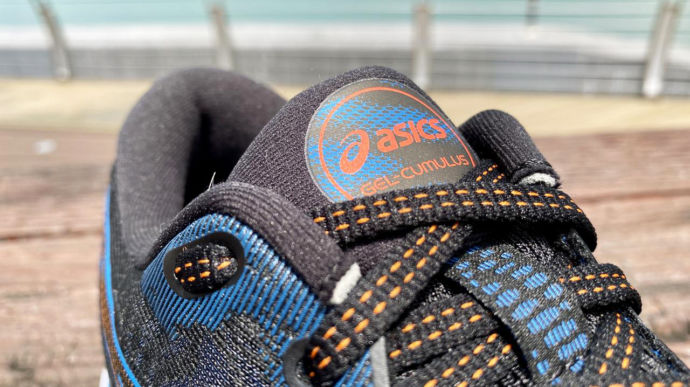 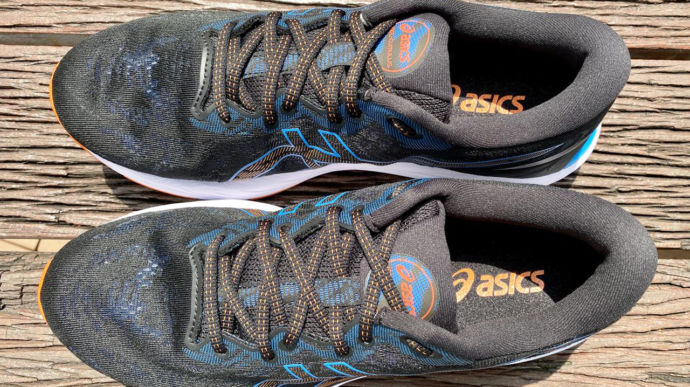 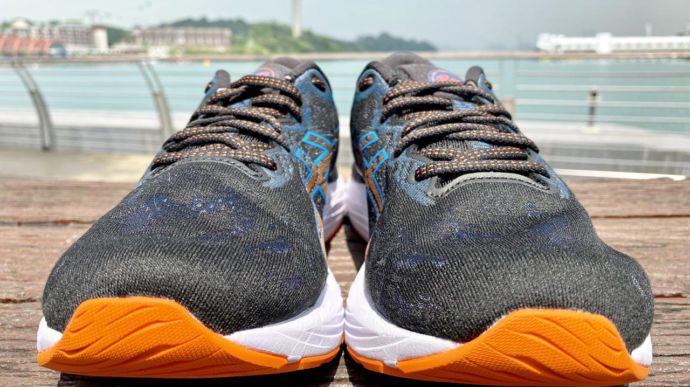 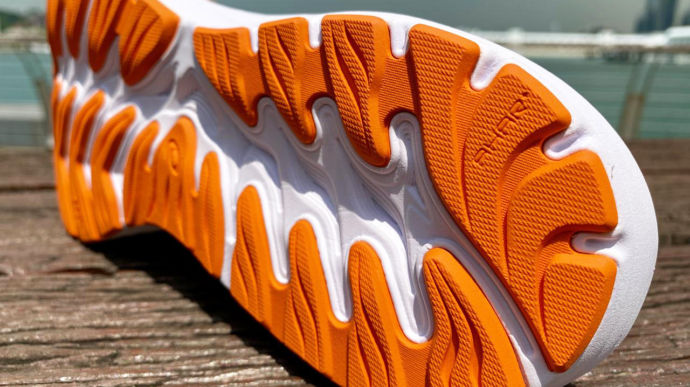 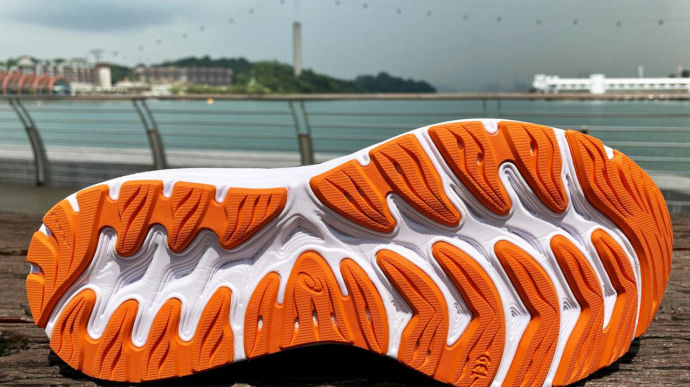 The ASICS Gel Cumulus 23 continues the Cumulus tradition of being a versatile, neutral daily trainer that you can rely on for hundreds of kilometres.

Version 23 has been updated with a softer mesh and 3D Space Construction zones in the midsole which results in a softer ride.
WHERE TO BUY
LOWEST PRICE
$58
SHOE INFO
Asics
Brand
Gel Cumulus 23
Model
Cushioning
Type
9.9 oz. (281 gr.)
Weight
120 US$
MSRP
10 mm
Heel Drop
Asics Gel Cumulus
Family
Gel Cumulus 22
Previous model
WHO IS IT FOR
If you're a runner looking for only one shoe in your rotation that can handle every type of run, the Cumulus 23 is your shoe.

The Cumulus 23 has a wallet-friendly price and has no major flaws.
Help me choose

If you were to Google image search “daily training running shoe”, the odds are high that the Asics Cumulus would be one of the first images that pop up.

That’s because the Cumulus is the textbook definition of a comfortable, daily trainer with a versatile ride character. It’s a multipurpose, do-everything shoe which is why it’s been such a crowd pleaser for over two decades.

Recently, ASICS has been pushing the boundaries of innovation and has launched some very exciting shoes.

The problem with exciting shoes is that they’re still new so you never know what you are going to get and if it’s going to work for you.

On the flip side of the coin, you get Asics’ “plain” shoes, their bread and butter trainers that are consistent, dependable and give you what you expect.

Of the three ASICS stalwarts, the Kayano, Nimbus and Cumulus, the Cumulus is the most budget friendly, the lightest and the most versatile.

Compared to other mid-priced, neutral daily trainers from other brands, the Cumulus receives the most updates annually which keeps things exciting and fresh.

While the Nike Pegasus, New Balance 880, Saucony Ride and Hoka Clifton receive upper-only updates every other year, you can expect the Cumulus to get a brand new upper, midsole and outsole every year.

It now has a softer upper, 3D Space Construction zones in the midsole and a full-length, bottom layer of Flytefoam.

When I first saw pictures of the Cumulus 23 online, my initial thought was that it looks very similar to the Nimbus 23.

When I held it in hand, the upper mesh felt noticeably better than the previous version: softer and more premium.

Walking around in the Cumulus 23, I could feel that the layer directly underfoot was less spongy than the Nimbus 23 with less of a sink-in sensation.

My first run was a 10km steady-paced run and I was surprised how well it performed when I increased the pace.

Even at tempo speeds of 4.25 minutes per kilometer, the Cumulus 23 didn’t feel like it was out of its comfort zone.

I did notice that I could feel the edges of the outsole lugs through the forefoot and it felt slightly lumpy. This is because of a big difference in density between the midsole foam and the outsole rubber.

After that first impressive 10 kilometer run, I was excited to test the Cumulus 23 on a variety of different runs and paces.

Flytefoam has come a long way. What used to be a really firm, unforgiving foam only suited for fast runs, has now become softer, more lively and more versatile.

The bottom layer of Flytefoam is now a continuous, single-density piece of foam, so ride transitions are smoother. The firmer wedge of Flytefoam has been moved closer to the foot, above the gel pocket.

The Cumulus is supposed to deliver a soft ride- and it does. After all, it is named after a cloud.

The Cumulus 23 is softer than the Ghost 13, Ride 14 and Pegasus 38 but not as soft as the Clifton 7 so it doesn’t feel like you’re sinking down with every foot strike.

The high versatility of the Cumulus 23 means that it can handle easy runs, recovery runs, steady runs and it even has enough cushioning for long distances of 40+ kilometres.

When I tested the Nimbus 23, I felt foot fatigue on longer runs because of how soft and spongy its forefoot is but the Cumulus 23 has just the right amount of cushioning to feel efficient on long runs.

The Cumulus 23 now has 3D Space Construction which are these small hexagonal shapes that look like honeycomb which are etched onto the top layer of the midsole.

These hexagonal shapes in the midsole act like pillars to allow the midsole to compress more in those zones which increases softness.

The Cumulus has always been known as a stable neutral trainer and the Cumulus 23 is no exception. Its midsole is not overly soft so there isn’t much lean bias and foot strikes feel very planted.

The flex grooves on the outsole of the Cumulus 23 have been made wider and deeper than the previous version so flexibility in the forefoot has been increased which is a welcome change.

There are two types of rubber used on the outsole of the Cumulus 23: AHAR+ on the heel and AHAR on the forefoot.

The density of the rubber on the Cumulus 23 is higher than that of the Nimbus 23 which leads to firmer landings but increased durability.

I tested the traction during a long run where it poured heavily for 3 hours straight and traction was still fantastic. I never once slipped or felt like I was going to slip.

The upper of the Cumulus 23 is very well-designed with enough padding in all the right places to make it comfortable and effective.

The thick tongue is not gusseted like on the Nimbus 23 but it still stays in place during runs and I experienced no tongue slide.

The collar and heel tab are also generously padded and provide great foot lockdown without even having to do heel lock lacing.

The one downside of the upper is that all the padding absorbs a lot of moisture. When I ran in the rain, both shoes picked up a ton of weight and I felt like I was carrying an extra 1 kilogram of water weight on my feet.

There is also a thin, reflective strip on the heel for nighttime visibility from the rear which is a bonus.

The fit of the Cumulus 23 is true to size and there is plenty of room in the midfoot and forefoot. It should be accommodating enough for most runners without having to get the wide version.

In a world where daily trainers have carbon plates and super foam midsoles, the dependable ASICS Cumulus 23 still doesn’t feel like a boring shoe.

It also doesn’t feel like an exciting shoe. It does however feel well-rounded, well-built, reliable and luxurious.

You don’t have to worry about durability or fit issues with the Cumulus 23, or about getting injured from too much softness or not enough. The Cumulus 23 has the right amount of everything.

The small updates that ASICS has made to the Cumulus 23 have improved it but have made it heavier too, although on foot, it doesn’t feel like a heavy shoe.

I enjoyed the Cumulus 23 most on middle distance runs at easy or steady paces but if I only had one running shoe and it was the Cumulus 23, I’d be very happy with it because it can also handle a variety of different distances and paces.

The Cumulus 23 may not be as luxurious or as plush as the Nimbus 23 but it’s more versatile, more durable and better value for money.

If you’re an ASICS Cumulus loyalist and you buy it every year, you’ll love the Cumulus 23.

We purchased a pair of Asics Gel Cumulus 23 from runningwarehouse using our own money. This did not influence the outcome of this review, written after running more than 50 miles in them.

Visit ShopAmazon.com
This page contains affiliate links. As an Amazon Associate I earn from qualifying purchases.
WHERE TO BUY
LOWEST PRICE
$58
AVAILABLE ON SALE:Previous model $59