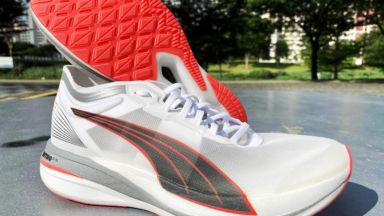 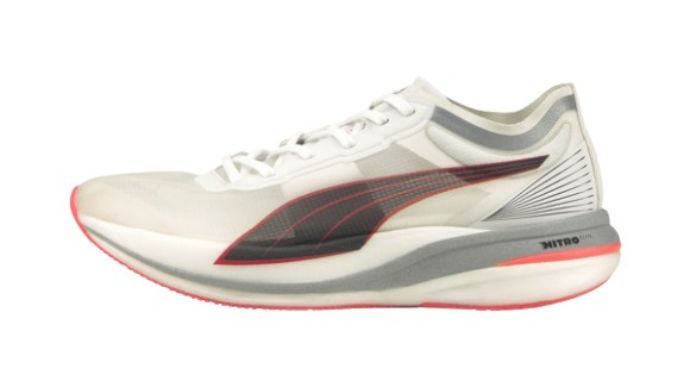 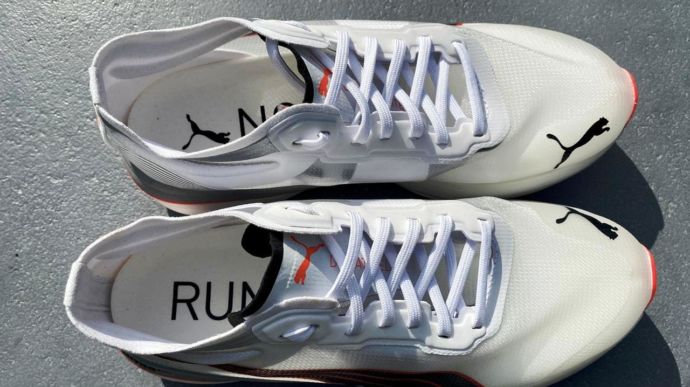 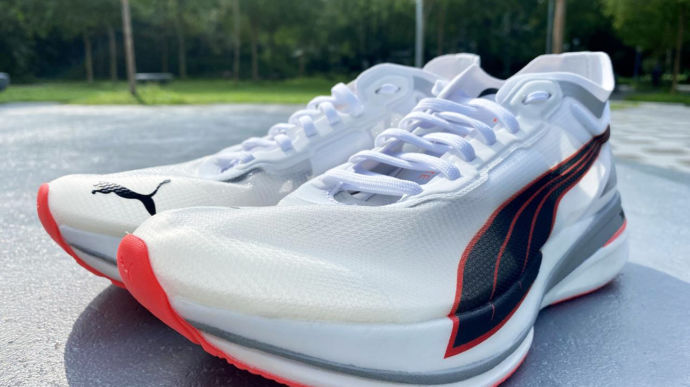 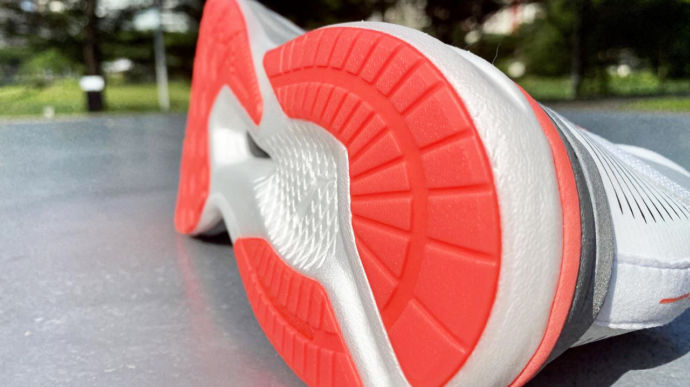 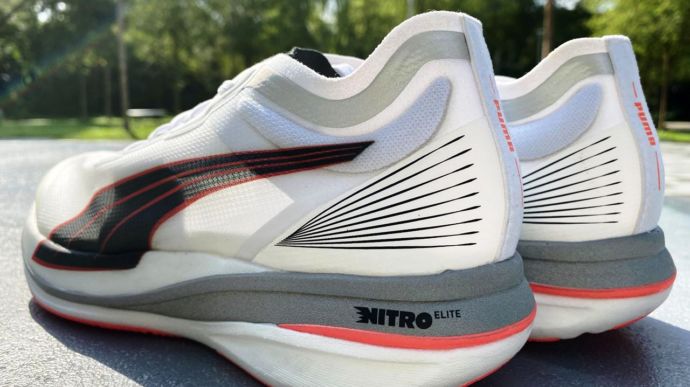 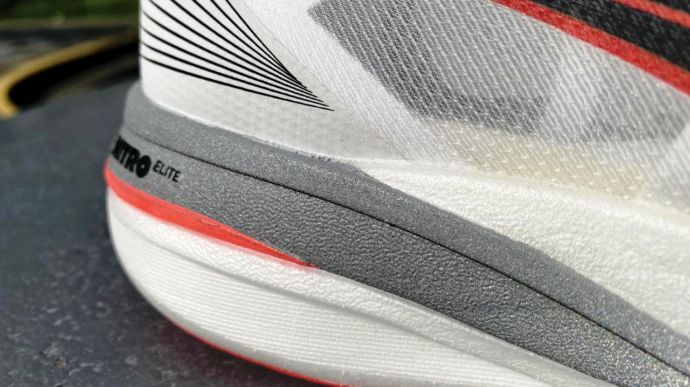 The Puma Deviate Nitro Elite is a versatile racing shoe with a stable ride, soft cushioning and a breezy upper.

It lacks the propulsion to make it a true competitor in the carbon fibre shoe war but it has a featherlight weight, a durable outsole and a wallet-friendly price which makes it perfect for training.
WHERE TO BUY
LOWEST PRICE
$187
SHOE INFO
Puma
Brand
Deviate Nitro Elite
Model
Racing
Type
6.8 oz. (193 gr.)
Weight
200 US$
MSRP
8 mm
Heel Drop
WHO IS IT FOR
If you're a runner who wants a light racing shoe with a similar ride to the Deviate Nitro, the Deviate Nitro Elite is the perfect shoe.

The Deviate Nitro Elite has a much lighter weight, a more minimal upper and a slightly softer ride.
Help me choose

If you had told me 1 year ago that Puma would have a carbon fibre super shoe capable of competing with the fastest marathon super shoes on the market, I would never have believed you.

Puma has been the surprise brand of 2021, launching a complete range of 5 innovative running shoes built on their new Nitro Foam which are all competitively priced.

So just how good is Puma’s most expensive, most innovative, fastest running shoe ever and is it worth paying the extra $40 over the Deviate Nitro?

The first time I saw the Deviate Nitro Elite was on the feet of Molly Seidel and I knew then that I had to test this exciting shoe that made Molly sign with the German brand.

There is a big marketing push for the new Puma Nitro collection but surprisingly, the Deviate Nitro Elite is not available in Singapore so I had to order it from the UK.

From looking at pictures online of people wearing it, I had a hunch that they ran big so I ordered a half size down from my normal size.

When it arrived and I tried it on, I was relieved to find out that my hunch was correct and the fit was perfect. There was exactly one thumb width in the front of my big toes.

My first run in the Deviate Nitro Elite was a 41 kilometre Saturday run and it felt great right out of the box with no break-in period needed.

What I noticed first was how much better the upper felt than the upper of the Deviate Nitro: thinner, more breathable, lighter and no heel tab from hell that cuts into your Achilles if you tie it too tight.

I didn’t experience a lot of propulsion during that run from the carbon plate but the ride felt smooth, stable and cushioned.

It rained for the last 10 kilometres and the upper did well to not soak up a lot of liquid. The outsole also had amazing traction on the wet pavement and roads.

Nitro Elite Foam is a very impressive super foam and there is a lot to like about it.

It’s plusher and more forgiving than Saucony’s PEBA foam, PWRRUN PB while it also has more compression than Nike’s ZoomX (in the Vaporfly) and the Metaspeed Sky’s Flytefoam Blast Turbo so it’s a lot softer and more comfortable over long distances.

The only super shoe I’ve tested that’s softer and more cushioned than the Deviate Nitro Elite is the RC Elite V2 with its supercritical FuelCell midsole.

The midsole of the Deviate Nitro Elite has a stack height of 36 mm in the heel, 28 mm in the forefoot which is relatively low compared to the Vaporfly Next% 2, the Adios Pro and the RC Elite V2 which are 39/40 mm in the heel.

I feel that Puma left a bit on the table when designing the midsole and they could have increased the stack height by at least 3 mm in the heel and forefoot.

A midsole with an increase in stack height could have housed a more aggressive carbon plate with a steeper slope which would have resulted in more propulsion.

I can feel the stiff plate but I wish it had a bigger curve and a more prominent feel in the forefoot. The ride feels a bit flat, especially without a high toe-spring.

I enjoy running in the Deviate Nitro Elite but it doesn’t feel like a super shoe powerhouse like some of the other carbon fibre shoes I’ve tested this year.

The Deviate Nitro feels firmer but more cushioned whereas the Deviate Nitro Elite feels softer and lower to the ground because its midsole compresses so much when it’s loaded.

Switching between the two feels seamless and it makes a lot of sense because the Deviate Nitro is a lot sturdier and more durable but with a similar ride.

The Deviate Nitro Elite has a very versatile ride and can handle all types of runs including slower, more relaxed runs over 5.30 per kilometre because of how soft its PEBA midsole is.

On the opposite side of the spectrum, it can also handle interval workouts below 4 minutes per kilometre with ease because of how responsive the plate and the midsole foam are.

No PUMAGRIP, no problem. The Deviate Nitro Elite has one of the best gripping and most durable outsoles of any super shoe.

There’s plenty of thick PUMAGRIP LT rubber which is slightly less durable than the excellent PUMAGRIP that you find on the other Nitro trainers in the series but it’s still relatively abrasion resistant compared to the competition.

The entire forefoot is covered in thick rubber as well as most of the rearfoot so the rubber bears the brunt on all the heavy strike zones.

I’ve put 100 kilometres on my pair and outsole durability has been excellent. What I’ve been really impressed with is how abrasion resistant the Nitro Elite foam is.

Even the exposed midsole foam in the midfoot area hasn’t been chewed up by the ground like other soft supercritical foams such as Hyperburst and FuelCell.

In the centre of the heel is a shallow cavity which allows the foam to compress downwards and increases cushioning under your heel.

Like the Deviate Nitro, there’s also a window cutout under the midfoot which saves weight and allows you to see and touch the carbon plate which is a design aesthetic that I really like.

I found ride transitions in the Deviate Nitro Elite very smooth because of its full ground contact outsole and I also found stability to be above average compared to other super shoes because of how much lower your foot sits to the ground.

The upper of the Deviate Nitro Elite is made from the most transparent material I’ve ever seen on a running shoe and it’s also one of the most breathable.

It’s so transparent that you can clearly see your socks through the toe box so you need to make good sock choices when running in the Deviate Nitro Elite.

This material reminds me a lot of the plastic-like Vaporweave on the Vaporfly Next% but with a rough, matte texture. This mesh also repels water very well.

There are internal midfoot support straps which surround your feet on the lateral and medial sides but these straps aren’t connected to the tongue.

The tongue is flat and wide but it still slides around a lot and during runs, it slides down so far that I have to unite the laces to pull it back up.

The inside of the collar has a little bit of padding while the topline is very thin and flimsy. I found foot lockdown superb and the heel tab caused me no issues, even when using a runner’s knot.

You get a lot of reflectivity on the Deviate Nitro Elite- much more than other racing shoes. The entire eyestay is reflective as well as the silver strips on the collar.

The fit of the upper, which is a half size down from my normal size is a snug, racing fit however if you go true to size, the fit will be more accommodating and relaxed.

Overall, the upper of the Deviate Nitro Elite is very breathable, light and effective. The only thing I’d change is to add a semi-gusseted tongue to prevent the tongue slide and improve the fit.

The Puma Deviate Nitro Elite is not what the kids these days call a “game changer”. It doesn’t feel special in any way and it doesn’t do any one thing better than any other super shoe.

It does however tick a lot of boxes: it’s durable, it’s stable, it packs enough soft cushioning for a full marathon and it has no major flaws.

The Deviate Nitro Elite’s biggest draw is its insanely low weight. At 6.8 oz, it’s bettered by only the Vaporfly Next% 2. It’s a lot more durable than the Vaporfly though and costs $50 less.

It’s also cheaper than the Alphafly Next%, the Metaspeed Sky/Edge, the Hyperion Elite 2 and the RC Elite v2 so it represents excellent value for a carbon fibre racer.

Hopefully Puma can change this with the Deviate Nitro Elite 2 by increasing the stack height, making the plate more aggressive and increasing the toe-spring.

We purchased a pair of Puma Deviate Nitro Elite from runningwarehouse using our own money. This did not influence the outcome of this review, written after running more than 50 miles in them.

Visit ShopAmazon.com
Sorry - Product not found. Please try RunningWarehouse.Com to check in their assortment.
This page contains affiliate links. As an Amazon Associate I earn from qualifying purchases.
WHERE TO BUY
LOWEST PRICE
$187