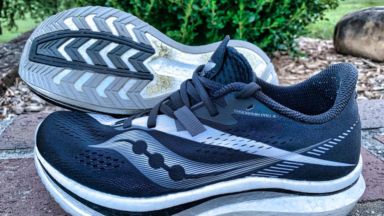 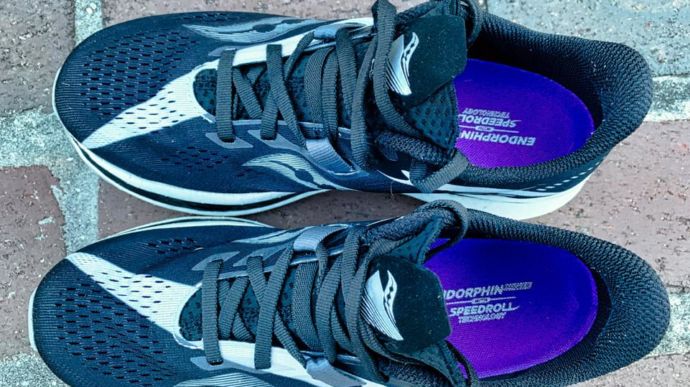 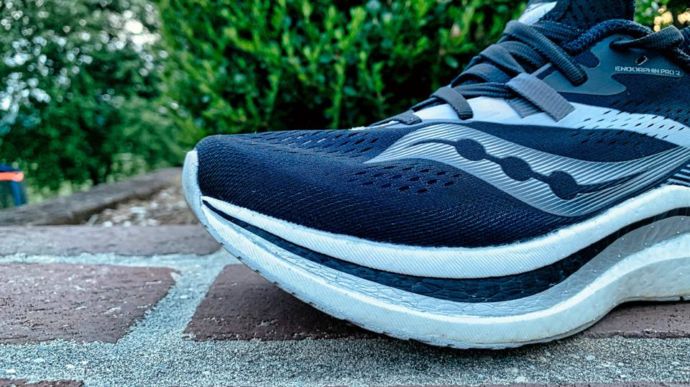 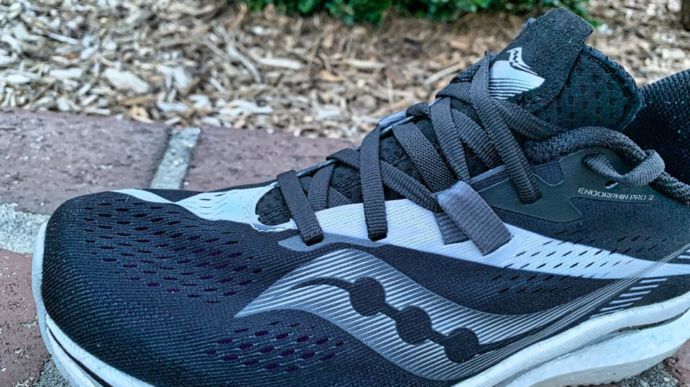 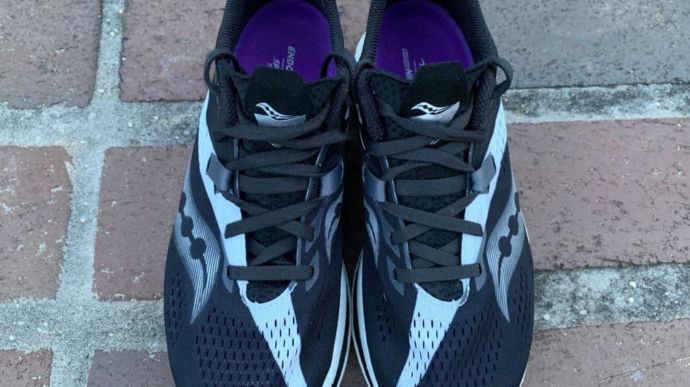 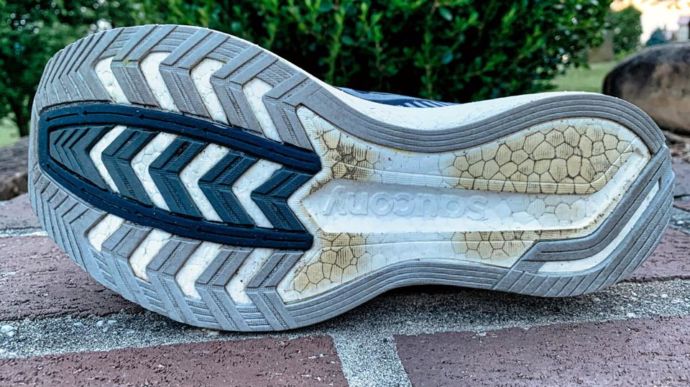 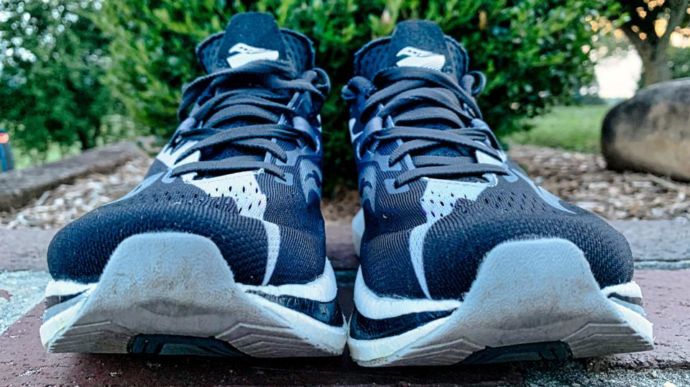 The Saucony Endorphin Pro 2 is a powerhouse of a shoe. It was definitely built for race day but performs well at various other speeds. This shoe has become one of my favorites and comes highly recommended.
WHERE TO BUY
LOWEST PRICE
$161
SHOE INFO
Saucony
Brand
Endorphin Pro 2
Model
Racing
Type
7.50 oz. (213 gr.)
Weight
200.00 US$
MSRP
39 mm
Heel
8 mm
Heel Drop
Endorphin Pro
Previous model
WHO IS IT FOR
This shoe is for the serious runner who is looking to set a PR on race day. It also doubles as a daily trainer due to its ample cushioning.
Help me choose

The Saucony Endorphin Pro 2 is built to give you that edge you need on race day. It was made for speed and gives your foot an incredible locked-in feel.
It has Sauconys ultralight PWRRUN PB and a carbon fiber plate in the midsole that allows you to reach the finish line in record time.

One of the few updates that I enjoyed would be the lacing system. The new system gives your foot an overall locked-in fit. You can thank the extra loophole that is placed in the middle of the lacing system, which keeps the top of your foot nice and snug when you’re putting in those miles. Other updates were made to this model in the upper and the heel, which we will get into.

I would compare this shoe to Nike’s Vaporfly. It’s not as propulsive as the Vaporfly but is more versatile. Another shoe in the same family would be the Saucony Endorphin Speed 2 or the Endorphin Shift for max cushioned long-distance daily trainers.

My first impression of the Saucony Endorphin Pro 2 was an excited one.

I knew what this shoe had to offer but wanted to test it out for myself. Looking at the first glance made me even more pumped to put them on and take them for a run. Saucony nails it with their design and color combos.

The pair I received was black, gray, and white but the way they are displayed over the upper is very hip and modern. Saucony offers it in multiple colors and patterns that are very eye-catching and fun! The most popular color would be the checkered flag. It just makes the shoe scream “built for speed.”

The technology and craftsmanship put into this shoe are evident just from looking at them. They are quite impressive. Putting them on for the first time was surprising. They felt much lighter than they looked.

Lightweight and breathable were the top two words that came to mind. Sliding my foot into the upper felt like a dream. They felt like I was wearing a sock that was attached to a sole. The improvement to the upper left me with no real complaints about how this shoe feels and I also can’t think of another shoe that’s more pleasing to put on.

My first run was a timed 5k. Right away I took off and got into my stride.

Saucony has engineered a technology called Speedroll. This technology helps you invest in the body’s natural forward momentum. The makeup of this shoe generates a propulsive feel with every step. But, I didn’t feel as though my foot was being rocked forward. I think it does a great job taking my natural gait and helps make me faster and more productive.

Let’s dive deeper into the sole of this shoe. This is where the Saucony Endorphin Pro 2 shines. The cushioning remains the same as the previous model and it’s very responsive. Saucony has done a fantastic job of making a racing shoe that offers responsiveness and the right balance of cushioning. The shoe is not too firm or too plush.

The midsole is combined with a few parts that make it is what it is. The PWRRUN PB foam is the glue that makes this possible. The foam is compressed Pebax beads, that are placed in the internal lattice structure which gives you the propulsive feel. This foam will give you a cushioned yet responsive ride.

In the middle of the PWRRUN PB foam, there is an S-shaped carbon fiber plate. The plate runs the full length of the shoe. SPEEDROLL technology is where I think this shoe stands out from the rest. The midsole of the shoe is pretty flat until you get up towards the toes. It curves up near the toe box which propels you forward the moment you start to lean. The transition from heel to toe-off is a smooth as silk feeling. It’s definitely not a springy feeling but instead makes your gait feel effortless.

The Endorphin Pro 2 has an XT-900 outsole with reinforced high-abrasion zones that provide you with traction and durability. This outsole is strategically placed in all the right places. They performed well in wet and dry weather conditions. I used them on the road, sidewalks, and a track.

Those are the only surfaces I would recommend using them on. A shoe to consider in the same brand would be the Saucony Endorphin Speed. The major difference between them would be that it doesn’t offer the carbon fiber plate but other than that the Speed gives you the same features as the Pro.

It has nylon, rather than carbon in its midsole because it’s designed to be a training shoe. The nylon plate is not as stiff and gives you a softer ride, which is what you want when running longer distances. Other similar shoes to consider would be the Nike Vaporfly Next% 2 or the Brooks Hyperion Elite 2.

The upper of the shoe is made of single-layered engineered mesh that is extremely light and keeps the shoe breathable. The two big upgrades from the Pro 1 to the Pro 2 are the lacing system and the heel counter.

The new lacing system has elastic bands that are strategically placed to help achieve a more locked-in fit and helps to keep the tongue in place. The heel counter hugs my heel in place and I didn’t have any slippage, which is typically where I have issues. The Endorphin Pro 2 is true to size and has a ton of room in the midfoot and toe box.

Most racing shoes are very narrow so when putting them on I was surprised with the amount of room they gave me. I used them in rainy conditions and they are not waterproof but the mesh material dried out very quickly following my run.

The Saucony Endorphin Pro 2 is 100% made for racing or running at faster speeds.

You can do other types of training runs in them and be pleased. I think runners of all skill levels would thoroughly enjoy them. I found that they performed very well for speed workouts and tempo runs.

If you’re looking for a shoe for slower long runs or recovery miles, I wouldn’t recommend using this shoe for that. Running in this shoe at a slower pace doesn’t allow you to feel the benefits of pushing off your toe at higher speeds. This shoe has been one of my all-time favorites to wear since the first time I took them out for a run.

Trying to think of something I disliked about this shoe is very hard. Saucony has put together a well-made high-performance shoe that sure won’t disappoint the runner who wants to go fast.

As editorial policy, we do not accept free samples from companies.
We purchased this pair of Saucony Endorphin Pro 2 at Running Warehouse with our own money.

Visit ShopSaucony
This page contains affiliate links. As an Amazon Associate I earn from qualifying purchases.
WHERE TO BUY
LOWEST PRICE
$161
AVAILABLE ON SALE:Previous model $94

Lives in Marietta, Pennsylvania with her husband, two kids, and dog. Olivia is a personal trainer and soccer coach. She has been running for 10 years and competes in various distances. For the past few years she has been concentrating on the ultra distances.She never would have thought that one sport would change her whole outlook on life like running has.