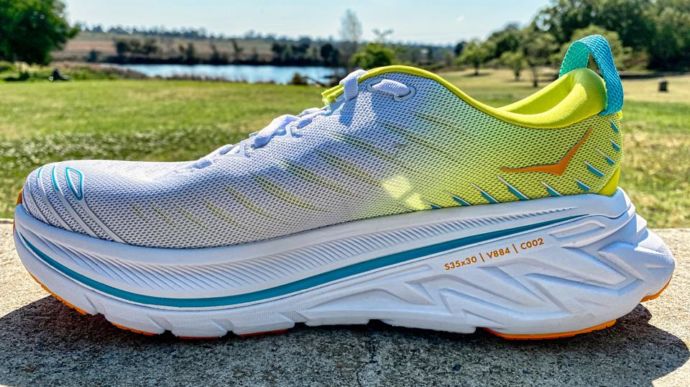 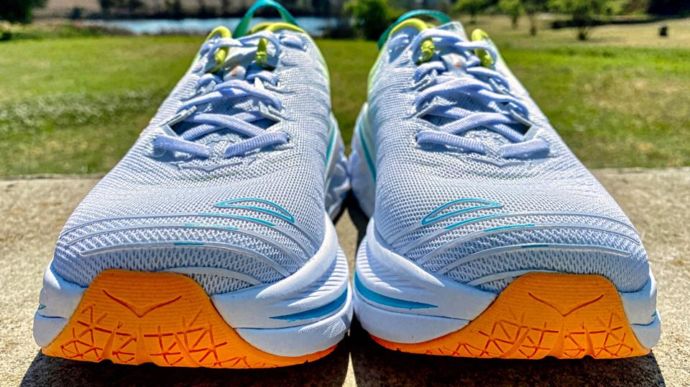 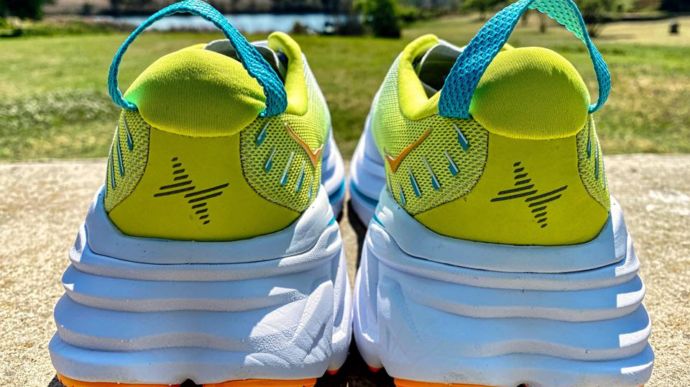 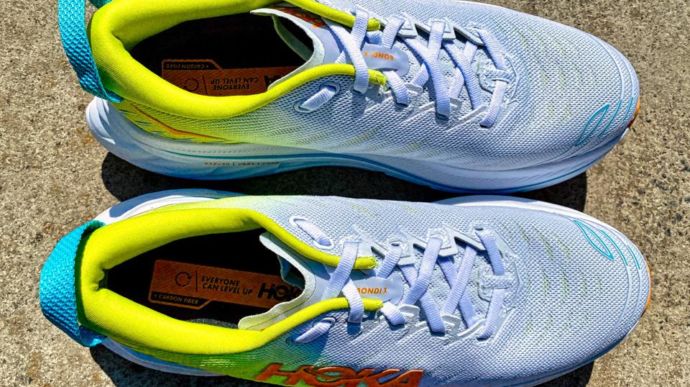 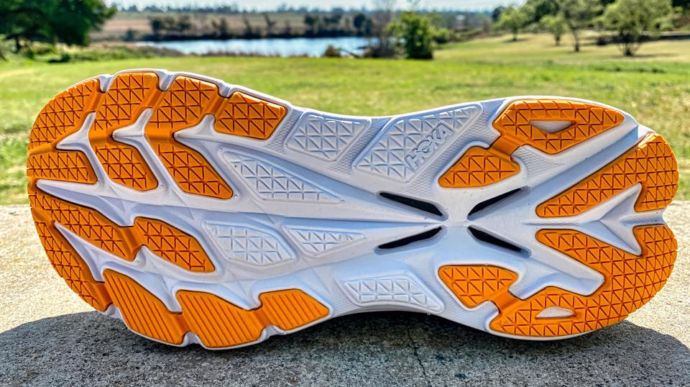 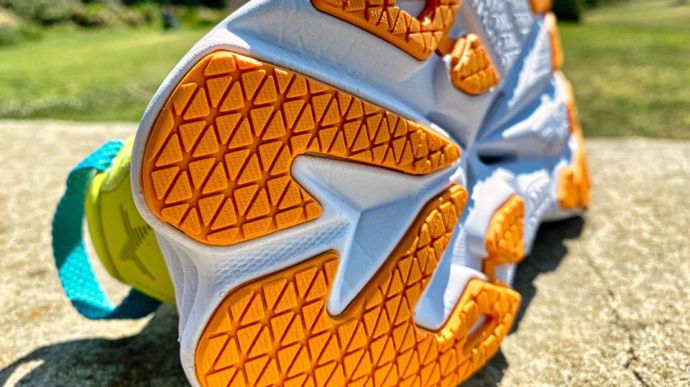 The Hoka One One Bondi X is a super premium, max-cushioned trainer with a carbon plate in its midsole that makes it feel snappy. The Bondi X is softer, more comfortable and more versatile than the regular Bondi 7 but it does come with a $50 higher price tag.
WHERE TO BUY
LOWEST PRICE
$0
SHOE INFO
Hoka One One
Brand
OKA ONE ONE Bondi X
Model
Cushioning
Type
10.60 oz. (301 gr.)
Weight
200.00 US$
MSRP
33.5 mm
Heel
28 mm
Toe
5.5 mm
Heel Drop
WHO IS IT FOR
If you're a runner who wants a unique carbon-plated trainer which is stable, highly cushioned and suitable for slow-pace running, the Bondi X is the shoe for you.
Help me choose

First came the Carbon X, it was then followed by the Rocket X and now we have the Bondi X. The Bondi X is the third and newest Hoka series to feature a carbon plate.

There are two types of carbon plates. In some racing shoes, the carbon plate provides a phenomenal bouncy snap that shoots you forward with every toe-off.

In other shoes, the carbon plate is more restrained and it merely improves transitions by making the midsole stiff, in turn improving efficiency. The carbon plate in the Bondi X falls into this category.

The Bondi X is a spinoff of the Hoka Bondi series which is now on its 7th iteration. When I tested the Bondi 7 last year, I was disappointed with how firm it was.

When I first saw pictures of the Bondi X, I was both surprised and confused. To me, it didn’t make sense to have a carbon plate in a max-cushioned trainer which is designed for slow, easy runs.

Opening the large box, I was bowled over with how oversized the midsole of the Bondi X was. According to the print on the medial side of the midsole, the volume of the midsole is 884, much more than the Carbon X 2’s 728.

I tried to flex the midsole with my hands but it was extremely stiff. The plate in the Bondi X (C002) is the second carbon plate iteration and is different to the plate in the Carbon X 2 and the Rocket X (both C001).

Putting the shoe on for the first time and walking around the living room, I was relieved that there was no poking arch sensation like in the Bondi 7. It felt much more comfortable.

My first run was a 7 km easy run and it took some time to break-in the Bondi X. In the first couple of kilometres, the shoe felt awkward and blocky but by the end of the run, the midsole had softened up, the plate had become more malleable and the forefoot had gained a little more flexibility.

Hoka claims that this is the softest foam they’ve ever used in a midsole and I agree with their claims. The Bondi X definitely feels like the plushest and most cushioned shoe in the Hoka range and it’s now on par with the Glycerin, Triumph and other max-cushioned trainers.

I actually found it too soft for anything faster than 5 minutes per km pace. It felt like I was fighting with the soft cushioning when I was trying to go fast because my feet were sinking down into the foam too much.

The gigantic heel stack of the Bondi X looks like it far exceeds the maximum height allowed by World Athletics to race official events in but it’s an optical illusion.

Your heel sits deep inside the midsole so the actual heel stack height is only 33.5 mm. There’s a tall midsole sidewall that surrounds your heel and cups it, so it feels similar to the Ultraboost 21.

An early stage Meta-Rocker helps to quicken transitions while the stiff carbon plate stops the midsole from flexing so the rocker can work effectively. This makes it feel like the shoe is saving you energy.

I like the Bondi X most on easy or recovery runs for short or middle distances. Its thick, well-cushioned midsole provides plenty of protection from the ground with very little ground feel. It feels far too bulky for faster efforts and long runs because of its voluminous midsole. It’s by far the “biggest” shoe I’ve ever worn.

The plate in the midsole flexes up in the front at the forefoot. The forefoot has a little less flexibility than the Carbon X 2/Rocket X because of the Bondi X’s thicker midsole so the ride of the Bondi X feels more rigid and less natural. The plate still however provides a powerful toe-off which propels you forward because of its rigidity.

Rubber is placed on the rearfoot and the forefoot with exposed midsole foam on the midfoot. There are also narrow slits cut into the foam to display the carbon plate. The slits tend to pick up small stones and seeds during runs.

Outsole durability is average and on the same level as the Clifton 8. I noticed the most wear on the outer lateral heel lip where the midsole meets the rubber. The exposed midsole foam also shows significant wear early on but it doesn’t affect the ride.

The Bondi X’s upper is made of mesh with 3D hotmelt yarns which sounds fancier than it actually is. It reminds me of the mesh of the Rincon 1 but it’s softer and more flexible. Breathability is acceptable, even in 28 degree Celsius weather.

The tongue of the Bondi X is an asymmetrical, racing-inspired one which is lightly padded. It’s gusseted but I still found it too short and it slides downwards during runs.

Another thing that I didn’t like about the upper is that the orange Hoka logo on the tongue bleeds onto the white laces and turns them orange.

The heel tab and collar lining are padded but the padding is not as dense as the foam collar padding of the Bondi 7 which is made of memory foam. The luxurious inside lining of the collar is soft and smooth. Heel lockdown was excellent for me although I did have to use a runner’s knot.

The Bondi X runs true to size with a spacious midfoot and toe box that’s uncharacteristic of Hokas. It’s one of the most comfortable Hoka uppers I’ve worn.

HOKA ONE ONE Bondi X Conclusion

The Bondi X is an unlikely combination of components with its oversized, max-cushioned midsole and its stiff carbon plate. On paper, it doesn’t sound like a winning combination but in reality, the Bondi X feels like a surprisingly cohesive and polished experimental shoe.

In my opinion, the Bondi X is a much better shoe than the Bondi 7. It’s wider, more comfortable, softer and it feels more versatile. It’s also lighter and a lot more fun to run in because it doesn’t have the Hoka “bucket seat” that pokes into your arch.

If money wasn’t an issue, I’d pick the Bondi X over the Bondi 7 any day of the week but at $200, it’s extremely expensive for an easy day/recovery shoe. The Carbon X 2 and the Rocket X are much lighter, cheaper, and more versatile than the Bondi X. You can train and race in both of them.

The Bondi X is a fun shoe but it doesn’t make it into my shoe rotation. On easy/recovery days, I want to run slowly so I don’t need a carbon plate. For steady or tempo runs, there are much better options that are lighter and more propulsive than the Bondi X.

The Bondi X is however a uniquely plush, luxury cruiser with a lively toe-off that will appeal to certain runners.

As editorial policy, we do not accept free samples from companies.
We purchased this pair of HOKA ONE ONE Bondi X at Running Warehouse with our own money.

Hoka One One OKA ONE ONE Bondi X Price Comparison

Visit ShopRunningWarehouse.Com
This page contains affiliate links. As an Amazon Associate I earn from qualifying purchases.
WHERE TO BUY
LOWEST PRICE
$0

Similar shoes to Hoka One One OKA ONE ONE Bondi X