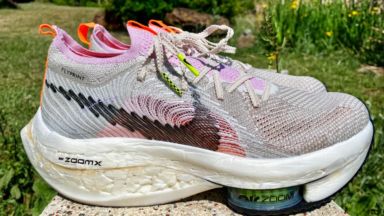 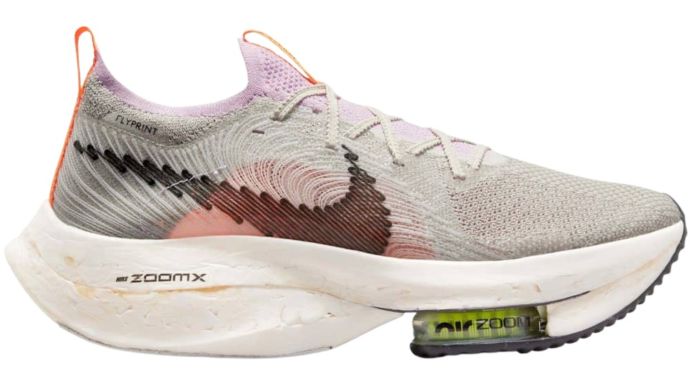 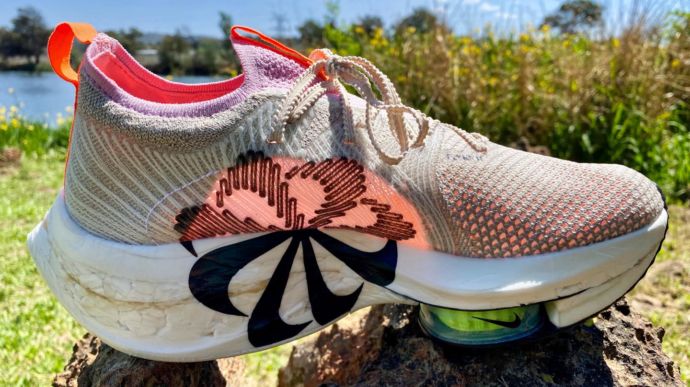 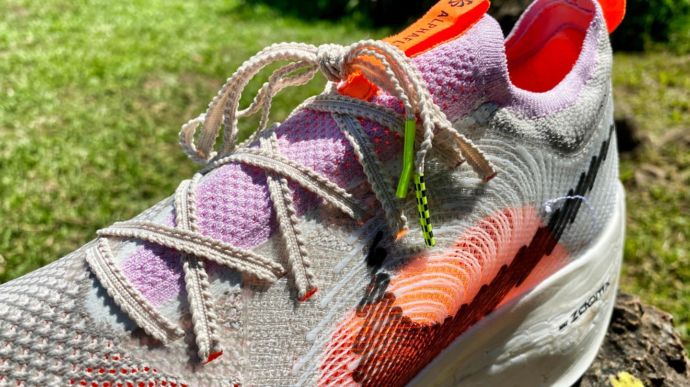 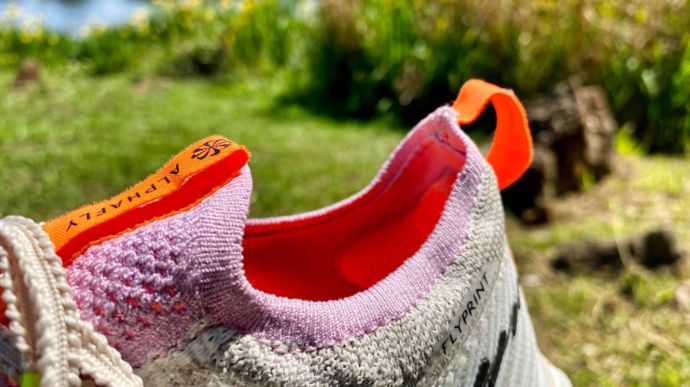 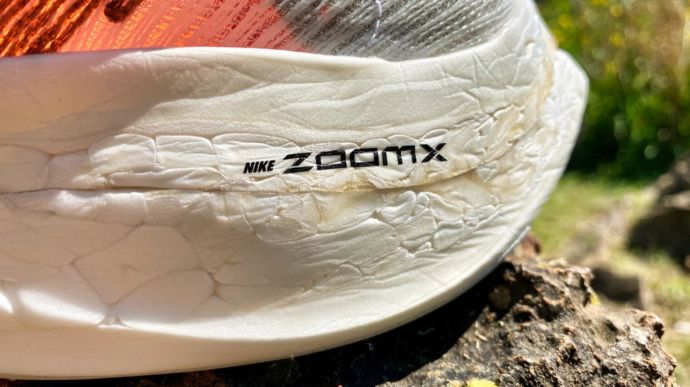 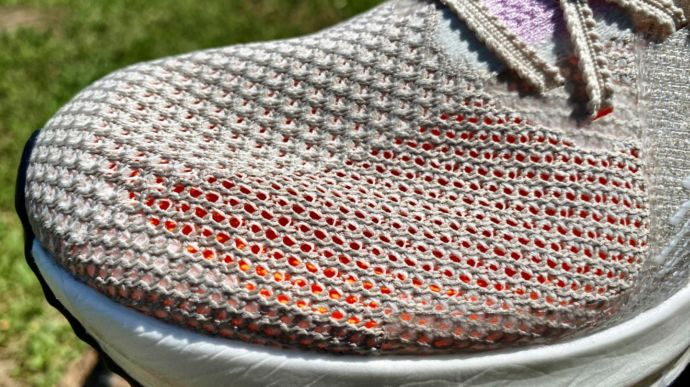 The Air Zoom Alphafly Next Nature is a fast and natural-feeling super shoe which has exceptional versatility but comes with a hefty price tag. This Nature version of the Alphafly is partly made with recycled material. It has a firmer midsole so it has a faster ride but its upper is more relaxed so it has a lower level of foot lockdown.
WHERE TO BUY
LOWEST PRICE
$300.00
SHOE INFO
Nike
Brand
Air Zoom Alphafly Next Nature
Model
Racing
Type
9.20 oz. (261 gr.)
Weight
300.00 US$
MSRP
39 mm
Heel
35 mm
Toe
4 mm
Heel Drop
WHO IS IT FOR
If you're an Alphafly collector or if you loved the feel of the Alphafly Next% but you found its ride too soft, the Alphafly Next Nature is the shoe for you. It has a more stable ride than the original but is also much heavier.
Help me choose

When Eliud Kipchoge broke 2 hours for the marathon distance while wearing the Alphafly Next%, it was the most hyped shoe on the planet and countless runners couldn’t wait to get their hands on it and also run in it.

The Alphafly Next% is arguably one of the most technologically advanced running shoes that Nike has ever built, however over the past year, sales of the Alphafly have been eclipsed by the Vaporfly Next%, the cheaper Nike racing shoe.

The majority of runners who have tried both racers, prefer the lighter, less complicated ride of the Vaporfly Next%. We’ve even seen elite runners such as Galen Rupp and Eliud Kipchoge who used to exclusively race in the Alphafly Next% now opting for the Vaporfly Next% for certain races.

In the World Marathon Majors in 2021, Nike racing shoes took 14 podium spots in total. 13 spots were taken by the Vaporfly and only 1 by the Alphafly. Such is the dominance of the Vaporfly.

Personally, I prefer the ride of the Alphafly over the Vaporfly. It feels more stable so it’s easier on my ankles, its rocker makes ride transitions more natural so my calves don’t feel as stiff and I enjoy the extra, bouncier cushioning.

Nike now hopes to up sales of their most premium racing shoe range with a new, Nature version. Kipchoge even wore the Alphafly Next Nature for the Paris Marathon last month as part of a publicity campaign.

Its midsole still uses ZoomX foam but it consists of scraps of ZoomX which have been glued together. Its upper is no longer Atomknit but a combination of Flyknit and Flyprint.

This Nature version of the Alphafly weighs a very substantial 1.8 oz (51 g) more than the original and it also costs an unbelievable $25 more, making it the most expensive super shoe. It still has a 4 mm offset and still measures 39 mm in the heel.

When I took the Alphafly Next Nature out of its box, I thought that it had a very rustic look. The crumbly texture of the midsole foam bore a resemblance to feta cheese while I could see the brown glue stains from where the 2 parts of the midsole were glued together, very uncharacteristic of any other Nike running shoe.

The first time I put the Alphafly Next Nature on, its upper made the biggest impression on me. It felt thicker, more relaxed and more comfortable. The slim waist of the midfoot also hugged my arch like in the first version.

I expected the cushioning to feel softer than the older Alphafly but when I walked around in it, it felt surprisingly firmer. The recycled ZoomX scraps must have a high rate of compression, making the midsole denser than the original.

My first run was a 19 km threshold run and I thoroughly enjoyed it. The ride felt very similar to the Alphafly Next%: stable, natural and forgiving.

The run had some hills with 233 m elevation gain but by the end of the run, I was amazed how effortless the run felt. It was definitely one of my fastest threshold runs.

The only area I was disappointed with was the overall foot lockdown which was a result of the modified, more relaxed upper.

Although the ride feels the firmest of the Nike super shoes, the Alphafly Next Nature still has plenty of deep cushioning and long-distance comfort. It’s still much softer and more cushioned than other super shoes like the Metaspeed Edge and the Carbon X 2.

Due to the firmed up midsole foam, stability is also better than in the original Alphafly. There is less lean bias so it’s easier on the ankles and going around right corners can be done at a faster pace.

Just like in the original Alphafly, transitions in the Alphafly Next Nature are not as smooth as in the Vaporfly or other super shoes due to the midfoot of the Alphafly which floats above the ground. As you transition from the heel, you go straight to the forefoot, skipping out the midfoot, so the ride feels disjointed.

The heel of the Alphafly Next Nature is also much softer than the forefoot because of the forefoot Zoom Air units which compress a lot less than you’d expect them to.

The Alphafly Next Nature is a super shoe which is extremely versatile. It feels stable and natural during easy paces thanks to its wide base and it also excels at tempo runs due to its rocker and air units which activate when you pick up the pace. Any distance feels comfortable in the Alphafly.

I find it most effective when I’m going faster than 4.30 per kilometre because at those speeds, I’m leaning forward and engaging the rocker. It’s really easy to increase my cadence with such a high toe-spring and stiff forefoot.

While some find the giant Zoom Air units to be gimmicky, I can feel the rebound from them during faster efforts and I enjoy the extra springiness that they provide. They also don’t feel lumpy like in the Tempo Next% because of the rigid carbon plate.

The Alphafly Next Nature’s carbon plate is made from 80% recycled carbon fibre and it feels stiffer than the one that’s found in the Vaporfly Next% so the Alphafly’s midsole flexes less. This results in a more effective rocker.

The plate also doesn’t have as steep a curve as the one found in the Vaporfly Next% so the Alphafly Next Nature doesn’t feel as snappy because the springboard sensation is muted.

On the outsole, the forefoot section is a lot more durable than the rearfoot. It’s reinforced with thick, durable rubber to protect the Zoom Air units and the rubber is ribbed so it provides excellent non-slip grip.

Two materials are used in the upper of the Alphafly Next Nature, Flyknit and Flyprint. Flyknit is commonly found in other Nike trainers in the performance range but Flyprint is an advanced 3D-printed material which was first seen on the Vaporfly Elite Flyprint 3D version.

The toe box, collar and tongue are stretchy, knitted Flyknit, while the midfoot and heel sections are smooth, glossy Flyprint. Nike claims that Flyprint has almost zero water retention so it’s a perfect material for racing.

The Alphafly Next Nature utilises a bootie construction like the Alphafly Next% but the fit feels more relaxed and the materials feel thicker, more durable.

Flyknit is stretcher than Atomknit so the Alphafly Next Nature feels more comfortable than the original, however it has one big flaw and it relates to heel lockdown.

Being a bootie construction, there are no last-row double eyelets, so it’s impossible to employ a runner’s knot. This results in a loose heel, no matter how tight you tie the laces and it’s the worst heel lockdown of all the super shoes I’ve tried.

The Alphafly Next Nature fits true to size but it has a snug, racing fit so you definitely need to go up a half size if you prefer your uppers roomy, although the heel slippage will be even worse. It also has a very slim midfoot which is best suited to narrow feet with high arches.

The Alphafly Next Nature isn’t the fastest super shoe and it definitely isn’t the lightest. It is however one of the most cushioned legal racers you can buy (the Prime X is banned by World Athletics) and it also has one of the most natural-feeling rides.

I understand why the Vaporfly Next% is the choice for most Nike sponsored elite marathon runners rather than the Alphafly. The Alphafly just doesn’t have that signature Vaporfly spring-like snap. It compensates with a rocker which is easy on the calves and energy-saving over long distances.

Compared to the regular Alphafly Next%, the Nature version has a firmer ride which makes it faster and more stable but unfortunately, its thicker upper is more relaxed so it results in a loose heel counter which is not ideal for racing. The thicker upper and denser midsole also come with a vast increase in weight.

We have to give Nike kudos for their eco-friendly attitude and their effort to try to save the world but the astronomical price tag of the Alphafly Next Nature doesn’t make sense.

If anything, it should be cheaper than the regular Alphafly because you’re getting a midsole that is made of scraps of used ZoomX and an upper made from leftover airbag waste.

I’ll keep using the Alphafly Next Nature in my rotation for training but I definitely won’t be racing in it. At 9.2 oz (260 g), it’s the weight of a daily trainer which is way too heavy for a racing shoe.

If you’re one of those running shoe geeks with an Alphafly fetish who collects every colourway and every version of the Alphafly, then the Nature version is a must buy but for the average runner who is looking into trying an Alphafly, I would recommend the Alphafly Next% instead. It’s cheaper, lighter and it has a more secure foothold.

The limited-edition Alphafly Next Nature has a lot more character than the original with its rustic look and its eco-friendly composition but it shouldn’t come at the tradeoffs of a $25 higher price tag and a 1.8 oz (51 g) weight increase.

As editorial policy, we do not accept free samples from companies.
We purchased this pair of Nike Air Zoom Alphafly Next Nature at Running Warehouse with our own money.