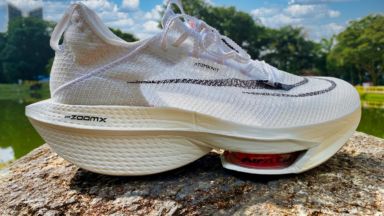 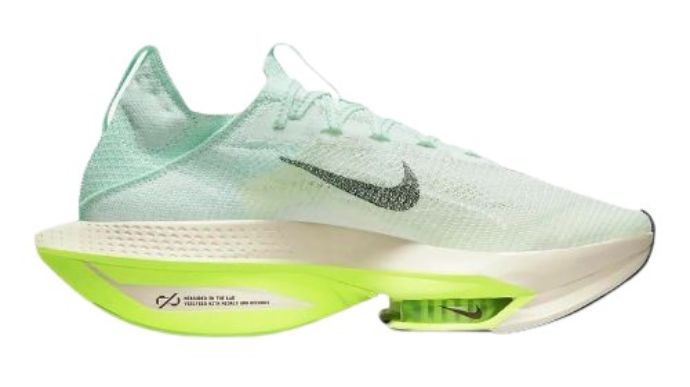 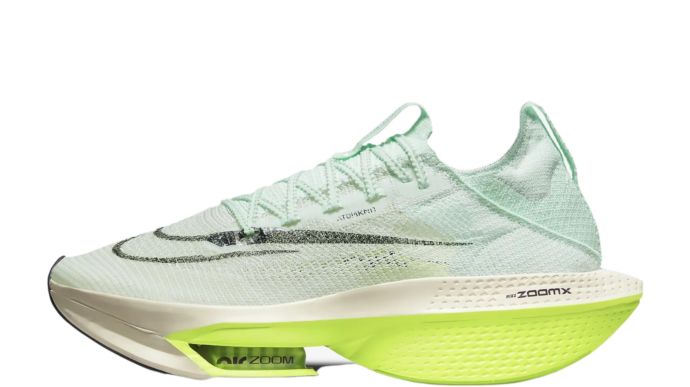 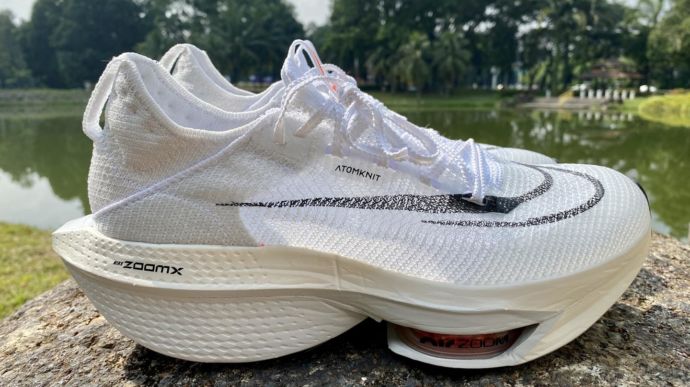 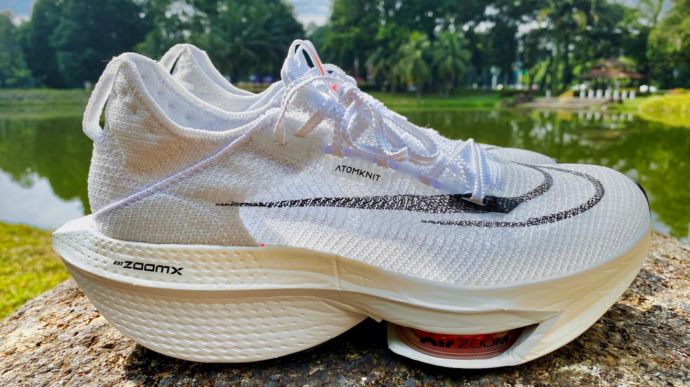 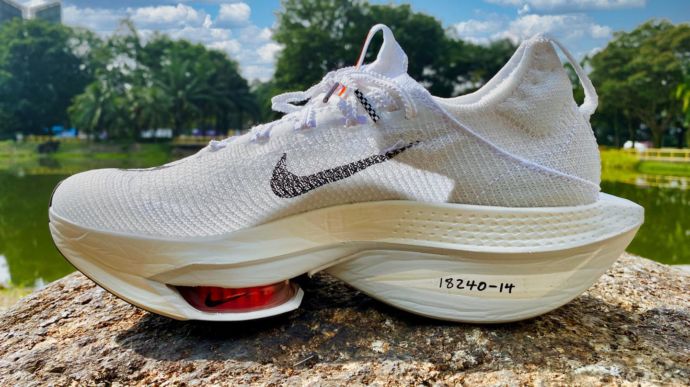 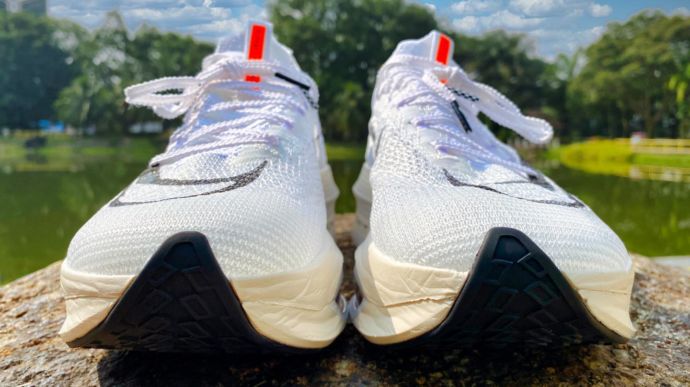 The Nike Alphafly Next% 2 is a super shoe which was designed for narrow-footed runners and runners with high arches because it has a very narrow midfoot. It’s best suited to short, fast-paced workouts rather than long runs because of its firmer ride and prominent arch. This version has been updated with a new, snugger Atomknit 2 upper, a more durable, flatter outsole and a wider, more stable midsole.
WHERE TO BUY
LOWEST PRICE
$274
SHOE INFO
Nike
Brand
Zoom Alphafly Next% 2
Model
Racing
Type
8.00 oz. (227 gr.)
Weight
275.00 US$
MSRP
8 mm
Heel Drop
Air Zoom Alphafly Next Nature
Previous model
WHO IS IT FOR
If you want a super shoe with a stable ride that's firmer than most super shoes, the Alphafly 2 is an option. This expensive super shoe needs you to have powerful footstrikes in order to engage the Zoom Air units in the forefoot.
Help me choose

I’m not sure how many Alphaflys Nike would have sold if it wasn’t Eliud Kipchoge’s signature racing shoe. Nike has been using Kipchoge, their most powerful marketing weapon to push sales of their most expensive racing shoe since its conception and it’s been very effective.

Over the past year, Nike has strategically “leaked” photos of the Alphafly 2. Pictures of Eliud wearing prototypes of it in training sessions in Kenya have been circulating on social media channels and creating additional hype for one of the most anticipated running shoe launches of the year.

The Prototype colourway of the Alphafly Next% 2 sold out within minutes in selected countries and sold out wherever it was launched. I was lucky enough to grab a pair of the rare colourway but it was a stressful morning, waiting for the drop on the Nike app.

The Prototype colourway is made to look like a pre-production version, with minimal colours. It also has numbers printed on the midsole which are made to look like a human wrote them with a permanent marker, to decipher which wear test version it is.

Even though the Alphafly is one of the more popular super shoes, it isn’t as popular as the other Nike super shoe, the Vaporfly.

This is due to 2 main reasons:

Some runners, especially those with wide, flat feet find it uncomfortable. With the first 2 versions, the prominent arch was noticeable but bearable for me.

The Alphafly Next% 2 is actually the third version of the Alphafly series. The second version was the environmentally friendly Alphafly Next Nature which I reviewed last year. I found the Next Nature version to have a firmer ride than the original and it had a more relaxed upper, however, its astronomical price and its heavy, trainer-like weight didn’t make any sense.

The first time that I saw the “leaked” images of the Alphafly 2, I was stoked to see that it was a complete overhaul: new outsole, midsole and upper. The extra layer of foam underneath the air pods looked like it would provide a softer ride than previous versions which would be a welcome change.

When I laced it up and walked around in it for the first time, I could feel the prominent arch against my midfoot which felt uncomfortable. This is a trademark of the Alphafly because its midfoot is so narrow. Normally the poking arch sensation doesn’t bother me during runs.

My first run was a speed workout consisting of 500 m intervals followed by 200 m intervals. The first thing that I noticed was how much quieter it sounded than the last 2 versions. You no longer sound like a galloping horse when wearing the Alphafly Next% 2. This is due to the new, extra layer of ZoomX situated under the Zoom Air pods.

The ride felt surprisingly firmer than the original version and slightly firmer than the Next Nature version. The workout felt great and I was able to reach top speeds of around 3 minutes 30 seconds per km (5:38 mins per mile) effortlessly.

My second run in the Alphafly 2 wasn’t as positive as the first fun. It was a moderately paced run, so I was landing further back in the shoe during transitions. Throughout the run, the narrow midfoot was creating an uncomfortable hotspot against the arch of my left foot.

I desperately wanted to turn back and get the shoes off as soon as possible. When I got back home and took it off, there was a blister on my arch from all the friction. I was wearing medium-thick socks and this was never a problem for me in the first 2 versions.

I have a hunch that Nike changed the formulation of ZoomX to make it firmer and more durable because there aren’t any other noticeable changes which would result in a firmer ride. I feel like the Alphafly 2 isn’t using ZoomX to its full potential with such a firm ride. It’s supposed to feel springy, bouncy, and lively.

The Alphafly 2 has a firmer ride than most super shoes. The Metaspeed Sky+, Vaporfly Next% 2 and Adios Pro 3 all have softer rides and when running in the Alphafly 2, I crave the pleasant ZoomX squish that I get in other top tier Nike running shoes.

It takes a while to learn how to run in the Alphafly 2 effectively. It encourages you to “stomp the ground.” When I load up the shoe, I can feel the powerful Zoom Air units in the forefoot respond and propel me forward which I don’t feel when I’m running lightly on my feet. Heavier runners won’t need to load up the shoe as much because the Zoom Air units will compress naturally.

The Alphafly has the same high toe-spring as the first two versions, offering a highly efficient and energy-saving rockered ride, especially during longer efforts. It’s easy to get into a rhythm and rack up miles without putting in as much effort.

The narrow midfoot is a problem and the Alphafly 2’s biggest weakness. If Nike just made the waist of the shoe a couple mm wider, it would be suitable for a much wider audience.

I had to wear really thick, blister resistant socks to protect my arch but I wouldn’t feel comfortable wearing the Alphafly for long-distance marathon runs. I’m lucky because I have narrow feet but I can imagine that flat-footed runners with wide feet will find running in the Alphafly 2 like running in some kind of torture device.

The carbon plate in the midsole of the Alphafly is stiff but it doesn’t dip down at the forefoot like the Vaporfly’s plate does because the Air Zoom units are in the way so the Alphafly 2’s plate has a much flatter profile and doesn’t feel as aggressive. It lacks the punch that other super shoes such as the Vaporfly Next% 2 and the original Metaspeed Sky have.

Stability has been improved as a result of the ride being firmer. It also has a wider heel than previous versions so going around tight corners and making U turns is no problem in the Alphafly 2.

The outsole is an improvement over the previous 2 versions. The rubber strips covering the rear foot now extend further towards the midfoot so there is less exposed midsole foam in the midfoot. The forefoot rubber is also flat now compared to the ribbed forefoot rubber on the earlier versions so wear is spread more evenly.

A “V” shaped cavity exposes the carbon plate under the midfoot. This is also a new weight-saving feature which wasn’t present before.

I expect the Alphafly 2 to have good durability compared to other super shoes because it doesn’t have many midsole foam areas which come into contact with the ground during transitions. After my testing period, I’ve seen only small amounts of wear on the lips of the decoupled groove and on the edges of the diamond-shaped hole in the forefoot.

Grip is fantastic in the Alphafly 2, even though it doesn’t have a full ground contact outsole. I had no issues with traction in wet conditions.

It still has a bootie construction and I’m not a big fan of bootie constructions on racing shoes because it doesn’t provide great foot lockdown. You can’t use a runner’s knot so during workout runs when I was sprinting, I noticed that the heel was loose but not so bad that there was heel slippage.

The padding on the inside of the heel counter is not as plump as in the last 2 versions so there is more space between my heel and the heel counter- this is the main cause of the loose heel problem.

The lacing area is thicker and more padded on this version, so the top of your foot has more protection from lacing pressure.

The Alphafly 2 has a narrower, snugger fit than version 1 especially at the midfoot and forefoot so I find version 1 and 2 more comfortable. It fits me true to size but I have narrow, low volume feet. I recommend going a half size up if you’re between sizes or if you have high volume feet.

Nike really doesn’t like runners with flat arches. The Infinity Run 3 and the Alphafly Next% 2 are the 2 neutral shoes with the most significant arch-poking sensations of all the running shoes on the market.

If you don’t have narrow feet or high arches, I wouldn’t recommend the Alphafly 2 to you because the narrow midfoot becomes extremely uncomfortable on long runs. The Alphafly Next% 2 just didn’t work for me. I never got used to the poking-arch sensation and I couldn’t wait to take it off after every run.

Compared to the original Alphafly Next% and the Next Nature version, the Alphafly Next% 2 is firmer and more stable but it has lost some bounce and energy return so it doesn’t have as much long-distance comfort. It also has a snugger, more narrow-fitting upper so you might need to size up.

Given the choice, I’d pick the original Alphafly Next% because I prefer a softer, more lively ride. The new version doesn’t have that pleasing squish during footstrikes and that high energy return on toe-offs. The only things that I like about the update are that it has a quieter ride due to the layer of foam underneath the air pods, that it is more durable and more stable.

In my opinion, the Alphafly Next% 2 is not a good update. Nike only needed to change one thing and to make the midfoot wider which they failed to do. At $275, it’s still one of the most expensive running shoes and I definitely wouldn’t buy it again.

There are plenty of other, cheaper super shoes which are more comfortable, lighter and more fun to run in.

As editorial policy, we do not accept free samples from companies.
We purchased this pair of Nike Air Zoom Alphafly Next 2 at Running Warehouse with our own money.

Visit ShopRunningWarehouse.Com
This page contains affiliate links. As an Amazon Associate I earn from qualifying purchases.
WHERE TO BUY
LOWEST PRICE
$274