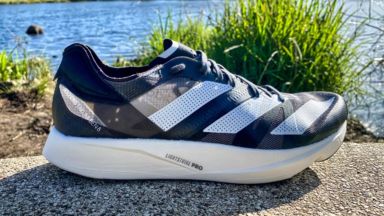 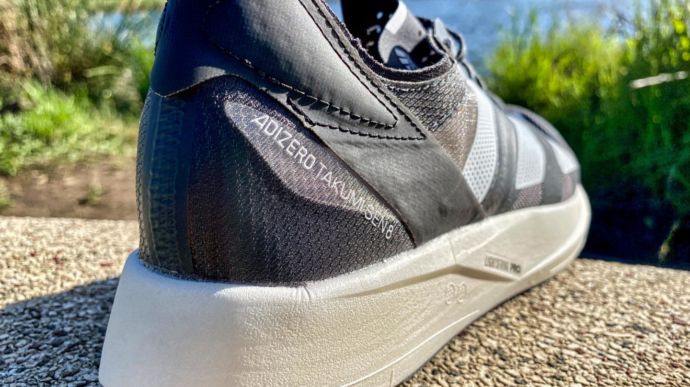 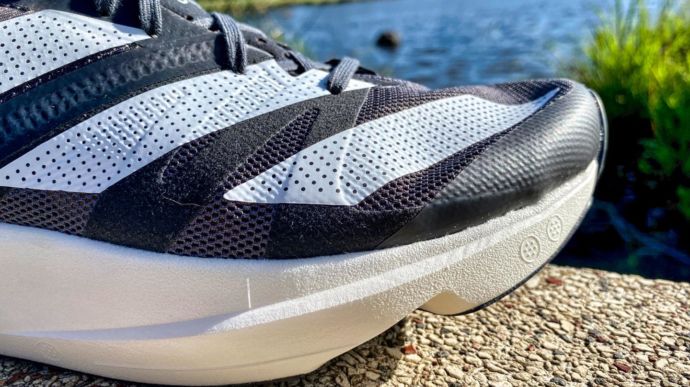 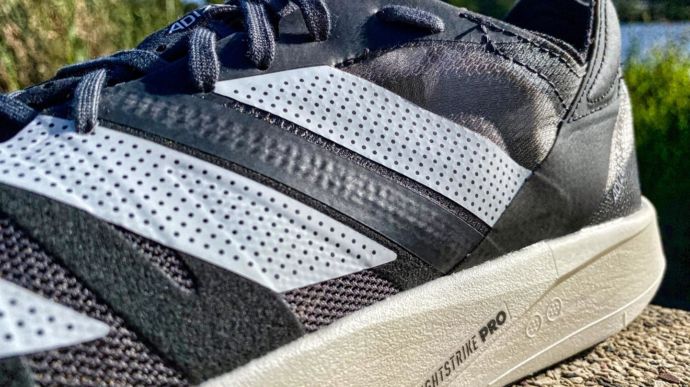 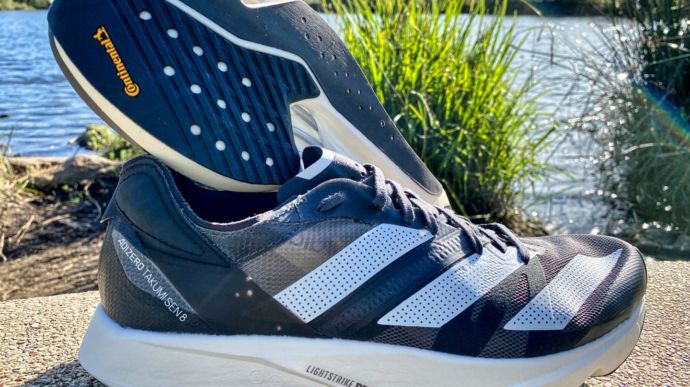 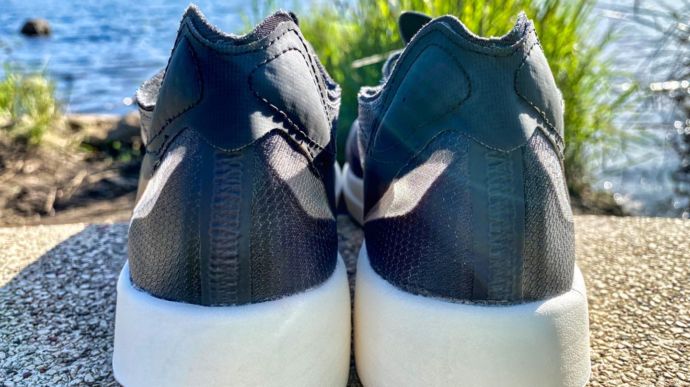 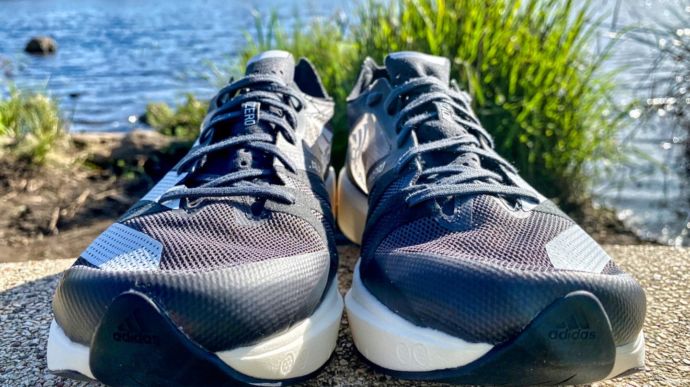 The Adidas Adizero Takumi Sen 8 is a specialist racer best suited to 5 km races and short-distance interval workouts. Version 8 is a big departure from version 7 because it now has a thicker, Lightstrike Pro midsole and EnergyRods which make it stiffer.
WHERE TO BUY
LOWEST PRICE
$89
SHOE INFO
Adidas
Brand
adizero Takumi Sen 8
Model
Racing
Type
6.80 oz. (193 gr.)
Weight
179.95 US$
MSRP
33 mm
Heel
27 mm
Toe
6 mm
Heel Drop
WHO IS IT FOR
If you're looking for a light training shoe for speed workouts or a short-distance racing shoe, the Takumi Sen 8 could be the shoe for you.
Help me choose

“An artisan of the highest order.” That’s what the name Takumi Sen translates to. It’s a specialist Japanese racing flat which means that it’s a racer with a flat ride.

For the majority of runners, it’s only a 5k/10k racing shoe but 4 years ago, Mary Keitany won the 2018 New York City Marathon wearing the Takumi Sen 3 which showcases its ultimate potential.

I ran in the Takumi Sen 7 last year and I found it very minimal. I only used it for short interval workouts because it had very little cushioning and the toll that it took on my legs during longer runs wasn’t worth the reward. It had an extremely high level of ground feel due to its pancake-thin midsole.

For a long time, the Takumi Sen series has seen a limited release, selling mainly in Japan where racing flats are revered and in a few other Asian countries. Adidas has now decided to transform the Takumi Sen into a much more mainstream shoe.

The Takumi Sen 8 has been completely revamped. Not only does it have a brand new upper, midsole and outsole but it now shares components with Adidas’ flagship marathon racer, the Adios Pro 2. Now they both have full Lightstrike Pro midsoles and EnergyRods.

The first time I saw pictures of the Takumi Sen 8, I was both excited and surprised at how different it was compared to the Sen 7. I’ve been fond of all the other Adidas training and racing shoes that use Lightstrike Pro so I was hoping that the Sen 8 would be the same.

The first thing I did when I received the Sen 8 was I relaced both shoes. Adidas laces their shoes in an odd way which goes from the outside of the eyelets to the inside, unlike all other brands that lace from the inside to the outside. This makes it difficult to adjust when putting the shoe on.

My first run was a 10 km progression run starting at easy pace and ending at race pace. It felt fast and didn’t need a break in period but after the run, I noticed that I had a blister on the medial side of my midfoot because of how narrow the waist of the shoe is. I also noticed that the Sen 8 felt really unstable due to its narrow rearfoot and midfoot.

For my second run, I wore thicker, blister resistant socks. It was a 1 km repeats speed workout and I did 7 repeats in total. All of them were between 3.30 and 4 minutes per km pace. The first 5 km felt good but for the last 2, my feet felt really sore under the balls of my feet due to the lack of cushioning.

After my second run, I noticed another blister, this time at the base of the underside of my big toe. In my 3 years of testing shoes, I’ve never once gotten a blister from any other shoe so it was disappointing that I got 2 in my first 2 runs in the Sen 8.

I also noticed that I had some trouble keeping up with the other members of my running club who were wearing full-length, carbon fibre shoes for the workouts. The Sen 8 didn’t feel as fast due to its flexible forefoot.

It’s surprising how much difference a couple of millimeters of stack height can make. The Takumi Sen 8 uses Lightstrike Pro in its midsole, the same super foam that Adidas uses in their long-distance racing speedsters, the Adios Pro 2 and the Prime X, however, the ride of the Takumi Sen 8 feels noticeably firmer.

The Sen 8 has a 33 mm heel stack height which is 6.5 mm less than the Adios Pro 2 and this makes it a lot less versatile. I wouldn’t choose the Sen 8 for anything further than 10 km because the cushioning depth isn’t there.

Not only is the cushioning not very deep but it’s also a very unstable shoe so the longer you run in it, the more pressure it puts on your ankles. After occasional runs in the Sen 8, I could feel ankle discomfort afterwards so if you’re an overpronator, I’d stay far away from it.

The Sen 8 also has a chunk of foam cut out of its midsole on the medial side so that you can see the EnergyRods but this cutout is one of the reasons that make the Sen 8 so unstable. It also makes ride transitions less smooth.

The EnergyRods in the Takumi Sen 8 feel similar to the fibreglass ones in the Boston 10 because they have a degree of flexibility to them unlike the carbon infused ones in the Adios Pro 2/Prime X.

The result of these flexible EnergyRods is that the Sen 8 feels more natural and more similar to a training shoe than a stiff super shoe.

I found that the Sen 8 didn’t feel great during fast 5 km and 10 km paces but it felt better at slightly slower paces between 4 and 5 minutes per km, a bit faster than easy pace.

For really fast paces I prefer stiffer shoes which provide more assistance. The Sen 8 flexes so it doesn’t provide a forefoot rocker like its big brothers the Adios Pro 2/Prime X. It also doesn’t have a forward launching, spring-board type of effect like the Vaporfly 2.

The outsole configuration of the Sen 8 is most suited to forefoot strikers as the entire forefoot is covered in rubber. Thick, durable Continental rubber covers the medial side of the forefoot with a strip of thin rubber on the lateral side.

A strip of the thin rubber covers the edges of the rearfoot but there’s a portion of the lateral heel which isn’t protected so I’ve noticed a lot of scuffing on the foam. There’s also a lot of exposed foam on the midfoot so durability is not great. You’ll want to save the Sen 8 for key workouts or races only.

Outsole grip is top notch and I didn’t have any issues with traction. Continental never disappoints.

The Takumi Sen 8 fits a half size large (it has extra length) and it has a shape known as the Asian last. The Asian last has a wide forefoot that tapers into a narrow midfoot and rearfoot.

I found the Sen 8 to be too narrow in the midfoot and rearfoot because I have flat feet so the arch felt more prominent than most shoes. That’s the reason why I got blisters on my midfoot and I think that wide footed runners will have a problem with the fit of it.

A single-layer Celermesh upper provides excellent breathability but feels “waxy” and rough to the touch so it’s not the most comfortable of uppers. It doesn’t stretch at all so it holds your foot securely in place.

Heel lockdown in the Sen 8 is superb and I never experienced any heel slippage but I did have to adjust the laces often during runs to get the perfect fit. It’s not a “lace and forget” kind of shoe.

The Takumi Sen 8 looks like a super shoe but it isn’t. It doesn’t provide as much speed assistance as the super shoes mainly due to its flexible forefoot and lack of toe spring.

It’s designed to be a specialist 5k/10k racer but I’d much rather have the taller Adios Pro 2 or even the Prime X on my feet for a short race. They feel more aggressive, more propulsive even though they are heavier.

The Sen 8 is much more fun and more versatile than the Sen 7. The increase in stack height and change to a softer foam makes it better for longer distances but I still wouldn’t choose it for anything longer than 10 kilometres.

At $180, I think it’s a tough sell. The Hoka Carbon X 3 is the same price and it has a full-length carbon plate. It’s more stable, more comfortable and it has much more cushioning than the Sen 8. Yes, the Sen 8 is designed to be a short-distance racer but it doesn’t offer any advantages other than its lower weight.

If you find the Adios Pro 2 too heavy or clunky and you prefer a more flexible racing shoe, only then would I recommend the Takumi Sen 8 for you. Just a warning, it does have a very narrow midfoot and rearfoot so it’s not for all foot types.

As editorial policy, we do not accept free samples from companies.
We purchased this pair of adidas adizero Takumi Sen 8 at Running Warehouse with our own money.

Visit ShopAmazon.com
Sorry - Product not found. Please try RunningWarehouse.Com to check in their assortment.
This page contains affiliate links. As an Amazon Associate I earn from qualifying purchases.
WHERE TO BUY
LOWEST PRICE
$89