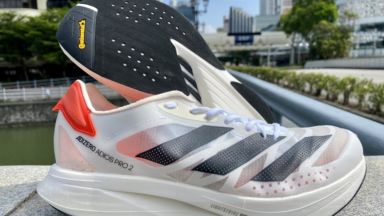 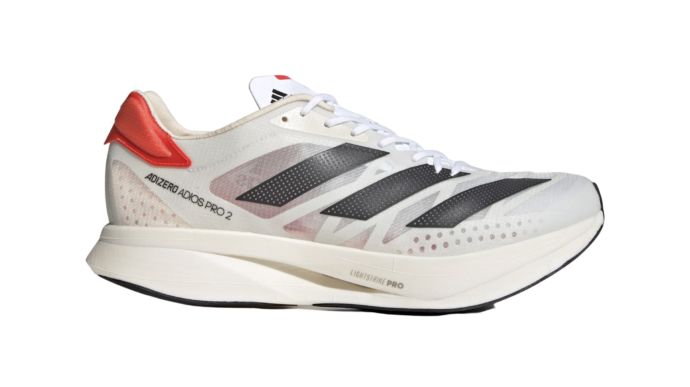 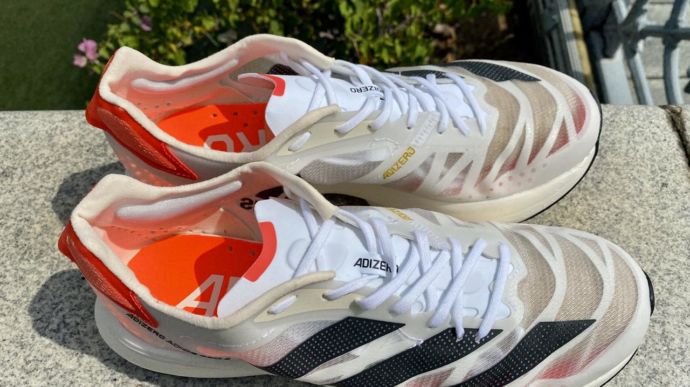 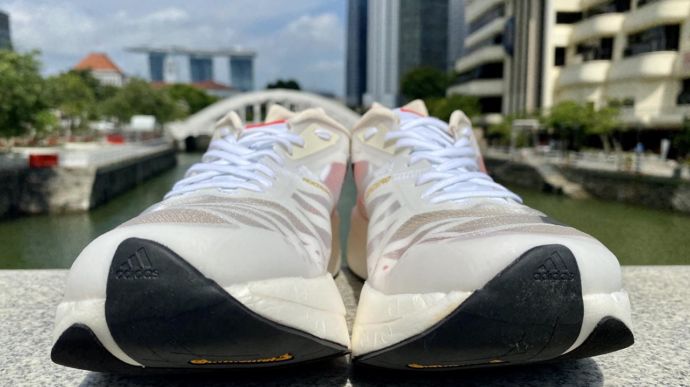 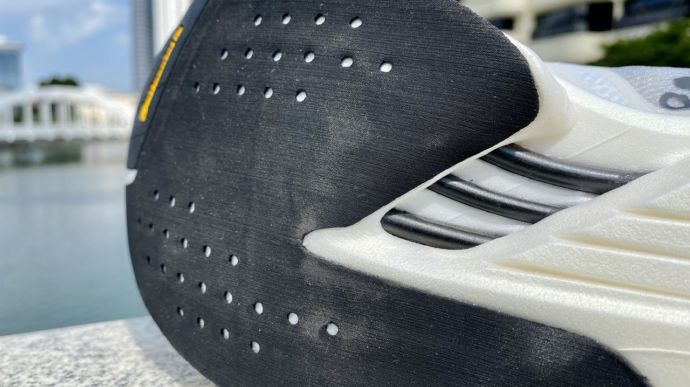 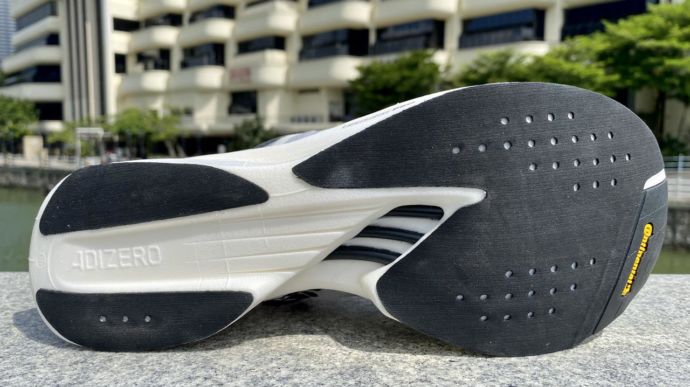 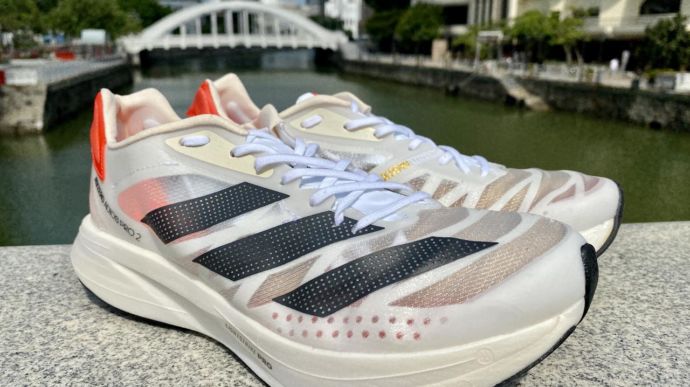 The Adidas Adizero Adios Pro 2 is a smooth-riding super shoe that relies on a rocker for speed. It doesn't have the most propulsion of all the super shoes but it feels more comfortable and energy-saving over long distances.

Version 2 of the Adios Pro has been updated with a more breathable upper and a chiselled midsole which brings down its weight but it still has a very similar ride to version 1.
WHERE TO BUY
LOWEST PRICE
$114
SHOE INFO
Adidas
Brand
Adizero Adios Pro 2
Model
Racing
Type
7.5 oz. (213 gr.)
Weight
220 US$
MSRP
10 mm
Heel Drop
Adizero Pro
Previous model
WHO IS IT FOR
If you're a runner looking for an elite racing shoe and you value long-distance comfort and energy-saving properties over propulsion, the Adios Pro 2 is the shoe for you.
Help me choose

It’s an early Saturday morning in August and I’ve just woken up at 5 am to witness Peres Jepchirchir win the gold medal in the Olympic marathon, wearing a pair of Adidas Adizero Adios Pro 2.

For a long, long time, the Nike Vaporfly was the king of super shoes and nothing even came close to matching its speed. Now, we’re at the point where other brands have finally closed the gap.

Adidas is one brand that has the R&D budget, the shoe developers and the resources to come up with a true Vaporfly competitor. It took them a while, but now they finally have something which gives their elite athletes a chance at a podium spot.

The Adios Pro 2 is such a unique carbon fibre racer because it utilises stiff carbon rods in its midsole instead of a rigid carbon plate like other racers.

This innovative design approach has paid off for Adidas because the Adios Pro 2 is one of the most lethal weapons in the super shoe war.

When I tested the Adios Pro last year, it quickly became my favourite super shoe: it was smooth, highly cushioned and had a natural ride which I hadn’t felt in any other racing shoe.

The Adios Pro 2 will set you back $20 more than its predecessor. So is the upgraded, more expensive Adios Pro 2 better than the first version and how does it stack up to the onslaught of new super shoes?

The Adios Pro 2, just like the Adios Pro 1 is extremely difficult to purchase because Adidas hasn’t managed to fix their supply issues.

When the Adios Pro 2 launched in Singapore, it was through the Adidas app in very limited quantities but even top tier, priority members such as myself never stood a chance: they were all sold out in seconds.

I eventually managed to secure a pair a few weeks later but most retail outlets have now sold out of the Adios Pro 2. The Vaporfly Next% 2 on the other hand is widely available.

The other shoes in the Adizero range, the Boston 10 and the Prime X run a half size big. I suspected the Adios Pro 2 to be the same, so I ordered it in a half size smaller than my usual size. This ended up being the perfect size.

I’m not a big fan of the Adios Pro 2 launch colourway.

All the white material makes the super shoe seem bland and on TV, you can’t tell if it’s the Adios Pro 2 that the elites are wearing because there isn’t enough distinguishable colour pop.

My first run was an 11 kilometre tempo run and the ride was very similar to the first version of the Adios Pro.

It was easy to get up to tempo pace and hold it there for the entire run. The ride felt very natural and smooth compared to other carbon fibre shoes with jarring rides.

I had tested the Adidas Prime X a month ago and the Adios Pro 2 felt like a more conservative, less extreme version of the Prime X.

Stability was better, the cushioning felt slightly firmer and the rocker wasn’t as aggressive.

That entire tempo run felt effortless and I was reminded why the Adios Pro was my favourite carbon fibre shoe of last year.

The Adios Pro 2 is a deceptively fast racing shoe. I use the word “deceptively” because it feels more conservative than other super shoes like the Vaporfly or Metaspeed Sky in that.

It doesn’t have as much raw propulsion but over the course of a run, the energy-saving properties come into play and increase your overall pace.

I used the Adios Pro 2 for all types of runs: long, slow, tempo, steady and intervals.

It could handle all of them with ease and I’ll even go as far as to say that the Adios Pro 2 is the most versatile carbon fibre super shoe out there.

Lightstrike Pro in the midsole isn’t the softest foam, nor is it the lightest or the most energy-returning foam but it’s a very complete super foam which can do everything moderately well.

The midsole now has a dual layer construction but it doesn’t make a big difference to the ride.

The Adios Pro 2 has a carbon plate in the heel as well as carbon energy rods in the midfoot/forefoot.

These two technologies provide stability and stiffness in the midsole rather than a springboard propulsion as in the Endorphin Pro and Vaporfly Next%.

To unleash the Adios Pro 2’s full potential, you do need to be going under 5 minutes per kilometre, and be leaning forward to engage the front of the rocker. That’s when the Adios Pro 2 sings.

I feel that the Adios Pro 2 is a great option for runners who want a super shoe that doesn’t feel like traditional super shoes which tend to have jarring rides. It’s easy and it’s pleasant to run in it.

A big difference between the first and second version is that the midfoot cutout makes the stability lower on the midfoot section, but the positive is that it makes the shoe feel more agile and nimble, leaner.

The Adios Pro 2 also has a higher toe-spring than the first version so its rocker is more aggressive and the forward rolling sensation in the Adios Pro 2 is more intense- it feels faster.

On the outsole, you get the regular, tough Continental rubber on the toe area but the majority of forefoot and rearfoot are protected by modified, thinner Continental.

This sandpaper-like material has fantastic grip but its ultra thin nature means that it wears down fast so the Adios Pro 2 is a race day shoe only.

The Prime X with thicker Continental outsole rubber is more ideal for training because it’s much more durable.

Just like the Boston 10 and the Prime X, the Adios Pro 2 has a cutout which allows you to see and feel its carbon Energyrods. This is my favourite design aesthetic of the shoe.

The upper of the Adios Pro 2 ticks all the essential boxes to make it a really effective racing upper: foot lockdown is secure, breathability is high and it’s lightweight.

It’s made of Celermesh 2.0 which is an improvement over the first version in that it’s slightly thinner and more porous so it lets in even more air.

The tongue of the Adios Pro 2 is flat, wide and sewn on both sides to the underside of the eyestay to prevent the annoying tongue slide that was present in the first version.

The unstructured heel has a lightly padded heel tab with rough inner collar pods that grip onto the sides of your ankle to make sure there is no heel slippage.

The toe box and midfoot are also spacious enough to make the upper comfortable to wear on runs which last longer than 4 hours.

The Adios Pro 2’s upper is one of the best racing uppers I’ve tested this year and its only fault is that it runs a half size too large.

Although the upgrades are minimal, Adidas has still managed to improve their flagship marathon racer. The Adios Pro 2 is lighter, cooler and feels faster because of its more aggressive rocker.

My favourite ride characteristics of the Adios Pro 2 are that it feels more comfortable and more natural than other super shoes with regular carbon plates.

The unique Energyrods setup in the midsole is a technological marvel and it makes the ride much more dynamic in feel.

The reason is simple, the Adios Pro 2 rides very similarly to its predecessor while other brands have shown more innovation and greater improvements this year.

Last year, the Adios Pro was my number 1 choice for racing a marathon in. Since then, other brands have caught up to Adidas (ASICS and New Balance in particular).

At $220, the Adios Pro 2 is cheaper than other flagship super shoes like the Vaporfly Next% 2, Metaspeed Sky and Hyperion Elite 2 so it still represents good value.

If there were more pairs of the Adios Pro 2 available for purchase, I’m sure it would be just as popular, if not more than the Vaporfly Next% 2.

Adidas really needs to get their act together because at this rate, next year this time we’ll still be complaining about the shortage of Adios Pros.

We purchased a pair of Adidas Adizero Adios Pro 2 from runningwarehouse using our own money. This did not influence the outcome of this review, written after running more than 50 miles in them.

Visit ShopAdidas
Sorry - Product not found. Please try RunningWarehouse.Com to check in their assortment.
This page contains affiliate links. As an Amazon Associate I earn from qualifying purchases.
WHERE TO BUY
LOWEST PRICE
$114
AVAILABLE ON SALE:Previous model $59