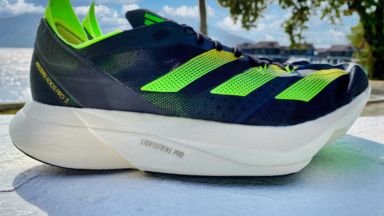 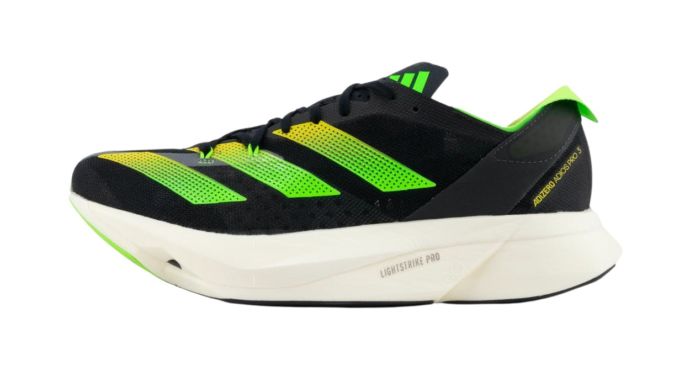 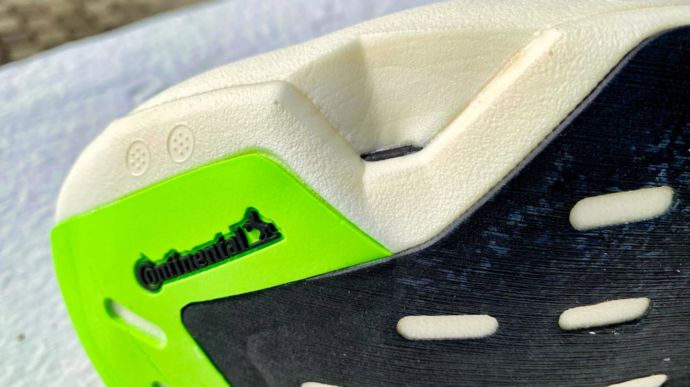 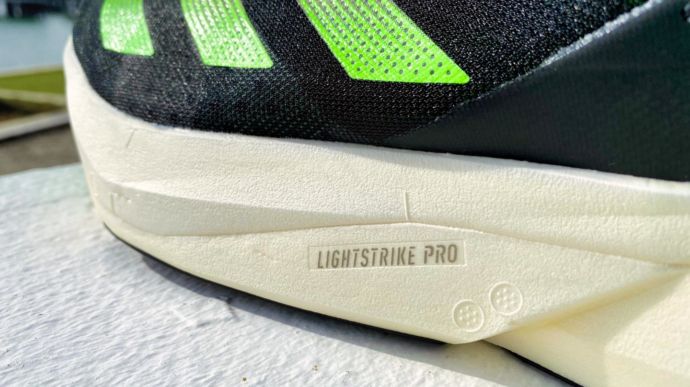 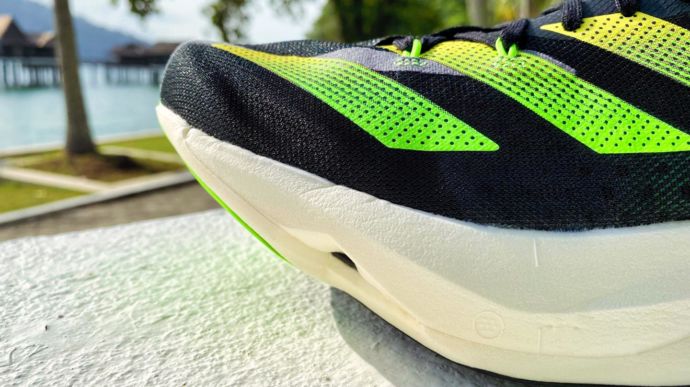 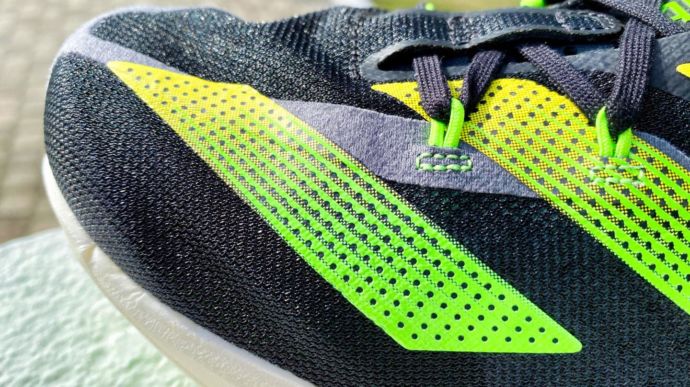 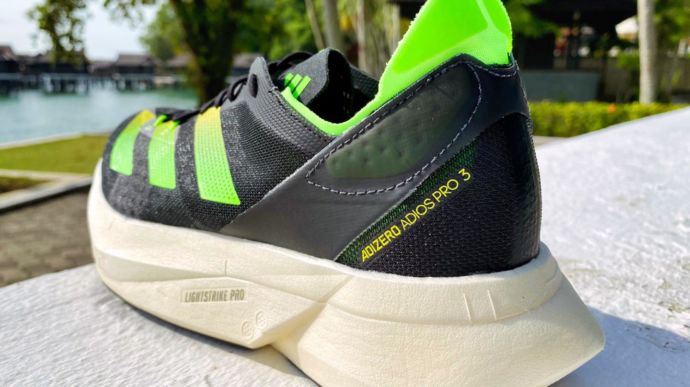 The Adidas Adizero Adios Pro 3 is a long-distance specialist. Its highly cushioned midsole and its efficient, energy saving ride make it perfect for marathons and beyond. Version 3 has more foam in the forefoot, a wider net base and a more aggressive toe-spring which makes it softer, more stable and more propulsive than the previous version.
WHERE TO BUY
LOWEST PRICE
$249
SHOE INFO
Adidas
Brand
Adizero Adios Pro 3
Model
Racing
Type
7.60 oz. (215 gr.)
Weight
250.00 US$
MSRP
39.5 mm
Heel
33 mm
Toe
6 mm
Heel Drop
WHO IS IT FOR
If you're a runner looking for a marathon super shoe with a forward-tipping sensation that's softer than most, the Adios Pro 3 is an excellent choice. It excels at long-distance runs and at target marathon pace.
Help me choose

“The Adizero Adios family of shoes received the most wins during 2021 World Major Marathon events.”

That’s the claim by Adidas on the product page of the Adios Pro 3. After many years of trying to catch up to Nike’s flagship racers, Adidas has finally managed to do it and even overtake Nike (in only World Major Marathon wins though).

The reason that they use the term “family of shoes” in the claim is because with the changes that they made to the Adios Pro 2, runners found it unstable and preferred to race in the first version. I’m a slight over pronator and I could definitely feel the instability when running in the Adios Pro 2.

The Adios Pro’s unique setup of carbon rods embedded inside a thick, super foam midsole has proven to be a winning combination. You have to applaud Adidas’ designers because their creativity and innovation have paid off.

Over the last 2 years, I’ve found the Adios Pro family to be very likable. Both racers have had the perfect balance between cushioning and responsiveness while having very natural transitions which don’t feel jarring.

The one thing that I wasn’t happy with was durability. I felt that I had to reserve them for special occasions because of how soft and thin the outsole rubber was. I put over 300 km on the original Adios Pro and I wore a hole right through the rubber on the lateral heel.

I also noticed that after 200 km, the outsole rubber started to lose its sandpaper finish and became smooth/slippery. It’s not a shoe that you can do a lot of training in.

The Adios Pro 3 has received a whole slew of updates including a new upper, midsole and outsole. It has picked up a little weight 2 g (0.07 oz) but it’s so little that you don’t feel it. The heel stack height remains 39.5 mm but the drop has decreased from 8.5 to 6.5 mm so there’s 2 mm extra stack height in the forefoot.

I always get excited about a new version when they change the upper, midsole, and outsole so I couldn’t wait for the Adios Pro 3 to come out. The thing that I was most excited about was the extra cushioning in the forefoot because I generally prefer a softer ride.

When I laced it up and walked around in it for the first time, I could feel the new, more aggressive toe-spring: it felt like I was stepping off of a ledge and the shoe was tipping me forward. This sensation wasn’t present in the last two versions.

My first run was an interval speed workout. The first thing that I noticed was how much softer the forefoot felt due to the extra cushioning while the heel felt softer because the heel plate was removed. During the warmup at a slow pace, the Adios Pro 3 also felt more stable than the first two versions.

My workout consisted of 600 m intervals followed by faster 200 m intervals. The Adios Pro 3 felt faster than the Adios Pro 1 and 2. The aggressive toe-spring made it easier to increase my cadence and I was really impressed with its wide range of speeds. It felt great at easy paces and during all-out sprinting. It didn’t need any break-in period and it was comfortable right out of the box.

The Adios Pro 3 feels faster than the last version which is the most important thing when it comes to a racing shoe update. The new midsole geometry makes it easier to increase turnover. The toe-springs of the predecessors were rounded but the toe-spring of the Adios Pro 3 is angled upwards at about 45 degrees which provides the forward-tipping sensation, the same that you get in the Vaporfly Next% 2.

This feels like you’re being helped forward as you transition from midfoot to forefoot. This sensation is most prominent when you’re going at moderate paces or faster, below 5 minutes per km.

ENERGYRODS 2.0 in the Adios Pro 3 is an evolution of the older system which combined a heel plate with ENERGYRODS that started in the midfoot and ended in the forefoot. The plate and the rods were not connected. ENERGYRODS 2.0 starts at the heel and stretches all the way to the end of the forefoot.

This setup creates more seamless transitions from heel to toe and it also makes the rearfoot and forefoot cushioning more consistent so the Adios Pro 3’s ride feels smoother than the previous versions.

I really enjoy the Adios Pro 3 on long runs. Cushioning feels bottomless and the efficiency from the midsole geometry is incredible. My legs always feel fresh after running in it.

The experience of running in the Adios Pro 3 is a unique one because the rods inside the midsole have the ability to move vertically and independently of one another. This gives the ride a more natural feel than carbon plated shoes.

There are now 2 layers of Lightstrike Pro foam which make up the midsole of the Adios Pro 3. The ENERGYRODS 2.0 are embedded in between the two layers. Both layers feel very similar in density and the ride feels like the midsole is made from a single chunk of foam.

Improved stability is my favourite new feature of the Adios Pro 3. Stability isn’t as good as in the Alphafly Next% 2 because it’s a lot softer but the flared base makes a big difference compared to the Adios Pro 2. Long distance runs are more comfortable and now you can corner and make U turns much quicker.

The outsole gets additional protection which makes it slightly more durable. There’s more rubber on the midfoot area and there’s an additional plastic plate on the medial side of the rear foot.

Most of the rubber on the outsole is still the thin, rough-textured kind so it’s still a shoe that you’ll want to use exclusively for races. You get the regular, thicker Continental rubber on the toe area of the outsole. Grip is great for the first couple hundred kilometres but as soon as it becomes smooth, the shoe loses a lot of traction.

The large medial midfoot cutout which exposes the ENERGYRODS is still present but it’s not as bothersome as before because of the wider rearfoot and forefoot.

Don’t wear your expensive socks with the Adios Pro 3. The scratchy insides of the upper pull at the sock material and ruin them after just one run. It feels comfortable while you’re running but as soon as you take it off, you can hear it, like velcro on your sock.

The fit of the Adios Pro 3 has improved at least. You had to go a half size down in the Pro 2 but the Pro 3 is true to size. The heel, midfoot and toe box are on the narrow side but the forefoot is spacious.

There is no heel counter but you do get cushioning pads on the inside of the heel which help to provide comfort and lock your heel in. The cushioning pads also have a rough texture which bites into your socks. Heel lockdown is good but not great and you can also use a runner’s knot which I used on every run.

The flat tongue is not gusseted so you have to make sure that it’s lying flat when you put the shoe on. When it’s on, there’s no tongue slide and you don’t feel the lacing pressure on the top of your foot despite how thin it is.

Overall, I found the upper comfortable, secure and breathable but it chewed up 2 pairs of my socks because of the rough insides which feel unfinished.

The Adios Pro 3 is a substantial upgrade over the Adios Pro 2. It’s not lighter but it has been improved in almost every other aspect: it’s softer, more cushioned, it feels faster and it’s more stable.

The Adios Pro 3 is the best super shoe I’ve tested this year and if I was going to run a marathon tomorrow, I’d pick the Adios Pro 3. It manages to balance comfort with speed and efficiency- it’s the perfect racing cruiser.

I think Adidas did a great job in making it suitable for more mid-pack runners while also making it a better racing shoe for elite runners. The extra stability makes it more suited to slower paces while the new, more aggressive toe-spring makes it feel more propulsive at fast paces. We should be seeing even more Adios Pros on the starting lines.

The only things I don’t like about the Adios Pro 3 are that it chews up socks and that it costs much more than its predecessors. It also doesn’t have great durability so you save it for races or key workouts only.

As editorial policy, we do not accept free samples from companies.
We purchased this pair of Adidas Adizero Adios Pro 3 at Running Warehouse with our own money.

Visit ShopAdidas
Sorry - Product not found. Please try RunningWarehouse.Com to check in their assortment.
This page contains affiliate links. As an Amazon Associate I earn from qualifying purchases.
WHERE TO BUY
LOWEST PRICE
$249