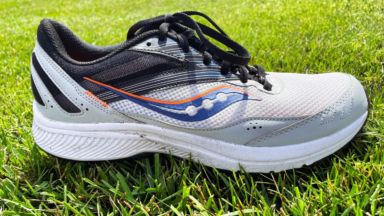 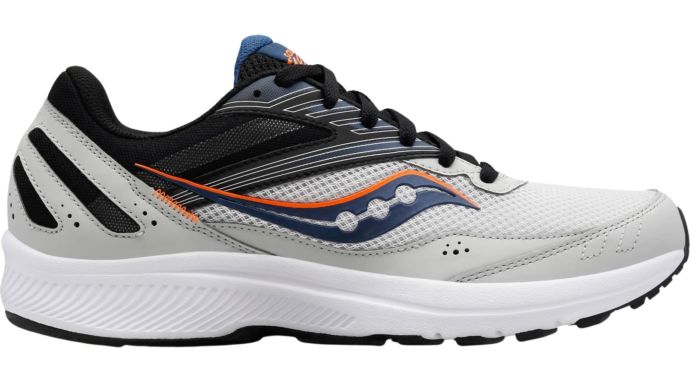 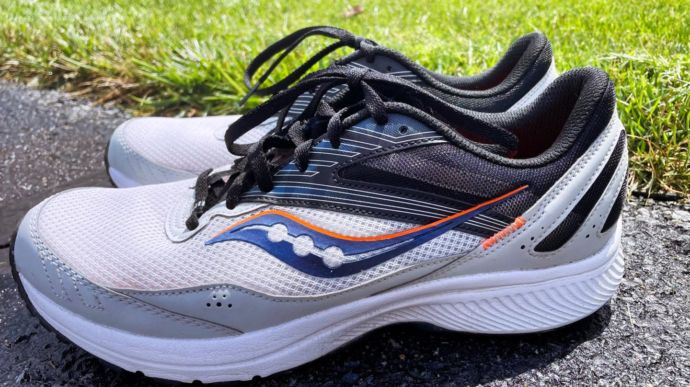 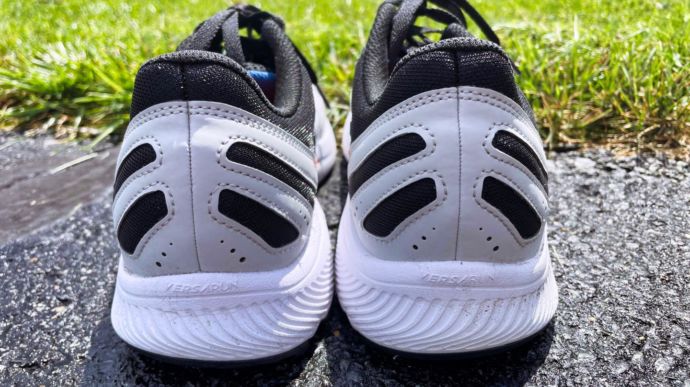 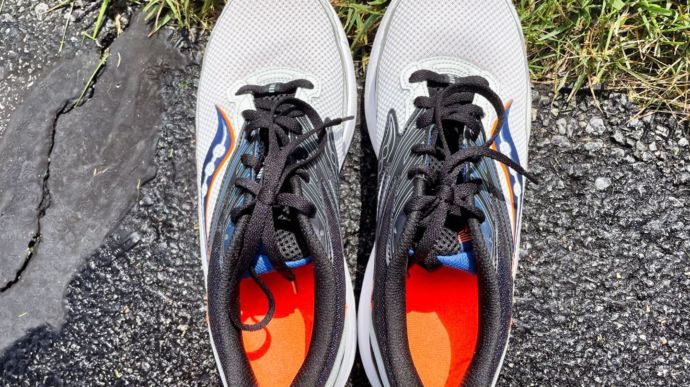 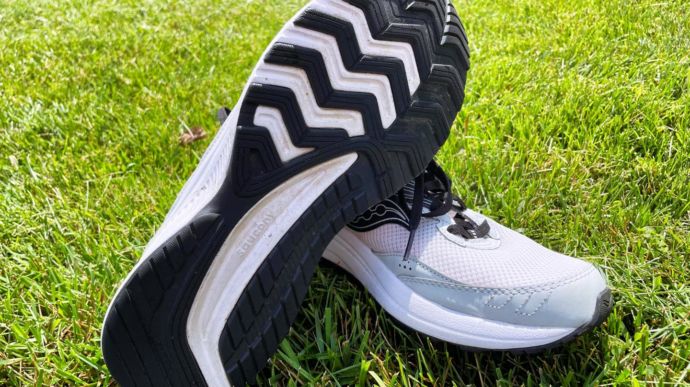 The Saucony Cohesion 15 has some serious "Dad Shoe" vibes. I was sent a boring grey color that has zero flash or flair. Pair that with a stiff, boring ride and I'd say this shoe has a very limited range of buyers.
WHERE TO BUY
LOWEST PRICE
$43
SHOE INFO
Saucony
Brand
Cohesion 15
Model
Cushioning
Type
9.10 oz. (258 gr.)
Weight
75.00 US$
MSRP
28 mm
Heel
16 mm
Toe
12 mm
Heel Drop
Cohesion 14
Previous model
WHO IS IT FOR
The Saucony Cohesion 15 is a budget friendly daily trainer. This shoe sits comfortably in the bucket of shoes for new runners or those looking to buy one shoe for the gym and running, without breaking the bank. Without much midsole cushioning and no pop at toe-off, this shoe fits any runner looking for a daily trainer to knock off some miles.
Help me choose

The Saucony Cohesion 15 is a far cry from any of the Endorphin series, Axon or Tempus.

Out of the box I already didn’t like it simply based on the style and colorway. As the saying goes, “look good, feel good” does not apply here. This shoe is as boring as they come. My young daughter likened them to “Dad Shoes” based on the no nonsense look.

This shoe is without any new tech. In fact, compared to any of the three Endorphin series shoes that I’m so fond of, this shoe has basically zero tech other than to have laces and a rubber outsole. That is to say, don’t purchase this shoe expecting any new midsole technology, a light or airy upper or a rocker for pop at toe off.

This shoe is a budget friendly daily trainer for anyone looking to buy a do-it-all shoe for the gym and road running. I will say, however, I was please with the initial step in feeling after reviewing another budget friendly shoe, the Nike Quest 4.

Coming in under $100, there isn’t a lot to this shoe but that might be fine for someone who is unaware of what new technology exists in running shoes or those who don’t feel they need that.

After my initial disappointment in the color and style, I was surprised with the first step in feel. The upper is soft and with plenty of cushioning in the tongue and around the ankle, it felt more comfortable than the last budget friendly shoe I tested, the Nike Quest 4.

My first run confirmed some of what I felt slipping the shoe on. After being disappointed with the lack of cushion in the Quest 4, I was pleased to feel at least some in this shoe. I immediately felt this shoe could be a solid daily trainer and gym shoe for the person looking for one pair of shoes at a wallet friendly price.

The laces seem too long to me, but I had to tighten them down pretty hard to get the secure fit that I like. Fortunately, the tongue is very padded. I never felt any rubbing or experienced any hotspots from the laces.

I noticed more cushioning in the midsole in the Cohesion 15 than Quest 4. Don’t take this to mean the shoes are cushioned daily trainers, I’d say the opposite in fact. But compared to another shoe in the class of affordable do-it-alls, this has more padding everywhere I wanted it.

I’ve mentioned cushioning, or lack thereof, a few times already so I won’t mention that again. The sole unit is wide and stable. I never once felt turning or tight cornering was an issue. I admittedly never got this shoe up to a fast pace but the wide base always felt stable and in control.

Traction is no issue with the Cohesion 15. There is plenty of it. I ran these shoes on dry pavement, in the rain and over loose gravel and always felt under control. Never did I notice slipping of any kind.

The midsole is firm and without any of the new tech from Saucony, there is no pop off. In fact, after several consecutive days of running in these shoes I started to notice some slight shin pain. There is no shock absorption with either the firm midsole or very stiff and heavy rubber outsole.

That same heavy rubber outsole is solid though. It is built to last seemingly forever. After running on various forms of pavement and loose gravel, there is still very little visible wear in the outsole. I think this shoe will last for several hundred miles and still look great.

The shoe has a removable sock liner that I never noticed until my last run. It happened to be in the rain and with an upper that holds water (you’ll read about this) the sock liner shifted with the amount of water in the shoe. I didn’t notice while running other than my toes touching what I thought was the end of the shoe. When I took the shoes off after I saw that the liner had shifted and for long enough that the shape changed. I could never get it to sit back into place correctly. My toes always hung off the ends after that so I knew it was time to shelf them.

The upper itself is heavy and warm. Again, I tested this shoe in the summer heat. That was easily noticeable in the not very breathable upper. I couldn’t take this shoe much longer than 4 miles anyway and I’m happy for that. My feet were on fire after every run from lack of air movement at all.

To add to that, the heavy upper held water. I ran in the ran once, not by choice by the way. A lack of holes of any kind means that once water enters the shoe, there isn’t anywhere for it to escape.

I started out feeling the shoe was ok and had a place in the budget shoe market. It is more comfortable as a daily trainer than the Quest 4 but still a very boring and uninspiring ride. Combined with the “Dad Shoe” look, I was happy that I run in the early morning hours.

I thought this could be a shoe that I recommend for someone looking for one shoe for gym and running without breaking the bank but after my sock liner incident, I can’t. Not being able to get the liner to form back into the shoe means I would have to return it if I wasn’t testing them.

Like the Quest 4, I think this shoe fits a niche market but right now there are so many good shoes in a series with the latest versions coming out that I would buy any one of those over these.

For example, one can find the Saucony Speed v1 or v2, Asics Novablast or many in the Hoka lineup at similar price. You will get new technology with any of those in the way of better midsole foam or a nylon plate, spend the few extra dollars on those and not these.

As editorial policy, we do not accept free samples from companies.
We purchased this pair of Saucony Cohesion 15 at Running Warehouse with our own money.

Visit ShopAmazon.com
This page contains affiliate links. As an Amazon Associate I earn from qualifying purchases.
WHERE TO BUY
LOWEST PRICE
$43
AVAILABLE ON SALE:Previous model $14

Elliott Dowling lives with his wife and two children (9 & 7) in southeastern Pennsylvania. He is a road runner, focused mostly on the marathon distance. Elliott has ran 3 marathons with a PB of 3:10:50. His goal is BQ, and currently he stand 50 seconds off that goal. He has an active family, his wife is a marathoner and triathlete and 9 year old son has ran several 5ks.