Brooks is moving away from using degrees of stability as the key differentiation for models in their range. Other brands are moving in this direction, with Nike being the largest example at this time.

"Run Happy" is Brooks motto and their running shoe philosophy is that there is no right or wrong way to run. That a running shoe is not intrinsically right or wrong for you, but that each runner should choose the shoe they want based on their individual preference and the experience they want to get out of a run.

They therefore split their running shoe collection into 4 "silos" that reflect 4 different kind of runs (Brooks calls them "experiences"):

Don't let the name "Cushion" fool you into thinking these are Brooks neutral shoes. The Beast and the Adrenaline - two of Brooks most popular stability running shoes - sit in this category.

Cushion is about the feel the shoe has during the run. The emphasis is on delivering a soft landing of the foot to protect each step.

Here are the shoes that make up this category, and for clarity I will explain which ones are in the traditional "neutral" or "stability" class.

Check it on Amazon
The Ghost is the most popular neutral shoe from Brooks. It provides soft but responsive cushioning and it's one of the most versatile shoes in their lineup. Read full review »

Check it on Amazon
The Adrenaline is the support/stability counterpart of the Ghost. As such, it is a shoe that fits a wide variety of runners and it's a great every day running shoe. Read full review »

Check it on Amazon
The Glycerin is the premium neutral option from Brooks. It fits and rides similar to the Ghost, but it has more cushioning and more premium materials used in the upper. We recommend it especially for heavier runners. Read full review »

Check it on Amazon
The Revel is a lower-priced neutral option. It is meant for the more casual runner that wants a shoe that is meant for running, but can also be worn casually or for other workouts.

Check it on Amazon
As the name suggests, the "Beast" is a monster of stability. Originally one of Brooks' most successful shoes, it provides an incredible amount of support for the runners that need it the most, especially flat footed ones.

Check it on Amazon
The Ariel is the female version of the Beast, with a similar function but engineered specifically for the woman's body.

"Energize" shoes are characterized by a more responsive cushioning and higher energy return compared to the "cushion" shoes.

They place an emphasis on speed and fast foot turnaround and are generally more lightweight than their counterparts in the "cushion" category. They are meant for faster training or racing.

Check it on Amazon
Do you like the Ghost and are looking for a lighter version, with a lower drop and more responsive cushioning? The Launch is the shoe for you Read full review »

Check it on Amazon
The Ravenna is the stability counterpart of the Launch: if you like the Adrenaline but are looking for a faster, lighter version for speedwork or race day, look no further than the Ravenna! Read full review »

Check it on Amazon
The Levitate uses a new foam compound from Brooks in order to deliver the same soft cushioning as the Ghost, but with more responsiveness for faster efforts. Unfortunately many runners are turned off by the higher weight. Read full review »

Check it on Amazon
The Ricochet uses the new DNA AMP foam from Brooks and a very nice knitted upper. Read full review »

Check it on Amazon
The Brooks Bedlam has ingredients to make it a leader in the stability shoe game. Sadly, it falls short due to how heavy it is; making the experience underwhelming. Read full review »

Look into these shoes if you are looking for a natural feeling or to perfect your running technique.

Check it on Amazon
The Brooks PureCadence 7’s fantastic sole unit and decent upper prepare this lightweight, low-drop shoe to support you over many miles, all for a great price.

This version has (just) a touch more room in the width, but going up a half size is still recommended for the length. Read full review »

Check it on Amazon
The Brooks PureFlow 7 are a lightweight trainer that can log miles. At a very reasonable price, this could be a go-to shoe for experienced runners. Read full review »

As the name suggests, "Speed" are the racing shoes. Here are the options:

Check Latest Price
The Brooks Asteria is a formidable race shoe that has it all. Light, responsive, supportive and a great price to boot! Read full review »

Check Latest Price
The Brooks Hyperion is a very lightweight racing flat that is stripped down to the bare essentials to give you maximum speed with moderate durability for fast workouts and important races. Read full review »

Check it on Amazon
The Brooks Neuro 2 is a welcome redesign for those who were disappointed in the original version. The shoe is comfortable and sturdy but lacks excitement. Read full review »

Launched in 2008, BioMoGo is the material found in virtually all Brooks midsoles. Due to its formulation, BioMoGo is completely bio-degradable. While a standard EVA foam will take approximately 1,000 years to fully degrade in a landfill, BioMoGo can biodegrade in roughly 20 years when placed in the same environment.

What makes this technology incredible to me is that Brooks decided not to patent it, but to offer it as a “open source” innovation for any other shoe producer to use. Way to go!

Launched in 2010, DNA is a cushioning technology that is also present in most of Brooks’ running shoes.

Brooks claims that DNA is the first cushioning technology that dynamically adapts with each foot strike to the ever-changing amount of force placed on the foot during the run. No matter what the age, weight, gender, gait… DNA adapts itself to deliver the right amount of cushioning.

How’s that possible? DNA is a non-Newtonian compound.

Isaac Newton is the 17th century English scientists that brought to us the laws of motion, universal gravitation and coincidentally is the name of a competing running shoe company.

A non-Newtonian material is a material that behaves very differently from what we expect, based on the impact applied to it. Although it sounds crazy at first, it is a real thing! Please watch the video below. It’s from Brooks, it’s quite cheesy, but the demonstration give it justice more than I could by writing about it.

Super-DNA is the latest version of DNA and we can expect in the near future most of Brooks’ running shoes to be featuring this new compound. Still based on the same principle of the DNA, a non-newtonian based material offers different amount of cushioning based on the force of the impact applied.

This new version adds 25% cushioning to the previous BioMoGo DNA material while preserving all the other specs, including the bio-degradability. 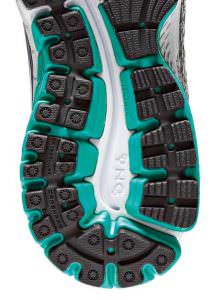 Shaped like a caterpillar, the Segmented Crash Pad is a midsole made up of independent, yet fully integrated shock absorbers.

As your foot strikes the ground, the segments work together to customize your individual lay down to provide the right amount of cushion and seamless heel-to-toe transition for you – making the most of all that effort you put into each stride.

Guide Rails are the latest introduction in Brooks technology and like all the others, it seems to veer in the direction of “we don’t correct your stride, we let your body define how to run”. This latest is about providing some stability without traditional stability technology (ie. dual posts).

Guide Rails are specialized plates built into the midsole that allow your hips, knees and joints to move along their unique motion path while you run – all without any traditional posts. What they do is to wrap around the edge of your foot in order to keep it aligned. The illustration below, from the Brooks website, might help clarify what they are. 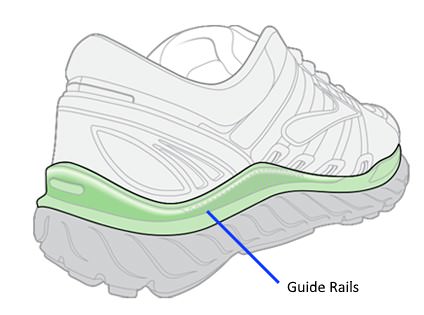