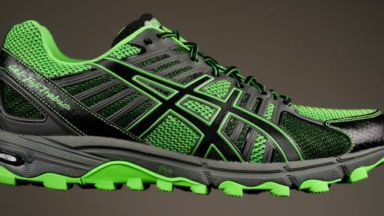 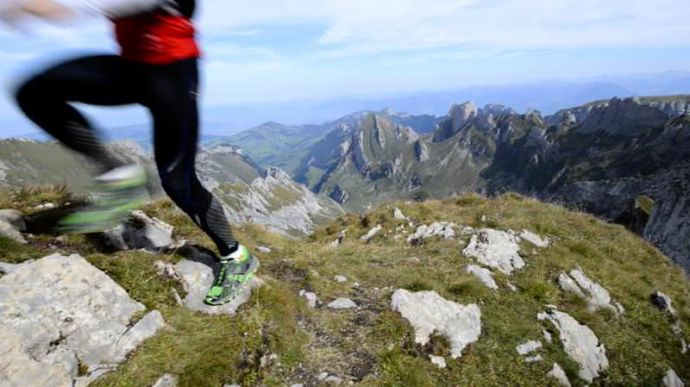 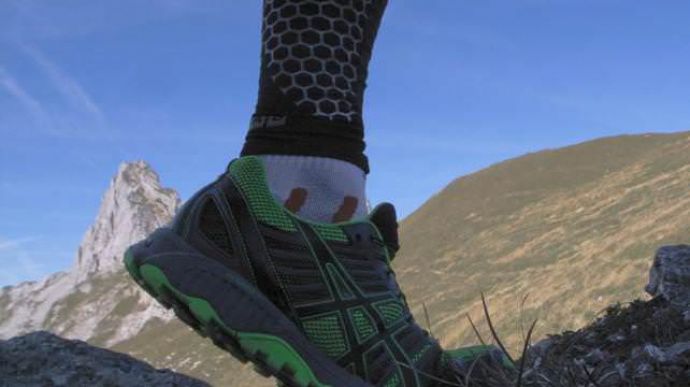 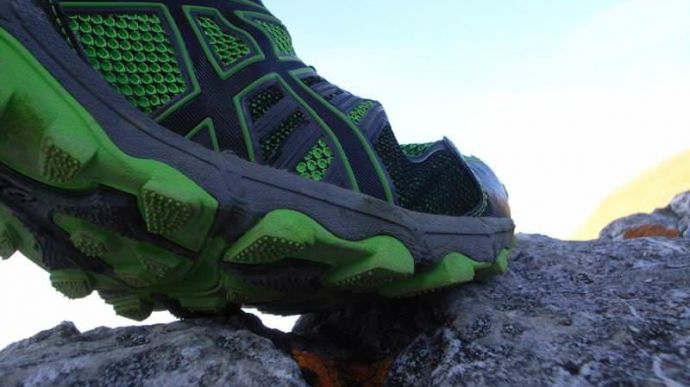 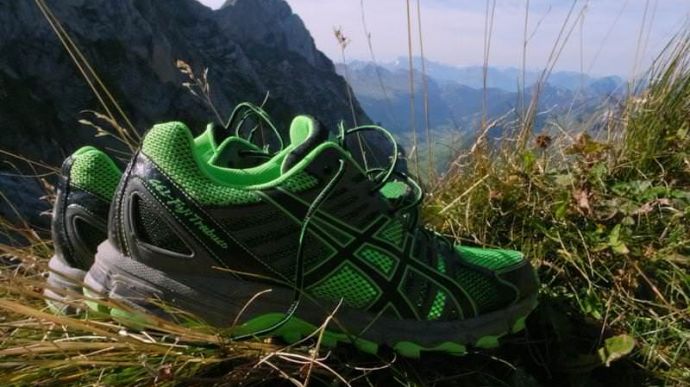 A highly cushioned trail shoe for non-technical trail runners.
WHERE TO BUY
LOWEST PRICE
$79
SHOE INFO
Asics
Brand
Fuji Trabuco
Model
Trail
Type
12.38 oz. (351 gr.)
Weight
180 US$
MSRP
WHO IS IT FOR
Mid to over pronation runners.
Help me choose

The Asics Fuji Trabuco is the most robust of the Asics Fuji trail running line. It has plastic stabilizers running over the uppers to hold the foot secure and a rigid plastic heel cup and the treads are more aggressive than the Fuji Trainer or Racer (the previous shoes I’ve tested in this shoe line).

The Trabuco design intent is obviously more robust than that of the Trainer or Racer, and for that reason I tested the Trabuco on more serious trails, specifically the high alpine region of Mt. Santis in Switzerland.

Any modern shoe will do ok on normal trails, but if the shoe is big and robust, then it’s obviously meant to be taken on more serious terrain. On Santis I ran mainly between the Rotsteinpass and the summit, with the elevation varying between 2000m-2400m above sea level. The trails in this area include grass, small rocks, big rocks, and snow except in high summer. This tests the lateral stability of a trail shoe and also the agility and grip over different surfaces. If a shoe does well in this area, you can count on it in any reasonable alpine adventure of your choosing.

The Trabuco is an interesting trail running shoe. The uppers include plastic ribs to stiffen the foot, while the sole is very well cushioned for a shoe of this type. In the high mountains I mainly run on the Salomon S-Lab 4, which is a standard for races in the alps. With the S-Lab you have a highly cushioned heel and large heel-toe drop paired with a less cushioned forefoot. This gives you good agility on technical trails and gives heel support when descending and making heel contact with the ground.

The Trabuco has a cushioned heel and forefoot and this combination should lead to better comfort over a long run, protecting both the forefoot and heel from hard impacts on the ground. I like this as long runs in the S-Lab generally make my toe nails fall off. The Trabuco treads are relatively soft for a mountain shoe, although aggressive in nature, the rubber used deforms easily (as compared with shoes like the Inov8 RocLite 285 or Salomon S-Lab 4). So let’s look at the design features more closely.

The uppers are composed of dense mesh overlayed with plastic stiffening ribs. This secures the heel and creates tension between the heel and the top of the foot. Additional ribs at the side of the forefoot give stability in that region as well. On first glance this looks like you will have efficient transfer of forces from the sole to your foot, which is key in ensuring agility on mountain trails and balancing on rock edges.

However, the primary problem is the use of plastic stiffeners over the uppers to stabilize the foot. The issue here is that a very stiff material (rigid plastic) wraps around your foot while the rest of the upper is a combination of breathable and structural mesh. When your foot slides inside the shoe the stress is taken up by the plastic stiffeners, which causes stress points on your outer foot (hot spots).

Since the material is a stiff plastic, it won’t really break in at all over the lifetime of the shoe. So if it fits you perfectly…well, good – but for most people it’s best to have a shoe that conforms to your foot as your foot flexes. That’s the design intent of a shoe like the Salomon S-Lab 4, it has a stiff sole and structurally stiff uppers, but those uppers stretch and conform to your foot when you slide forward in the shoe. The upper fabric should stretch a little so it forms over the surface of your foot, and in that way the stress on your foot is as minimal as possible.

With the Trabuco I had sore upper feet where the plastic was biting into my outer foot bones after a day of running, and I was happy to take them off after the sun set over the alps. Now, even if you have stiff uppers on a shoe, this doesn’t mean much unless the sole is designed to match that stiffness and give stability to sole.

I had high hopes for the Trabuco, the plastic stabilizers looked ideal for keeping my foot stable on wet rocks as well as on grassy trails. This is important on mountain runs where you start in a valley, head up over a pass, and descend down to another valley. The sole is very comfortable and cushioned, deforming easily while running. Actually, the DuoMax sole is most comfortable shoe I’ve ever used beside the On Cloudsurfer (which uses rubber ring deformation to take up impact energy). The Trabuco uses a rubber for the treads which is very similar to the rubber used on the Fuji Trainer and Racer shoes. However, the treads are longer and designed to dig into the ground. So, basically you have stiff uppers mixed with a soft sole and tread design.

In my view, this was a poor design philosophy, and Asics should have gone with a stiffer, more durable rubber for the sole that would offer some bite. Why? Because even though the treads of the Trabuco look rather aggressive, they are made of a soft rubber. So, when you run along trails and in the mountains, those aggressive-looking treads bend and deform easily over the terrain. This reduces forces felt by your feet, but this also reduces their effectiveness in biting into the ground or supporting your foot placement on rocks. The result is a shoe which feels cushioned on the sole, but doesn’t give you the control you would expect given the size of the tread lugs.

If you compare the Trabuco treads with a shoe like the Inov8 RocLite 285, you will immediately feel how much stiffer the treads on the RocLite sole are. This design trend of using soft rubber on the treads can be understood on a light-weight race shoe like the Fuji Racer, but on a beefy shoe like the Trabuco, I expect a stiffer sole material to improve performance on mountain trails. Otherwise, there’s no real justification to the increase in weight of the shoe because the agility of the shoe suffers (the Trabuco weighs about 100g more than the Racer).

For me, agility means the ability to confidently move quickly over a trail, making fast directional changes while running. I could move fast up and down the alpine trails with the Trabuco, but I didn’t feel overly confident while doing so. In particular, I was a little worried about slipping while jumping off of larger rocks, knowing that the treads were deforming and bending a lot, so I was focused on making good contact to avoid possible slipping. On large wet rocks with snow I was slipping a bit while hiking along the ridge. At this point I should mention that most people negotiate these ridges in mountaineering boots, so it’s safe to say I was pushing the shoes to their design limits. In all I was moderately satisfied with the agility of Trabuco on the high alpine trails in perfect conditions, but they are not as good as the Salomon S-Lab 4, the shoe I would normally take along on a Swiss mountain ridge.

Overall the Trabuco is a respectable trail running/mountain shoe from Asics, but I feel that there was not enough design attention paid to the tread rubber and the plastic stiffeners on the uppers to justify the increase in weight of the shoe. I would prefer to have a stiffer rubber on the sole to give more strength to the aggressive treads, and use a high tensile strength fiber for the ribs on the uppers to increase torsional rigidity of the shoe while at the same time not introducing hot spot on the bones of the upper foot due to the biting plastic ribs. Still, I had a fine time running around Mt. Santis with the Trabucos.

We thank the nice people at Asics for sending us a pair of Fuji Trabuco to test. This did not influence the outcome of the review, written after running more than 50 miles in them.

Visit ShopZappos
Sorry - Product not found. Please try RunningWarehouse.Com to check in their assortment.
This page contains affiliate links. As an Amazon Associate I earn from qualifying purchases.
WHERE TO BUY
LOWEST PRICE
$79