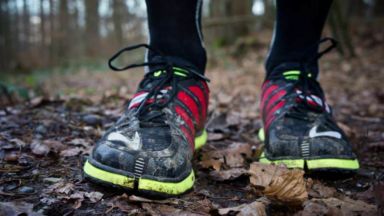 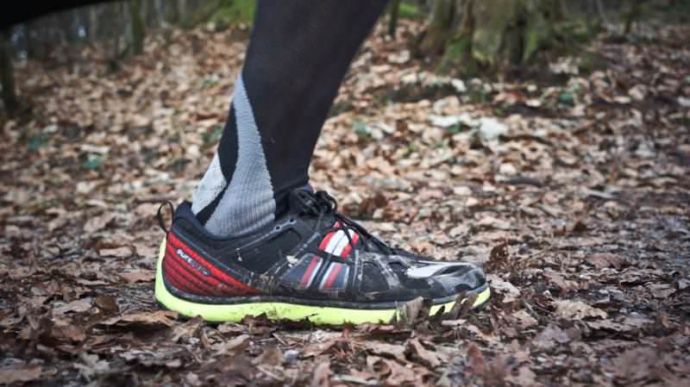 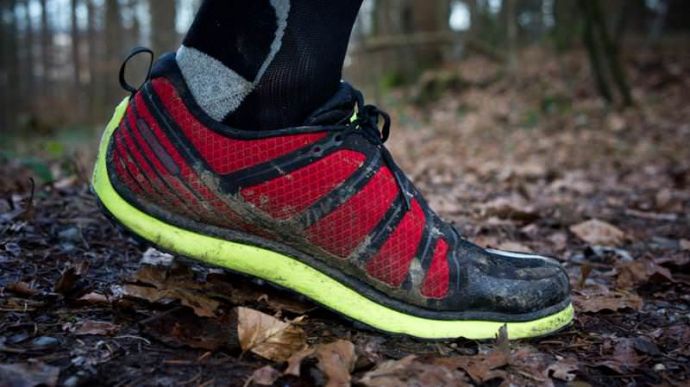 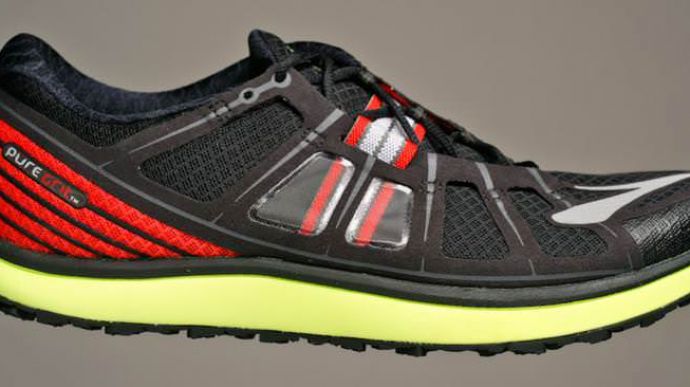 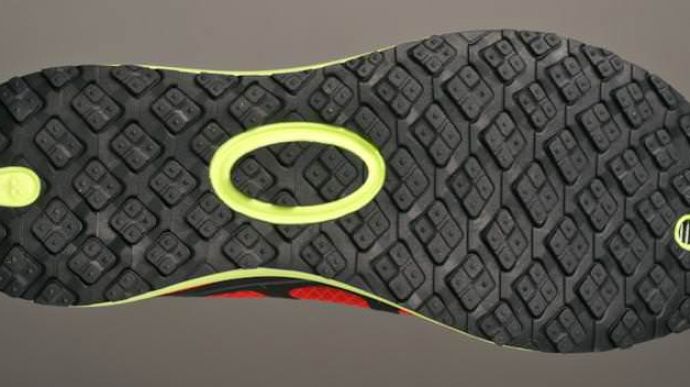 The Brooks Pure Grit 2 is one of the best trail running shoes I have ever tried.
WHERE TO BUY
LOWEST PRICE
$110
SHOE INFO
Brooks
Brand
Pure Grit 2
Model
Trail
Type
9.98 oz. (283 gr.)
Weight
110 US$
MSRP
WHO IS IT FOR
Neutral runners, pronantion control
Help me choose

Probably the first thing you notice about the Brooks Pure Grit 2 is that it looks a lot like a Ninja or Samurai boot.

The split toe design in the front gives the impression of historic Japanese footwear but you need not purchase socks with separate toes. Still, when dressed up in black compression tights and while running along forest trails, I envision myself as a new-age techno Ninja silently negotiating the shadows in the foothills of Mt. Fuji.

Ninja fantasy aside, the Pure Grit 2 is the best trail running shoe I’ve had the pleasure of running on (as of this writing). That’s not supposed to be a loaded statement, but is simply a fact. This statement is due primarily to the excellent fit, design and materials, which has resulted in a shoe that works very well with my biomechanics and is a joy to run long distances in. First let’s talk about why proper fit is so important.

I’ve run on a number of different shoes over the past two years, including many variations of trail running shoes covering the gambit of high/low heel-toe drop, aggressive versus moderate soles, and good to amazing fit. I run on everything from road sections to forest trails, alpine routes over ridges and the occasional snow ascents. The number one feature of a well-designed shoe is the fit.

Without proper fit, your foot won’t conform well to sole, and without that your foot will slide around, compressing against the uppers where hot spot or stress points will develop, and over the course of a long run, discomfort can lead to everything from blisters to toe nail damage. In more extreme cases, choosing a shoe which doesn’t support your feet correctly could also lead to back problems by disrupting your natural posture.

The Brooks Pure Grit 2, through a combination of footbed design, sole profile, and asymmetrical uppers design gives me an optimal fit. This in turn makes running more comfortable (and enjoyable) because my running gait on the trail is very natural.

The uppers are very well constructed, composed primarily of dense mesh, with laminated rib material which bends easily but has a nice tensile stiffness. I was impressed when I reviewed the Brooks Cascadia 8, and noted that the asymmetrical design of the uppers was what really differentiated the shoe from other designs.

The uppers design of the Pure Grit 2 takes the asymmetrical fit to the next level (in my opinion). When you pull on the shoes there is an elastic band which holds the tongue in place over your upper foot. This Nav Band is designed to wrap over the instep and keep the foot in place while running and the elastic Nav Band is designed to conform to individual foot shapes.

The uppers also have a very non-linear pattern along the tongue. This isn’t just for aesthetics, essentially the uppers create a lot of contact with the top surface of your foot. This means forces from the uppers are evenly distributed over your foot, and this helps hold your foot correctly in place over the footbed of the shoe, which is one of the primary reasons why the Pure Grit is such a good design. This makes the shoe feel more like a comfortable slipper than a running shoe.

The anatomical footbed combined with the close fit of the uppers means that your foot is really held in place in the middle part of the shoe. This is ideal because when you change direction on the trail or your toe bumps into a rock, your foot stays in the correct position and doesn’t slide around (as I have experienced in most other shoe designs).

As I discussed previously in the Cascadia 8 review, most shoes have a straight uppers design, and don’t maximize the contact area over your foot, leading to stress points and uneven flexing of the uppers as your run and your foot changes shape. With a straight uppers design, as you tighten the laces to give a closer fit, you will experience pressure points on the top of your foot where reaction forces concentrate.

This is because the uppers aren’t shaped to the contours of your foot. With the asymmetrical uppers design, he Pure Grit 2 really conforms to my foot shape and biomechanics, something which really can’t be under-scored enough. Still, the uppers are only part of the design, you need a good sole as well.

The midsole is composed with the Brooks BioMoGo DNA technology, I’m not going to pretend like I know where that name came from, but I do know that the midsole and footbed of the Pure Grit are some of the best I have experienced in a running shoe. When I first put on the Pure Grit 2 shoes I felt a lot of support in my arch region, and at first I was worried they had an extreme design which would be uncomfortable.

However, the DNA smart cushioning is designed to create a springy return and reduce energy waste while running. Once I started running, I found the footbed accommodated to the form of my foot extremely well (as can be seen in the pictures). This concept of springy energy return is a similar design intent to the On running shoes, where rubber rings are used to absorb and return energy while running.

However, I’ve put many kilometers on both shoes, and I’ll take the Pure Grit over the On Cloudsurfer (or racer) without a second thought now.

The heel design also requires a mention here. Called the Ideal Heel, it is designed to promote a natural stride by landing in a more forward position while running by aligning the center of gravity of the runner and encouraging proper energy return.

I often switch between heel and forefoot strike running techniques on the trail, but I can affirm from many kilometers that I feel my stride is more fluid with the Pure Grit than with other shoes.

The most unique visual feature of the Pure Grit 2 is the Toe Flex, or the Ninja toe style as I like to call it. Basically the toe box is split, allowing the area of the big toe to flex with some independence from the other toes. I think this features is what gives the Pure Grit a playfulness that I haven’t experienced with other shoes. I feel more like I’m dancing along the trail. This isn’t as extreme as the Five Fingers shoes where all your toes can flex indecently, but the result is that your big toe can contribute more to your balance, just as it does when you walk around barefoot. I find this design to be a very nice balance between the need to have a running shoe to support your foot on the trail, and building in flexibility to allow your toes work as they were designed for (walking around without shoes).

The Pure Grit 2 has a slightly concave sole profile and is covered by a continuous array of rectangular shaped lugs. This concave profile is one of reasons why the shoe feels so good. Over different surfaces it accommodates very well to my natural stride and the terrain, without stress points occurring due to stiff treads generating concentration points on the bottom of my feet. As you apply pressure to the ground the concave shape of the sole will flex and spread (or flatten) out as your foot impacts on the trail and creates a larger surface area than a flat sole. This results in good contact with the ground. Overall this works very well on the trails giving me a gliding feeling as I run through forests, but there are limitations to this design when conditions become muddy and wet.

Although the Pure Grit 2 is the best trail shoe I’ve ever run on, it’s not perfect. The sole of the Pure Grit 2 is essentially flat on the bottom (or slightly concave), which works very well by accommodating to changes in trail topography and there are some nice grooves which help maintain contact and friction over large rocks.

The Toe Flex design allows for very nice agility on the trail, and I feel very confident moving fast. However, there are no deep treads to bite into the trail. This makes it very difficult to ascend up muddy slopes, and makes it easy to slip on wet leaves or on fallen wet tree trunks of if you’re not paying attention.

I would like to see some deeper treads added to the sole and maintain the awesome fit and biomechanics performance of the shoe design while improving wet trail performance. The Brooks Cascadia 8 has a descent trail tread design without being overly aggressive, and I’m sure a variant of this design could be added to the next Pure Grit shoe. This would likely add some weight to the shoe, but would also add a lot of good trail functionality.

Perfect fit, currently my favorite trail running shoe, but I would like to have more traction on soft ground. That about sums it up. The Brooks Pure Grit 2 is a light, minimalist shoe that wraps around my foot like no other.

The split toe design isn’t just a marketing gimmick and gives good agility while the heel and sole design allow for a natural, comfortable running stride over different trail types. I wish there were some more aggressive treads (similar to the Brooks Cascadia 8), to give better performance in wet conditions, but overall the Pure Grit 2 is now my favorite trail running shoe.

We thank the nice people at Brooks for sending us a pair of Pure Grit 2 to test. This did not influence the outcome of the review, written after running more than 50 miles in them.