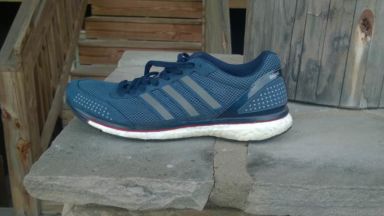 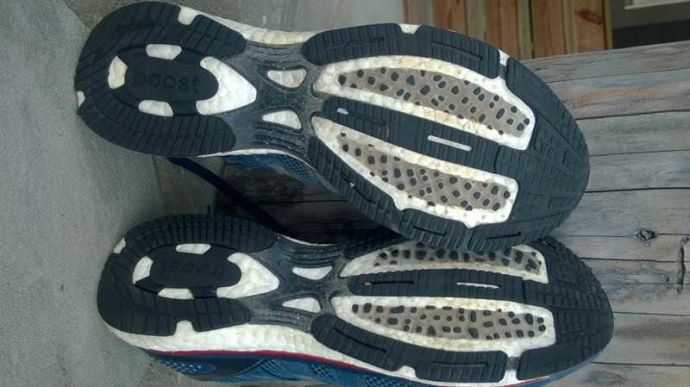 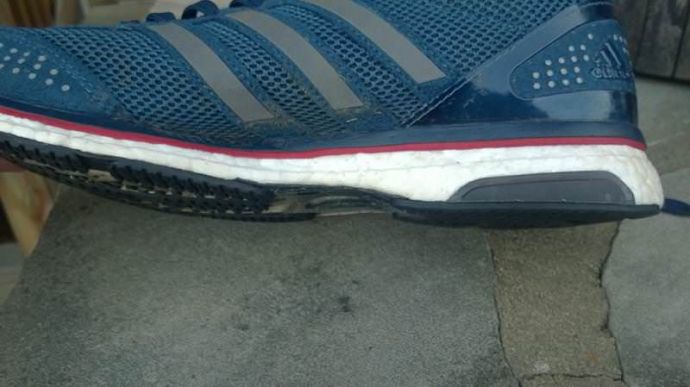 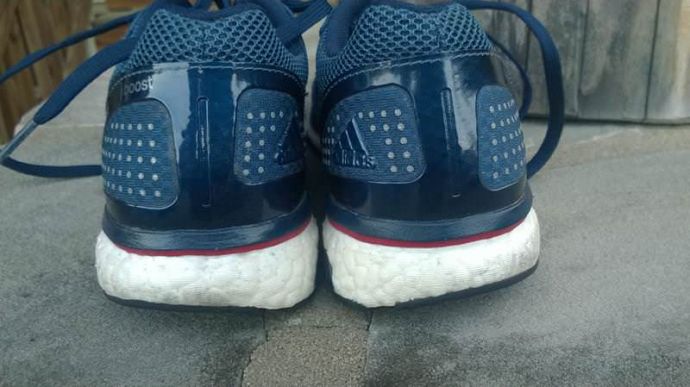 While not as light as many traditional racing shoes, the shoe’s responsiveness off the ground makes it feel faster than other shoes of the same weight. The Adidas Adios Boost is rather expensive, which will put many runners at odds with the package as a whole when compared to other similar options.
WHERE TO BUY
LOWEST PRICE
$140
SHOE INFO
Adidas
Brand
Adizero Adios Boost 2
Model
Racing
Type
8. oz. (227 gr.)
Weight
140 US$
MSRP
WHO IS IT FOR
Faster competitive runners who want to maximize their potential on race day
Help me choose

I received the Adidas Adizero Adios Boost 2 not long after trying the Boost material for the first time in the brand’s Energy Boost model.

Touted as one of the world’s fastest flats since it has been worn by many top-caliber marathoners of late, the Boost material only added to the Adios mystique that has stood for the last decade. I was excited to try this model, as I was intrigued by the blending of the Boost foam with a classic racer.

Out of the box, the shoe fits snug and I was initially concerned that I should have sized-up for the Adios. However, I had adequate room in the toes, so I just chalked this up to the shoe running a bit narrow in terms of overall volume.

The toe-box is triangulated, which I don’t prefer, but my toes didn’t feel too cramped as a result of this feature that many brands are moving away from of late.

My first run in the Adios Boost was an easy five miler just to break them in a bit. Again, I was concerned about the width being too tight, but eventually the upper’s material loosened after a few more short runs.

I wouldn’t recommend this shoe as an “out of the box” racer, as the materials do need time to soften.

The ride at slower speeds is pleasant. I could feel the Boost foam more when running with a light heel strike up to about marathon pace, and then the sensation of softness was replaced with a more rigid responsiveness once I was landing mid to forefoot at faster speeds.

My first real workout in the Boost was a lighter session of 200m repeats on level grass with my high school athletes. They felt great for this run, so I used them later that week in a longer tempo run on the road between marathon and half-marathon pace.

This was a great outing, as well. However, in track sessions and fartlek where I approached a sprint, these shoes don’t feel much different from other flats on the market.

To me, this shoe has a sweet spot pace/gait-wise where you can feel the Boost material more than the plastic arch support underfoot. Most runners aren’t paying $150 for a basic Continental outsole, so I would like to see the Boost foam more prominent across the foot in future renditions of the Adios.

Also, I’d personally enjoy a little more accommodation in terms of width and comfort from the shoe so I’d feel more confident to race a marathon or half in them.

The sole unit of the Adios Boost is definitely the key talking point of the shoe. The Boost foam is less noticeable than one might think in the brand’s new flat, and I actually could feel the forgiving nature of the material more at slower speeds than faster ones.

The Continental support feature which covers the foam adds durability and traction to prevent breakdown of the material. This hard plastic covering also increases the responsiveness of the shoe, and it is the first thing I noticed when running at half-marathon pace or faster in the shoes.

Honestly, I expecting a little more Boost and a little less plastic with this model, but just because you can’t feel something doesn’t mean it isn’t there. On longer runs and workouts, your legs do feel fresher longer with this foam.

The upper of the Adios Boost is made of a simple material that looks and feels like a throwback to the 1970s and 80s with a faux suede material over a simple mesh.

However, with all the space-age technology put into the Boost foam, I was a little disappointed that the upper didn’t employ a little more modernity than it does. It feels quite stiff on the foot; not restrictive, but very snug for a normal width shoe.

It took this material a few longer runs to feel comfortable on my foot, although I can’t report any blister or friction issues to support this feeling of snugness.

Hopefully Adidas will lighten these materials and soften them a bit in future installments of the shoe, as the Boost Adios simply doesn’t have that “I want to slip my foot into these” feel of many comparable flats the first few times you take them to the track.

Adidas Adizero Adios Boost 2 is a true study in irony for the footwear industry; it provides ultra-modern technology (the “Boost” package) blended with very basic materials that were available over 40yrs ago (suede, plastic, etc.).

The ride is crisp and fast, but I do feel the company could have put a little more into the upper and general feel of the shoe for the price tag. Serious competitors may enjoy this paradoxical mélange for races between 10K-Marathon and faster workouts on the road or track, but recreational runners may be better served purchasing a cheaper racing shoe to meet the same end.

We thank the nice people at Adidas for sending us a pair of Boost Adios to test. This did not influence the outcome of the review, written after running more than 50 miles in them.