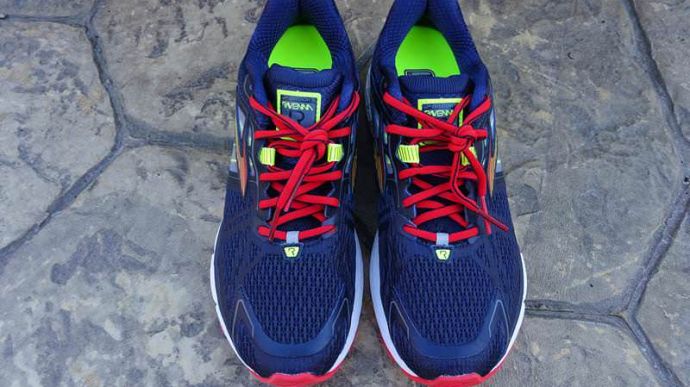 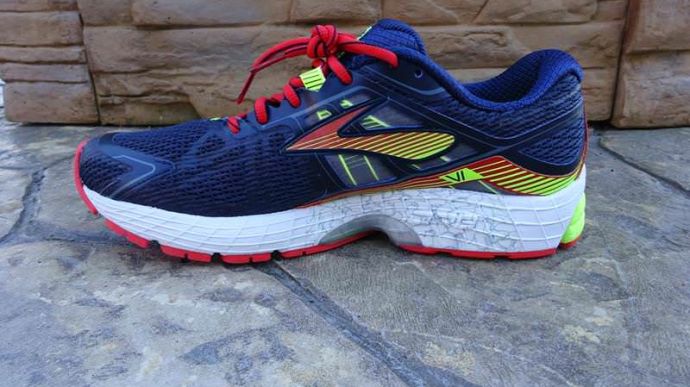 The Brooks Ravenna 6 is a solid daily trainer that maintains an adequate blend of stability and cushioning while delivering a more secure fit. The shoe retains the Brooks BioMoGo DNA foam which was introduced in the Ravenna 5 while the enhancements to the Ravenna 6 are found mostly within design updates to the upper, new mid-sole saddle and heel collar which offer a more stable and comfortable fit while providing for a smooth soft transition.
WHERE TO BUY
LOWEST PRICE
$110
SHOE INFO
Brooks
Brand
Ravenna 6
Model
Stability
Type
10.7 oz. (303 gr.)
Weight
110 US$
MSRP
Ravenna 5
Previous model
WHO IS IT FOR
The Brooks Ravenna 6 is designed for runners looking for reliable stability to assist with mild overpronation combined with adequate cushioning and a smooth ride.
Help me choose

The Brooks Ravenna 6 preserves many of the positive enhancements to the sole unit which were introduced in the Ravenna 5, which included the new BioMoGo DNA foam and Diagonal Rollbar in the midsole as well as the segmented crash pad and flex grooves, to maintain cushioning and flexibility.

The Ravenna 6 continues to offer the same quality blend of stability and cushioning which makes the shoe a versatile daily trainer.

The key updates in the Ravenna 6 were focused on the upper while the sole and cushioning, which were updated in the previous version, remained primarily the same.

The upper has a new mesh to make it thinner and more breathable while the saddle has been changed to give the runner a more customized and personal fit.

The latest version comes with a minimal weight increase (no more than 0.5 oz.) with the men’s now weighing 10.7 oz. while the women’s is 8.8 oz.

I was pleased that during my runs the marginal weight increase was not noticeable and the performance of the shoe helped keep my foot snug and in control.

The Ravenna 6 enhancements provided a more customized fit with changes to the upper while continuing to deliver a very quick, responsive transition throughout stride.

The Ravenna 6 continues building on its tradition of being an everyday trainer that allows for adequate control and responsiveness while not sacrificing stability or cushioning that runners enjoy.

There were minimal changes to the sole unit of the Brooks Ravenna 6. I was glad to see that the shoe kept many of the major enhancements that were integrated into the Ravenna 5 which made for a great running experience.

Often companies try to innovate and change when something works for a shoe but that was not the case with Brooks and the Ravenna 6.

There are many parts of the sole unit which remained intact and for a good reason – they worked well for the shoe and were comfortable for the runners.

The key design changes from the last version which were carried over have allowed the Ravenna 6 to maintain that fine balance between stability and cushioning.

The main sections of the shoes which remained unchanged are the integrated BioMoGo DNA midsole which allows for a smoother ride; the Diagonal Rollbar to assist with control pronation along with the Caterpillar Crash Pad and Omega Flex Grooves which allow for more flexibility and cushioning while delivering amore responsiveness feel during the foot strike.

The Caterpillar Crash Pad and new Omega Flex Grooves which run from the midsole to heel are designed to increase responsiveness and flexibility throughout the foot strike allowing for a fast and light transition.

The Ravenna 6 comes with average heel-to-toe drop of 10 mm which is similar to the previous model and comparable to other shoes in its same category.

The construction of the sole unit is meant to handle the high demands of a daily trainer while giving the runner adequate control and comfort when needed.

The updates made this year are not significant but can be seen by looking at the shoe straight out of the box and make for a more secure and solid fit while providing greater control.

The upper is comprised of Element Mesh which allows for increased breathability as well as assisting with moisture wicking.

One of the most visible changes to the Ravenna 6 upper are the overlays and mesh which were updated to increase stability and comfort.

The overlays are a newly-designed thin, clear plastic strategically placed around the forefoot to the midsole area which adds to the stability. The upper is modest compared to many other models but provides for a firm fit and comfy ride.

The Ravenna 6 kept the Adjustable Saddle which wraps the midsole of the foot. The saddle connects from the midsole to the heel secured to the sole unit in the shape of an inverted “V” and can be customized for each runner via the laces to add more stability during a run.

An enhancement to the Ravenna 6 this year was a more rounded heel collar which also added to the stability by keeping the heel firmly “locked” in place.

The changes to the upper which included changing the mesh material, thinner overlays, updating the adjustable midsole saddle along with the secure heel collar all were done to increase stability and control.

From the first time I put the shoe on; I could “feel” the positive changes to the upper. I noticed them just by the slight changes I could see in the materials but once I ran in the shoe it delivered additional control as my foot was more secure and comfortable.

I still had the ability to customize the “feel” of the shoe to my running style and my foot which is important through the adjustable saddle along with the new crash pad which flexes to each individuals running style.

As they saying goes, “if it is not broke, don’t fix it”. The Ravenna 6 made enhancements to the upper but retained the full-length Segmented Crash Pad, the BioMoGo DNA in the midsole and the Progressive Diagonal Rollbar all which contribute to the solid combination of stability and cushioning that runners look for throughout their running stride.

The updated heel collar provided even more protection and security for the foot as it locked it in place during the run without being too restrictive.

The upper in the Ravenna 6 has been updated yet Brooks did not change the integrity of the previous version.

The upper was tweaked with a slightly new design which added more comfort and control but continues to have thin overlays which are positioned on the new breathable, moisture wicking mesh.

The adjustable midsole saddle is still present however it provides for a more customized and personal fit. All the updates with the new Ravenna 6 allowed the shoe to deliver a secure fit along with a quick and efficient transition during the foot strike.

The Brooks Ravenna 6 is a shoe that offers that rare blend of stability and cushioning which makes it a solid everyday trainer. The shoe performed well on short, fast tempo runs as well as for higher mileage training runs.

The Ravenna 6 is designed to be primarily an everyday training and road shoe. For those runners who are looking for a shoe that can handle varied types of runs, the Ravenna 6 is one to consider.

We thank the nice people at Brooks for sending us a pair of Ravenna 6 to test. This did not influence the outcome of the review, written after running more than 50 miles in them.