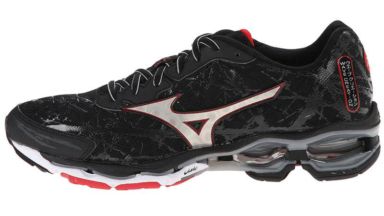 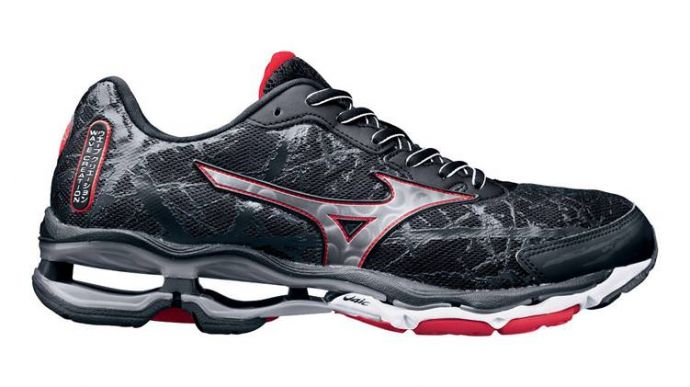 The Mizuno Wave Creation 16 may work for some heavier runners, but runners under 175 lbs are not going to feel any energy return due to the stiffness of the wave platform. This neutral trainer misses the mark on all accounts due to unresponsive cushioning, lack of any flexibility, and ridiculous price point.
WHERE TO BUY
LOWEST PRICE
$160
SHOE INFO
Mizuno
Brand
Wave Creation 16
Model
Cushioning
Type
11.90 oz. (337 gr.)
Weight
160 US$
MSRP
Mizuno Wave Creation
Family
Wave Creation 15
Previous model
WHO IS IT FOR
The shoe could possibly be worn by clydesdale division runners who like very rigid shoes.
Help me choose

I’ve seen the Wave Creation evolve from its very first offering, a well cushioned neutral trainer which was still designed for faster paced running, to its current incarnation which feels more like a corrective orthotic lacking really any functionality.

Taking the Wave Creation 16 out for a run felt like strapping to rigid blocks to my feet which neither flexed during toe-off or providing any sort of cushioning.

The overdone wave design, which stretches from heel to mid-foot, is so hard that my 150 lb frame could not compress it in the slightest.

The Wave Creation 16 aims to be Mizuno’s top of the line, Cadillac level of cushioning with a plush upper. In one sense, it accomplishes this.

However, Mizuno seems to try and reinforce their wave cushioning structure, almost to a ridiculous sense, making it see through in the heel section of the shoe.

As one can expect from any Mizuno shoe, the thermo molded plastic that creates the cushioning system causes a more firm ride.

While most Mizuno shoes feel very firm when initially trying them on, they usually compress and feel resilient on runs.

This is not the case with the Wave Creation 16, as the feeling of walking around in them on concrete was basically the same as during the run. The infinity wave plate offered very little compression and cushioning.

The midsole of the Wave Creation 16 is comprised of Mizuno’s Wave technology which uses pieces of thermoplastic to create a wave rather than traditional EVA foam midsole material.

In the past, the Creation has featured wave technology bolstered by EVA, but in the Creation 16 considerably less of this material is used around the hard plastic unit.

This yields a very stiff and uncomfortable ride, and with competitors in the field continually adapting better and longer last EVA foams, Mizuno has stuck with this same technology for the better part of fifteen years.

The outsole of the shoe is a slow wearing carbon rubber, and Mizuno’s X10 carbon rubber is placed on the heel and forefoot for additional traction.

As with most Mizuno shoes, the wave plate leaves an exposed area around the mid foot where additional rubber is removed, likely to save weight.

This provides the shoe with some torsional rigidity, but the exposed plastic is a bit perplexing for a mid foot runner and relegates this shoe as a “road only” type of running shoe. Any running on crushed gravel or even smooth trail felt very unstable.

This is one area where Mizuno really seems to have dialed in with most of their road shoes.

The classic Mizuno fit, in my opinion, is snug in the heel and mid foot opening up into a nicely accommodating toe box which allows for a bit of toe splay.

The heel collar, tongue, and lacing system of the Creation 16 is simple, comfortable, and without any unnecessary gadgetry.

The dual density mesh is very breathable and overlays are placed in effective high wear areas. In fact, this is a very good looking running shoe until you get to the “platform shoes” effect of the gaudy wave plate.

Rather than trying to cram as many new wave cushioning contours as possible into the heel section of the Creation, Mizuno may serve themselves best by returning to what has worked for them in the past; combining wave technology with responsive EVA foam that gives the shoe a softer feel.

One thing is for sure, besides the excellent fit of the shoe, the Wave Creation 16 is not a shoe that I would recommend for any runner.

Unless you’re looking for a stiff shoe with very hard cushioning, the Wave Creation 16 will likely leave you dissatisfied and $160 poorer.

We thank the nice people at Mizuno for sending us a pair of Wave Creation 6 to test. This did not influence the outcome of the review, written after running more than 50 miles in them.