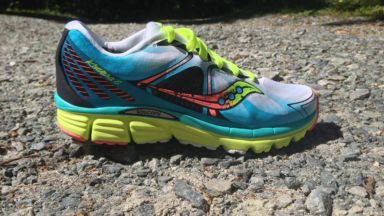 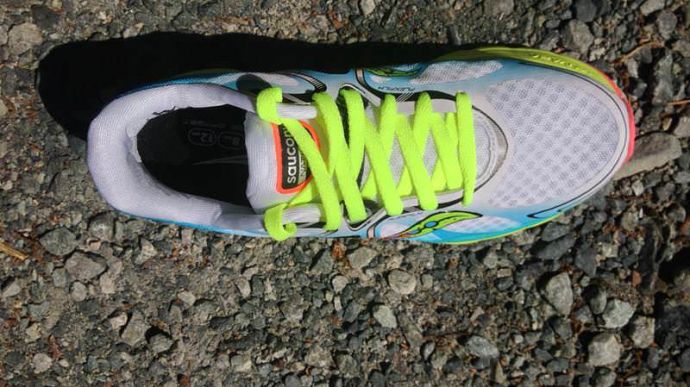 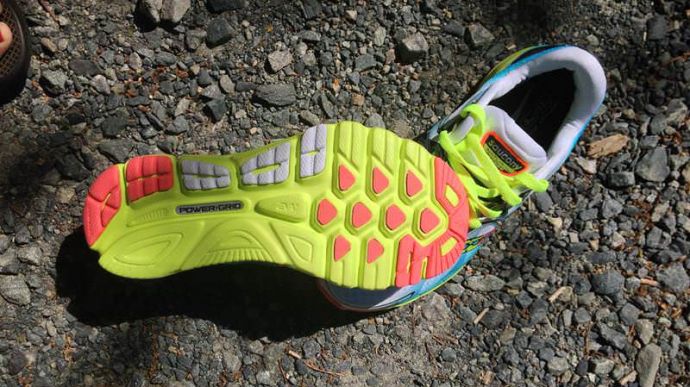 This 6th iteration of the Saucony Kinvara fortunately does not boast any major deviations from version 5. After only a couple of runs in the Kinvara 6, I knew that this shoe would likely be one of my favorites of 2015.
WHERE TO BUY
LOWEST PRICE
$72
SHOE INFO
Saucony
Brand
Kinvara 6
Model
Lightweight
Type
6.5 oz. (184 gr.)
Weight
100 US$
MSRP
Saucony Kinvara
Family
Kinvara 5
Previous model
WHO IS IT FOR
Runners of all types looking for a lighter weight cushioning shoe.
Help me choose

The Kinvara 6 maintains the same simplicity and style that has led to the establishment of its die-hard fan base since it first hit the market in 2010.

This shoe feels good on any and every run type. Use it as a daily trainer, speed trainer, and long run shoe.

Known for its impressive balance of comfort and performance, it offers an impressively soft ride given the lightweight construction. There’s a reason scores of runners are intensely loyal to the Kinvara.

I couldn’t wait to get these shoes on my feet as soon as I opened the box. The Kinvara 6 is a sharp looking shoe. It just looks fast.

The first thing I noticed in my initial run in the Kinvara 6 was the luxuriousness of the ride. The second thing I noticed was how the Pro-Lock lacing system was suffocating my midfoot.

My typical routes include a combination of road, gravel, and groomed limestone trails; the Kinvara 6 performed well on all surfaces.

As a neutral performance shoe, I have enjoyed wearing these shoes most on up-tempo runs.

The Kinvara 6 continues to utilize Saucony’s signature PowerGrid technology underfoot with imperceptible changes to the shoe’s platform from version 5. The Flexfilm external support frame has been updated for added flexibility.

The Kinvara 6 employs injection blown rubber in strategic zones on the sole in order to keep the weight of the shoe down while providing optimal durability and protection in areas where the highest ground contact occurs.

Saucony’s PowerGrid platform is constructed of a foam material under the sockliner that is designed to evenly distribute pressure and impact with each step.

This is the technology behind the exceptionally smooth and responsive ride. I expect that runners will be able to get as many miles out of the Kinvara 6 as they did previous versions since the sole unit remains largely unchanged.

The upper of the Kinvara 6 features two technical components: FlexFilm and the Pro-Lock lacing system. The FlexFilm overlays are melded to the upper of the shoe to eliminate seams.

In this update to the Kinvara, the FlexFilm has been enhanced to better accommodate natural movement of the foot. Even so, I found the upper to be the only problematic element of this shoe.

I attribute my issues to the Pro-Lock lacing system which was, at first, uncomfortably restrictive around the middle of my narrow feet.

The first time I wore the Kinvara 6 I had to stop 30 minutes into the run to loosen the laces and Pro-Lock pieces (they sit underneath the main upper unit, but on top of the tongue) because my foot had gone numb.

Fortunately, the more I have run in the Kinvara 6, the more forgiving they have become. While I avoid wearing thick socks in them, I have not experienced any foot numbness since that first run.

However, for a runner with a lower arch or wider foot, the overly tight Pro-Lock system could potentially cause significant discomfort. Despite this issue, I did find that the toe-box was adequate.

The Kinvara is Saucony’s most recognized contribution the running shoe market for good reason, and version 6 is in keeping with the lightweight, high-performing comfort that runners have come to expect from this shoe.

Simply put, this shoe just feels so good underfoot. I’m looking forward to many more miles in the Kinvara 6.

We thank the nice people at Saucony for sending us a pair of Kinvara 6 to test. This did not influence the outcome of the review, written after running more than 50 miles in them.

Visit ShopAmazon.com
Sorry - Product not found. Please try RunningWarehouse.Com to check in their assortment.
This page contains affiliate links. As an Amazon Associate I earn from qualifying purchases.
WHERE TO BUY
LOWEST PRICE
$72
AVAILABLE ON SALE:Previous model $71