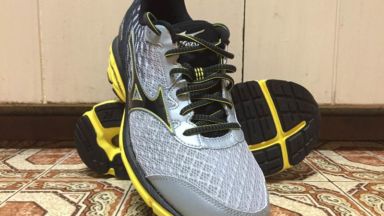 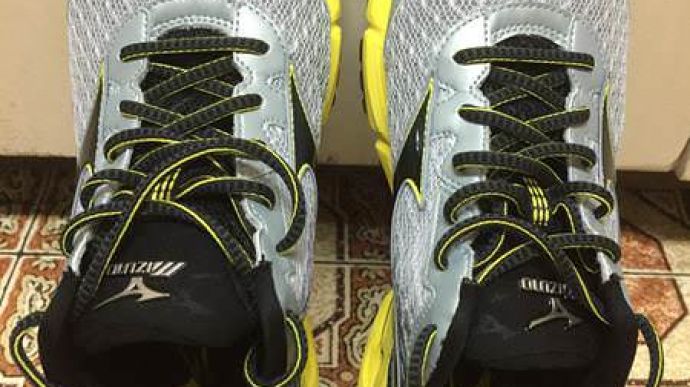 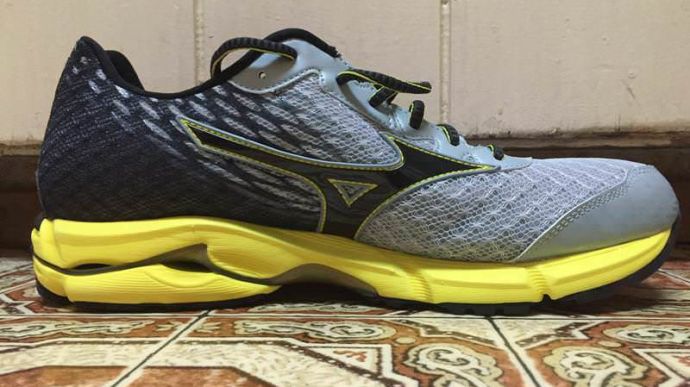 The Wave Rider 19 is a great option for high mileage daily training. It adds some welcomed upgrades from the previous version and provides a comfortable responsive ride.
WHERE TO BUY
LOWEST PRICE
$119.95
SHOE INFO
Mizuno
Brand
Wave Rider 19
Model
Cushioning
Type
9.60 oz. (272 gr.)
Weight
119.95 US$
MSRP
12 mm
Heel Drop
Mizuno Wave Rider
Family
Oct / 2015
Release Date
Wave Rider 18
Previous model
WHO IS IT FOR
I would recommend this shoe to runners of all types. This is an all around quality running shoe.
Help me choose

The Wave Rider 19 is the newest upgrade to the popular Mizuno Wave Rider series. This shoe is packed with technology and upgraded versions of technology use in previous models.

It weighs 9.6oz and has a 12mm heel to toe drop. Below is a description of some of the technologies incorporated into this shoe.

U4ic/U4icX: In 2013 Mizuno introduced a newly designed foam material that was 30 % lighter and delivered better shock attenuation and durability than their previously used AP+ foam.

They’ve now taken this U4ic foam and refined it to be lighter and softer creating U4icX which is featured in the Wave Rider 19.

Mizuno Wave: The Mizuno Wave is located within the midsole of the shoe and acts in a similar way to your cars suspension. Its purpose is to redirect impacts forces away fro your foot.

X10: This technology refers to the carbon rubber used in the outsole. X10 is meant to be extremely durable and is utilized in higher impact areas of the outsole.

There are additional technologies included in this shoe but some of the information about them was rather vague. Things like air mesh and Mizuno intercool seemed to just be fancy words for the mesh used in the upper and the shoes breathability.

There were a couple of things I noticed right away about the Wave Rider 19. The first is that when you look at the shoe in profile you can actually see through the midsole in the heel area.

It looks like a little built in shock absorber in the heel, which gives this shoe all of the ingredients to be a heel strikers dream. The upper feels comfortable with soft, push materials.

As previously mentioned, this shoe is packed with technology and much of that technology is in the midsoles materials and design. The new U4icX is a really nice midsole material.

Comparing the shoe to other Mizuno shoes I have run in I can’t say that I notice a huge difference in the feel of the material. It feels very similar to the U4ic foam but may be just a tad softer.

I have found the U4ic material to be decent in the past so I would say the U4icX is a small improvement to an already decent midsole material. The heel portion of this midsole is really soft and clearly caters toward heel strikers.

This is something I find to be true with many of the Mizuno shoes I have run in. One criticism of the previous generation Wave Rider (18) was that the shoe felt a little bit too firm in the midfoot and forefoot.

The new model does feel firmer in the midfoot and forefoot than in the heel area but I wouldn’t describe it as a firm ride. If I were to grade the cushioning on a scale of 1-10 1 being soft and 10 being firm I’d put this shoe at around a 7.

I had no real issues with this even though I generally prefer a softer riding shoe. I think the little bit of extra rigidity moving forward from the heel to the toe area creates a nice smooth riding midsole that is comfortable and responsive.

The new foam is not the only contributor to this smooth ride. The Mizuno wave along with two key flex points in the forefoot incorporated into this midsole adds to the experience.

The outsole is composed of x10 rubber that has been durable thus far.

The upper of the shoe is composed of high quality mesh materials that provides good breathability. From the midfoot forward this shoe has a very thin mesh layer that allows air to flow through the shoe.

If you hold the shoe up to the light it is actually so thin that you can see through it. The shoe has a really soft sock like feel to it.

Materials used in the heel of the shoe and tongue are very soft but also have a texture that grips your sock and holds your foot in place.

I have run in several Mizuno shoes and one issue I have had was that the upper materials, while soft, had too much of a slippery finish to them.

This resulted in my foot just slipping around all over the place when running in the shoe, especially on trails. The heel and tongue material used in the Wave Rider 19 are pretty spot on.

The upper does a great job of gripping your foot and holding it securely without sacrificing softness. The Waver Rider 19 has an average sized toe box so for those preferring a shoe with a wider toe box this is not the shoe for you.

I generally only have issues with a toe box if it is too narrow and this upper caused no issues with toe rubbing or blistering.

It is not seamless but again for me, this upper did just fine. So far after more than 50 miles this shoe has held up well.

This is the first Mizuno road shoe I have run in and I was pleasantly surprised by how nice this shoe was. The Mizuno Wave is much more noticeable when running in their road shoes compared to trail shoes.

The upper was comfortable enough. Overall I was really happy with the Wave Rider 19. The only thing that really bothered me was that the shoe does encourage a heel strike.

With its 12mm heel to toe offset and highly cushioned heel I found myself getting a little lazy with my own form and changing the way my foot hit the ground. This isn’t unique to the Wave Rider 19 though.

Really any shoe with lots of cushioning in the heel will cause this for me. This also tells me that this shoe is probably a really good option for heel strikers.

I really do think this shoe is a great option for runners that put in high mileage and are looking for something durable and comfortable.

This shoe didn’t really blow me away in any one area, it is just an all around quality shoe and would be a satisfactory option for most runners.

There is nothing negative I can really say about it however I also can’t say that it’s the best shoe I’ve ever run in.

I’ve grown accustomed to running in very lightweight shoes so it would be nice if this shoe shed some weight, but compared to many other shoes in its class it is probably on the lighter side.

I would also prefer a little bit softer of a ride but i would be lying if I said this shoe did not have a comfortable ride. It did just fine. If you were a fan of the previous version, I cant imagine you being disappointed with the new one.

We thank the nice people at Mizuno for sending us a pair of Wave Rider 19 to test. This did not influence the outcome of the review, written after running more than 50 miles in them.