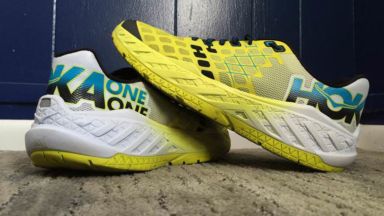 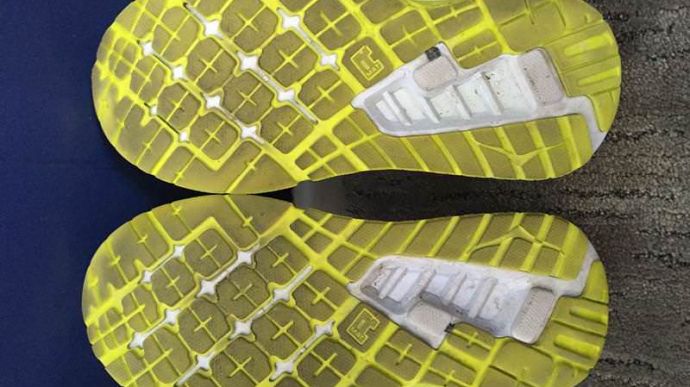 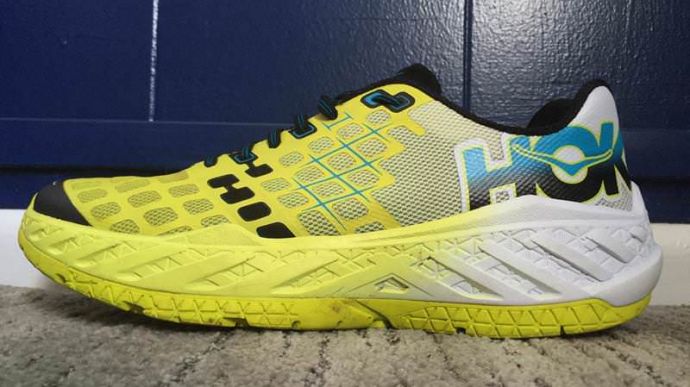 The Clayton is a dual purpose shoe that is cushioned enough to train in yet light and responsive enough to race in.
WHERE TO BUY
LOWEST PRICE
$150
SHOE INFO
Hoka One One
Brand
Clayton
Model
Racing
Type
6.30 oz. (179 gr.)
Weight
150 US$
MSRP
4 mm
Heel Drop
Apr / 2016
Release Date
WHO IS IT FOR
This shoe is for runners of all abilities looking for a stable, lightweight, responsive running shoe.
Help me choose

Hoka One One Clayton General Info

The Hoka One One Clayton is a lightweight, neutral, cushioned road shoe that is all new for 2016. It weighs only 7.3 oz with a stack height of 20mm in the forefoot and 24mm in the heel giving the shoe a 4mm heel to toe drop.

In Hoka’s words, the goal of the clayton is to continue their tradition of revolutionizing lightweight cushioning. The shoe promises a soft yet responsive ride and introduces PRO2LITE technology.

PRO2LITE is a name for having a softer more cushioned heel and a firmer more responsive forefoot with the goal of aiding in propulsion.

The first thing I noticed about the Clayton aside from its light weight is that it has a wide base. When I put the shoe on I immediately notice an arch bump and more room for my toes than I usually notice with Hoka One One shoes.

The only thing supporting the heel is a very small amount of midsole material that raises up in the heel area. I also can immediately notice the wide base at work in the form of stability.

The shoe feels great on my foot and the extra room in the toe and forefoot area is a welcomed feature.

Hoka One One Clayton Sole Unit

The midsole of the Clayton feature standard EVA foam as well as Hoka One One’s signature RMAT material.

There is more EVA foam in the heel and the shoes midsole feels like it becomes composed of mostly RMAT material moving forward into the forefoot. This cushioned Heel and firmer more responsive forefoot has been branded as PRO2LITE technology.

The outsole is composed of only RMAT material, there is no actual rubber outsole material which is part of what allows the shoe to stay so light.

RMAT is a material that I first encountered in the Hoka One One Huaka. It was designed as a type of foam that would provide increased rebound, grip and durability and could also be used as an outsole material.

I was a fan of the RMAT material then and still am with the Clayton. The RMAT actually does feel like a more springy foam material and I think they have a done a great job of incorporating both RMAT and EVA foam into this shoe.

It definitely does feel softer in the heel, if you land on your heel. In addition to the varying densities and levels of cushion in the midsole, the shoe features early stage meta-rocker design.

This meta-rocker technology is pretty much standard in Hoka One One’s shoes and is something that I really like about their shoes. It gives the shoe a rockered profile that helps aid in propelling you forward.

It manifests itself by creating a very smooth transition from foot strike to toe off. If you haven’t experienced the smoothness of this sort of design, it will immediately be noticeable to you when running in a shoe that has it.

The overall ride of the Clayton is exactly what was intended, smooth and responsive. The use of RMAT material is what gives this shoe its responsiveness.

The soft heel, firm forefoot construction also gives this shoe a nice ride but I don’t think its really a selling point or highlight feature for everyone.

I am more of a midfoot striker so for me I really noticed no benefit of the PRO2LITE technology.

Where my foot strikes the ground I was mostly landing on a thinner layer of RMAT so while I noticed and appreciated the responsiveness, I didn’t really get to benefit from that softer heel.

I was able to change up my stride a bit just to test it out at times and it felt great when landing on my heel. I think overall if you land mostly on the heel, your going to be really happy with this shoes ride.

I land mostly on my midfoot and I was still pleased with the ride of the shoe. The RMAT foam is really nice and springy. It provides just enough cushion and allows the shoe to stay responsive.

As an outsole material RMAT has plenty of grip for road running. It has an interesting characteristic to it that actually feel like it gets more grip in the rain.

I did not test it on snow but I’ll assume it probably fares just as well as any other road running shoe in the snow.

When an outsole is completely rubber free I sometimes worry about durability. Sure RMAT was built for durability but its not as durable as rubber. It can’t be.

This is a sacrifice you’re going to have to make if you want a super lightweight shoe like this. The weight has to be made up somewhere and in this case I think the rubberless outsole is a big part of that.

I Still think you could get 350+ miles out of this shoe, but for those whelk to push those numbers to 500+ I’m not so sure it would be possible with this one.

Hoka One One Clayton Upper Info

Hoka One One Clayton – Top

The upper of the shoe is composed of a thin mesh material with welded TPU overlays. There are no seems to be found. The TPU material is laid out in a lattice like pattern and is what give the shoes upper structure.

The heel of the shoe is unique in that it doesn’t have the usual firm plastic piece inside of it to give it structure. It is basically just thick upper material that wraps around your heel. I wasn’t sure what to think about the heel of the shoe at first. It just didn’t look right and my first thoughts were that I was not going to like it.

After running in the shoe for a while at this point it is actually something I would prefer. I feel like with the way it wraps around your heel it actually helps maintain the position of your heel in the shoe. I noticed less sliding forward of my heel inside the upper and the shoe feels very secure on my foot.

This upper also has something people have been asking for for a long time in Hoka One One shoes, a large toe box. The is the first Hoka that I’ve run in that feels overly roomy in the toe box area. There have been some with more room than others but with the Clayton I think they made it a point to exaggerate the size of the toe box. It feels nice and roomy up front.

For the most part I was happy with the feel and fit of the upper. I really like seamless upper construction and the wide toe box feels great. The fit feels like it hugs your heel and midfoot and then opens up in the toe box area.

I had some issues initially with the arch bump in this shoe which is why I say I was happy for the most part. In general I prefer little to no arch bump. This shoe has more of an arch bump than i normally prefer. This is usually not a problem and something I can adjust to and get used to over time but the positioning of it caused a few rubbing issues on the inside of both feet. The rubbing/ blistering happened on the inside of my feet where the ball of my foot connects with and begins the arch of my foot.

Initially I was worried about this issue but as I continued to run in the shoe I found that my foot adapted and I was able to deal with it. It actually felt like the issue just went away. It would however present itself while running longer distances. I’d start to feel it at around 10 miles so Im assuming my foot just got calloused in the rubbing area and was able to withstand the rubbing only for so long.

Hoka One One Clayton Conclusions

I enjoyed running in this shoe aside from the rubbing issues described earlier. Like I said eventually my foot adapted and I was able to run in the shoe with no issues on a regular basis.

I will definitely be putting more miles on these and regularly running in them. I think the shoe does a great job of balancing responsiveness and cushioning.

The forefoot get a little more firm but the RMAT material allows it to still provide adequate cushioning. The wider toe box is something I was really happy with as well. One downfall I wonder about with this shoe is the price.

This is a really good shoe but it’s pretty expensive. As far as comparing the shoe to others I’ve run in I personally prefer the more soft and squishy ride of the Clifton over the responsive ride of the Clayton.

Again thats me consciously making the decision to sacrifice some responsiveness for softness. I think the Clayton wold make a really good racing/training marathon shoe. It is cushioned enough, responsive and super lightweight.

Comparison to other Hoka One One models:

There are two other Hoka One One shoes that come to mind when thinking about the Clayton. I cant help but think of the Clifton and the Huaka.

The Clifton because of its super lightweight frame, and the Huaka because of its all RMAT midsole, and mostly RMAT outsole. The Clayton has a more responsive but a less cushioned ride than the Clifton.

If you enjoyed the Clifton but found it to be too squishy and soft then the Clayton could definitely be an option. The Huaka is a bit more cushioned and less responsive than the Clayton.

The Clayton is essentially a Huaka with a little more of a heel to toe drop and a firmer ride. If you liked the Huaka this is probably a really good option to check out but its not better.

We thank the nice people at Hoka One One for sending us a pair of Clayton to test. This did not influence the outcome of the review, written after running more than 50 miles in them.

Hoka One One Clayton Price Comparison

Similar shoes to Hoka One One Clayton

Hoka One One Clayton Review