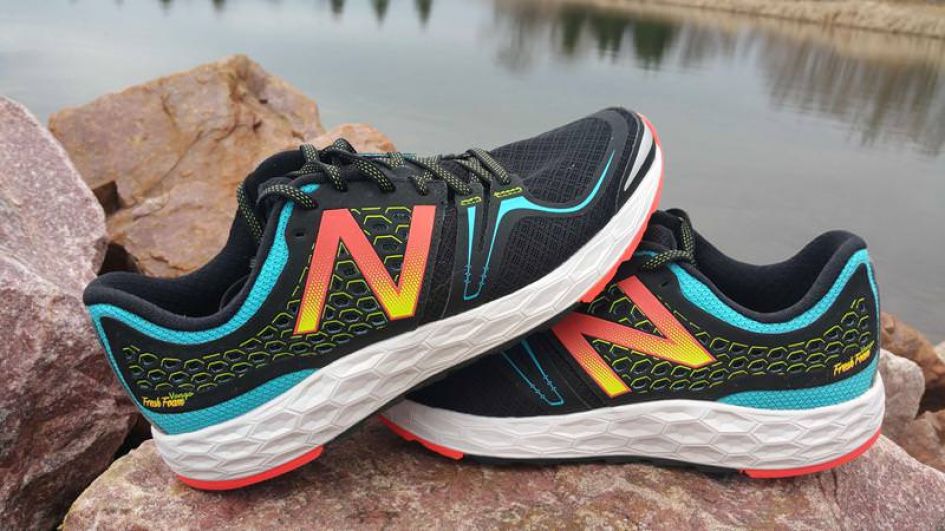 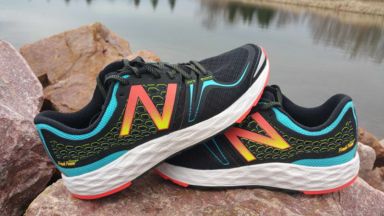 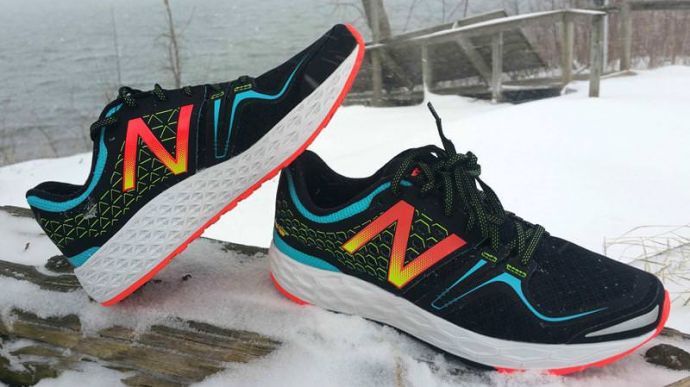 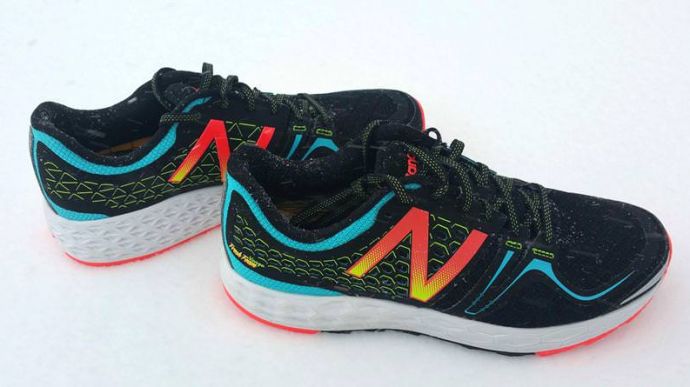 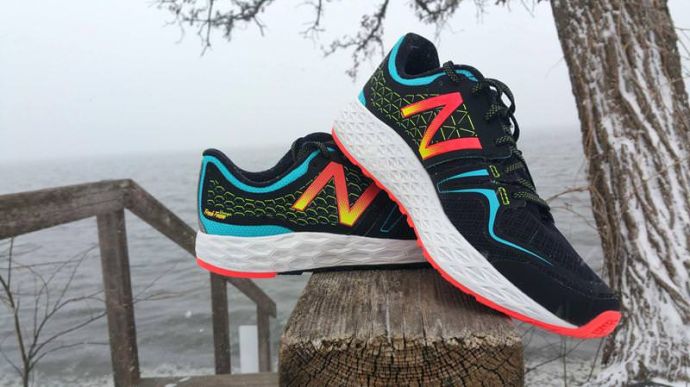 It’s super comfortable and shines in its niche but most certainly is not a shoe for everyone, particularly those with high motion control needs or who prefer a roomy toe box.
WHERE TO BUY
LOWEST PRICE
$149
SHOE INFO
New Balance
Brand
Fresh Foam Vongo
Model
Stability
Type
10.60 oz. (301 gr.)
Weight
129.99 US$
MSRP
4 mm
Heel Drop
Mar / 2017
Release Date
WHO IS IT FOR
It's perfect as a second shoe for "stability runners" to mix in for speed days or mid to long runs. A beginning runner could also start in this shoe as the muscles used in running will be newly challenged as it is!
Help me choose

Talk to me too long and too in depth about running shoes and you’ll soon find out that I loved running in Minimalist shoes (anyone still do that?) until finding out that I have loose ligaments in my feet which caused pain at the head of my left 3rd metatarsal.

And so I was forced back into stability, or at least neutral, shoes, but my brief stint did help me to correct some form issues and develop a more mid-foot strike.

However, the sorrow over losing my newfound running freedom, was real.

Enter the New Balance Fresh Foam Vongo with its snug shallow-fitting toe box to give my toes the stability that they need, cushion that can bear the brunt of repeated pounding, and a lightweight low drop that reminds me of my minimalist days.

Vongo strikes me as New Balance’s attempt to combine High cushion (like HOKA) with a fitted upper (opposite of HOKA).

Its toe box fit is the closest parallel to Kayano‘s that I’ve run in (yeah! That’s my groove), however it’s just slightly less secured—making it a bit more breathable as well, especially compared with Kayano 22.

This means that the toe box height is more shallow than most; the sides are narrowish in width but accommodate my medium foot well as they adapt to foot shape versus pinching laterally (3 HOKA models I’ve run in) or rubbing medially (Transcend) when laces are snugged up. This shoe can also be ordered with in Wide width.

It’s so comfortable that I want to wear it for every run, but I think it’s best to ease into wearing Vongo if you’re new to running in a shoe with a low drop height.

Vongo joins New Balance’s extensive stability lineup which includes the 940v3, Vazee Prism v2, and their other model that I’ve reviewed, the 1260v6, a heavier shoe offering top-line motion control in the heel and a moderately cushioned ride.

Vongo is the brand’s first stability shoe in their Fresh Foam division, and I find the Fresh Foam cushioning to compete well with my current favorites, adidas’ Boost and Brooks’ DNA midsoles; all are soft yet responsive whereas I’ve found HOKA’s cushion to be soft and a bit energy-absorbent.

Out of the box Vongo felt super light, and the comfortable upper-plus-sockliner made me excited to get out and run in them! Comparable shoes are going to be the New Balance 770 v5, Brooks Pure Cadence 5, and adidas Ultra Boost ST.

The most notable feature that Vongo offers is its Varus Wedge midsole, also found in Brooks’ benchmark model the Beast (men’s) and Ariel (women’s—same shoe).

Often found in heel wedges or shoe inserts, a Varus Wedge is angled from a higher medial side down to a thinner lateral thickness, to correct pronation of the ankle and its resulting ankle, knee and low back problems.

Because Vongo relies solely on this built-in Wedge and a medial forefoot that is flared out from the upper to ground contact, to combat pronation, without utilizing more traditional medial posts or midfoot shanks, the ride offered is lighter and more smooth than that of many stability shoes on the market.

The blown rubber outsole is split by a line running from the heel into the midfoot which seems to aid in the shoe’s structured flexibility and smooth transition.

The pattern is not otherwise remarkable and does not appear to promise extensive durability.

Vongo’s synthetic mesh upper slides on and hugs the foot with comfortable, breathable support, with a low-cut heel to avoid Achilles chafing. Perforated overlays add structure, breathability and a unique design feature to the shoe, and available colors range from subtle (mostly gray or navy) to bright flashes that catch the eye.

(I read someone call them “clown shoes,” but I still like mine! And I don’t like clowns…flashbacks to the one at all the parades when I was a kid.)

Vongo is an interesting shoe that is comfortably fun to run in! I rate it at 4.75 stars—rounded up to 5 🙂

Focusing on an initial midfoot plant challenges my posterior chain muscles to an extent that my legs fatigue earlier in a run (the longest I’ve run in these being 12 miles), and I completed fewer intervals on speed workout days.

This offers a strengthening goal for me versus a slight on the shoe itself. I’m sure that there are runners who can go longer in this shoe—and maybe even heel strikers who enjoy the plush cushion throughout; if you’re one of these runners, let us know in the comments!

While I loved the freedom of “barefoot” running, the podiatrist let me know that the source of my pain was a genetic/use-inspired laxity in my ligaments—and also that this type of running should only be done on natural, uneven surfaces.

Now that I realize how much I love good cushion, I don’t think I ever would have made it to my uncommonly impetuous goal of running a marathon in Vibram Five Fingers anyway, and this debut shoe from New Balance is what my feet were looking for all along!

While Vongo’s namesake is a video on demand service from the early 2000’s that acted more like a virus than a usable program, I think that New Balance’s version can redeem the name, for the right users.

Try it out, and as with anything that changes your muscle activation and form particulars in running, ease into this shoe if it’s a dramatic change from what you’re used to.

Expect some soreness as you get stronger, but your (lack of) injuries will thank you!

I call this a “strengthening shoe,” in that the low drop height (4 mm) brings an increased challenge to the posterior chain muscles highly involved with running (calves, hamstrings, medial glutes in particular) as well as the quadriceps if a heel-striker* is trying to land more midfoot, and I recommend it to more experienced runners who either enjoy the increased range of motion of barefoot running but desire more cushion and (light) stability, or who seek to build strength while fine tuning running form.

*Some runners love their heel strike and argue vehemently against anyone suggesting that they change—relax! I’m not saying that you have to or should.

I found that changing my form in this way, which was quite a process, greatly reduced my knee and low back pain after long runs. If you’re interested in my journey, check it out here!

We thank the nice people at New Balance for sending us a pair of Fresh Foam Vongo to test. This did not influence the outcome of the review, written after running more than 50 miles in them.

Visit ShopNewBalance
This page contains affiliate links. As an Amazon Associate I earn from qualifying purchases.
WHERE TO BUY
LOWEST PRICE
$149