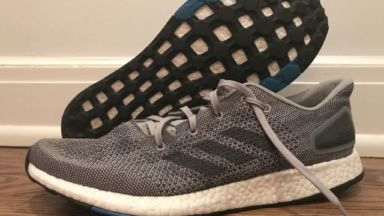 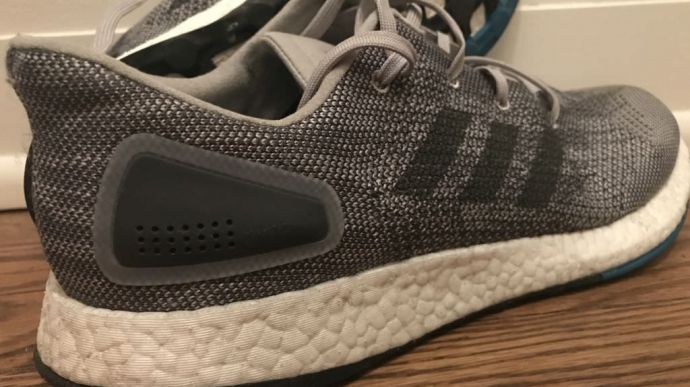 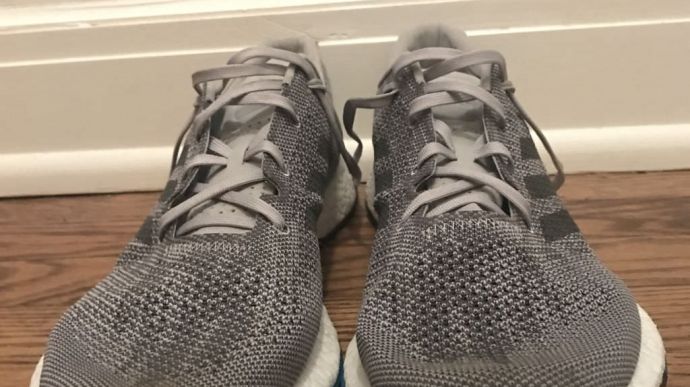 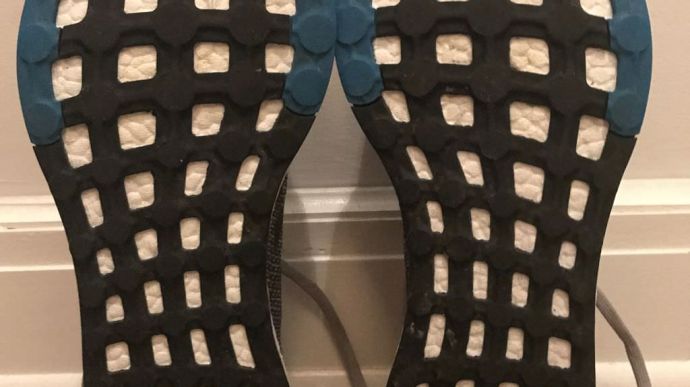 The Adidas Pureboost DPR is a neutral lightweight daily trainer that can handle tempo, recovery, and long runs. The shoe fixes many of the issues of the original version to provide a comfortable ride. It is a good option in the rain and is a huge step in the right direction from the original Adidas Pureboost.
WHERE TO BUY
LOWEST PRICE
$39
SHOE INFO
Adidas
Brand
Pureboost DPR
Model
Cushioning
Type
9 oz. (255 gr.)
Weight
150 US$
MSRP
24 mm
Heel
8 mm
Heel Drop
WHO IS IT FOR
For runners who are looking for a lightweight and cushioned shoe that can handle both tempo and long runs and who care about the visual appeal of their running shoe. The Adidas Pureboost DPR can be a good introductory shoe to boost cushioning for beginner runners.
Help me choose

The Adidas Pureboost DPR is a new version of the Pureboost line that is marketed as a shoe made specifically for city street running.

It features a wider platform to allow for better traction and the ability to change direction comfortable and quickly, a knit upper, a lower stack height then other similar Adidas shoes and the Adidas boost foam.

To test these shoes, I used them on long runs, for daily training, interval runs, and of course the city streets claim was put to the test by running with the Pureboost DPR through packed city streets to experience its grip and feel when making a sudden change of direction.

The Adidas Pureboost DPR fits as the middle-ground in multiple ways within the Adidas neutral lineup. The DPR falls between the boston boost and the energy boost lines.

It can be viewed as a shoe that is a more affordable, better performing, and better valued ultraboost.

Performance wise competes with similar lightweight yet cushioned daily trainers such as the Brooks Launch, Asics Dynaflyte, and Nike Elite.

The Pureboost DPR certainly is intended to compete in the fashionable running shoe market so it will be interesting to see how it stacks up to the Brooks Revel when that shoe releases.

The original Pureboost was released within this fashionable running shoe category and has so many flaws that it could not be considered a functional running shoe. Adidas often finds themselves in a struggle of function vs fashion and the Pureboost most certainly fell on the side of fashion. The Pureboost DPR fixes many, but not all, of those issues to create a solid choice within the marketplace for runners who want a shoe that lightweight, cushioned, and sleek looking.

The original Pureboost did not ship with an insole, had a knit upper with thick laces that were designed with the look of them in mind over their ability to lock down a foot, and a double fold over tongue.

The DPR version moved to a traditional tongue, traditional laces, included an insole, and dropped an ounce from the original. The outsole was widened at the forefoot for better traction and the upper was changed to an all mesh material.

The visual appeal of the Pureboost DPR certainly makes slipping them on for the first time a treat. They look fast. Regardless of the two main colorway choices they are grey shoes with a splash of color on the outsole that is just an accent.

The first run in them quickly highlighted some of the issues with the shoe however. The tongue is attached only at the throat line of the shoe. That is the area where the toe box meets the vamp, or mid-portion of the shoe at the end of the lacing area in the midfoot.

The one attachment point for a very long tongue allows the tongue to fold over on itself along the midfoot and does not keep the tongue in place. After the tongue issues I quickly noticed that the shoes shipped with the lacing pattern of the laces over the eyelets instead of traditionally under.

This prevents a heel-lock lacing pattern so I had to re-lace the shoes to the traditional pattern. There are only five total eyelets per side including the second eyelet at the top that most runners do not use. The last issue noticed at first was the feel of the plastic fitcounters on the heel.

The medial, or inside plastic pieces felt as if they were rubbing without doing a heel lock lacing. Once I changed the lacing on the shoes, and utilized the fifth eyelet, the noticeable feel of these external plastic counters did go away.

The laces were shorter then I would have preferred for this lacing technique for a size 12.

Adidas boost is a great material to make up the midsole of a shoe. It is soft when going slower and easier, firm when picking up the pace. The material is durable, light, and most of all comfortable.

The Adidas Pureboost DPR is an entire full-length Adidas boost mid-ole. It does not feature the plastic torsion system found in other shoes such as the Adidas boston boost 6. This makes for a cushioned yet, less snappy feel.

The rubber outsole stretches the full length of the Pureboost DPR and provides an excellent grip on the road. With the widened forefoot midsole in this shoe helps give an even better feel of traction on these shoes. On wet surfaces the shoe handled potentially slippery surfaces well.

The upper of the Adidas Pureboost DPR is an entirely knit, seamless material. It is narrow in the mid-foot area and has a longer toe-box then most shoes. The tongue is only connected via stitching at the end of it near the near toe-box and this leads to some folding and tongue slippage.

The laces only pass through four eyelets on each side if you do not use the top eyelet to lock down the heel. While doing a ‘runner’s loop’ or heel-lock lacing, the laces are very short.


The knit upper is comfortable and does conform to the runner’s foot. The material is great in the rain as it does not retain water.

The Adidas Pureboost DPR feels like the version just before a great shoe. It has a lot of great things going for it, improves on the non-functional Pureboost, yet has some flaws preventing it from crossing the threshold from an okay shoe to a great option.

The cushioning, the outsole grip, the feel of the knit upper, the weight, and the style of the shoe are all check in the positive box for the Adidas Pureboost DPR. It improves on the Pureboost by including an insole, which as an aside is a joke to even have to note this, has a low stack height, and a traditional functional upper.

The Pureboost DPR seems like it needs a few adjustments to make it a good shoe. If the tongue was connected at a higher point it would prevent the slippage and folding. The midfoot is tight but additional eyelets would allow for better adjustments on fit and longer laces would help with additional lacing patterns. The external plastic heel counters are a little bulky and should probably be switched to the external plastic cuff found in the supernova.

Personally, I find myself excited to reach for the Pureboost DPR in the rain but in all other scenarios I would be happier in other similar shoes such as the Adidas Boston Boost 6. If Adidas ever releases a second iteration of the Pureboost DPR they might have a great shoe on their hands.