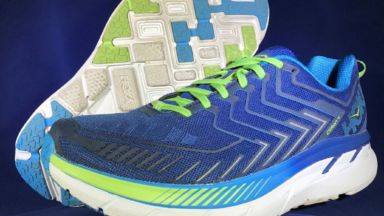 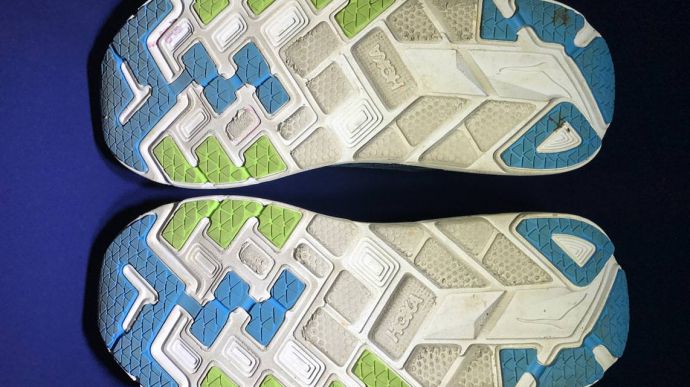 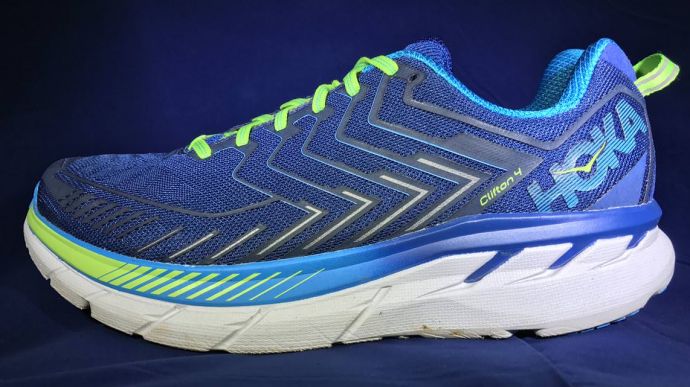 The Clifton 4 has improved upon an already smooth and cushioned ride by adding increased rebound in the midsole material.

Updates to the upper including a new mesh material are great improvements making this a solid update overall, and the best riding version of the Clifton to date.
WHERE TO BUY
LOWEST PRICE
$326
SHOE INFO
Hoka One One
Brand
Clifton 4
Model
Lightweight
Type
9.30 oz. (264 gr.)
Weight
130 US$
MSRP
5 mm
Heel Drop
Aug / 2017
Release Date
Clifton 3
Previous model
WHO IS IT FOR
I highly recommend this shoe to runners of all types and ability.
Help me choose

Hoka One One Clifton 4 General Info

Since the introduction of the original Hoka One One Clifton model the shoe has undergone many changes.

It started out as a shoe that weighed under 8 oz and provided so much cushion at that weight, it was actually hard to comprehend when you put it on.

Since then the shoe has undergone changes mostly in the upper materials and overall fit. The midsole material has undergone some minor tweaks but stayed very similar from year to year until now.

Hoka One One Clifton 4 – Lateral Side

The Clifton has been known for a marshmallow soft like ride. It’s one of the shoes biggest highlights. I was anxiously awaiting this shoes arrival so that I could put some miles on them and see how the ride is.

After Receiving the Clifton 4 the first thing I noticed is that it looks really good. This is mostly due to part of the midsole getting a paint job this year.

The first thing I did was take a look at the outsole. I see minor changes to the layout of the rubber. I depressed my thumb into the midsole material and was happy to find that the standard cushioning I’ve come to expect from the Clifton model is still there.

When putting the shoe on for the first time the fit feels familiar. The new mesh stands out for both aesthetics and breathability. It feels light on my feet and the cushioning feels plenty soft.

Hoka One One Clifton 4 Sole Unit

The midsole of the Clifton 4 is a one piece CMEVA foam. The base is slightly narrowed compared to the previous version. When looking down on the shoe you no longer see the midsole flaring out as drastically.

Hoka One One Clifton 4 – Medial Side

The shoe features a rockered design giving it a slight upward taper at both the heel and toe to smooth out the ride. The changes made to the midsole material are a big improvement over previous versions.

If you are used to the marshmallow like cushion of the Clifton line then you will not be disappointed.

Runners may notice a very slight change in the squish/marshmallow like feel on impact but will notice the incredible rebound capabilities of these changes even more. For those new to the Clifton model you can expect a lightweight highly cushioned and smooth ride.

The shoes updated midsole exhibits characteristics of Hoka One One’s RMAT material used in this years Hupana model. RMAT is a material that has excellent rebound properties.

This midsole material feels like its got the same properties as RMAT but with more cushion. Previous versions of the Clifton felt extremely plush, and the rockered design is what aided forward momentum.

You didn’t come to expect a huge amount of rebound from the shoe. The Clifton 4 has changed that. It gives you a ride that now more responsive in addition to being soft and smooth.

The changes of the midsole materials were made to increase the longevity of the shoe.

Previous versions have provided great cushioning but there were complaints about the material breaking down and eventually becoming compressed to the point where it was time for a new pair too early.

Everything I’ve seen so far in the Clifton 4 suggests to me that the new changes will accomplish the goal of added longevity.

The outsole has undergone mostly minor changes with one of them being very important for the durability of the shoe. It is comprised of strategically placed rubber and exposed midsole material.

The amount of rubber on the outsole is close to the same when you break it down but the layout has changed for the better. There is now a strip of rubber covering almost all of the lateral side of the outsole.

This covers the area that in previous versions was only made up of exposed midsole material and began to shred quickly. This is the area where most feet will strike the ground so it makes sense to have rubber covering it.

There is still one small exposed midsole area on the lateral edge and I have noticed slightly less breakdown of that area than in previous models of the shoe at similar mileages.

Hoka One One Clifton 4 Upper Info

Hoka One One Clifton 4 – Top

The upper of the Clifton 4 utilizes seamless construction and is comprised of a thin mesh material. Various sections of puff print overlays wrap around the upper.

The shoe fits similarly to last years version in terms of length. This means that if you had the Clifton 3 and it fit properly then you’ll be fine with the same size.

If you’re used to running in a Nike, Brooks, Asics, or New Balance shoe and are thinking about the Clifton 4 you should probably consider going up a half size.

Those other brands tend to have a little more length out of the box and the Clifton 4 will likely feel a little too short.

My size 10 fit well and that is the size I always run in but those preferring more room up front will need to size up.

The new mesh material has great breathability and is soft and comfortable. There are no seams that cause rubbing or areas of irritation in the upper. I do notice a slight widening of the midfoot fit.

The upper hugs your heel area very snug and then widens moving forward. I would not expect to notice a drastic change in the midfoot fit. In fact this may be a change you might not even notice if they hadn’t mentioned it.

Whatever they have done to change the fit, this is a very comfortable upper that holds your foot securely in place and breathes well.

The toe box of the Clifton 4 is very similar to the 3. For me and most people with a foot of average width it will be perfect. I often receive questions about every new version of the Clifton about the toe box and if it’s wider.

No it is not and I personally don’t think it needs to be. It leaves plenty of room for my toes to spread out. Fortunately for those requiring that extra width. The Clifton 4 will be offered in wide sizing for the first time ever.

Hoka One One Clifton 4 Conclusions

This is the first major update to the Clifton models midsole material and it is a great one. All of my worries about the potential for disaster in increasing the density of the material for longevity quickly subsided on my very first run in the shoe.

In fact on my very first run in the shoe I found myself quickly saying “Woah!” to myself about the rebound coming from a midsole this soft. This new model provides everything the old one did with an actual improvement in the ride.

One thing that I feel I need to address is the weight of the shoe. Since its inception the Clifton has steadily increased in weight.

I do not have an official weight for the production version of the Clifton 4 but I do have an estimated weight of around 9.3oz. That’s miles away (no pun intended) from the original Clifton’s introduction at 7.9oz.

It no longer has that WOW factor of being incredibly lightweight while providing ample cushioning. It doesn’t feel heavy on your foot but it is something to consider if weight is one of your main concerns.

For me the changes in this update and improvement to an already great ride are worth the increase in weight. It still provides a more cushioned ride than any other shoe on the market for its weight.

It feels slightly more cushioned that the recently released Hupana.

Overall I would suggest this shoe to anybody looking for a highly cushioned ride that’s both springy and smooth. The Clifton 4 still feels light on your foot just as other Clifton models have in the past.

It is now the shoes impressive ride that stands out more than anything. Hoka One One has improved upon the ride of a shoe that I didn’t know could be improved all that much.

Having tested every version of this shoe I believe that this is the best version of the Clifton we have seen.

Whether you are new to the Clifton model or have run in previous versions this is a shoe worth considering as both an all around daily trainer and racer. This will be my go to shoe for racing in the fall.

We thank the nice people at Hoka One One for sending us a pair of Clifton 4 to test. This did not influence the outcome of the review, written after running more than 50 miles in them.

Hoka One One Clifton 4 Price Comparison

Visit ShopAmazon.com
Sorry - Product not found. Please try RunningWarehouse.Com to check in their assortment.
This page contains affiliate links. As an Amazon Associate I earn from qualifying purchases.
WHERE TO BUY
LOWEST PRICE
$326

Similar shoes to Hoka One One Clifton 4

Hoka One One Clifton 4 Review