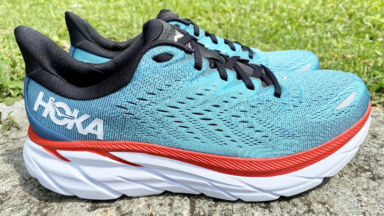 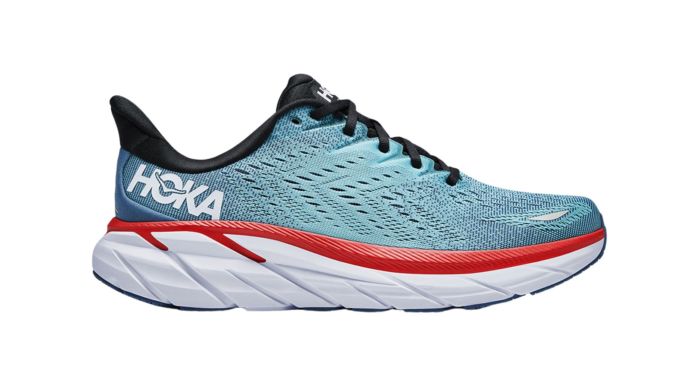 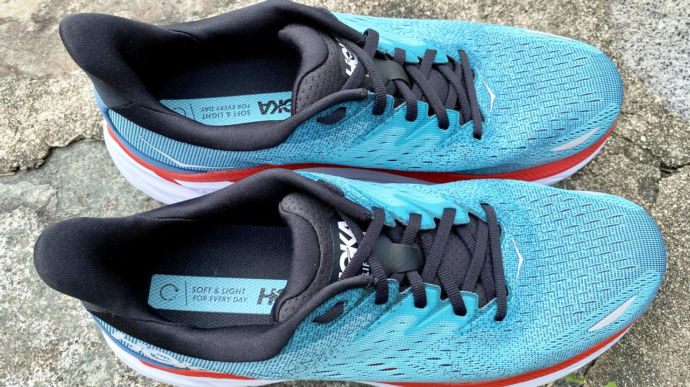 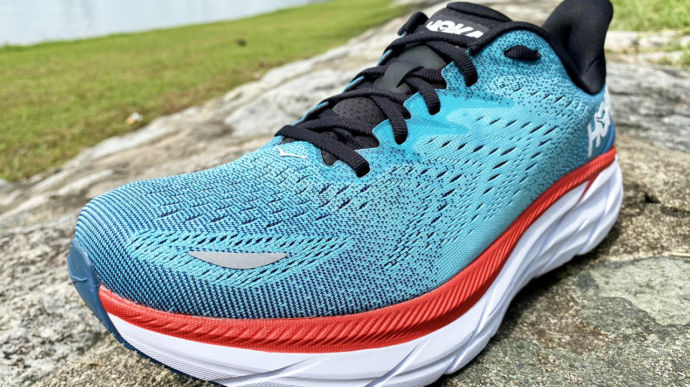 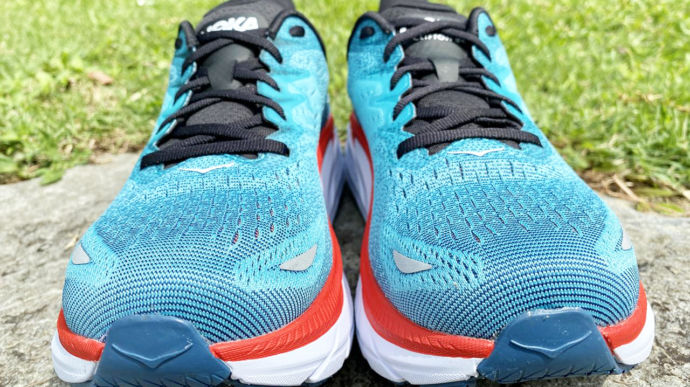 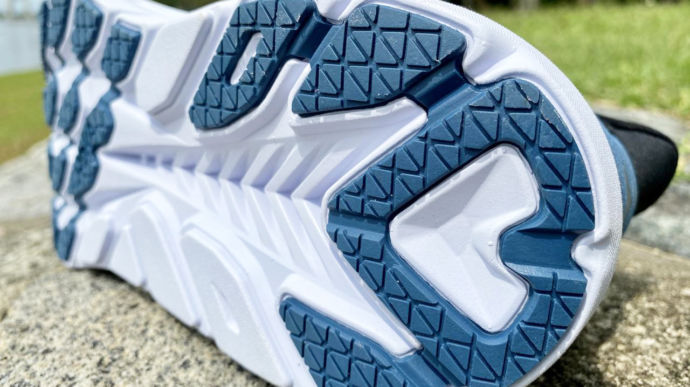 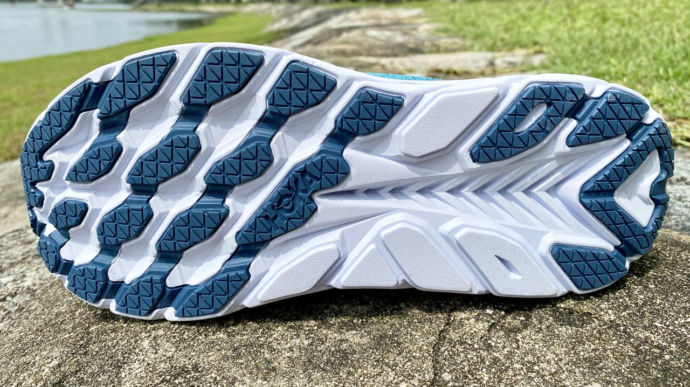 The Hoka One One Clifton 8 is a multi-purpose daily trainer with a smooth and stable ride. Its rocker midsole eases you through transitions and saves you energy over long distances.

Version 8 has a more padded tongue, better outsole rubber placement and it has a slightly faster feel because of its stiffer forefoot.
WHERE TO BUY
LOWEST PRICE
$0
SHOE INFO
Hoka One One
Brand
Clifton 8
Model
Cushioning
Type
8.9 oz. (252 gr.)
Weight
130 US$
MSRP
5 mm
Heel Drop
Clifton 7
Previous model
WHO IS IT FOR
If you're a runner looking for a highly cushioned, versatile daily trainer and you don't mind a bulky silhouette, the Clifton 8 is the shoe for you.

The Clifton 8 has a comfortable upper but it has a bucket seat foot frame which results in a prominent arch sensation.
Help me choose

Hoka One One Clifton 8 Intro

The Clifton is named after the beautiful Clifton Beach in Cape Town, South Africa which has majestic blue water and soft, white sand.

Nicolas Mermoud, the co-founder of Hoka One One came up with the idea for the Clifton when he was running down the slopes of Table Mountain down to Clifton Beach.

He wanted to design a shoe that would make him feel like he was flying down the mountain; he wanted a feeling of weightlessness and freedom.

He achieved exactly that with the first version of the Clifton: it was lightweight, soft and responsive all at the same time.

In the years that followed, Hoka changed the Clifton drastically. The versions that followed were nothing like the first version, the shoe that put Hoka on the map.

Recently, the Clifton 6 and 7 went back to the Clifton’s roots and were vast improvements in fit and ride. Version 7 was the best Clifton to date.

The Clifton 7 was launched in August last year. Now, only 9 months later, the Clifton 8 has been launched.

Hoka One One Clifton 8 – Toe+Lateral

When the Clifton 7 came out back in August, it was one of the softest running shoes on the market with that signature Hoka, marshmallow-soft ride.

I really enjoyed using my pair for easy and recovery runs towards the end of the week when my legs were sore from a full week of high mileage.

I stopped using the Clifton 7 when newer, bouncier and softer trainers hit the market and dethroned the Clifton 7 as the King of Max Cushioning.

The Nike Invincible Run is now the softest trainer on the market and its full-length ZoomX midsole is ridiculously bouncy and uber soft at the same time.

The New Balance Rebel V2 is also a softer shoe than the Clifton 7 and its super critical midsole foam results in an extremely light but also cushioned trainer.

The Clifton 8 hopes to take back the crown with its brand new midsole, outsole, and upper. The Clifton has a new midsole foam which is still CMEVA (compression molded ethylene-vinyl acetate) but is 15% lighter than the Clifton 7’s midsole foam.

So does the Clifton 8 with its newer midsole foam have what it takes to take back the crown of the King of Cushioning?

Hoka One One Clifton 8 First Impressions

Hoka One One Clifton 8 – Top

I normally buy the wide version of the Clifton. It’s more widely available than the regular D width and some countries only bring in the wide version due to the notoriously narrow fit of Hokas.

This time, I decided to try the regular width. The regular Clifton looks like a completely different shoe to the wide version: it’s more agile, nimble, and doesn’t have the boat-like silhouette of the 2E wide.

However, when I tried it on for the first time, I thought that I had made a mistake going for the normal version.

The “bucket seat” poking arch sensation is usually present in Cliftons but this time it was amplified and walking around in the Clifton 8 was very uncomfortable because I have flat feet.

Luckily, when I started running in it, the uncomfortable, prominent arch sensation disappeared.

I decided to take the Clifton 8 out on an easy 40 kilometer run for its maiden voyage. I was shocked by how firm the new midsole felt. To me, it felt firmer than the Clifton 7.

Halfway through the run, it started to pour and the Clifton 8’s absorbed a lot of water. The roads and pathways became waterlogged but the traction of the Clifton 8 was fantastic and I never felt like I was going to slip.

The Clifton 8 felt more versatile than the Clifton 7.

It was easy to pick up the pace and go under 5 minutes per kilometer because of its midsole that wasn’t overly soft and the rocker shape of it which made transitions less sluggish.

After the first long run, I was pleasantly surprised by how effortless the run felt. The high level of cushioning meant that at the end of the run, my legs still felt fresh.

Hoka One One Clifton 8 Sole Unit

Hoka One One Clifton 8 – Sole

The foam density of the Clifton 8 now feels like the perfect balance between soft and firm.

The thick stack of foam has more than enough cushioning for a full marathon while it doesn’t overly compress so you don’t feel like you’re fighting with the shoe over long distances.

I mentioned in my review of the Nike Pegasus 38 that the ride of it feels very “old school”.

The Clifton 8 is cut from the same cloth as the Pegasus 38 because the ride feels like a throwback to the shoes of yesteryear which don’t have the same level of energy return as shoes with modern-day super foams.

During rearfoot strikes, these sidewall grooves allow the foam under the heel to compress more, which makes the shoe feel more cushioned.

Hoka One One Clifton 8 – Heel Closeup

It’s easier to pick up the pace in the Clifton 8 and it feels more like a do-it-all daily trainer whereas the Clifton 7 felt like a strictly easy/recovery run shoe.

In my time of testing, I used the Clifton 8 for long runs, recovery runs, easy runs and steady runs and it could handle all of them without making any run feel like a chore.

The base of the Clifton 8 is very wide so foot strikes always feel planted. The sidewalls are also raised so they guide your feet and keep them centred. The Clifton is a very stable, neutral trainer with a prominent arch.

What makes the Clifton 8 feel more efficient than other daily trainers like the Pegasus 38 and the Cumulus 23 is its rocker-shaped midsole.

It has a high toe-spring which makes transitions quicker because you roll forward and save energy.

You get a thick, Ortholite insole in the Clifton 8 and this adds an extra spongy layer of step-in comfort and extra cushioning.

The outsole is a solid update. The strategically placed rubber now extends further forward on the high wear area on the outer lateral heel which leads to an increase in durability.

On the Clifton 6 and 7, the outsole rubber didn’t extend far enough into the midfoot on the lateral sides, so the exposed midsole foam got demolished by the ground because of how I foot strike. This doesn’t happen on the Clifton 8.

The forefoot lugs and grooves are also diagonal now instead of horizontal. This makes the forefoot feel stiffer and gives the Clifton 8 more pop during transitions because there is more resistance when the shoe flexes.

There is still exposed midsole foam on the midfoot and a shallow arrow shaped cavity that extends from the heel into the midfoot but it doesn’t change the ride much compared to the Clifton 7.

Hoka One One Clifton 8 Upper Unit

Hoka One One Clifton 8 – Toe

The upper of the Clifton 8 is 98% similar to the Clifton 7. The main differences are that the tongue is more padded and the inner lining is now a smooth, shiny material.

It’s a very comfortable upper that doesn’t feel overly padded. There are no hotspots and the toe box is the perfect height.

The padded tongue is gusseted and I found it a little too short because it slides downwards during runs.

The lacing area of the Clifton 8 is more comfortable than the Clifton 7 because of the extra padding in the tongue but it adds some extra weight.

I would have preferred the same level of tongue padding as the Clifton 7 because it was never a problem and the extra padding makes the Clifton 8 heavier and warmer.

There are double last row eyelets provided which I had to use in order to do heel lock lacing to prevent my heel from slipping.

A benefit of going with the normal width over the wide, is that the laces are the correct length. In the wide version, the laces are so long that when they are tied, they touch the ground.

For me, the fit was true to size but I have very narrow feet. I think that most runners will need to opt for the wide version because the normal D width has such a narrow fit.

You also get reflective pieces on the back of the heel and on the sides of the toe box which is a bonus.

Hoka One One Clifton 8 Conclusion

Hoka One One Clifton 8 – Heel

When the Clifton 1 first came out, it was an exciting, fun shoe but it had some teething problems. Now, it feels more mature, more polished and more consistent.

However, newer, more exciting daily trainers have invaded the cloud-like cushioning space that the Clifton occupies and have made it feel slightly dated.

What sets the Clifton 8 apart from other daily trainers in its price range is its Meta-Rocker midsole that makes long distances a pleasure.

The Clifton 8 is also one of the most cushioned daily trainers you can buy even though it’s not one of the softest anymore.

Now some might accuse Hoka of not innovating. They continue to use a good old EVA foam midsole in the Clifton which doesn’t have great energy return and it also isn’t super light.

However, in the past, some of the Clifton versions have been accused of straying too far from the successful template set out by the first version.

The Clifton 8 on the other hand has a very similar ride to the Clifton 7 but with a more comfortable upper and greater versatility thanks to its stiffer forefoot which makes it feel more snappy.

Hoka has finally given the people what they want, a high level of consistency when it comes to the Clifton series.

We purchased a pair of Hoka One One Clifton 8 from runningwarehouse using our own money. This did not influence the outcome of this review, written after running more than 50 miles in them.

Hoka One One Clifton 8 Price Comparison

Visit ShopAmazon.com
This page contains affiliate links. As an Amazon Associate I earn from qualifying purchases.
WHERE TO BUY
LOWEST PRICE
$0
AVAILABLE ON SALE:Previous model $149

Similar shoes to Hoka One One Clifton 8