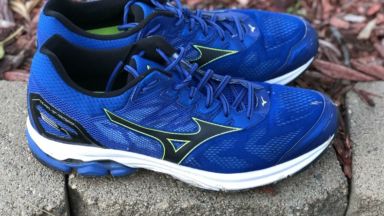 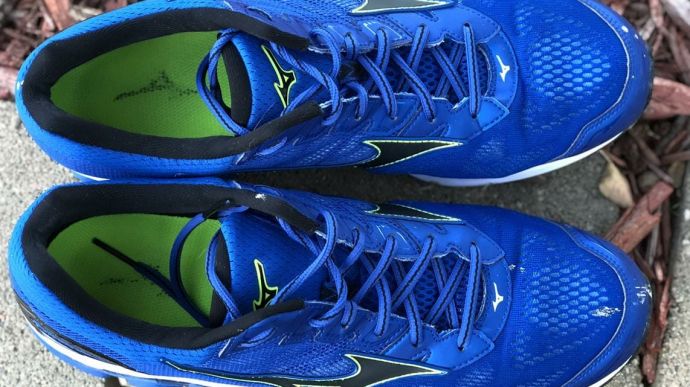 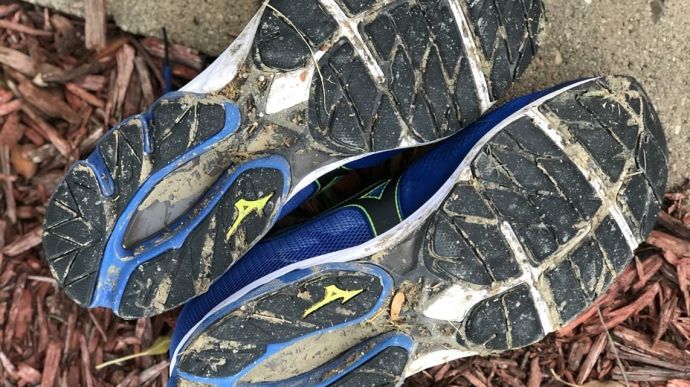 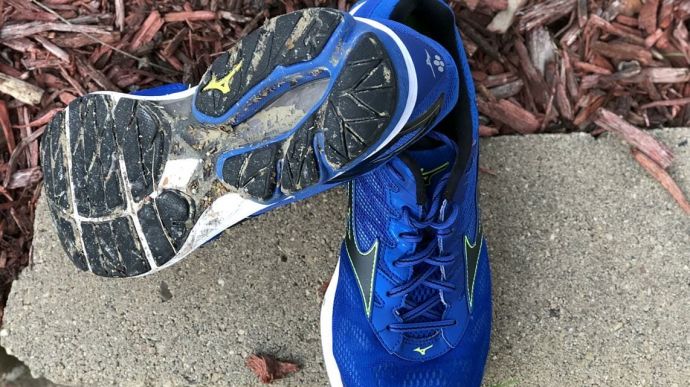 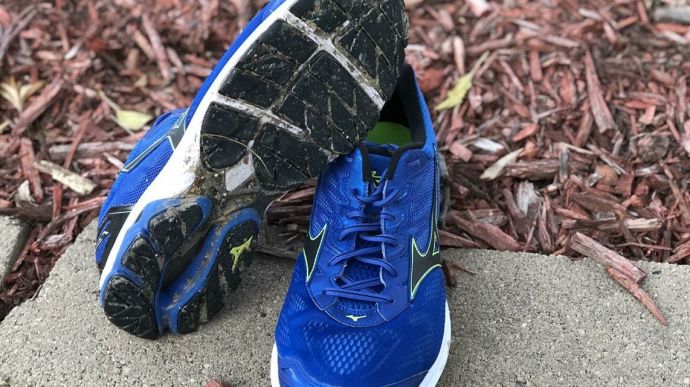 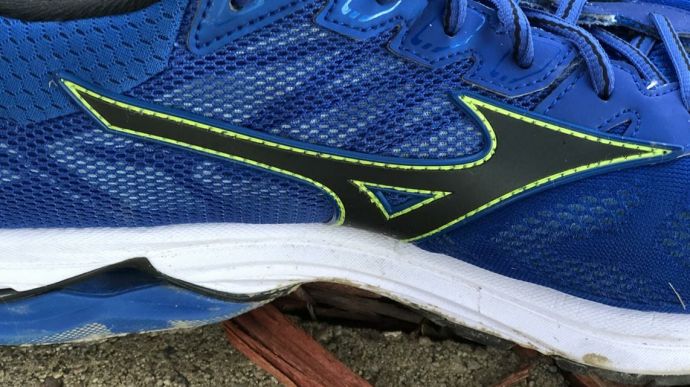 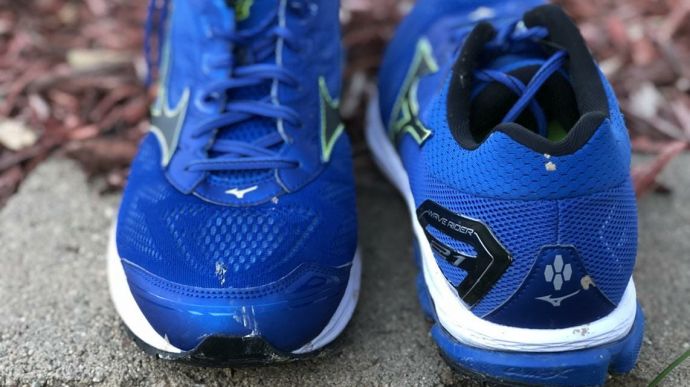 The Mizuno Wave Rider 21 is a high-mileage trainer that keeps the main features that made the 20 work. Priced well, this continues to be Mizuno's Go-To Shoe.
WHERE TO BUY
LOWEST PRICE
$34
SHOE INFO
Mizuno
Brand
Wave Rider 21
Model
Cushioning
Type
10.10 oz. (286 gr.)
Weight
120 US$
MSRP
12 mm
Heel Drop
Mizuno Wave Rider
Family
Wave Rider 20
Previous model
WHO IS IT FOR
This shoe is great for almost all runners. However, a truly heavy-set runner should probably seek out softer cushion.
Help me choose

The Mizuno Wave Rider 21 the most popular shoe on the Mizuno neutral line. It is a shoe that you’ll find on many people’s feet.

Just like the past year’s model, this one hits a nice sweet spot for Mizuno’s technology. It is light-weight for the cushion and technology, giving you a smooth ride for most of your runs.

Although other shoes offer more of Mizuno’s signature technologies, this shoe is easily the line that is most popular.

At this price point, the Riders compete with Brooks Ghosts, Nike Pegasus, Asics Cumulus or Saucony Ride. Having run in this year’s Ghosts and Rides, I would say that these shoes are lagging behind each of them slightly.

The cushion is much firmer than the other too offerings, and seems to wear out earlier on the long runs.

Upon receiving the Riders, I loved that the sole unit was unchanged form the previous model, and intrigued by the update of upper.

When I put them on for the wear all day test, they were a great. They held up to a full day of teaching. And on the first run — a 10M long run — the responded fairly well and were pleasant for most of the miles.

The sole unit of this shoe is completely untouched from last year’s model. Using the springy “CloudWave Plate” and the “U4icX” midsole, the shoe provides a firm cushioned feel with a slightly softer toe off.

The unit showed enough cushion and responsiveness that I felt comfortable running in them for half marathon distances without a second thought.

With plenty of cushion under foot (30mm heel, 18 mm forefoot) and a standard 12mm drop, these are in line with most popular offerings.

The actual sole of the unit offers decent grip, but not nearly comparable to that of the Ghosts. They never slipped, but there were a couple of times where I felt a little give on the concrete.

When compared to the sole units of other offerings at the same price point, I would say these are on the top half, but this year they just seemed too firm to be as good as the Rides or Ghosts.

This firmness leads to great responsiveness and quick turnover which was wonderful for speed, tempo and race conditions from 1 mile up to half marathon distance.

The upper on this offering has been updated from last year’s model. The 21s include a new sock liner on the inside of the boot and less stitching on the outside of the upper.

The dual layer upper is comfortable and very breathable. This year’s upper is much more breathable than was the 20s. However, I’m not 100% sure I like that.

During some hotter runs, it was nice. However, I never thought the 20s lacked breathability, and the 21s let in A LOT of cold air during cold runs.

This meant I had I to make sure my sock choice was the right one before leaving the house.

The overall feel of the upper is still a good one. It fits true to size and while not “roomy” it is not narrow either. With a middle-level width, it grabs your feet but doesn’t seem to put pressure in any one spot.

The laces do a good job of locking your feet in while not putting too much pressure on the top of your feet. And the padded tongue locks in well and protects that portion of your feet.

Overall, this shoe is a very good offering for most runners. A firm, but cushioned feel, this shoe can help push you forward on speed and tempo runs.

They ride firm and fast, and while pushing tempo, they were great. But something about the 21s didn’t hit the same chord that the 20s did for me last year.

I was a little underwhelmed by the upper, and disappointed how cold my feet got during a few runs — the temps weren’t even that cold, around 20-25 degrees.

I guess where I feel it is the best to put to the question is when comparing them to the other $120 flagship shoes I have reviewed this year.

And the Rider 21s just don’t stack up to the Saucony Rides or to the Brooks Ghosts … or even the Skechers GOrun5 from early in the year.

The Rides were light, and plush. Great for tempo and long runs. The GOruns were super light and springy, a truly surprising shoe.

The Ghosts are the best all-around running shoe I have worn, firm but cushioned enough for 20+ mile runs, able to handle speed and miles. All three of these would be shoes I would recommend before the Rider 21s.

In the end, the Rider 21s are very solid shoes. And well worth a look. But I just don’t think they stack up compared to some of the other offerings on the market.

We purchased a pair of Mizuno Wave Rider 21 from runningwarehouse using our own money. This did not influence the outcome of this review, written after running more than 50 miles in them.

Visit ShopAmazon.com
This page contains affiliate links. As an Amazon Associate I earn from qualifying purchases.
WHERE TO BUY
LOWEST PRICE
$34
AVAILABLE ON SALE:Previous model $149