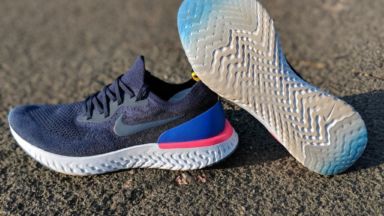 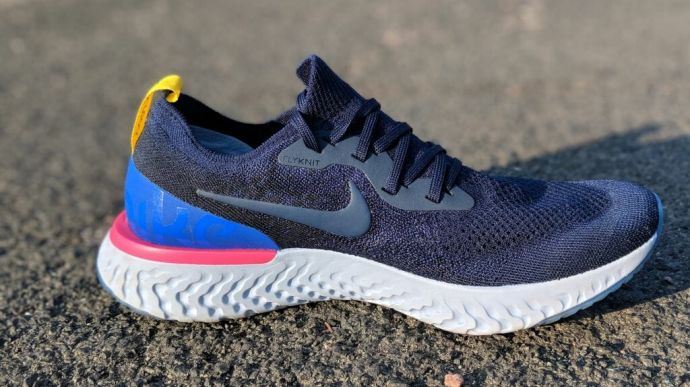 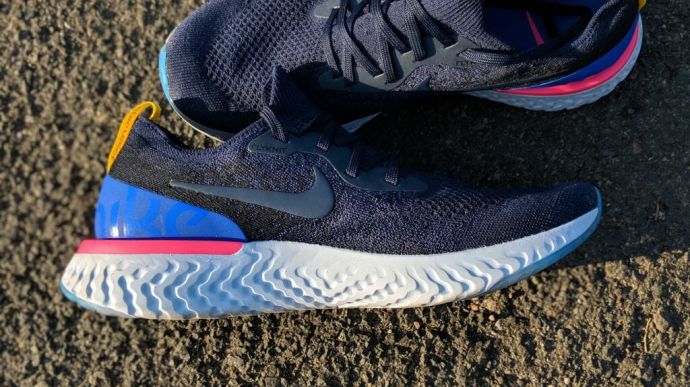 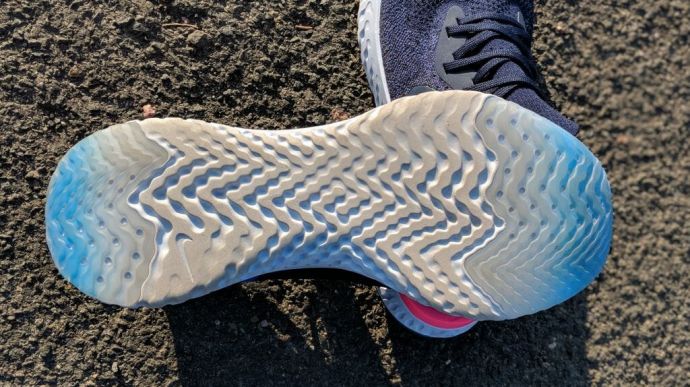 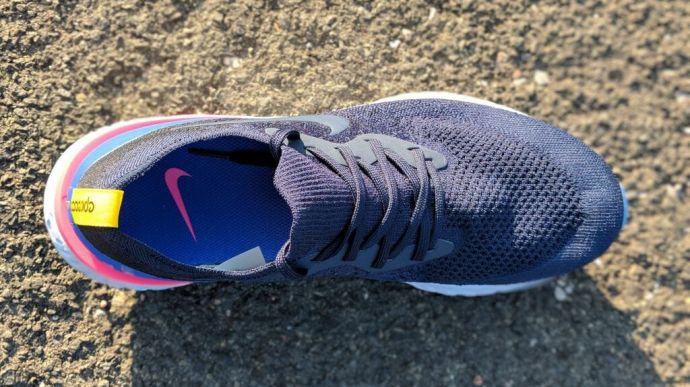 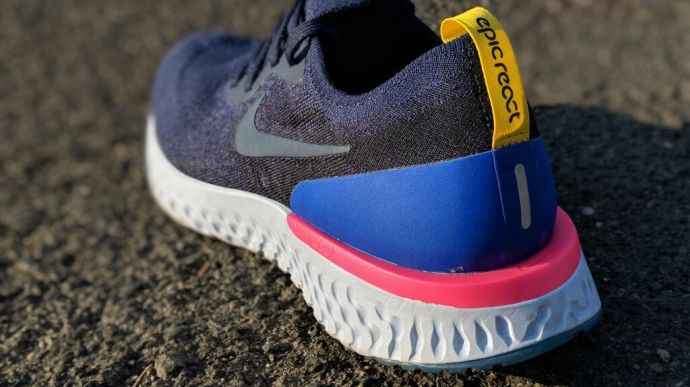 The Nike Epic React is a lightweight all around daily training shoe that can take on every workout you can throw at it; from long runs to speed work on the track. With a form fitting FlyKnit upper that seems to conform to the foot after several runs, the Epic React is designed to last more than the conventional 500 miles, touting incredibly durable Epic React foam.
WHERE TO BUY
LOWEST PRICE
$95
SHOE INFO
Nike
Brand
Epic React Flyknit
Model
Lightweight
Type
8.4 oz. (238 gr.)
Weight
150 US$
MSRP
10 mm
Heel Drop
Feb / 2018
Release Date
WHO IS IT FOR
The Epic React really is a shoe for any runner, whether it be the casual hobby jogger or the elite runner aspiring to the Olympic Trials, this is Nike's best training shoe ever. The FlyKnit upper has a very form fit feel, but it does stretch enough for runners with wider forefeet. The midsole Epic React midsole is the best blend of soft, but responsive, that any company has come up with, and If it truly lives up to its advertised durability, then its not a bad investment either.
Help me choose

Any time that I see a new running shoe touting proprietary technology, whether it be a new foam or upper material, I usually yawn and look towards the tried and true shoes I’ve been able to run into the ground (i.e., past 500 miles).

However, I’ve been surprised several times in the last decade.

New Balance’s Revlite foam, recently re-released in the well deserved 890 series comes to mind, as does Nike’s own Lunarlon foam which featured prominently in such great shoes as the LunarRacer.

However, no company has been able to surpass the impact of Adidas’ Boost foam. Comprised of TPU pellets compressed into a highly durable and resilient bed of cushioning heaven, Boost foam has worked extremely well in midsoles from marathon racing flats to heavy and super cushy daily trainers.

Nike React foam is the first midsole foam to actually compete with, and possible surpass, Adidas’ Boost foam in terms of feel while running and through the transition of foot strike.

Additionally, if the durability claims are genuine (these could not be verified with such a short review time for this review) then they will be as, or more, durable than Adidas’ flagship technology.

In August of 2017 I reviewed the Nike VaporFly 4%, Nike’s $250 marathon racing flat which featured Nike’s proprietary Zoom X foam. With the success of that shoe, I fully expected Nike to create an entire new line of running shoes based on Zoom X foam. However, Epic React foam is a completely different animal, and I see the merit of it as a great all around trainer/ do everything running shoe.

Reportedly, this foam underwent more than four hundred trials until they came up with the perfect blend, and it is hailed as lasting well over 500 miles and feeling like new underfoot.

After such a pleasant experience in the VaporFly 4%, I was really excited to get this shoe. But, after being around the running shoe industry in various capacity since the late 1990s, I was very skeptical about the hype.

After unboxing and seeing the expectedly pleasing aesthetics which Nike typically dials in, but I don’t care about, I was surprised at the underfoot feel which felt more firm than I was expecting. While I appreciated the marshmallow feel of the lunar foams, in all of their iterations, I never felt like they were that performance oriented.

With the Epic React foam Nike is directly taking on such obvious competitors as Adidas, but also setting the bar just a bit higher.

In full disclosure, for those readers that accused me of payola with the Nike Vaporfly 4% review, I want put some of my feelings about Nike out there. In college I was given free Nike shoes competing in cross country and track and field for a Division I university that was sponsored by Nike. I felt that there product was so poor that I typically traded in these free shoes for trainers from other brands at the local running store I worked at.

I’m not a fan of some of their decisions as a company, but thats not what I’m here for. I do not receive free gear or compensation of any kind from companies like Nike, to ensure we can give honest and unbiased reviews of the latest and greatest running shoes on the market.

As stated before, Epic React foam is an incredible combination of responsive propulsion mixed with just-soft-enough comfort. With a relatively high stack height one may think the Epic React is a maximal shoe, but this is entirely wrong. I found this to be a great trainer for uptempo days and fast running, and the standard 10mm heel drop (28mm in heel 18 in forefoot) on the Epic React feels less significant than it does on other Nike trainers such as the Pegasus or Vomero.

So, how does the Epic React foam feel underfoot? Firm, but soft. Cushy, but surprisingly squishy. Its the kind of underfoot comfort that feels great at all paces, and the transition from heel to toe feels very smooth.

As a neutral shoe, I never felt like my foot was being tracked into a specific foot-strike. The midsole doesn’t feel like its too cushioned or under cushioned at any place underfoot. As a mid-foot striker I always appreciate more cushioning in the forefoot area and this is where a lot of shoes suffer, in my opinion, by placing a very firm material in under the forefoot.

The overall platform of the Epic React also feels wide and stable while still remaining a neutral ride and this improved the feel when running smooth trail with lots of turns or taking a 45 degree turn on the roads.

So, how is the React foam feel in comparison to its closest competitor, Adidas’ Boost foam? Overall, the React midsole feels more functional and versatile, with the same overall feel throughout the midsole. I think that this is probably because it is made from one piece of foam, rather than foams of various durometer glued together in different areas of the midsole.

To me, this is what truly sets the React foam apart from anything else out there on the market. From a cushioning to weight ratio, the Epic React blows away a shoe like the Adidas Supernova Boost which weighs almost three ounces more per shoe, and the Epic React feels great at fast paces.

The outsole of the Epic React is the only place on the shoe that I’m left with lingering reservations. A more durable, clear rubber, is placed only on the back of the heel and the front of the toe box, for added traction more than durability, and I’m concerned about the longevity of this shoe with so much of the midsole foam exposed. The outsole (with exposed midsole) looks like a piece of art, and the smooth lines and contours of the popping white midsole really make this an aesthetically pleasing shoe.

Most runners are familiar with Nike’s Flyknit uppers which provide a one piece, seamless, and sock like fit. I really feel like Nike nailed down the tightness and width of the Flyknit on the Epic React without making it too tight or too loose. I have a wider forefoot with a bunion on my big toe, and the Epic React’s flyknit did feel tight at first on the top of my foot. However, after three runs, the Flyknit seemed to mold to my foot and this is a more accommodating shoe to me than the Pegasus or the Structure in the Nike line.

A somewhat odd feature in the upper/ heel cup area of the Epic react is a thin rubberized overlay on the outside of the heel cup that seems held in place by a rigid thermoplastic piece that wraps around the heel (see the pink plastic piece in photos). I thought that this would be a design flaw in the shoe when I first put it on as the heel felt rigid and the thin nature of the heel collar felt like it could cut into my achilles. This all disappeared once I got running and it never bothered me. In fact, I think that the rigid plastic piece adds a touch of much needed structure to what would probably be too flimsy of a heel cup in it’s absence.

Another aspect of the Flyknit upper on the Epic React is that it seems much more durable than any other Flyknit shoe I’ve worn. I hope this means its made to last as long as the midsole, but I fear that it will feel a bit hot once the temperatures heat up. The warmest temperature I tested the Epic React was about 55 degrees Fahrenheit, and my feet did not feel hot.

What Nike accomplished last season with the Vaporfly 4% marathon racing shoe, so have they done with the Epic React training shoe.

They’ve raised the bar for their competitors by creating proprietary foams that feel different, and better, than anything else that is out there on the market. In the case of the Epic React, Nike has really done this without breaking the bank, especially if the durability claims are true.

With such a short testing period of one week I was able to put five runs in the Epic React ranging from short treadmill runs with hills and speed work, to an eight mile easy run that got progressively faster. The Epic React is just plain fun to run in.

From an aesthetic standpoint, this shoe is artful, and I think that it will stand as a classic in both design and aesthetic. But frankly, I couldn’t care less. I’m a runner and I value functionality, comfort, and durability.

The Epic React has all three in spades, and Nike has managed to create a real running shoe that will please both the high mileage marathon crowd and the weekly jogger alike. Bravo Nike. Well done indeed.

We purchased a pair of the Nike Epic React Flyknit at Running Warehouse with our own money. This did not influence the outcome of this review, written after running more than 50 miles in them.

Visit ShopNike
This page contains affiliate links. As an Amazon Associate I earn from qualifying purchases.
WHERE TO BUY
LOWEST PRICE
$95