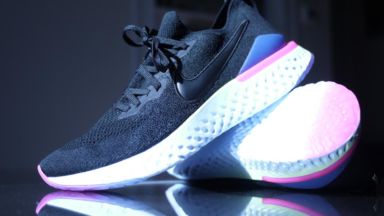 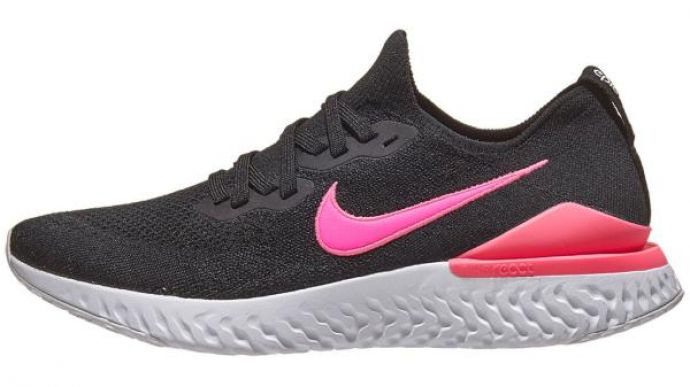 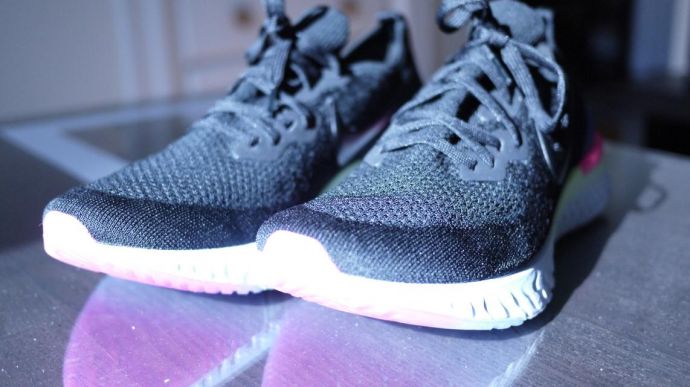 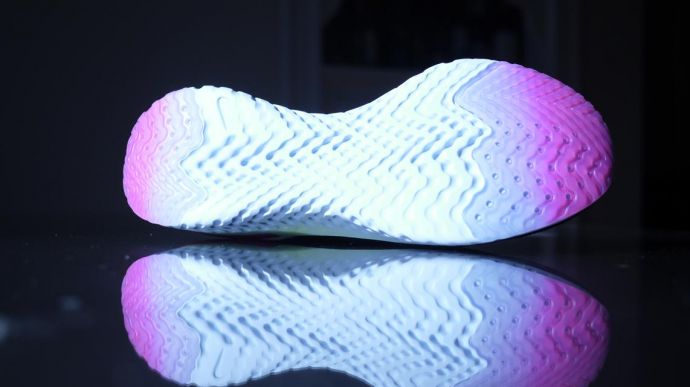 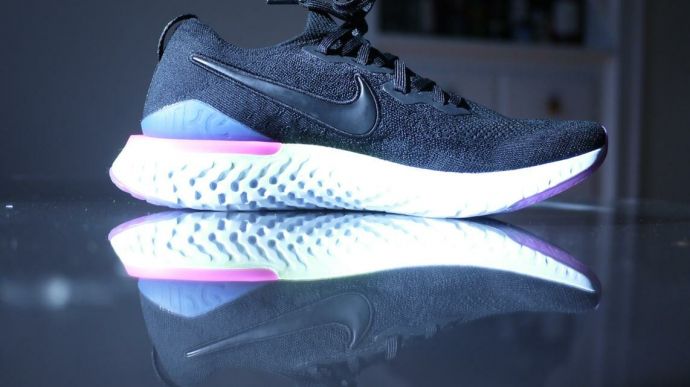 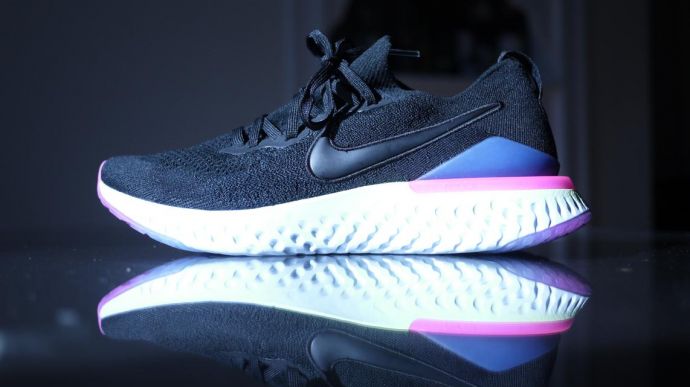 Nike’s Epic React Flyknit 2 shoe brings a lot to the table and it all comes together to give runners of all levels a quality daily trainer. It’s a pricey daily trainer, but most will find it’s worth the extra cost.
WHERE TO BUY
LOWEST PRICE
$150
SHOE INFO
Nike
Brand
Epic React Flyknit 2
Model
Cushioning
Type
8.7 oz. (247 gr.)
Weight
150 US$
MSRP
10 mm
Heel Drop
Epic React Flyknit
Previous model
WHO IS IT FOR
Anyone not satisfied with entry-level trainers who needs a shoe that keeps up with fast workouts, long runs, and some daily gym activities should look into this shoe.
Help me choose

Nike put a bunch into this shoe, from the React Foam (based on a thermoplastic elastomer/TPE foam which is overall better than standard EVA foam), to the improved flyknit upper.

The Epic React Flyknit line is still a light shoe at 8.4 ounces in size 10, even with a sizable 27mm hee and 18mm forefoot.

Similarly priced shoes with energy efficient foam and a woven or specialized upper would be the Adidas UltraBoost 19 (10mm drop, $180, 10.9 ounces).

The Epic React Flyknit 2 running shoe sits in the top edge of the pricing lineup for existing running shoes.

It’s approaching the elite racing shoe like the Vaporfly 4% Flyknit, and it’s far from an entry level shoe like the Revolution 4.

Nike wants this shoe to appeal to the runner who wants better than average in both performance and looks.

If you’re someone attracted to the React foam but don’t care for the Flyknit upper or midsole design, go for the Legend React and save $50 or so bucks.

If you’re still in the middle of the market deciding which shoe to go with, you should check out the Air Zoom Pegasus and the Free line of shoes.

The Air Zoom Pegasus is a very established line of from Nike with proven tech built on a familiar platform for daily training.

So the Epic React Flyknit 2 is pushing a newer type of foam and design that the Air Zoom Pegasus doesn’t capture.

The Free line of Nike shoes covers the area of shoes that are designed to connect you to the running surface and emulate a more minimalist feel while the Epic React Flyknits are more focused on giving you a smooth ride with a comfortable upper.

I got this pair of shoes with the Adidas Ultraboost 19 shoes, so my testing not only included seeing how good this show was, but seeing how it stacked up against one of it’s bigger competitors.

I had also just tested the Nike Legend React shoes which are pretty similar on paper, so I was extra curious on how well the Epic React Flyknit 2s would do (Nike, can you make shoe names a little longer? haha).

Lacing up the Epic React Flyknit 2s was snug. Quite snug. I almost thought I should go up half a size, but settled my heel into the back of the shoe and got a decent fit in.

I would advise anyone that likes a roomy feel or anyone that needs this shoe for long distance running to try a half size up.

I was happy though with my normal size after I got the fit figured out. Read on to hear how everything felt after 50+ miles of running around!

React foam makes a difference. I would describe it as a springy bounce that resembles almost a rubber rebound that doesn’t get in the way of your stride.

During longer workouts, I would sometimes notice the extra bounce provided by the React foam.

Since the shoe also had a pretty sizeable forefoot and heel stack, I could slam my feet into the ground without bottoming out the shoe as well (something heavier landing runners might want to know about).

Sometimes when you have a large heel and forefoot stack, the shoe starts to feel sloppy (like the Ultraboost 19 shoes), but this was not much of a problem thanks to how Nike paired the sole with the upper.

The sole itself is pretty simple, with just React foam making up the forefoot to the heel with no other tech/foam/composites in the way.

Only exception is the plastic block surrounding the heel counter which I’ll describe in the upper section.

The sidewalls of the shoe have a light impression of a wiggling circle which become more pronounced as you look at the bottom of the shoe on the outsole.

Since Nike is using a durable foam, they’re taking advantage of this by keeping much of it exposed under the midfoot, and texturing it enough so it adds to the overall traction of the shoe.

The rest of the outsole below the forefoot and heel are covered in a layer of durable rubber with the same pattern pressed into the foam.

Nike made the channels of this pattern blend into the rubber which is slapped onto the toe and heel of the shoe to help improve long-term durability.

Enough for traction, keeps the shoe light, and Nike mixed in some colors to this rubber mix to make it stand out.

Over my 50 miles of testing, the outsole held up well, so I suspect these shoes should last at least a few hundred miles before you see signs of the rubber wearing down to the foam.

If you like Flyknit, you’ll like how Nike used it on this shoe. Although it looks like a similar implementation to the predecessor, there are a few changes.

I mentioned how the shoe felt tight at first, but fit true to size after I fiddled with how my foot was laced up into the shoe.

This is mostly because Nike redid their flyknit design from the predecessor a bit to form to the foot better.

You’ll see the area around the heel is shaped to move up the top of your foot and still have a close fit around the top of the shoe.

The thread choice for the upper was also pleasant, as it wasn’t too flexible where you’d find yourself drifting off the sole.

This thread/fabric felt more like a rugged sock surrounding your foot which could be tightened effectively with the flat laces.

Since there were no overlays besides the Nike Logo, the shoe is pretty breathable and felt great for all my runs.

Speaking of that Nike logo, it’s unnecessarily rugged! Nike has basically embroidered on a plastic logo which guarantees that logo will be visible long past the rubber on the outsole disappears.

I would have preferred a tiny amount of weight savings + cost savings for Nike to redo their logo with a printed version (similar to the Zoom Fly Flyknits).

What stands out on this shoe versus most other Nikes (and even other brands) is the solid plastic plate that connects the upper to the sole around the heel.

It’s partially a heel counter for heel stability and fit, and also a way to make the shoe more responsive. I’ve only seen this exaggerated plastic heel counter that extends past the rear of the heel in the Adidas SolarGlide shoes.

I began reviewing this shoe thinking it was yet another eye-catching “athletic” shoe that does a better job at filling up your instagram than filling up your track goals, but was relieved when this shoe kept up during all workouts.

If you get the fit right, like the design, and want the benefits of Flyknit, this shoe could be solid choice for a daily trainer for you.

However, most of the shoe’s benefits reside in the React Foam, and you can get the Legend Reacts for almost 1/3rd less.

So in summary, check these shoes out if you’re looking for something above average and don’t mind the extra costs for the looks.

We purchased a pair of Nike Epic React Flyknit 2 from runningwarehouse using our own money. This did not influence the outcome of this review, written after running more than 50 miles in them.