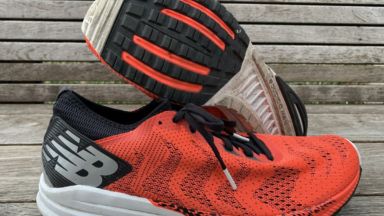 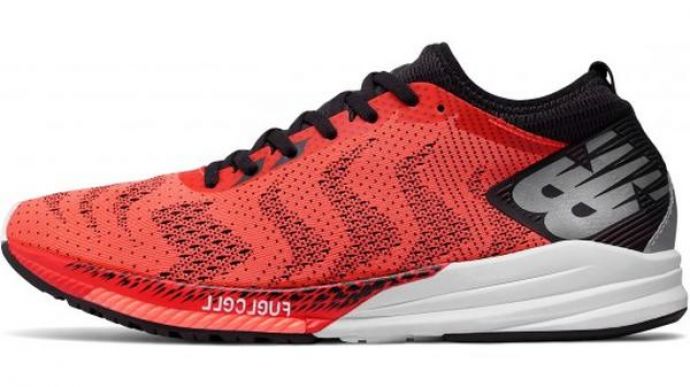 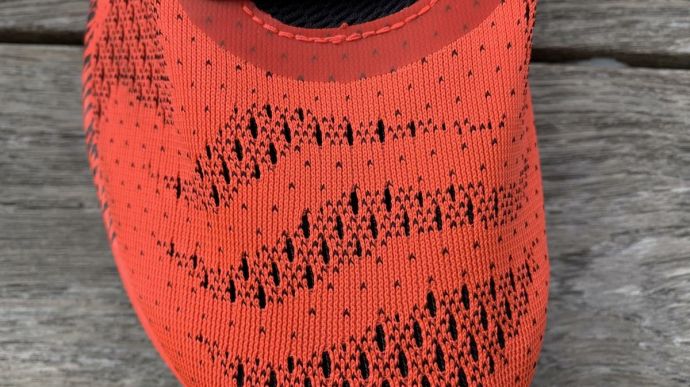 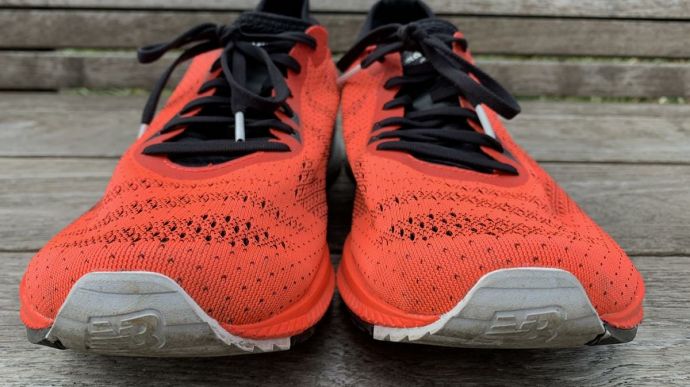 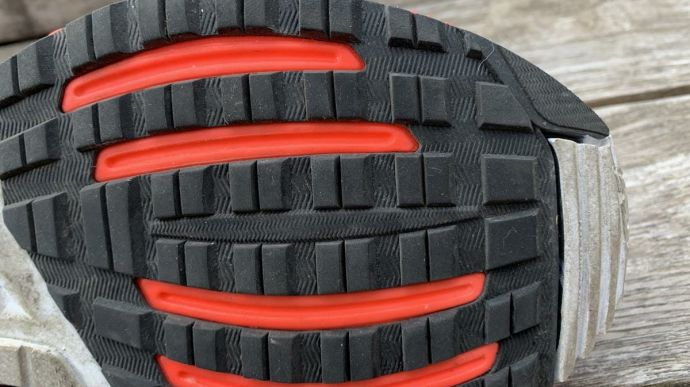 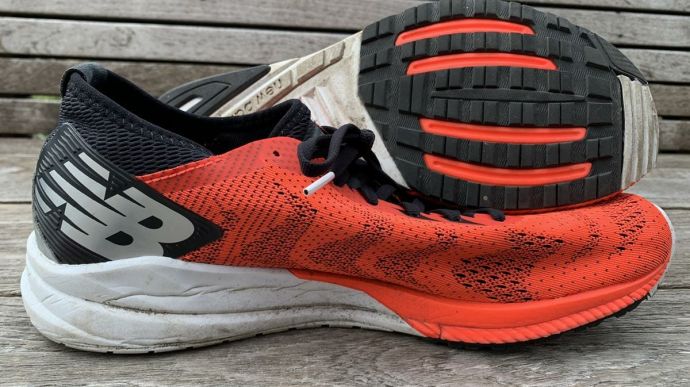 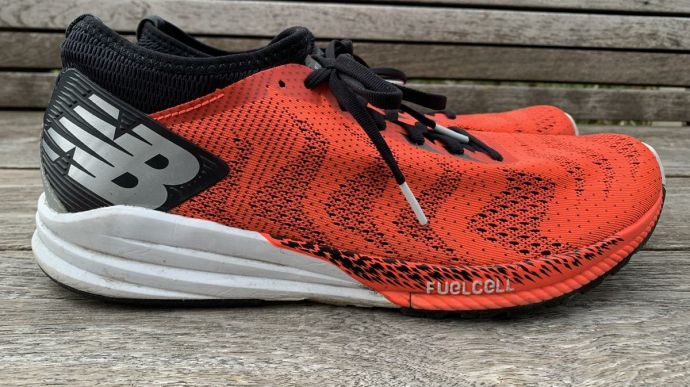 The New Balance FuelCell Impulse is designed for speed. Ideal for forefoot strikers it is a great option for race day, road tempo runs, and track workouts.
WHERE TO BUY
LOWEST PRICE
$119.95
SHOE INFO
New Balance
Brand
FuelCell Impulse
Model
Racing
Type
8.10 oz. (230 gr.)
Weight
119.95 US$
MSRP
6 mm
Heel Drop
Jul / 2018
Release Date
WHO IS IT FOR
The New Balance FuelCell Impulse is for intermediate to advanced forefoot striking runners who are looking for a light and responsive shoe to double as a workout trainer and race day option.
Help me choose

A new offering by New Balance, the FuelCell Impulse, is a lightweight shoe capable of pushing the pace for fast paced training and race day.

Incorporating a bootie-like snug upper, FuelCell in the forefoot and an aggressive launch angle, the Impulse begs for forefoot striking runners to truly push this shoe to its full potential.

New Balance describes the FuelCell Impulse as a competition running shoe however not as a racing flat, like their 1400 and 1500 models.

The main differentiation between the use of the FuelCell Impulse and the 1400 and 1500s comes with the idea that the FuelCell Impusle is useful for road racing as well as more road tempo runs and track workouts.

While the idea as suitable for race and training sounds similar to the Fresh Foam Zante, the FuelCell Impulse is more speed-work and race oriented.

Unboxing the FuelCell Impulse for the first time I was immediately drawn to the features of the shoe that indicate design of speed.

The FuelCell Impulse felt light in my hand, looked sleek, had a pattern in the upper reminiscent of stripes in animal fur and a high toe off.

In fact, turning over the trainer the designers decided to let you know how aggressive of a toe off this shoe has by implementing a note of a 10 degree launch angle.

I could clearly see where the FuelCell cushioning ends between the fore- and midfoot and was intrigued by the double layer mesh bootie upper.

Putting the FuelCell Impulse on for the first time the upper definitely provides a locked-down and snug fit, especially in the midfoot.

During the first run I intentionally tried to feel the difference between a forefoot and mid/heel strike. When pushing off with the front of the foot the Fuel Cell Impulse was very responsive with a flexible feeling under the foot.

With any other strike the FuelCell Impulse reminded me of running in the old New Balance Vazee Pace, a lightweight daily trainer.

The FuelCell Impulse, on a 6mm drop like all New Balance offerings, sits on a midsole and outsole made up of two distinct regions.

In the forefoot is FuelCell, a nitrogen infused TPU cushioning, on top of a rubber outsole with grooves cut in to promote flexibility.

In the midfoot and heel areas is REVlite, the New Balance responsive and durable foam, on top of a more exposed area and reinforced rubber in the heel for durability.

In observing the sole unit of the FuelCell Impulse it is very clear the intention of this shoe. To go fast off of the runner’s forefoot. The midsole and heel almost seem to exist to be solely durable and complementary to the forefoot.

The other highlight of the FuelCell Impulse is the clearly defined high launch angle. Between the angle, forefoot flexibility, and FuelCell cushioning, the forefoot of this shoe makes for an aggressive and responsive ride.

Made up of two layers of a woven mesh, the FuelCell Impulse has an upper unlike any other I’ve run in. The internal layer is a bootie that rides a little high onto the lower ankle area.

The outer layer comes over the top of the foot and locks the runner’s foot in place. This led to a very tight midfoot feeling, especially over the arch, yet was not constricting in the forefoot.

The bootie does not ride as high up the ankle as other “higher bootie” shoes such as the Nike LunarEpic Flyknit did. Thus there was no issues with rubbing on the achilles.

However, due to the nature of the bootie I would not recommend going sockless in the FuelCell Impulse.

On the outside of the heel is a thicker plastic piece containing the New Balance logo. This piece acts as a light and flexible external heel counter.

Though the upper is such a snug fit that the external piece did not feel necessary or functional.

The FuelCell Impulse is a great shoe for forefoot striking runners looking for a fast option. Otherwise, it is just there as a shoe and trainer.

It almost feels as two different shoes depending on how the foot makes contact with the ground. So if you fall in the specific category that aligns with the function of the FuelCell Impulse you should give this trainer a look.

When hitting on the forefoot the ride is smooth and have a nice pop to it. Hitting on any other part of the FuelCell Impulse feels no better than any other lightweight option I’ve worn.

Admittedly I had some reservations about the FuelCell Impulse going in and mostly these reservations were met with pleasant surprise. The aggressive launch angle toe off did not give an overly rocking motion or falling forward feeling.

The upper was not constrictive and made the foot feel locked down. The forefoot felt very responsive and overall the FuelCell Impulse made for a snappy fast feeling.

There was no special pop or feeling from the mid and rearfoot areas. This shoe is not made for runners who strike with their heels, nor is it made for easy and long runs.

The FuelCell Impulse is best served as a tempo, track, and raceday option. It will be good for 5K through Half-Marathon distances.

More advanced runner’s who are looking for a more minimal shoe approach may even use the FuelCell Impulse at the marathon distance on race day.

We purchased a pair of New Balance FuelCell Impulse from runningwarehouse using our own money. This did not influence the outcome of this review, written after running more than 50 miles in them.